The global oil market “is on the one hand positive, we see a recovery of demand and higher global GDP estimates,” Russia’s Deputy Prime Minister Alexander Novak told Rossiya 24 television after the OPEC+ committee’s conference call. Nevertheless, the group must keep monitoring the coronavirus situation across many regions, including Asia, he added.

“We see that some countries record higher coronavirus numbers, like in India and Latin America, which raises some concerns about further growth of demand,” Novak said.

Crude futures held gains after the OPEC+ gathering, trading 0.4% higher at almost $66 a barrel in London.

It was the OPEC+ Joint Ministerial Monitoring Committee that initially recommended sticking to their planned output increase. Ministers from the panel then asked other OPEC+ members to cancel the full meeting scheduled for Wednesday, and instead they drafted Tuesday’s statement by exchanging diplomatic messages.

There is no shortage of oil and there is no mystery about where to find more if it is needed. The drop off in domestic US drilling and the combined efforts of OPEC+ to curtail supply have shaved at least 7 million barrels a day from the market. That has been instrumental in the rebound for oil prices.

It does not mean we are now in an inevitable supply inelasticity market. At some point the cohesion of OPEC will give way to national concerns about budget shortfalls and competition of market share will again become a feature of the market. 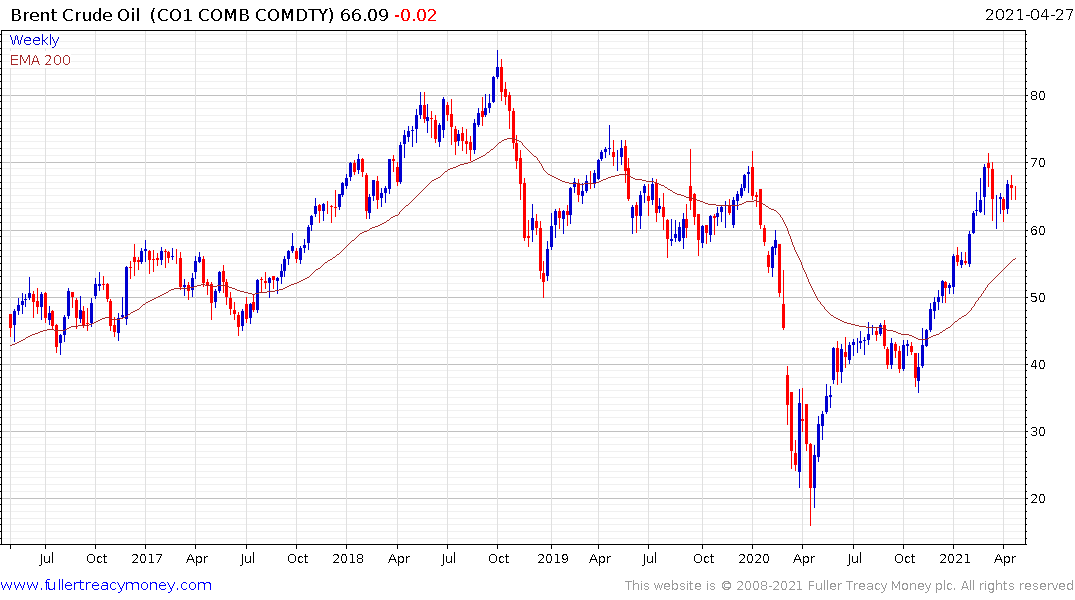 Brent crude oil continues to pause below $70. The price is close to the point where a lot of stranded resources become economic so additional upside from here is dependent on both outsized demand and a supply shock. 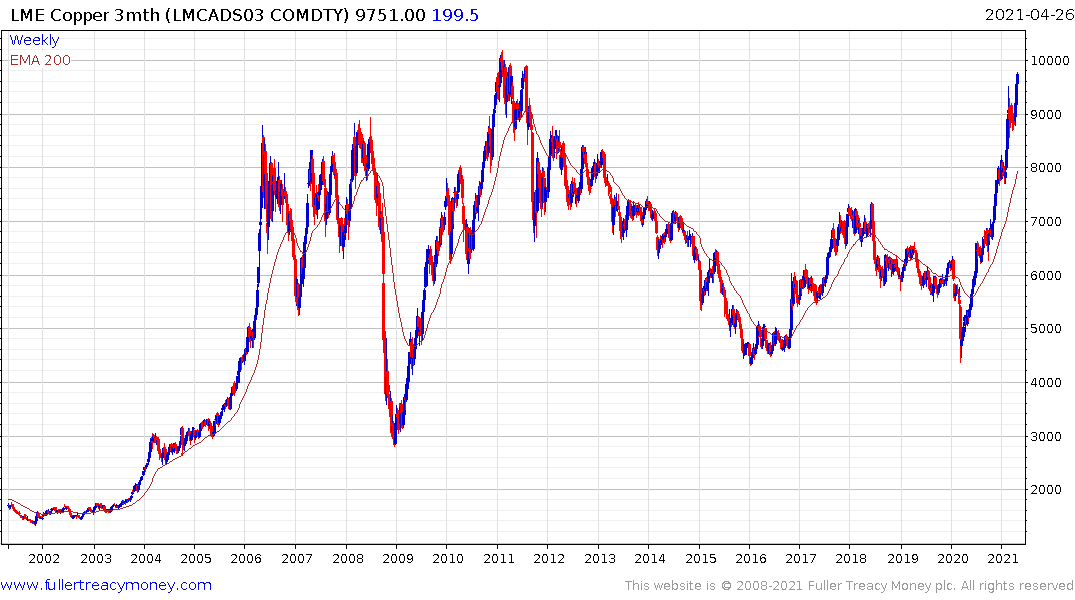 Copper is closing in the psychological $10,000 a ton. That was the terminal point for the big rebound as the world recovered from the credit crisis so it is a logical area where investors will ask “what’s next?”.

Copper’s rebound from the 2020 low is almost identical to the initial rebound from the 2009 lows but took three months less to achieve. On that occasion a meaningful pullback occurred which lasted for six months before a further push on to new all-time highs could be supported. The risk of some additional consolidation in copper is rising. Meanwhile, the Global X Copper Miners ETF is pushing through to new recovery highs. 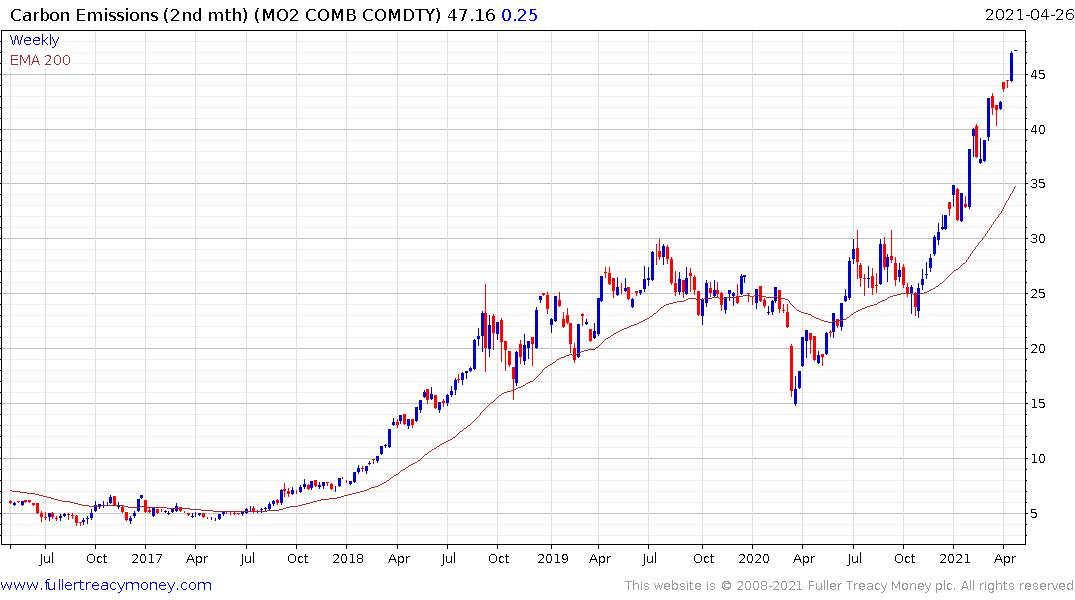 Carbon emissions continue to trend higher. In past cycles oil’s bull markets were considered taxes on consumption because they raised the price of producing almost everything. Today, oil is less of a challenge but the ever-increasing carbon tariff is having the same effect and encouraging substitution. That’s the primary secular argument for investing in copper, it is the enabler for substitution and suggests any pause in the region of the prior peak will be temporary and would represent a favourable entry point. 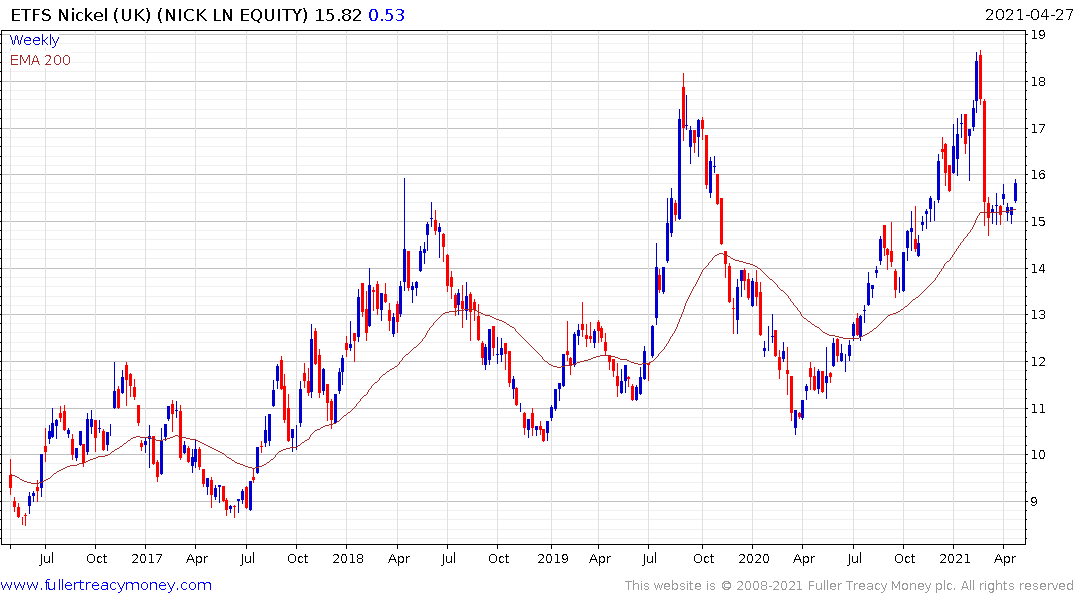 Nickel has rebounded over the last couple of days to confirm near-term support in the region of the trend mean. 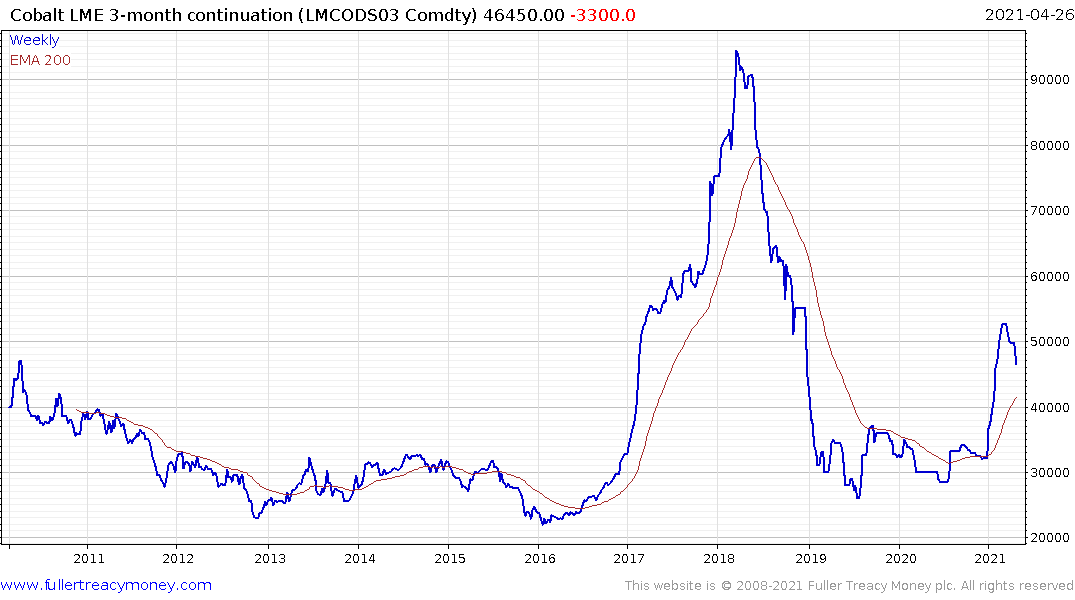 Cobalt pulled back rather sharply yesterday, suggesting a reversion towards the trend mean is underway.