The key inefficiency is intermittency. When winds don’t blow and the sun doesn’t shine, electricity has to be found elsewhere. In July there was so little wind driving the turbines on which Britain depends for a quarter of its power supplies that they operated at less than 5 per cent of their capacity for 314 hours. We’re told that we’ll eventually have battery farms on such a scale storing back-up energy to overcome the intermittency problem with the renewables that will replace fossil fuels. But the figures don’t add up. A friend who has analyzed them tells me that, using reasonable assumptions, to replace the 1,400 Terawatthours of electricity used in the European Union each year and currently coming mainly from natural gas and coal will require battery storage back-up of some 273 million tonnes of batteries. Assuming battery prices continue to fall, that will nevertheless cost say $8.2 trillion – double that taking into account necessary peripherals -- and need about 25 years’ mining of lithium carbonate. And you’d need to replace the entire stack of batteries every few years as their charge holding capacity erodes. As my friend says: These are “insanely prohibitive costs.” Activists argue that the current energy crisis must be used to intensify the transition to renewables. That is, more of one of the root causes of the crisis. More inefficiency, more malinvestment and more demand for relatively scarce materials such as copper.

The willingness of the environmental lobby to drive investment towards renewables remains unabashed particularly as we look at the verbal commitments being made as part of the COP26 discussions. The viability of these commitments rests squarely on developing new battery chemistries that are more efficient, cheaper and less resource intense. It’s a tall order and, even then, will only form part of the wider energy mix. 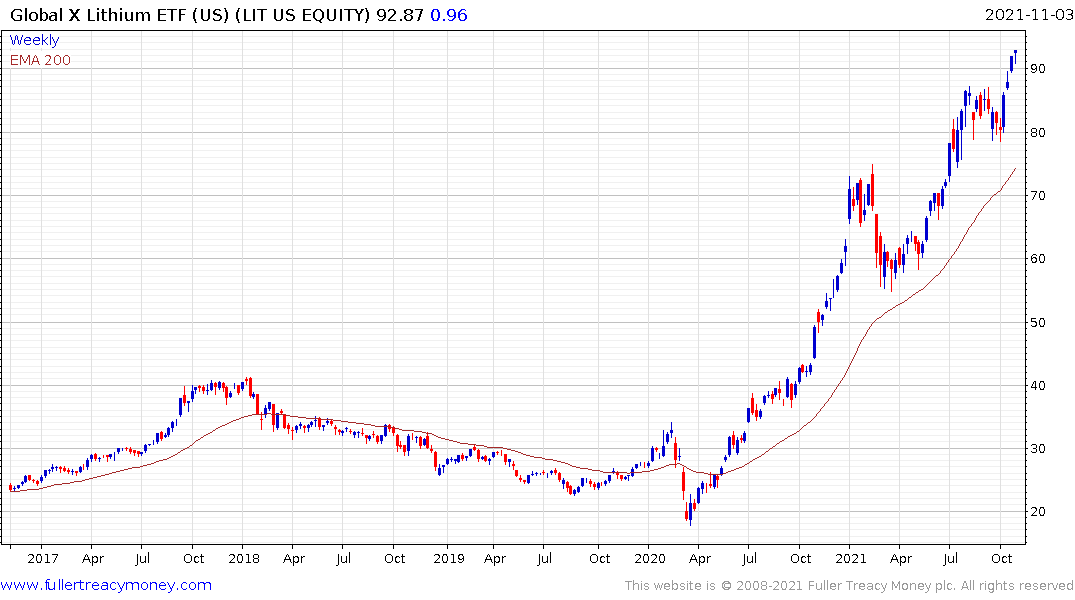 The market for utility scale batteries is quite different from transportation-oriented batteries. The former can be larger and heavier but require many more recharging cycles. Tesla has been building utility-scale batteries but other companies are now also competing in the sector. https://www.power-eng.com/energy-storage/fluence-tesla-top-guidehouse-list-of-top-utility-scale-energy-storage-integration-firms/ 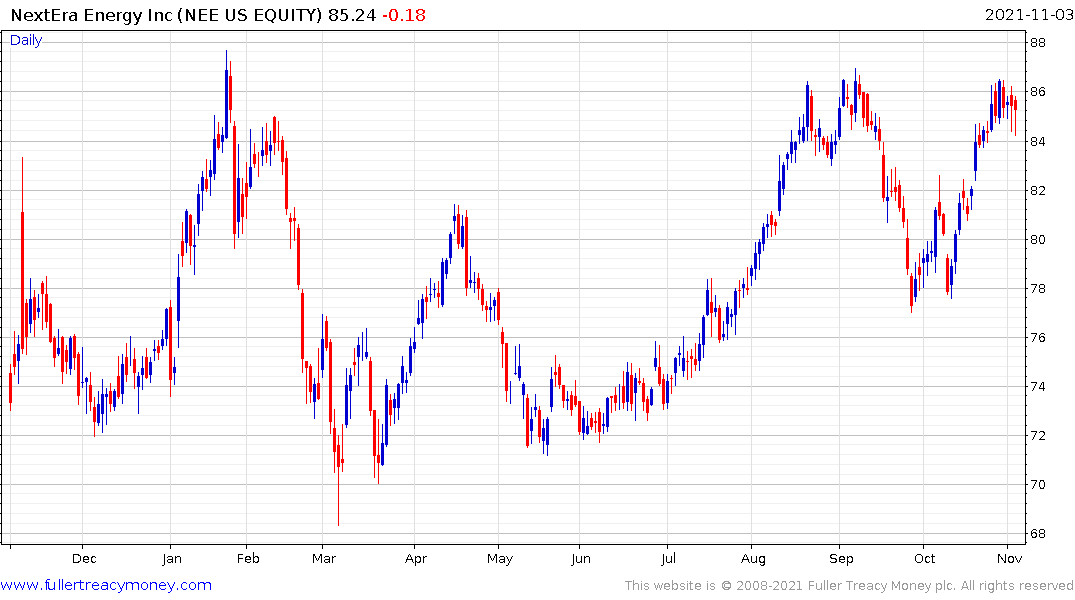 NextEra Energy is also active in the sector as well as owning renewable energy generating infrastructure and nuclear reactors. The share is testing the upper side of its yearlong range and remains in a reasonably consistent uptrend.

All of the excitement in the sector remains focused on transportation because it is such a large potential market. There are even efforts underway to repurpose old EV batteries for utility-like storage.

This article from Barron’s discussing the recent announcement of partnerships in the solid-state battery development space may also be of interest. Here is a section:

SES and Solid Power aren't publicly traded yet, but they are merging with special purpose acquisition companies, or SPACs. Investors that own the SPAC stocks now will own the battery players if the mergers are approved.

Solid state batteries are not designed for power plant back ups but will be most likely represent the next significant iteration of the transportation sector. Toyota had planned to showcase its solid-state battery at the Olympics last year but it still does not have a production ready vehicle for the technology which promises to double the range and shorten the recharging time for batteries.

Decarbonization Plus Acquisition Corp III is currently performing best among the newly active shares in the sector.