Important contributions will also come from other non-OPEC countries, including Brazil, Canada, a resurgent Norway, and newcomer Guyana, which together add another 2.6 mb/d in the next five years. In total, non-OPEC production is set to increase by 6.1 mb/d through to 2024.

Among OPEC countries, only Iraq and the United Arab Emirates have significant plans to increase capacity. These gains have to offset steep losses from Iran and Venezuela, which are subject to sanctions and political or economic turmoil. As a result, OPEC’s effective production capacity falls by 0.4 mb/d by 2024.

Greater US exports to global markets strengthen oil security around the world. Buyers of crude oil, particularly in Asia, where demand is growing fastest, have a wider choice of suppliers. This gives them more operational and trading flexibility, reducing their reliance on traditional, long term supply contracts.

Global trade is not simply a story for the United States. The second-largest increase in crude exports comes from Brazil, which ships an extra 0.8 mb/d of oil by 2024. Following Brazil, Norway is enjoying a renaissance and will overtake Kazakhstan and Kuwait in the next five years a remarkable achievement.

“Unconventional oil and gas are gamechangers for the energy sector” has been a refrain at this service for more than a decade and the full extent of that change is now becoming clear. When we first talked about the USA becoming energy independent it sounded to many like a fanciful view but the country is already an exporter and will reverse decades of imports in the coming couple of years.

That is changing the geopolitical tapestry of the global economy and because when a big customer becomes a competitor is undeniably going to cause friction not least as consumers now have more venues to shop from.

The quantity of oil expected to come to market in coming years represents a significant headwind to price appreciation and will put expensive sources of production like Canada and deep water under pressure. 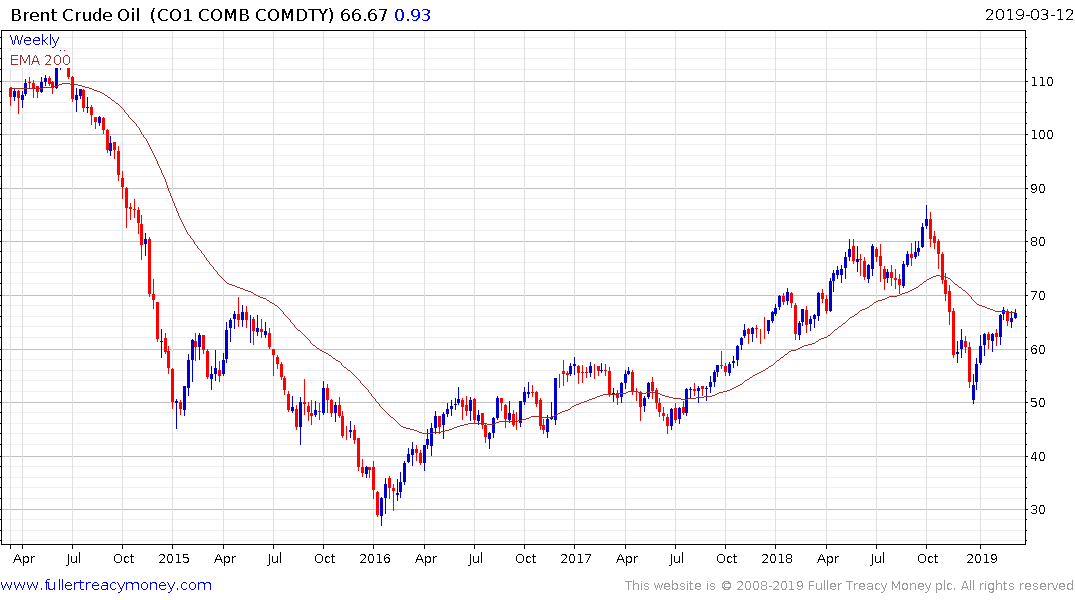 The oil price continues to trend higher from the December low near $50 but medium-term upside is limited considering how much additional supply becomes economic above $80.