Musings from the Oil Patch September 24th 2014 by Eoin Treacy

The IEA’s comment about how remarkable the decline is, suggests that it did not have a grasp of the magnitude of the impact on oil demand from China’s ending the filling of its oil storage tanks during the past few months in response to the country’s growing economic weakness and financial stress. It would appear that the additional cost of this storage oil was too expensive for the Chinese economy and banking system to bear. Additionally, we believe the IEA’s model assumed too generous an estimate for economic growth in Western Europe and North America during the second half of 2014.

Besides the accelerating demand growth against limited non-OPEC supply increase case, the bulls point to the growing cost to find additional oil supplies. They also point to the new dynamic for OPEC, which is the high fiscal cost of their oil output. By “fiscal cost” they mean the price for a barrel of oil that multiplied by the number of annual barrels produced yields income sufficient to cover the cost of running the country’s government. That cost has risen sharply in a number of Middle Eastern and North African countries due to rapidly growing populations (these countries have some of the highest birth rates in the world) and the cost to mitigate social tensions associated with the ethnic struggles (Arab Spring) ongoing within most of these countries – what some of us might call political insurance. A number of analysts have crunched the budget numbers for these countries and created charts such as that below.

What this chart demonstrates is that only Qatar and Kuwait among the OPEC members have fiscal breakeven prices of around $75 a barrel. A substantial volume of OPEC production needs a price somewhere around $100 a barrel for the country to breakeven, while another substantial amount requires prices in the $125 per barrel neighborhood. 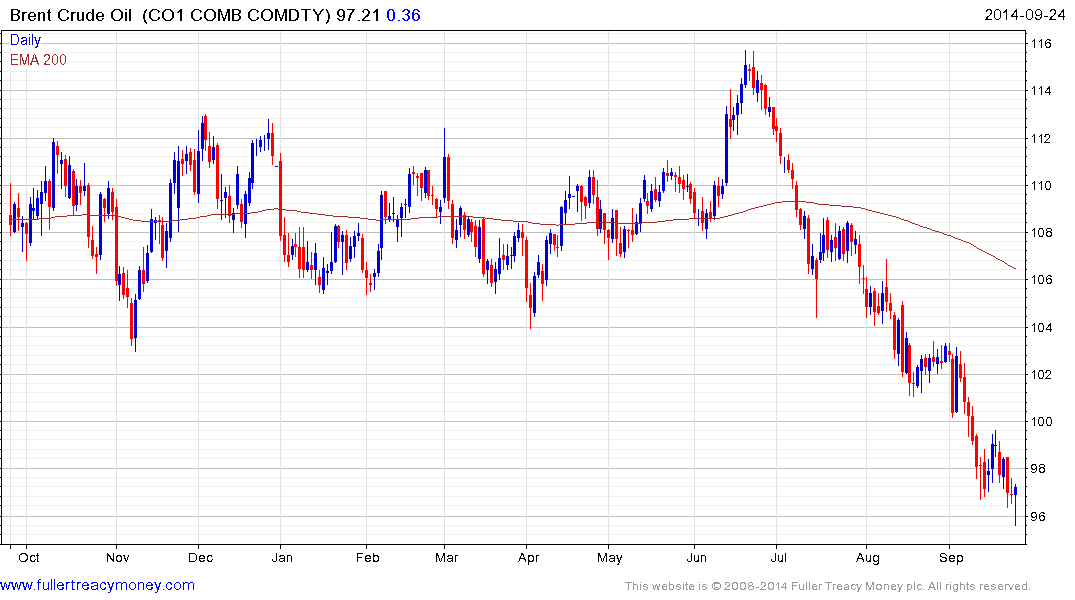 Brent Crude remains in a reasonably consistent step sequence three-month downtrend. A sustained move back above $100 will be required to check momentum and confirm support in the region of the 2012 and 2013 lows. Considering the breakeven for the majority of OPEC producers, in terms of their fiscal commitments, is in the region of $100, any sustained move below $90 will likely require a supply response from Saudi Arabia and others to arrest the decline. 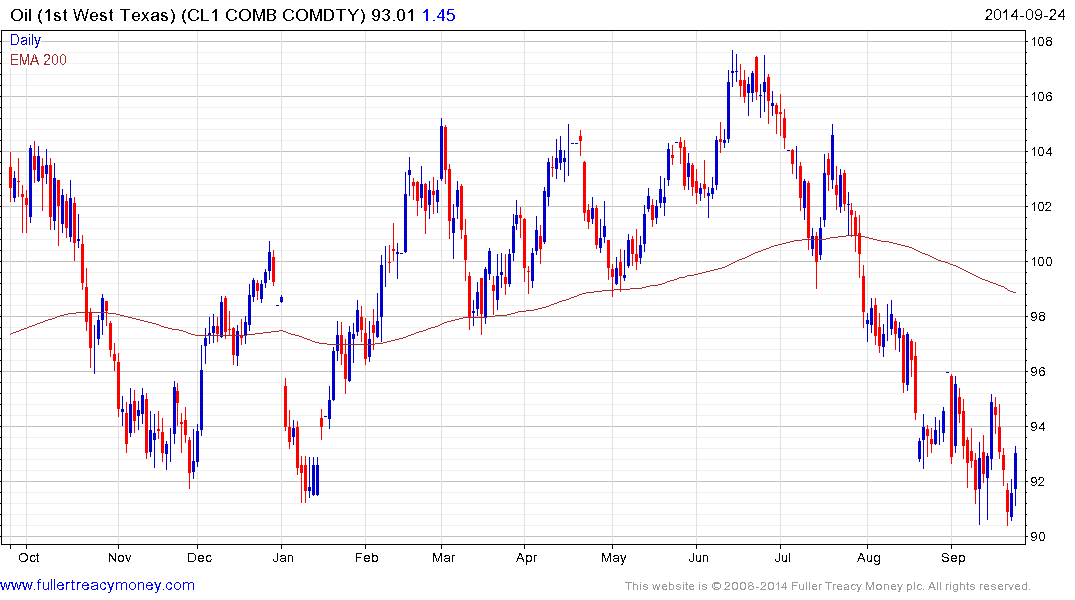 West Texas Intermediate Crude continues to hold in the region of the December and January lows but a sustained move above $95 will be required to signal a return to demand dominance beyond short-term steadying. 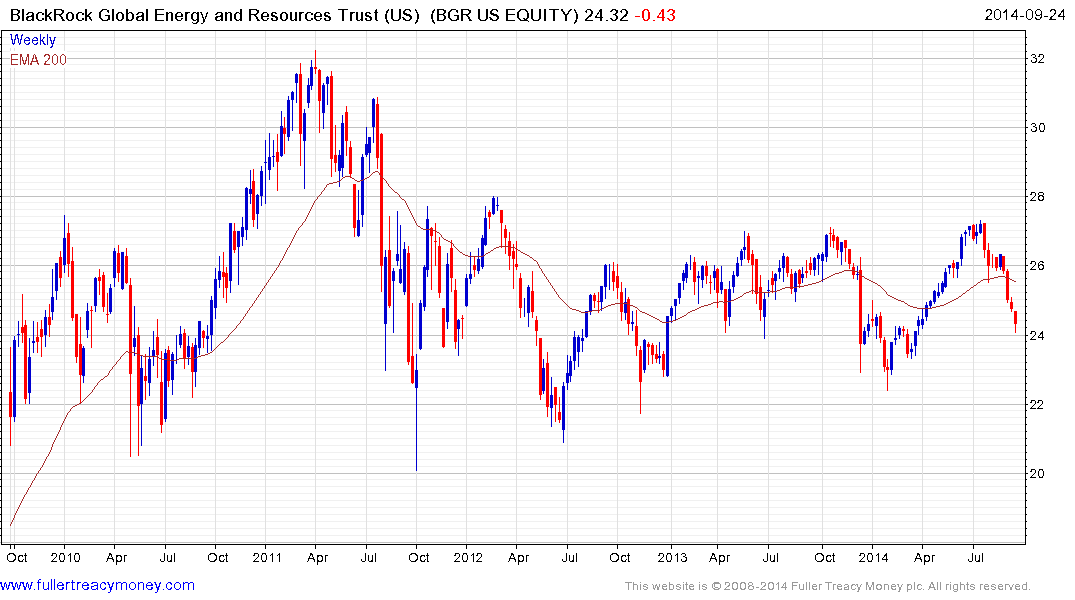 US listed Blackrock Energy and Resources Trust has fallen in tandem with the oil price and is currently trading at a discount to NAV of 11.55% and yields 6.72%. A short-term oversold condition is evident but a clear upward dynamic will be required to signal the return of value investors. 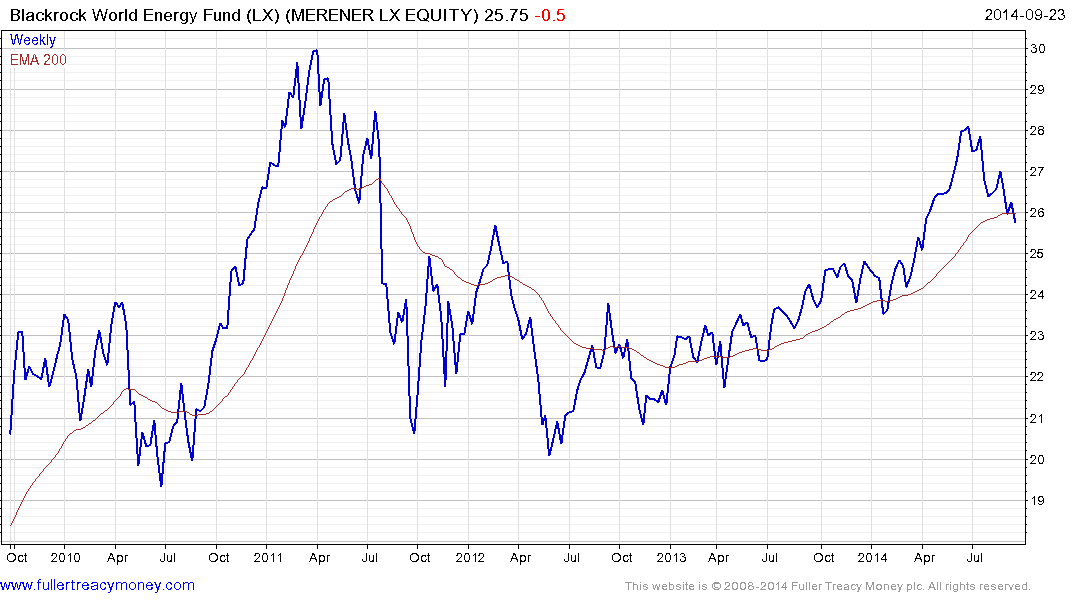 The Luxembourg listed Blackrock World Energy Fund has similar holdings but has not fallen to the same extent. 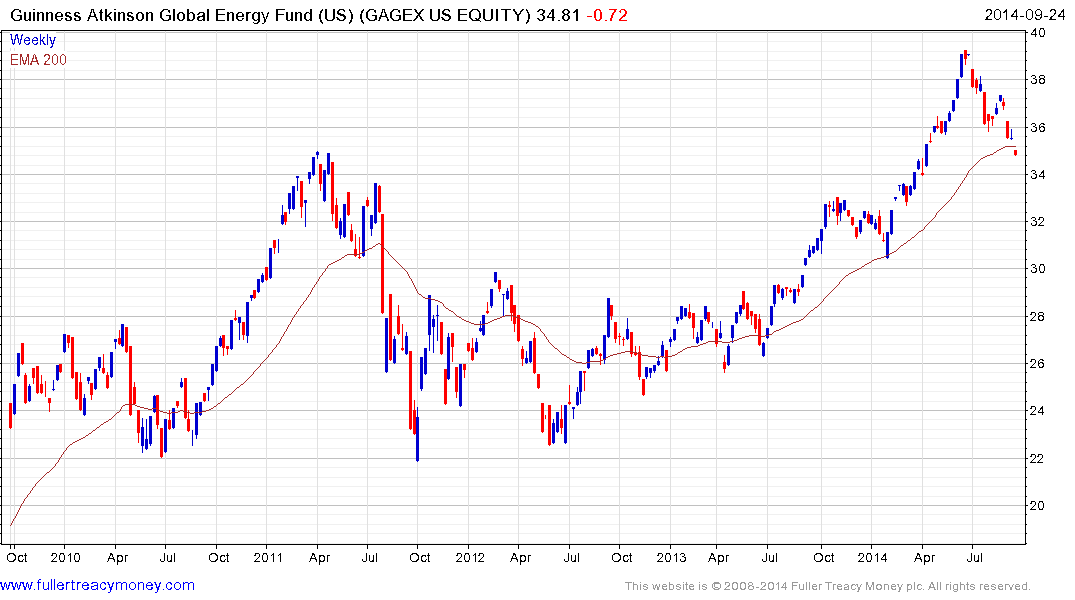 Both the US and Irish listings of the Guinness Global Energy Fund have pulled back to test the region of the 200-day MA where they will need to find support if their respective medium-term uptrends are to remain reasonably consistent.