Musings From The Oil Patch November 7th 2017 by Eoin Treacy

The euphoria that greeted the production cut agreement announcement lifted oil prices above $50 a barrel, a critical threshold for market confidence.  As global oil inventories failed to drop as the market expected, investors turned on the commodity as well as energy stocks, sending their prices lower.  Since the oil price drop in early 2007, prices have largely traded between the low $40s a barrel to now above $54, with a brief excursion as low as $26.  The narrow price range reflected global oil inventories remaining relatively flat, until recently.  As oil inventories started falling a few weeks ago, we are now in a period favorable for higher prices.

Today, we are firmly planted in an oil market reflecting positive price momentum.  Better projected oil demand growth seemed to be the initial factor that helped lift the oil market.  The International Energy Agency (IEA) upped its demand growth estimates for the second half of 2017.  About the same time, U.S. shale producers began shedding oil drilling rigs in response to weakening oil prices and as they sensed a need to rebuild investor confidence in their financial health.  Producers had to dispel the image of exploration and production (E&P) companies as destroyers of capital, a label the industry’s record seemed to warrant.  Disciplined capital spending, meaning living within a company’s cash flow in order to not have to borrow money or sell more equity to fund the overspending, appears to be the new mantra for E&P companies.  The latest survey of E&P company spending plans versus cash flow demonstrates that overspending remains high.  This may signal that it will take time for companies to generate positive cash flow.

In recent weeks, as Brent oil prices have risen at a faster rate than WTI oil, the forward oil price curve moved into backwardation, meaning that barrels of oil able to be delivered immediately are worth more than if they are stored and delivered in the future.  This price disparity is further impacted by the cost of storing the oil.  Backwardation encourages holders of oil in storage to begin selling those barrels, which has accelerated the shrinking of global oil inventories.

Comparing these two futures curves for Brent Crude oil and West Texas Intermediate we see that the backwardation is most acute in Brent while West Texas Intermediate is in contango over the first four contracts. That highlights the continued incentive domestic US suppliers have, to pump and export into the global market; picking up a more than $5 spread in the process. 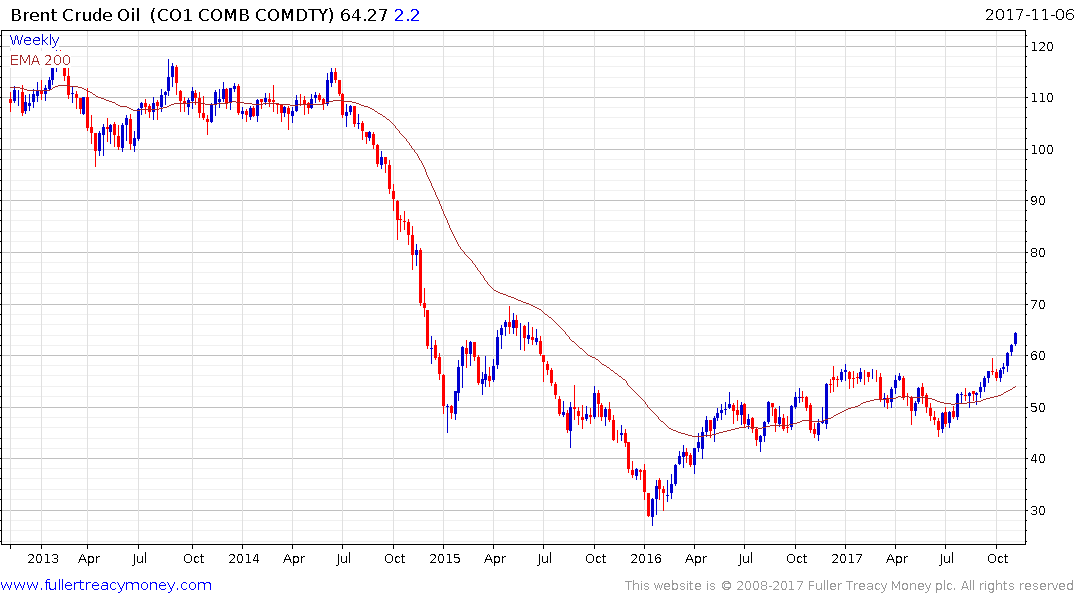 Brent Crude’s break above $60 relieves pressure from some of the higher priced producers which have struggled to perform over the last few years. It also removes a headwind from some of the renewable energy companies since they tend to perform better in a higher oil price environment. 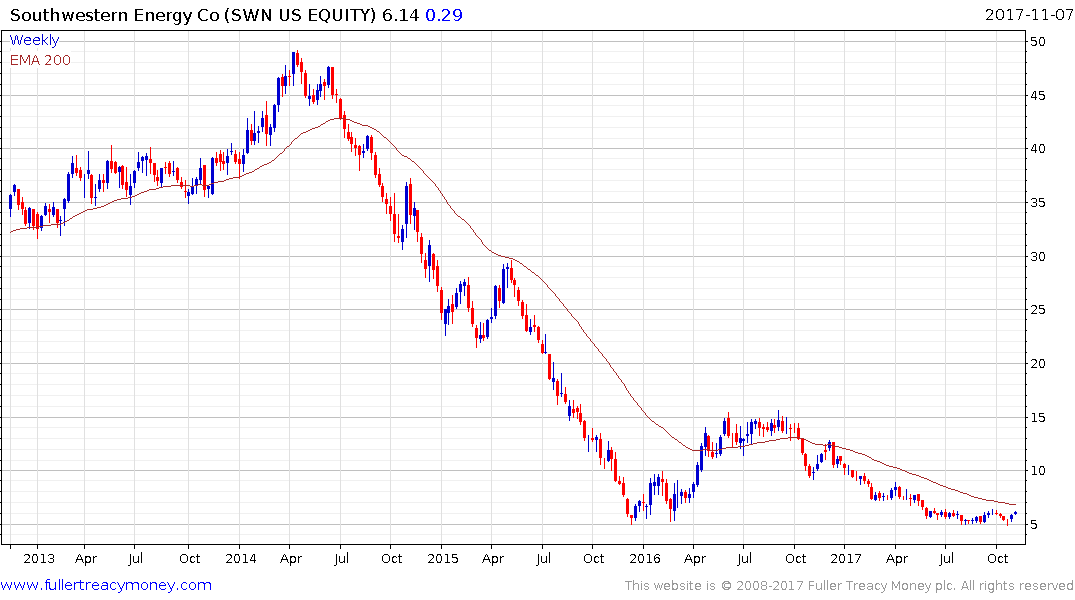 Southwestern Energy has been ranging in the region of the late 2015 low for the last few months and is now testing the upper side and the region of the trend mean. A sustained move above $6.30 would confirm a return to demand dominance beyond short-term steadying. 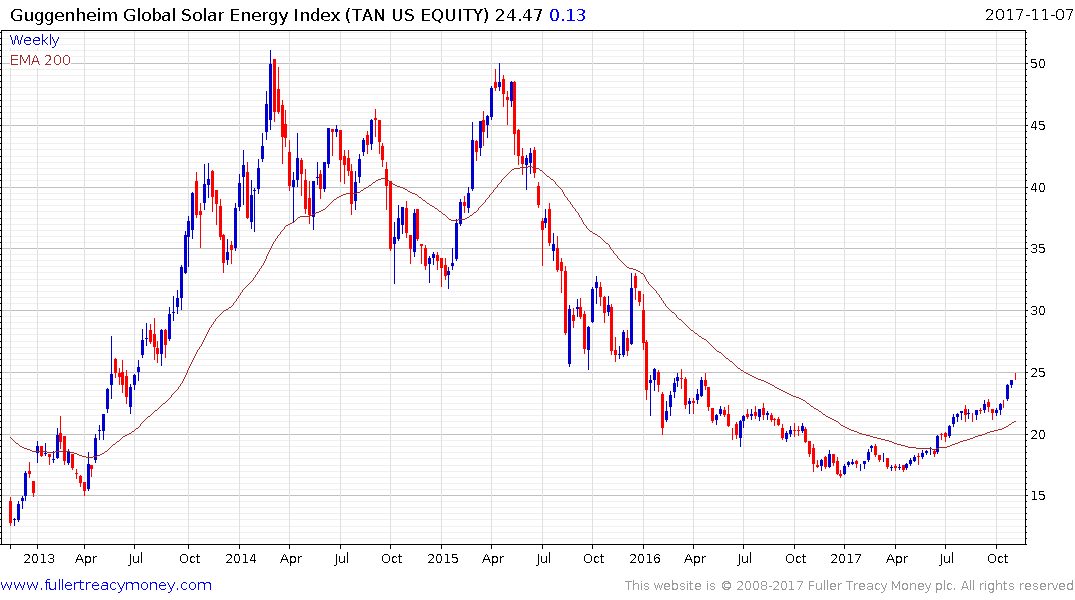 The Guggenheim Solar ETF has exhibited a rounding characteristic consistent with accumulation for most of this year and continues to hold a progression of higher reaction lows. 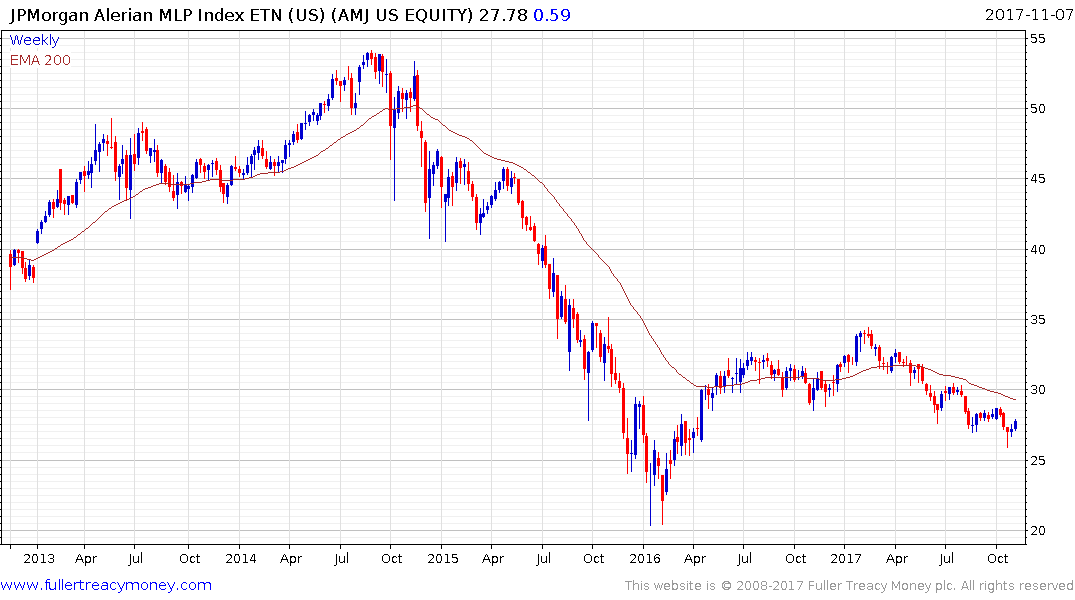 The JPMorgan Alerian MLP ETF has been trending lower all year and is now rallying to challenge the progression of lower rally highs. A sustained move above $29 would confirm a change of trend. 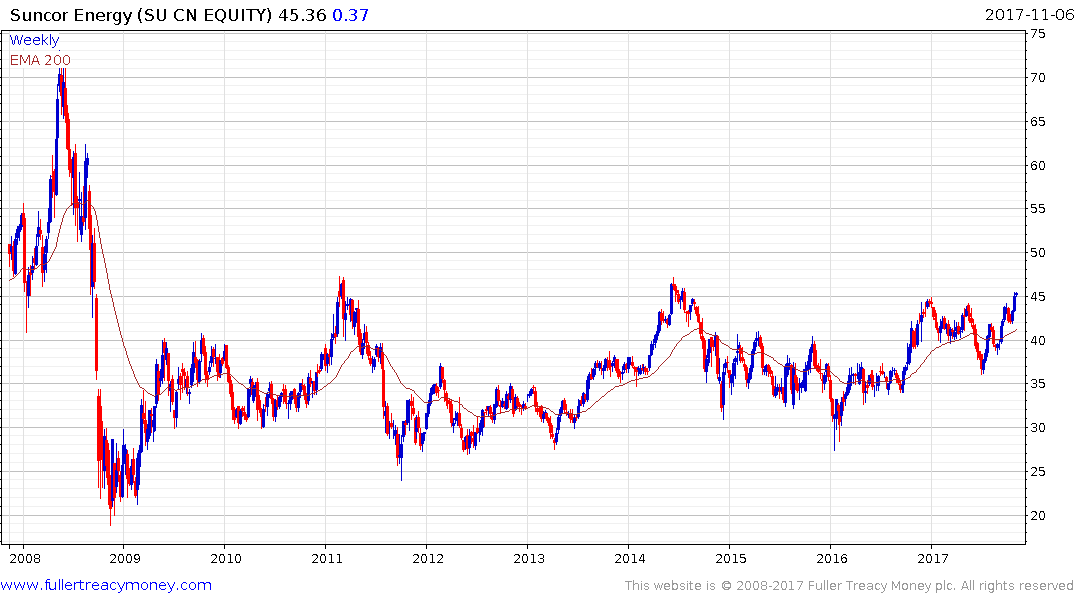 Canada’s Suncor Energy is testing the upper side of a six-year base formation.

The recovery potential of the above shares is tied to Brent Crude holding the break above $60. A great deal of additional supply becomes economic above that level as evidenced by the return to form of these relatively high cost producers. Therefore, demand will need to continue to recover while geopolitical issues will need to continue to deteriorate if higher prices are to be sustained beyond the short term.