Musings from the Oil Patch November 4th 2014 by Eoin Treacy

The other factor in play now is TransCanada’s plan to ship Canadian oil sands output east from Alberta to the Irving Company refinery and its oil export port in Saint John, New Brunswick. TransCanada formally submitted its 30,000-page application for the 1.1 million-barrel-a-day project, labeled Energy East, to Canada’s regulator, National Energy Board. Once in place, oil sands output could move from Alberta to the East Coast and then be loaded on ships and transported to the U.S. Gulf Coast refining complex for only a couple of dollars more than the proposed tariff to ship it to Texas on Keystone. In a low oil price environment, that cost might be considered an impediment to oil sands export, but it doesn’t appear to represent a significant economic hurdle. As a result, the environmental movement’s argument that by preventing Keystone from being built would prevent Canada from expanding its oil sands business and stepping up its exports would be severely weakened. Energy East requires no U.S. approvals, although it does need Canadian federal government ok and approvals from various provinces. Our understanding is that TransCanada has worked hard to win over those people with rational objections to the pipeline route by relocating the route and adding spurs to refineries in the provinces and export ports. We anticipate Energy East having an easier time winning approval than Keystone has experienced.

We have learned several things from watching the battle over Keystone. The view that environmental politics overwhelms energy economics when the country is governed by the left was reinforced. Additionally, while pipelines represent the safest mode of oil transportation, the recent string of oil leaks from old pipelines has battered that safety image. The spills strengthened the hand of the environmentalists battling Keystone and the images of black oil oozing through people’s backyards, neighborhood streets and bubbling streams is a powerful weapon against the energy business, and the energy companies have not been proactive in trying to change their image. The environmentalists have demonstrated that they have learned how to fight energy projects more effectively through the regulatory and legal systems. Lastly, low oil prices, should they continue for any duration, will disrupt the pace of development of the oil sands – just how much and exactly when remain uncertain – and possibly change the impetus for either or both Keystone and Energy East. In the end, oil sands output will reach markets, but where those markets are may be different

It is in Canada’s national interest to develop an export avenue for its crude oil. Since it has met with such stiff resistance to the Keystone pipeline, exporting via its Eastern border represents the next best thing. With Russian supplies now representing a risk for European refineries there is the possibility that Canadian supply will have more than one market rather than having to depend on demand from the US gulf coast. This may be part of the reason Saudi Arabia has been so keen to preserve its European market share by offering discounts. 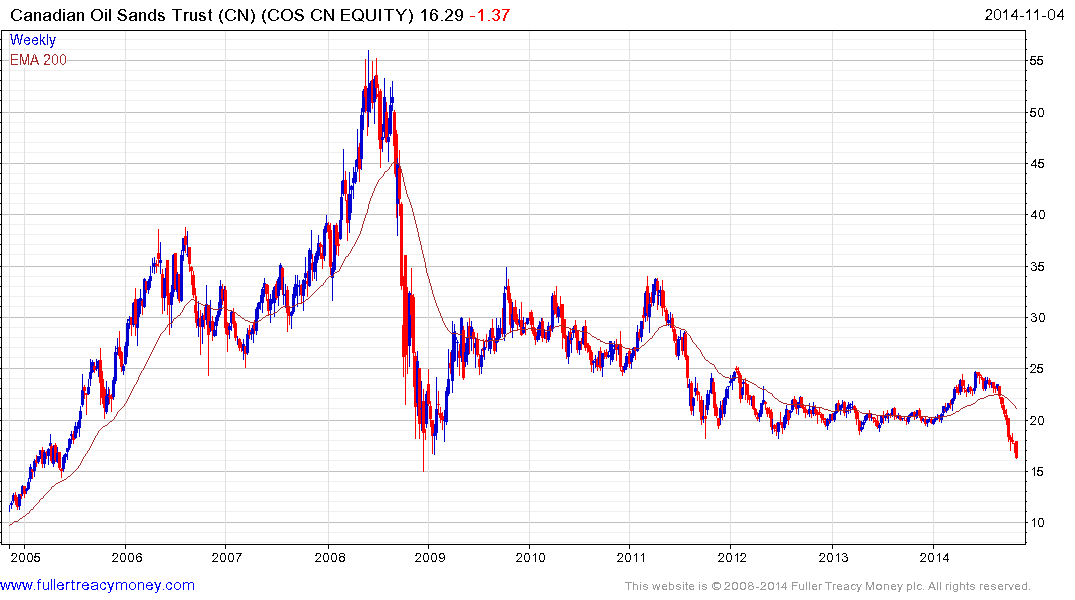 Canada Oil Sands Trust continues to fall towards the 2008 lows near $15. While oversold in the short term, a clear upward dynamic would be required to check the decline and pressure shorts.
Canada’s oil sands production isn’t the only source of production under pressure from falling prices. 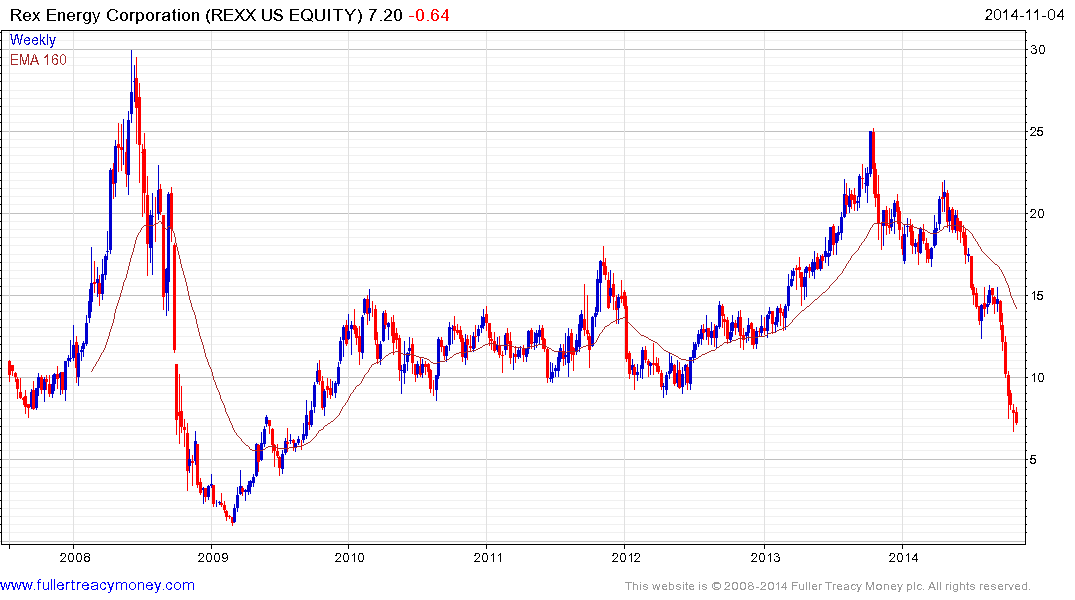 Companies that had to pay up for acreage are heavily dependent on high oil prices for profitability. Rex Energy had been among the better performing shale oil companies when prices were comparatively high but has accelerated lower of late.