Musings From The Oil Patch March 8th 2016 by Eoin Treacy

It is our belief that this dramatically altered long-term outlook for petroleum is at the heart of the Saudi Arabian oil strategy. High oil prices have hurt demand growth prospects while at the same time encouraging the development of high-cost, long-lived petroleum resources. These high oil prices have provided an umbrella for expensive alternative energy sources and, given the global embrace of climate change and anti-fossil fuel policies and mandates, made petroleum’s long-term outlook even less rosy. In the U.S. where producers could sell everything they produced, few gave any thought to the shifting demand outlook globally and the role that domestic production growth would play in altering that outlook.

Recognizing that the outlook for petroleum demand is lower requires a mindset change for oil company CEOs; something we sense is just now beginning to sink in. While oil CEOs talk about lowered production growth forecasts as a result of low oil prices and the forced reductions in their capital spending plans, recognition that there are substantial low-cost oil reserves in the world held by countries desperate for income is beginning to resonate. Zero production growth in a declining demand business may not be the worst outcome for oil companies. Without production volume growth, maximizing profitability becomes even more important. Determining how to organize and manage a company in this new black-swan-world of shrinking oil demand will be the real challenge.

I have not previously seen historic figures for how expectations of demand growth have inflated over the last decade. We know that China’s booming steel industry encouraged new mines to open and existing iron-ore miners to increase supply. The exact same thing happened in the energy market and the problem now is that those demand growth forecasts have to be recast in the light of China’s moderating growth rate and the increasingly efficient use of energy on a global basis.

This energy cycle is unlike any of that have gone before because new sources of supply that are independent of extraction are now emerging. Our economy is based on growth and that growth requires energy. However energy does not have to be oil-based and that is clearly different from any boom to bust cycle in living memory. 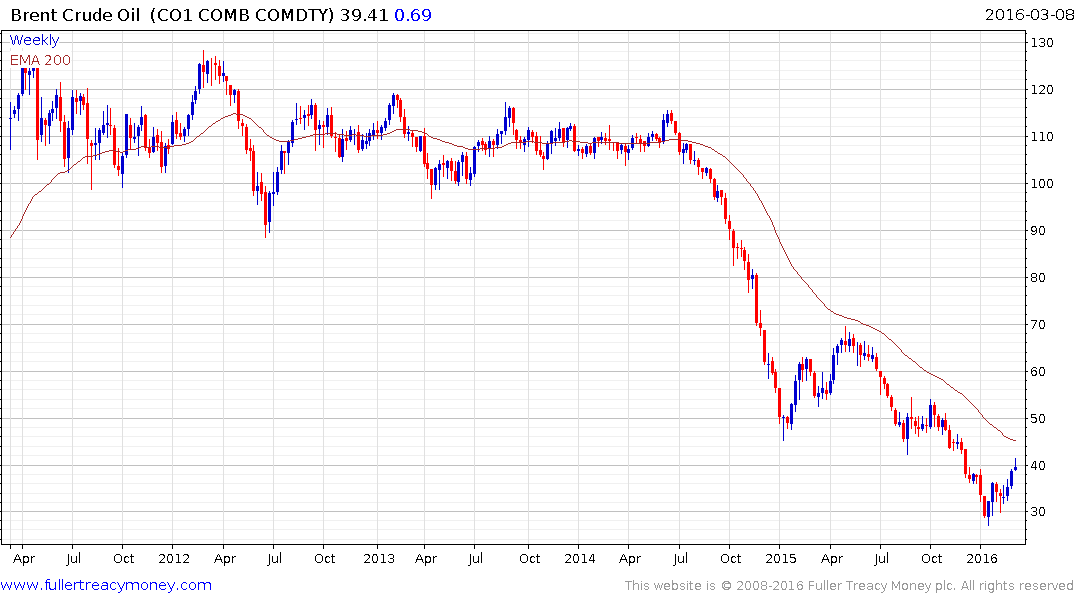 We can conservatively estimate that prices need to be between $50 and $60 to encourage new supply back into the market and the prices are uneconomic for all but the most established producers in the mid $25 area. Brent crude rallied for eight of the last ten sessions and has unwound the majority of the oversold condition relative to the trend mean. The first reaction following the rebound from the January low was approximately $6.50. Today’s high was around $41.50 so a decline to $35 would represent an orderly pullback and the rebound could still be considered intact. A sustained move above the MA will be required to break the medium-term downtrend and to indicate a return to demand dominance beyond short covering. 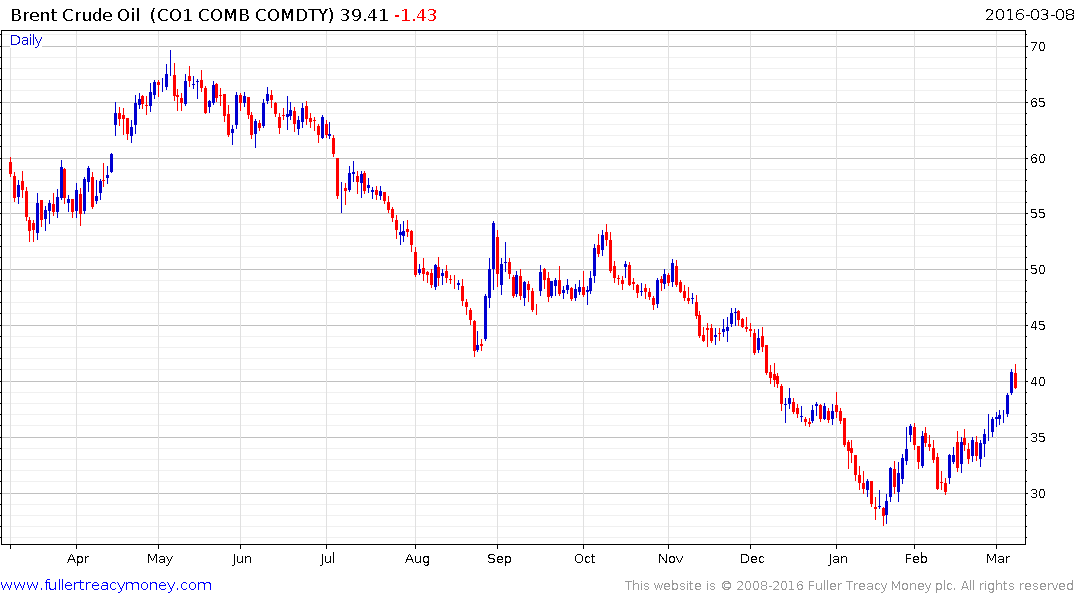