Musings From the Oil Patch June 20th 2017 by Eoin Treacy

At the same time, U.S. oil output continues growing in response to the increase in the number of working drilling rigs. As a result, the International Energy Agency (IEA) is projecting that U.S. oil output will grow by almost 5% on average this year, and by nearly 8% in 2018, overwhelming projected demand growth and re-establishing the glut environment. This forecast is creating concern about the success of OPEC’s strategy of cutting its output. The pessimistic view of crude oil prices rests on the belief that the slow pace in reducing oil inventories will create an environment where cheating on production cuts occurs, making it impossible for demand growth alone to drive oil prices higher. The optimists, including OPEC, believe that its strategy is working, it will merely need more time – hence the nine-month extension rather than a six-month one.

What we know is that the lift in oil prices sparked a drilling rig recovery in 2016, which has continued into 2017, and has become the fastest industry recovery in history. Although the recovery has been the fastest, it has yet to reach the levels of the recoveries of 1979 and 2009. The current weakening of crude oil prices is likely to cut short this rig recovery below the levels reached in those earlier recoveries, unless something else is at work in the oil patch.

Something interesting has occurred in the oil market as prices have declined almost $10 over the last month. When the front month price was close to the $60 in January the spread between it and the two-year future was about $1. Now it’s closer to $4.

At $60 a great deal of unconventional oil is economic to produce so it makes sense for companies to lock in prices as close to that level as possible. With the price now at $46 there is less demand for hedges so the spread is widening out again. One of the reasons prices are so weak is because with hedges locked in there is very little risk in producing even in a falling price environment. That is of course until the hedges run out which could take another year or more.

If US supply is therefore less affected by the decline, then either demand will need to pick up, weather will need to impact supply, geopolitics will need to become a factor or OPEC will need to be more aggressive in their supply cuts to pressure shorts. 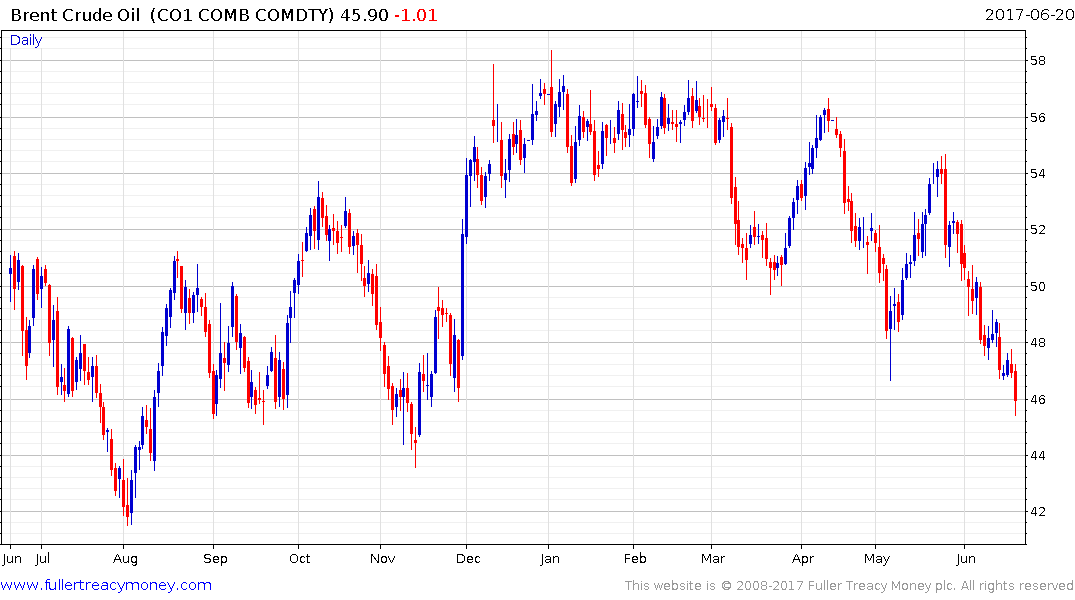 A short-term oversold condition is now evident following five consecutive weeks on the downside. However a break in the short-term progression of lower rally highs will be required to check the downtrend and signal a return to demand dominance.