Musings from the Oil Patch June 1st 2016 by Eoin Treacy

The new topic being opened by efforts such as Otto and the platooning demonstration in Europe is the impact on fuel and labor costs within the trucking industry. In the United States, trucks drive 5.6% of all vehicle miles and are responsible for 9.5% of highway fatalities, according to Department of Transportation data. Because heavy-duty trucks have a significantly lower fuel-efficiency performance, they account for a larger share of diesel fuel consumption than diesel cars or other types of equipment. Because diesel fuel is included in distillates, we cannot determine the exact weekly volumes. However, we know that for the week ending May 20, distillate volumes of slightly over 4 million barrels a day represented 20% of total fuel supplied in the U.S. By examining the latest inventory data, distillates are broken down by the amount of sulfur in the fuel. Diesel fuel for vehicle use needs to be low sulfur – 15 parts per million or less. That fuel category accounted for 88% of all the distillate in storage, therefore we would think this is a reasonably close approximation of the highway quality diesel fuel being supplied to the U.S. market. If 62% is used by over-the-highway trucks, then the daily consumption is approximately 2.2 million barrels. Improved fuel savings from autonomous technology could eventually account for upwards of 200,000 barrels a day in savings.

Autonomous vehicle technology is being hailed as a way to reduce the number of accidents. The largest impact of the technology, however, may be on the employment of truck drivers. There are more than three million truck drivers in this country. According to the American Trucking Associations, the truck industry accounts for one of every 15 jobs in the United States. By eliminating the need for second drivers on many trucks due to the ability of the primary driver to fulfill his rest obligations while the truck drives itself, there will be a negative employment impact from autonomous technology.

Although perceived as a negative, autonomous technology might actually become a positive as the trucking industry deals with an aging workforce and a less-than-attractive employment career as long-haul driving can be tedious and keeps drivers away from home for extended time periods. While younger drivers enjoy the first and last miles of truck driving, they wish to avoid the boring portion, which autonomous technology would eliminate. In the U.S., according to consultant Oliver Wyman, by 2023 it is projected that there will be shortfall of 240,000 drivers, or approximately 8% of the estimated current number of truck drivers.

Another impact of autonomous technology for trucks is that vehicles can be kept on the highway for more hours per day. That could not only reduce the need for additional drivers, but it could also reduce the cost for transporting goods, further contributing to deflationary forces in the economy.

All of these considerations influenced our previous article’s conclusion that autonomous trucks were more likely to be on the roads before autonomous cars. That may be why Mr. Levandowski left Google. He said that his decision to leave was motivated by being eager to commercialize a self-driving vehicle as quickly as possible. At Google, he was responsible for drafting legislation to permit self-driving vehicles, which ultimately became law in Nevada. While certain states such as California have motor vehicle regulations that would prohibit the idea of trucks traveling on the freeway with only a sleeping driver in the cab, other states currently do allow it. “Right now, if you want to drive across Texas with nobody at the wheel, you’re 100 percent legal,” said Mr. Levandowski. Stay tuned for self-driving trucks on a freeway near you.

The technology behind autonomous vehicles is progressing towards greater utility and it makes sense that haulage vehicles represent the primary source of demand considering the high cost of fuel, personnel and regulations. It represents an additional example of the deflationary role technology has and the benefits that accrue to consumers as a result. 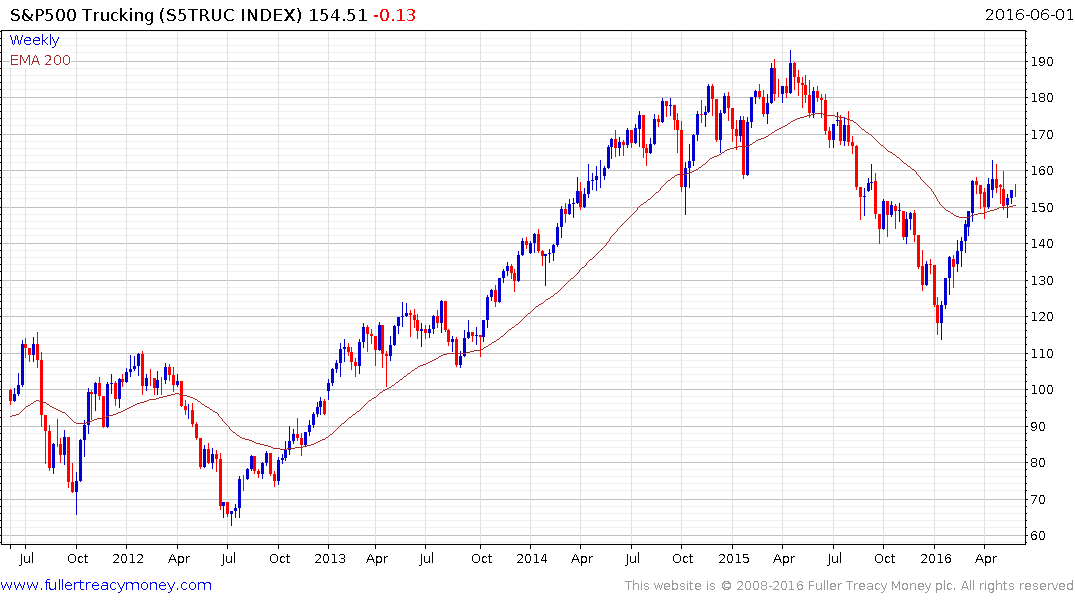 The S&P500 Trucking Index has been ranging mostly above the 200-day MA since March and a sustained move below 146 would be required to question medium-term scope for continued higher to lateral ranging.