Musings from the Oil Patch July 16th 2019 by Eoin Treacy

What is most important about the Institute’s climate model was its near perfect replication of the temperature history of 1861-2013.  Projected into the future, the Institute’s model projects an unalarming temperature increase to 2100 of 1.4C (2.52 F).  Note that the Institute’s projection falls below the 1.5C increase environmentalists say is necessary to keep the planet from selfdestruction.  That target can be met without upending our entire economic system and how it is powered.

The Institute’s temperature forecast is well below those produced from the climate models utilized by the IPCC, which in some cases are as much as five times greater.  The criticism of climate models is that they are biased to the warm side.  An interesting chart shows the temperatures from climate models attempting to recreate actual temperatures at various elevations of the atmosphere for 1979-2010.  The chart shows that the models always exceed the actual observations when they rely on CO2 as the forcing mechanism.  Without CO2, the models come much closer to replicating temperature history, demonstrating the warming bias of the carbon emissions thesis.

Understanding that natural variables are more important in explaining our temperature history is important since such a climate model projects a smaller temperature increase.  This goes against the preconceived basis for founding the IPCC, and weakens the attack on fossil fuels.  The Institute’s climate model results suggest that adaptive steps, more fuel-efficient vehicles, equipment and appliances, as well as increased use of cleaner fossil fuels could be a more palatable and less costly route for the global economy than draconian plans such as the Green New Deal.

Guilt is one of the most powerful of human emotions. When we fail it is because we did something wrong and need to atone for our sins. When we succeed it is happenstance and we don’t deserve the rewards we have received. This latter point is particularly relevant for people who become much more successful than they had initially expected, and even more so if there is a wide difference in performance relative to their kin or community.

It is difficult to look around at the world today and not conclude we are lucky to be living when we are. Living standards have never been higher, even if the division of rewards is up for debate and billions of people have been lifted out of poverty and into the middle classes. Nevertheless, some of us live in much better conditions that people in other countries and it is easy to think that is a mistake of birth. The follow emotion is we need to do something to make up for our better condition. In fact, we need to pay for our relative position. Climate arguments slide comfortably into this emotional conflict.

It’s the emotionality of the argument that sets me on edge but it also ensures that we are going to end up paying one way or another. Carbon credits are a manufactured market specifically designed as a toll on economic activity.  They are designed to rise in value over time and if they do not, then the rules will be changed. 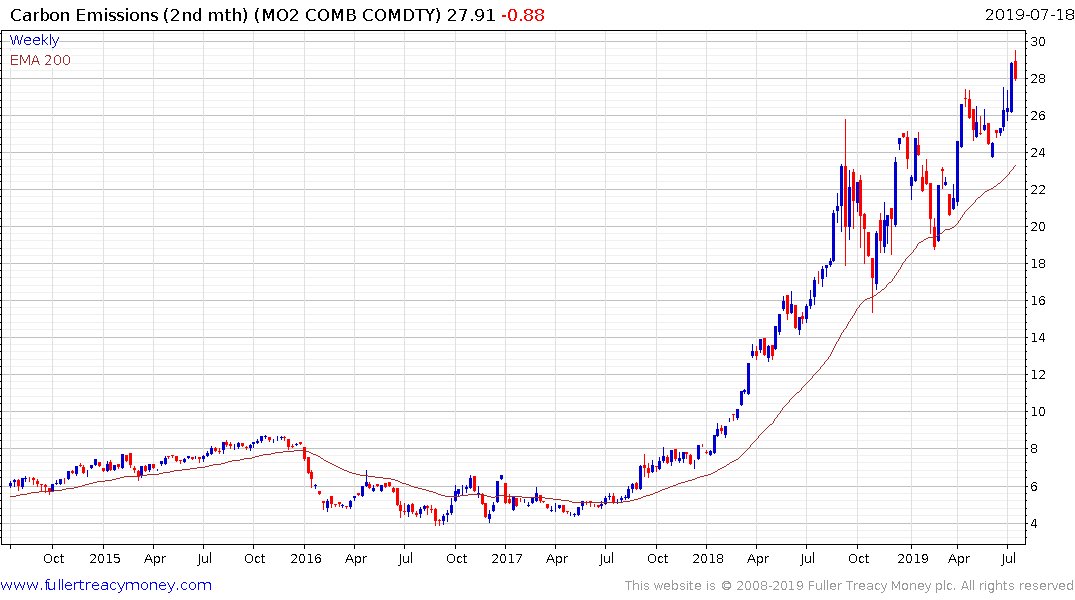 Carbon emissions futures have been trending higher in a jerky manner and a reversion back towards the mean is currently underway.