Musings From the Oil Patch January 26th 2016 by Eoin Treacy

With oil prices dropping and E&P companies cutting their spending, the answer to our question of what is the sound of another shoe dropping is becoming clear. It is the sound of pink slips landing on employees’ desks. Living within one’s cash flow has taken on greater meaning for companies today. Unfortunately, the major operating costs are employees, especially when there isn’t much to do. Reducing costs to stay within cash flow means laying-off employees. Last Thursday afternoon, Houston and the oil patch were shocked by Southwestern Energy’s (SWN-NYSE) announcement that it was terminating 1,100 employees, or 44% of its labor force, as it deals with low oil and gas prices. The third largest natural gas producer indicated it had no drilling rigs operating and was reducing its capital spending plans for the year.

The next day, leading oilfield service provider Schlumberger Ltd. (SLB-NYSE) announced plans to reduce its workforce by 10,000 in response to low commodity prices and low oilfield activity. Since the third quarter of 2014, Schlumberger has cut 34,000 employees, representing 26% of its workforce. The company also stated in its fourth quarter earnings release that it doesn’t see an increase in oilfield activity until 2017. This view is rapidly being embraced by the industry and shaping all staffing and capital spending decisions.

Leading forecasting groups – the International Energy Agency, OPEC, IHS, Wood Mackenzie – are embracing the view that the current low oil prices will force the industry to further cut its activity during the first half of 2016 and that natural attrition in production will drop global oil supplies, despite the addition of possibly 300,000-500,000 barrels a day of oil exports from Iran this year. These groups also see demand continuing to grow, although uncertainty about the health of the Chinese economy is becoming a significant wildcard in the forecasts. On balance, these forecasters see the imbalance of global oil supply and demand, which has existed for the past two years, will return to a more balanced condition by the second half of 2016. A balanced market will allow bloated global petroleum inventories to start shrinking, which sets the stage for higher oil prices in the third and fourth quarters of 2016 and still higher prices in 2017. It will be the combination of continued oil demand growth, matched by a stable supply outlook and declining inventories, that drives an upturn in oilfield activity in the first half of 2017. The challenge for the energy industry will be getting back those employees receiving pink slips now.

Interestingly enough, the massive layoffs of the 1980's have not YET repeated themselves in the Texas Panhandle, where vast numbers of conventional wells continue to pump. One specialist contractor in drilling supervision said (to my brother over the weekend) that he was still as busy as he could handle, and my nephew just hired on to a drilling company as a roustabout. Interesting anecdotal information - not perhaps strongly suggestive of anything in particular, of course.

Oil prices have hit at least a near-term bottom amid some of the most bearish commentary on the commodity sector I have seen. If we cast our minds back to the depths of the financial crisis the outlook for energy was not this bearish, at least to my memory. This service has been cautious about energy prices for a number years but at today’s levels it is hardly advisable to become increasingly bearish. The stress energy companies and energy countries are under is palpable and the largest employers have been aggressively laying off workers. 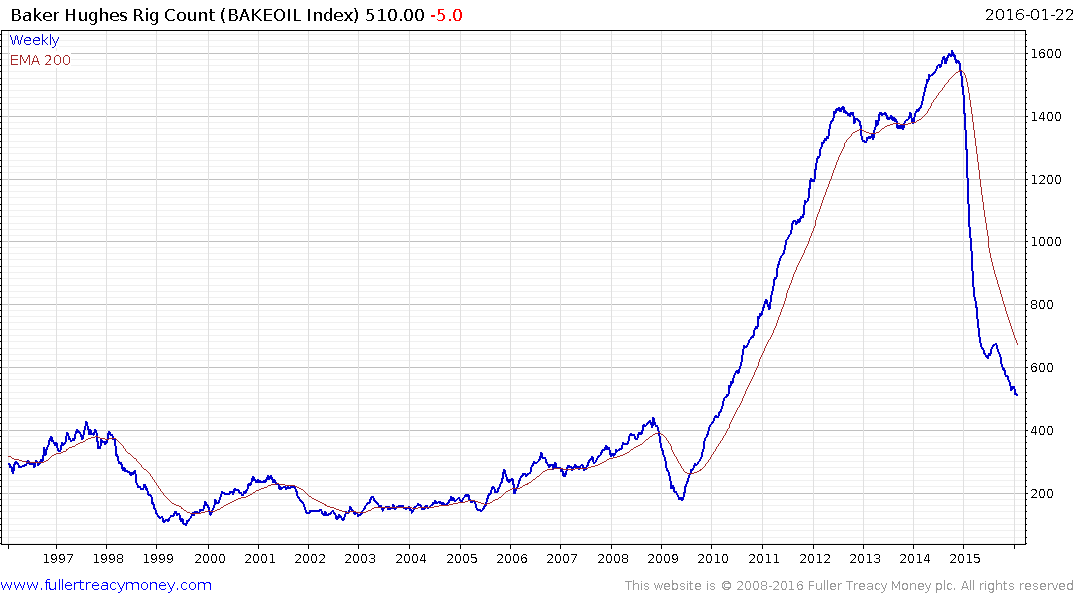 The Baker Hughes Rig Count is still trending lower, though at a less aggressive pace. It is still well above the level of activity that prevailed before 2010. That suggests we can expect more layoffs in the energy sector before we see evidence of stabilisation. 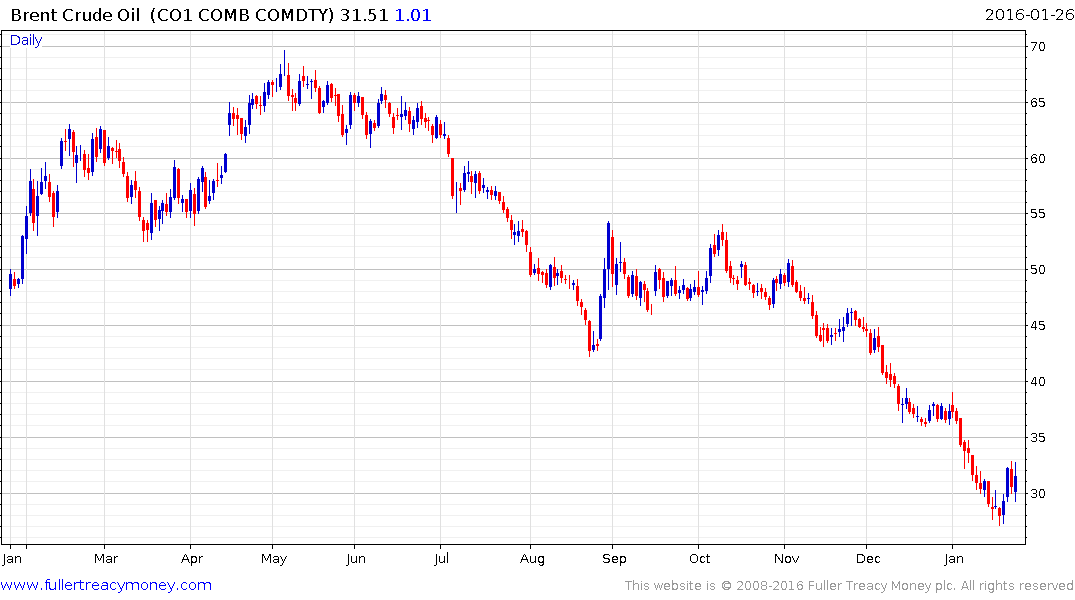 The bounce in oil prices,  will be a short-term benefit for drillers but a lot will depend on how long it lasts, how high it goes and where prices stabilise subsequently.