Musings From The Oil Patch February 5th 2019 by Eoin Treacy

The energy industry has been one of the worst performing investment sectors for the past decade.  After recovering from the financial crisis and recession of 2008-2009, energy stocks hit a peak in 2013, but have since underperformed the overall market, and declined in absolute terms.  This performance record is alarming.  It signals industry and company changes will be necessary to attract investors, especially those willing to provide fresh capital to support long-term projects.  What changes should be made needs to be the focus of industry strategic planning.  There is no magic solution.  Even companies with outstanding executive leadership may not be recognized or compensated for years, if ever.  That result will make attracting the next generation of workers and leaders to the energy industry that much more difficult.

Is shifting capital spending toward “green energy” the answer?  BP plc (BP-NYSE), under then CEO John Brown, attempted to rebrand the company as ‘Beyond Petroleum’ in 2000.  By 2013 it had abandoned that effort, sold its solar and wind power businesses, and re-emphasized building up its oil and gas assets.  Today, virtually every major IOC has a renewables business, with some, especially companies based in Europe, undertaking substantial efforts to build them.  The problem is that renewables are not as profitable as traditional oil and gas investments.  For an industry with a record of not maximizing its return on oil and gas invested capital, renewables have become a double-edge sword.

This investment return issue was highlighted in a Reuters interview from the sidelines of the recent World Economic Forum in Davos, Switzerland with Iberdrola SA’s CEO Ignacio Galan.  “It’s good that they [oil and gas companies] have moved in this direction but they make more noise than the reality,” he said.  According to CDP, a not-for-profit charity that runs the global disclosure system for investors, companies, cities, states and regions, major oil and gas firms, collectively, are spending around 1% of their 2018 budgets on clean energy, despite all the talk and focus on renewables.  Mr. Galan, head of the Spanish utility, the world’s largest wind power company, said that with returns on oil investments far exceeding those typical of wind and solar projects (15-20% versus 8-9%), he doubted major oil companies would make a meaningful shift until that changed.

There is a mismatch between the statements from many politicians that the future of energy is in renewables and the statements from industry insiders that confirm the profit margins from these businesses are nowhere near those of conventional fossil fuels. That virtually ensures the continued success of renewables is dependent on subsidies and/or priority offtake agreements to justify the considerable expense in building these operations.

Meanwhile oil and gas remain essential to the global economy despite mounting political headwinds and the march of battery technology. If we think about what the world will look like in five years, when the majority of auto manufacturers will primarily be selling electric vehicles, then it is hard to come up with a secular bull market hypothesis for oil prices. That is one of the primary reasons I expect prices to range rather than trend. The range however is likely to be between $30 and $100 so prices today are about mid-range. 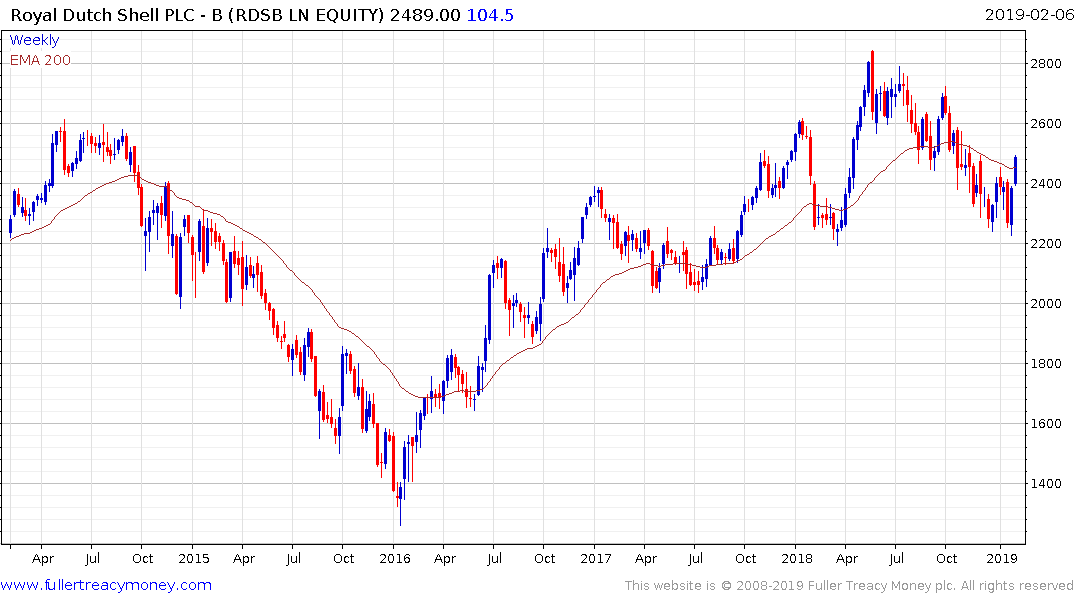 Among the major producers Royal Dutch Shell has bounced over the last couple of weeks to confirm at least near-term support and has held the medium-term sequence of higher reaction lows. 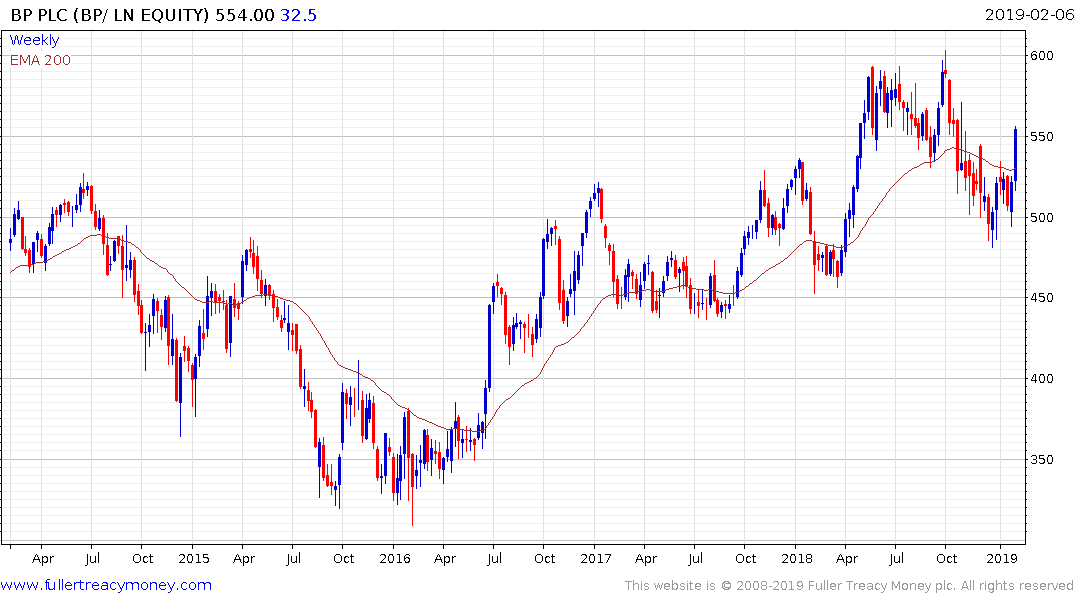 BP appears to be forming a first step above it long-term range.