Musings from the Oil Patch February 23rd 2016 by Eoin Treacy

For example, the surprise decision by Southwestern Energy (SWN-NYSE) to lay off 40% of its staff, or more than 1,100 employees, and shut down all its drilling rigs after having recently moved into a massive new headquarters building shocked the industry. Likewise, ConocoPhillips (COP-NYSE), after defending its dividend through the first year of this downturn even at the cost of laying off staff, finally caved and cut its quarterly dividend by two-thirds from 74-cents to 25-cents per share. ExxonMobil (XOM-NYSE), after reporting weak earnings results for its fourth quarter, followed up last Friday by announcing it had failed to replace its production last year for the first time in 22 years, announced a 25% cut in its 2016 capital spending plans and the suspension of its share repurchase program. These steps are designed to reduce the drain in the company’s cash balances. Another optimist, Pioneer Natural Resources (PXD-NYSE), after signaling late last year that it might actually increase its 2016 capital spending by 20%-30% as a result of the multiple attractive exploration opportunities it has in its Permian Basin acreage, announced a 10% capex cut this year, which means it will be forced to cut in half the number of drilling rigs it operates, going from 24 at year-end 2015 to 12 by mid-year 2016. The latest industry bombshell was Devon Energy’s (DVN-NYSE) announcement just last week that it was slashing its 2016 capital spending by 75% and laying off 1,000 employees, or about 20% of its staff. The shock from this announcement had barely been digested when Devon announced the sale of up to 69 million shares of stock and raising potentially $1.6 billion in cash to shore up its balance sheet. The cash infusion also helps the company by reducing the pressure to depend partially on selling assets to help fund capital spending.

The sale of stock by Devon is another example of the continuing ability of energy companies to tap capital markets, something a growing number of observers believe is prolonging the needed spending reduction that will cause oil output to fall off materially and set the stage for a recovery in prices. According to Bloomberg, the energy industry has announced plans to raise $4.6 billion in new equity, accounting for nearly 30% of all new equity raised so far this year. The amount of equity being raised is almost evenly split among three deals – Pioneer Natural Resources, Hess Corporation (HES-NYSE) and Devon. Each of these deals was upsized from their original announcement reflecting high levels of demand from investors betting not only the individual companies surviving but that their share prices will soar when the oil price rises and energy industry fortunes improve.

The $4.6 billion equity raise so far this year compares with the $7.8 billion raised by exploration and production companies during the first two months of 2015, the fastest pace in raising new equity in over a decade. An interesting question is whether the capital raised in early 2015 has been wasted? If we consider what has been happening to companies within the E&P and oilfield service sectors, the oil price collapse is finally ending the corporate and investor strategy of “pretend and extend.” That strategy means that company executives have been selling lenders and investors on the view that a turnaround is just around the corner, so if they will just give them a little more time (and money?) the companies will be fine. As this strategy evaporates, the battle lines are drawn between managements and their owners. A change in the past is that many of the owners of the companies are investors who specialize in distressed securities. As a result, the struggle over how to redo the capital structure of energy companies becomes more intense as debt-owners, who have legal claims against the assets of the company, fight to gain the most ownership and thus stand to benefit the most whenever the share price recovers.

Many of these recapitalization struggles are being fought in the esoteric world of corporate bankruptcy law. The last great boom for the local bankruptcy industry occurred in the period of the 2008 financial crisis and the recession that followed. For energy, the greatest bankruptcy boom was the demise of the industry in the 1980s bust. A recent article about the state of the bankruptcy business, in response to the collapse in oil prices, was in The Houston Chronicle. The article included a graphic showing the number of Chapter 11 (the section of the bankruptcy law that provides for restructuring of financially distressed companies rather than liquidations of companies that is conducted under Chapter 8 of the code) filed in the Southern District and the State of Texas. In 2015, the number of bankruptcies filed in the Southern District approached close to those filed in 2008, the start of the financial crisis. The article cited a survey of 18 bankruptcy legal experts by The Texas Lawbook calling for a doubling of filings this year.

This is the most comprehensive reporting of the measures taken by Texas energy companies to preserve capital I have seen. I chose to reproduce it because it should serve as a useful record for subscribers look as this transition unfolds.

I’d like to draw particular attention to the total of $25.1 billion mentioned in bankruptcies so far. This seems like a low figure considering how much was borrowed and spent over the last decade but there is nothing to say that it will not increase. The measures taken by companies to preserve capital are not short-term and those unable to source fresh capital are being prices as it they are going to go bust. 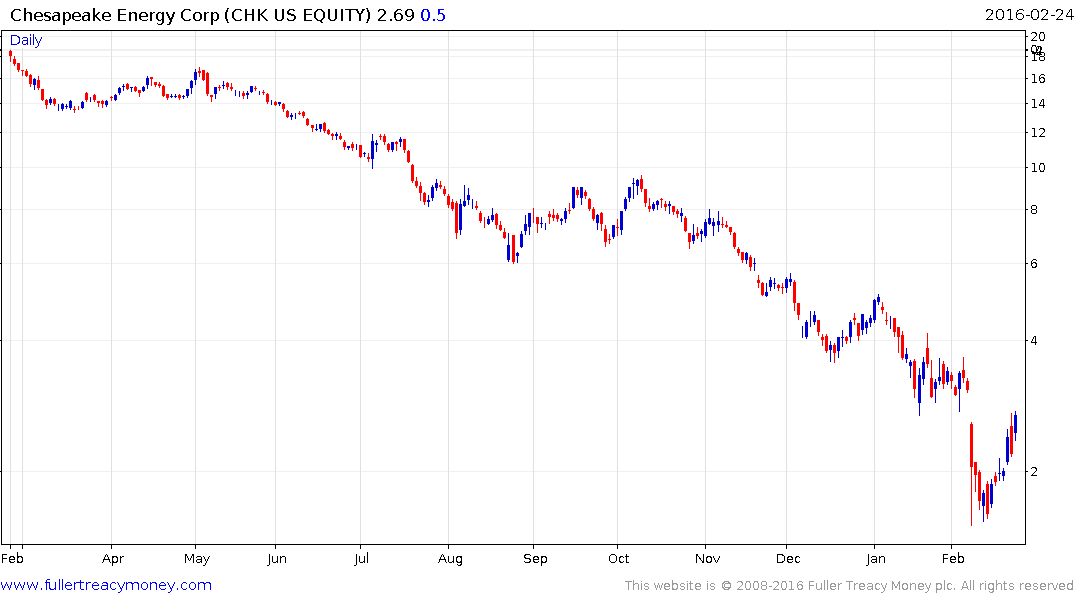 Chesapeake Energy is bucking the trend somewhat and received more from its asset sales than it was expecting and the share has rallied over the last week to almost completely unwind its February 8th plunge. It is now testing the region of the progression of lower rally highs. It will need to sustain a move above $4 to break the medium-term downtrend but more important find support above this month’s low near $1.50 on the first significant pullback to demonstrate demand coming back in at progressively higher levels.

We have been talking for years about how unconventional oil and gas represent game changers for the energy sector and this is now been seen. I find it interesting that it took the decline in prices for energy analysts to engage in the kind of self-reflection evident in so many reports today. The discussion of the hypothesis on the impending change from an industrial age to as yet unknown state (Page 8 & 9) is an example of this. There is certainly a temptation to conclude that the success of non- mainstream candidates in the Republican and Democratic primaries is a harbinger for impending radical change but there is little evidence of that. Certainly the decline in prices represents a massive change to the status quo for energy companies and those that depend on their largesse but it represents a windfall for consumers. 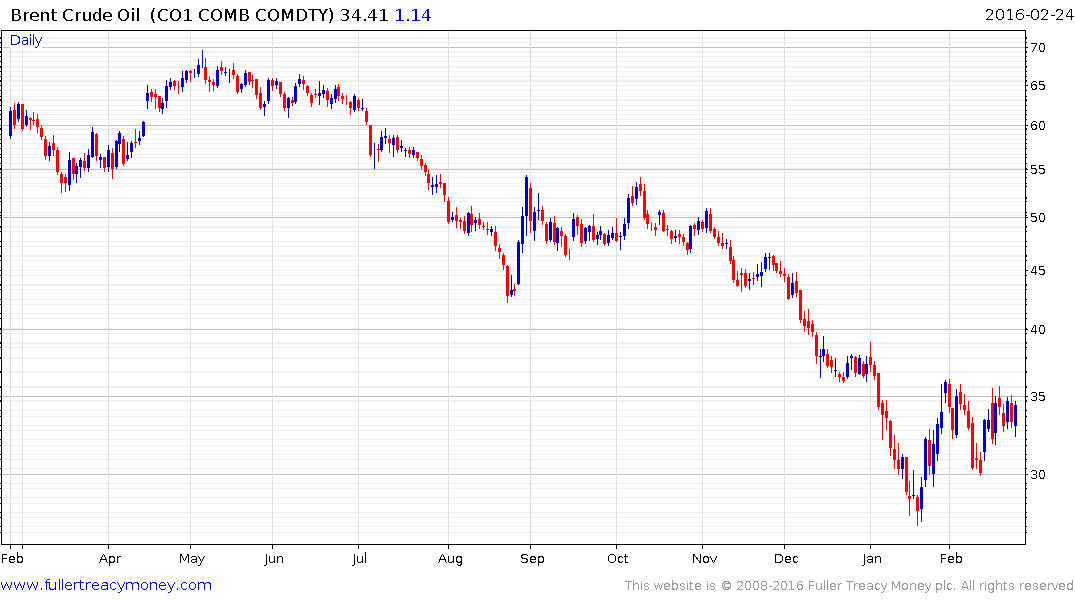 Meanwhile Brent Crude has posted its first higher reaction low in quite some time and I wonder if Al Naimi's prognosications about $20 oil might be an example of those who know it best, love it least because they have been disappointed the most. We will continue to be guided by the price action.