Musings From the Oil Patch December 29th 2020 by Eoin Treacy

What is most interesting is the impact of the JKM price rise on the global LNG market and its implications for the U.S. LNG industry. The sharp JKM price increase has diverted LNG cargoes away from Europe and toward Asia. This means Europe is drawing down on its record gas inventories. With JKM trading at the highest premium to the Dutch and U.K. gas benchmarks since 2014, this shift in cargoes will continue. That will help boost European gas imports during 2021, meaning there is less risk of another gas glut developing that would force Gulf Coast cargo cancellations. It also means the expansion of the domestic LNG business will be supported, leading to ‘final investment decisions” on several of the new terminals under development.

On December 7th, Cheniere Energy announced that its Train 3 at the firm’s Corpus Christi terminal had loaded its initial commissioning cargo. This will add about 700 million cubic feet per day to the LNG gas feed rate, the amount of domestic gas flowing from producing wells to LNG terminals, pushing the total to more than 11 billion cubic feet per day (Bcf/d). The EIA’s Short-Term Energy Outlook for December estimated that November dry gas production in the U.S. was 89.6/Bcf/d. It also estimates that net LNG exports were running at a 9.2/Bcf/d rate, or slightly over 10% of domestic supply. Assume that gas production remains at this level, lifting the feed gas flow to 11/Bcf/d will push LNG’s share of domestic gas output above 12%, which will likely grow further. That prospect was captured in a chart from a gas market report by Grand View Research. Under their outlook, growth will steadily increase, driven primarily by increased use of gas in power generation. As the world’s energy system decarbonizes, coal will be displaced by natural gas.

There is an abundance of natural gas and the price is also cheap. Together that creates an incentive to use more of the commodity. The fact that natural gas is less polluting than coal for power generation is at least a medium-term stop gap measure until the presumed utopia of carbon free power is achieved. 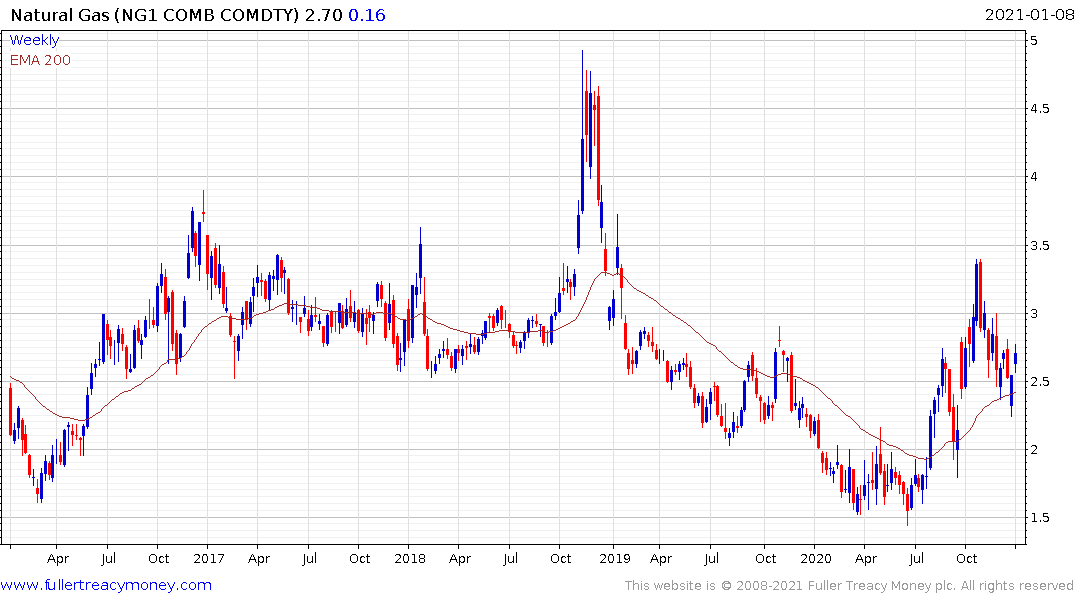 Natural Gas has been subject to some swift pullbacks over the last month but it is now steadying from the region of the trend mean and continues hold a medium-term sequence of higher reaction lows. While the potential for a cold snap could result in upward pressure on the pricing. 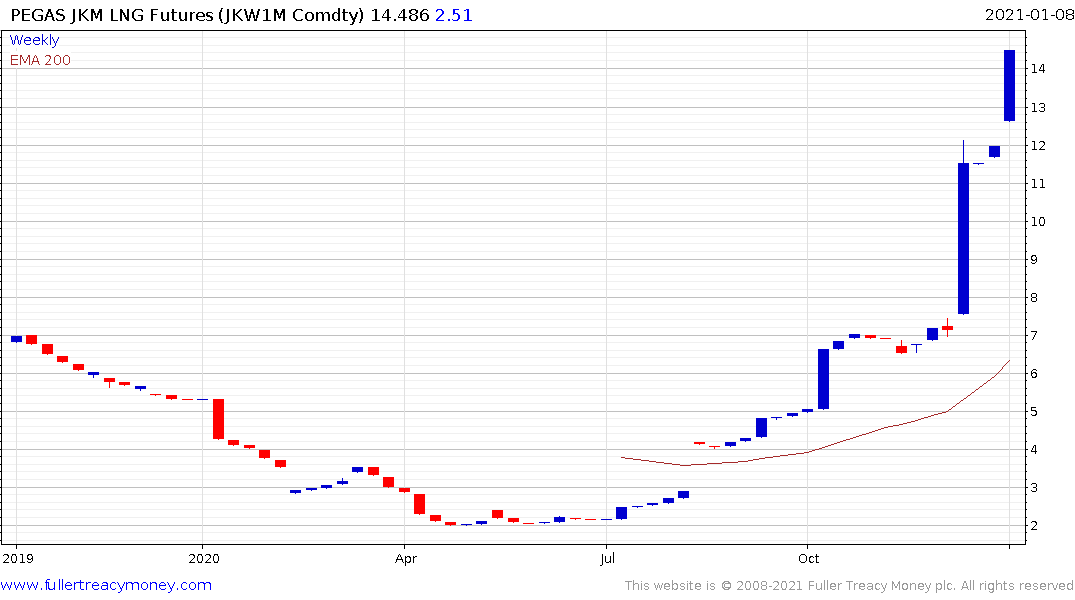 The JKM LNG price has rallied impressively over the last couple of months cold weather in Europe and China has boosted demand. This is not a liquid price series so I do not know how well the chart will update. However, a clear downward dynamic will be required to check momentum beyond a pause.