Musings from the Oil Patch August 21st 2018 by Eoin Treacy

We were recently privileged to see a presentation of the results of a study conducted by IHS Markit for the group.  The punch line of the study is:

How does this happen?  It is due to the Marcellus and Utica supplanting the Gulf Coast as the largest producer of natural gas, and it has now become the low-cost gas and ethane supplier in the nation.  But, the Shale Crescent USA region has another critical advantage – it is in the heart of the market for U.S. and Canadian polyethylene demand.  As the map shows, 70% of this demand is within a 700-mile radius, or the equivalent of one day’s drive.  There is also rail and water transportation available.  The map’s circles reflect relative market potential.  The study predicts that demand in this region will be almost six million tons of liner low-density polyethylene (LLDPE) in 2023, equal to about 14% of global demand then.  That compares to Northeast Asia is the world’s LLDPE demand leader with a 40% market share.

A subsidiary of Royal Dutch Shell Ltd. (RDS.A-NYSE) is building a petrochemical complex in Ohio consisting of an ethylene cracker with a polyethylene derivatives unit, capable of producing 1.6 million tons per year.  Construction will create 6,000 construction jobs.  When the plant begins commercial production in the early 2020s, it will employ 600 workers.  Because the plant is located on the water, it will also stimulate barge transportation, including barge construction and the necessary workers.

Unconventional oil and gas remain gamechangers for the energy sector and that influence continues to unfold for the USA’s primary resource basins as well as opening up new ones like the Utica and Marcellus shales. 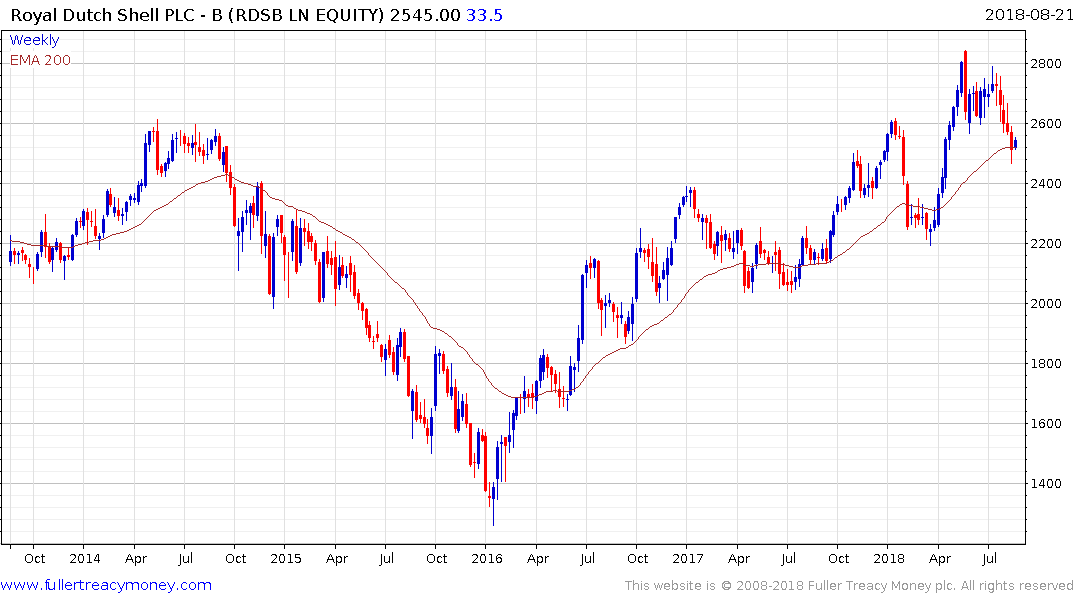 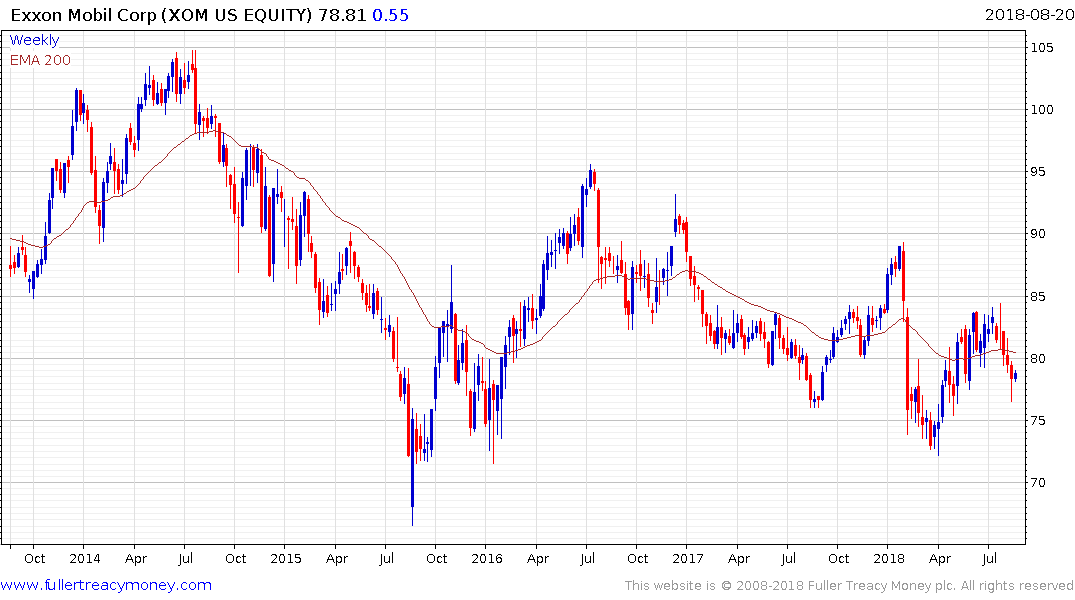 Both Royal Dutch Shell and Exxon Mobil produce more gas than oil. The former is steadying from the region of its trend mean. The latter has been drifting lower since the middle of 2016 and while it has steadied this week, it needs to sustain move above $85 to break the sequence of lower rally highs.

The abundance of natural gas and its relative discount to other energy sources are bolstering the argument for the use of hydrogen fuel cell cars. However, since these are not carbon neutral solutions they have not yet enjoyed widespread uptake. 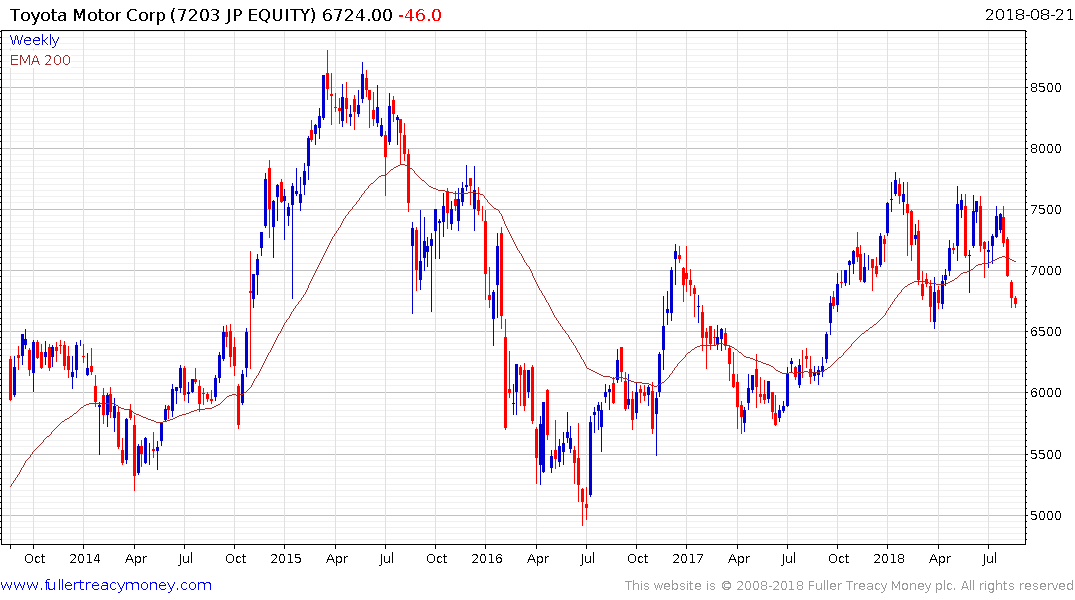 Toyota has not been immune from the travails of the wider auto manufacturers sector and is now back testing its March low. It needs to bounce soon if the medium-term progression of higher reaction lows is to remain intact. 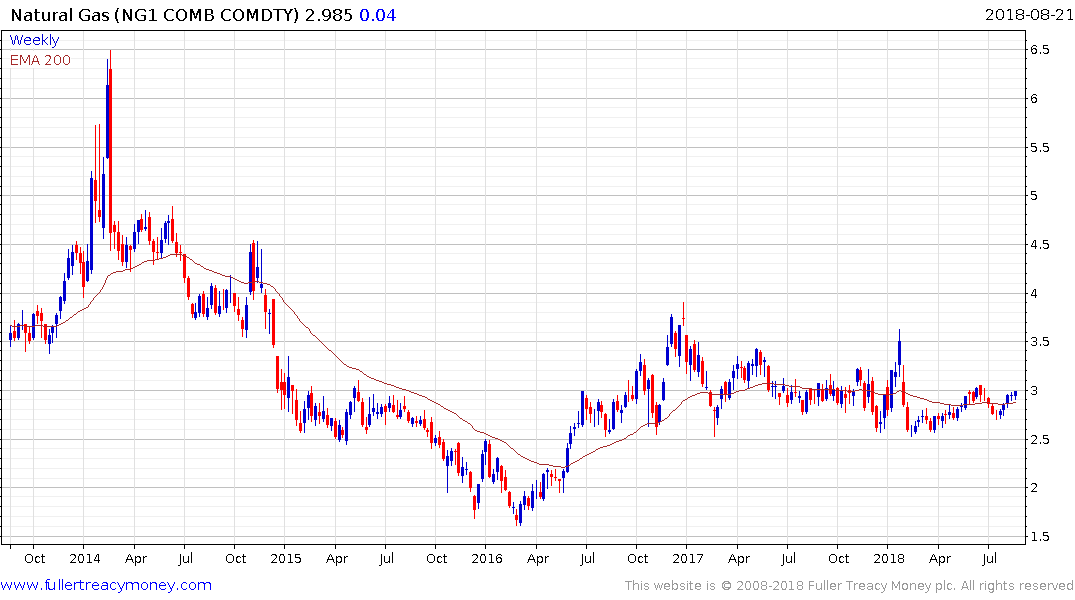 Meanwhile natural gas prices are firming within their range.