Mine Shutdown Heats Up Uranium Prices
Comment of the Day

Mine Shutdown Heats Up Uranium Prices by Eoin Treacy

Cameco (ticker: CCJ), which provides roughly 17% of the world’s uranium production, announced on Nov. 8 that it will temporarily suspend production at its McArthur River mining and Key Lake milling operations in Canada by the end of January. It blamed weakness in uranium prices, which it said had fallen by more than 70% since the Fukushima accident in March 2011. McArthur River is the world’s largest high-grade uranium mine.

The news sent weekly spot prices for uranium up by nearly $3, to $23 a pound, on Nov. 13, according to nuclear-fuel consultancy Ux Consulting. Weekly prices stood at $20.25 a pound on Nov. 6, ahead of the announcement, holding in the tight range of $19.25 and $20.75 they had traded at from late May. January uranium futures traded on Globex settled at $24.40 on Thursday. “This is the last gasp of the uranium bear market,” says Christopher Ecclestone, a mining strategist at investment bank and research firm Hallgarten & Co., adding that the market is likely to “perk up” from here

Uranium prices have stabilized near $20 following news of a supply disruption. The fact that closure was voluntary helps to highlight just how much stress the sector is under. The Fukushima disaster has set back the cause of uranium by at least a decade despite the reliability and abundance of the power it provides and the inherent safety of generation IV reactors. 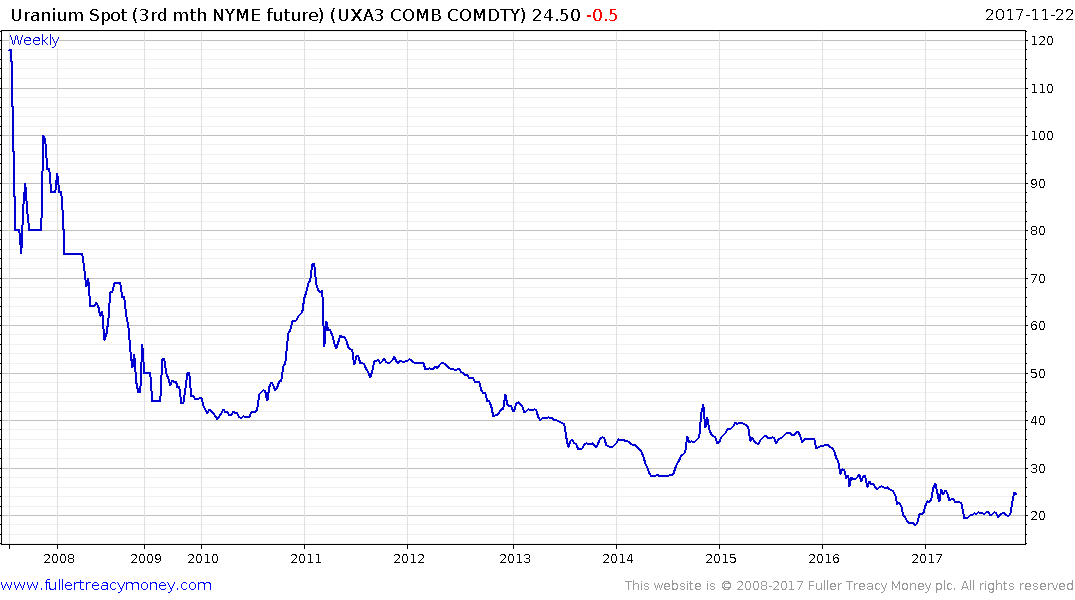 In the short-term the closure of Cameco’s flagship mine suggests the price of the metal is unlikely to fall any further. 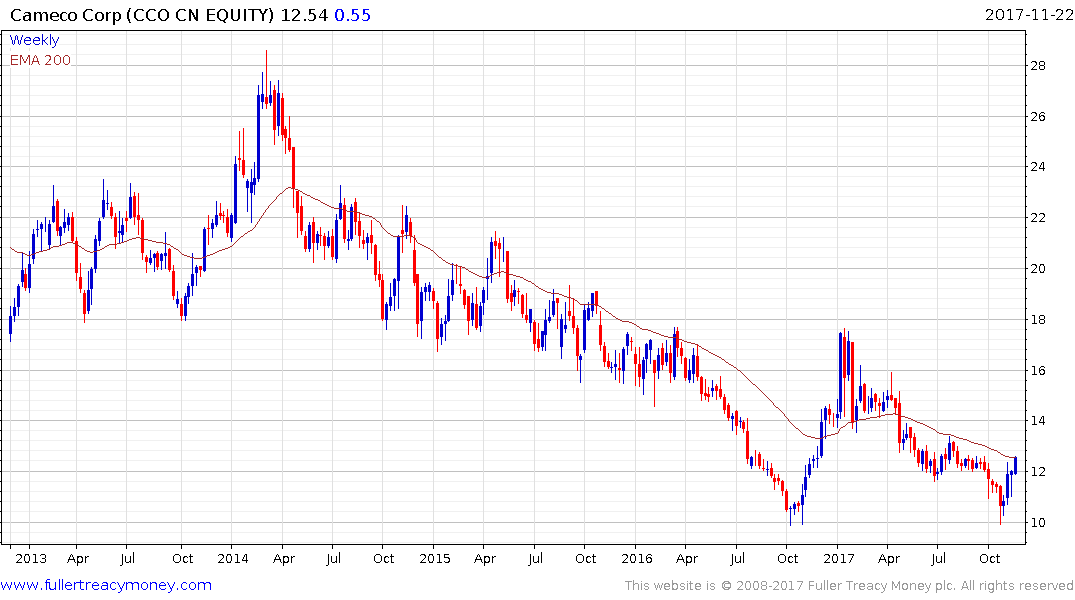 Cameco bounced from the C$10 area in late October and has now closed its overextension relative to the trend mean. A sustained move above $12.50 would suggest a bounce of more than short-term significance. 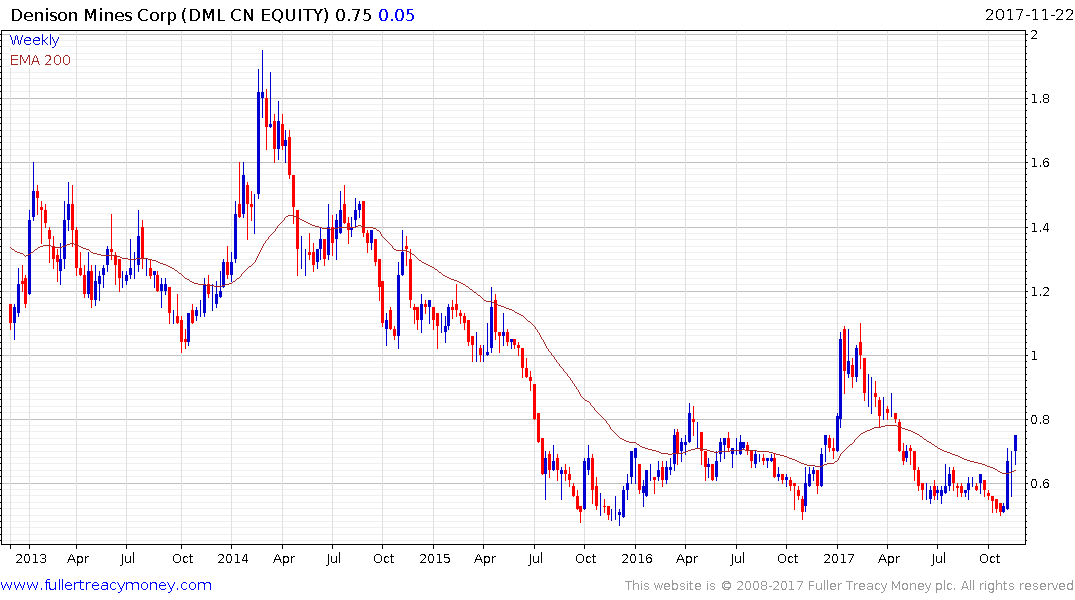 Denison Mines has also bounced over the last three weeks from the lower side of a two-year base formation. 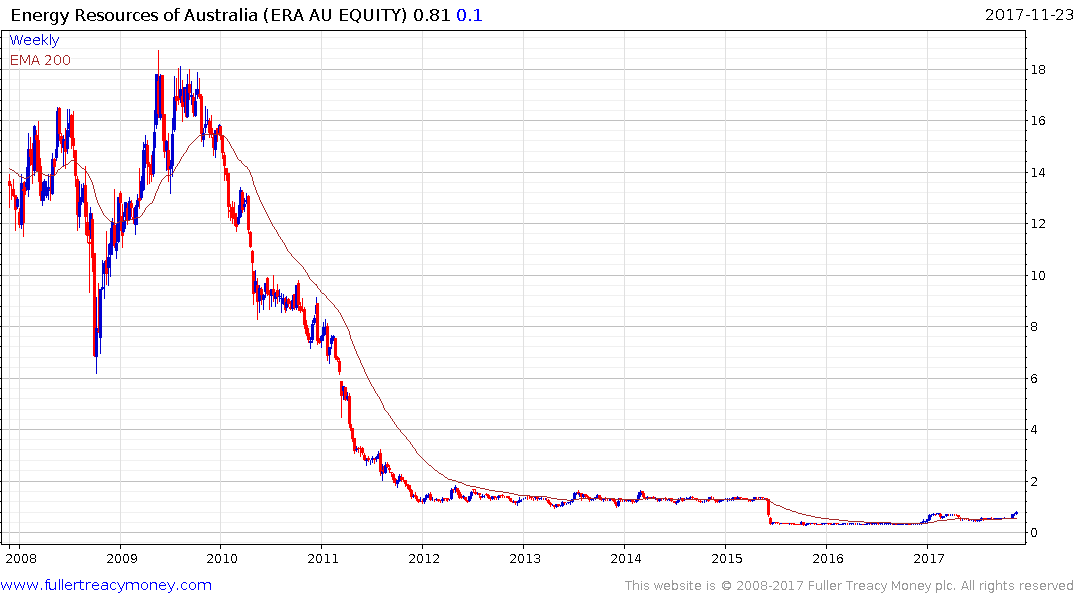 Energy Resources of Australia may be in the process of completing a first step above the 2016 base formation. 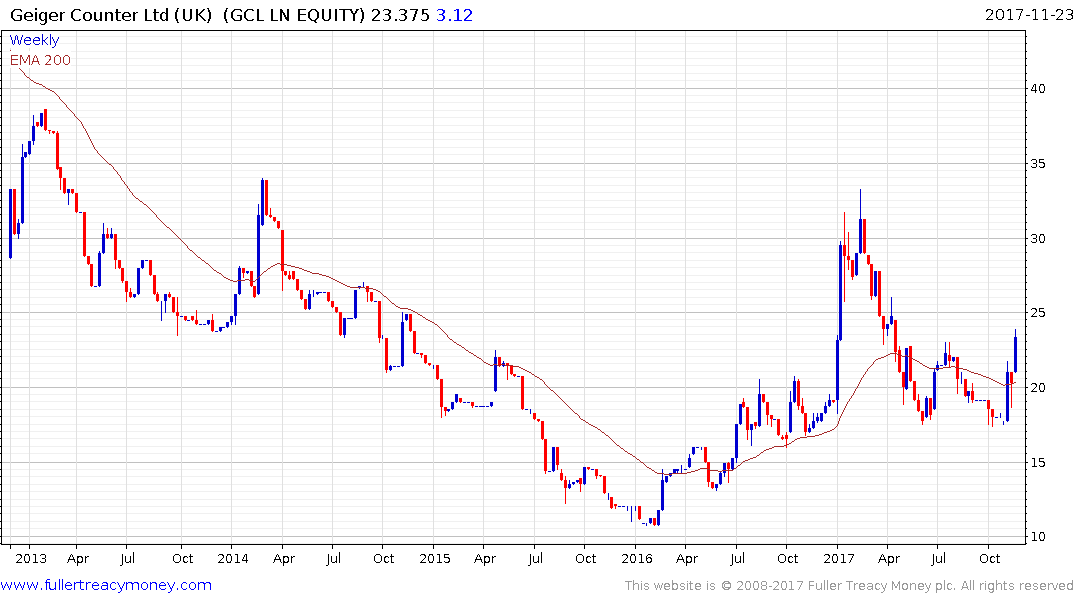 UK listed Geiger Counter trades at a discount to NAV of 7.27%. It has rallied over the last couple of weeks to break this year’s progression of lower rally highs.

The inventory of old reactors dotted around the world, coupled with a regulatory environment still mired in the 1950s suggests the risk of future accidents cannot be ruled out. Meanwhile it is in emerging markets, particularly China and India, where any hope for growth resides. The current outlook for uranium shares looks likely to benefit from the price of the metal bottoming but this is still a speculative sector.