Lumber prices have risen 50% since August, and 2 experts say the resurgence will continue through early 2022
Comment of the Day

Lumber prices have risen 50% since August, and 2 experts say the resurgence will continue through early 2022 by Eoin Treacy

A reason for the price increase in lumber is a modest increase in renovation demand after price-sensitive buyers proceeded with home improvement projects now that wood prices have seen a substantial correction, Dustin Jalbert, senior economist at Fastmarkets, told Insider.

Though Jalbert does not expect the kind of runup in lumber prices seen earlier this year - a period when there was a backlog of homes waiting to be built and a shortage of key construction supplies - as pandemic-related supply constraints continued to ease.

"The market has finally transitioned to a more balanced state compared with being severely oversupplied in the summer months, which ultimately drove the massive correction in prices from record-high levels set in May," Jalbert told Insider.

And even if Americans wanted to build and renovate homes, the field consumption of lumber is being bogged down by shortages of other complementary materials such as windows, siding, cabinet appliances, and garage doors, he added.

The supply side, meanwhile, continues to face challenges, Jalbert said. Log costs in British Columbia, which accounts for about 16% of North American lumber capacity, remain elevated.

Commodities tend to remain in well-defined ranges for years before breaking out and rallying in a profound manner that creates an uncomfortable feeling for consumers and sets new price expectations for sellers. Lumber spiked higher between 1991 and 1993. It subsequently gave up most of the advance but never dropped back into the preceding range. 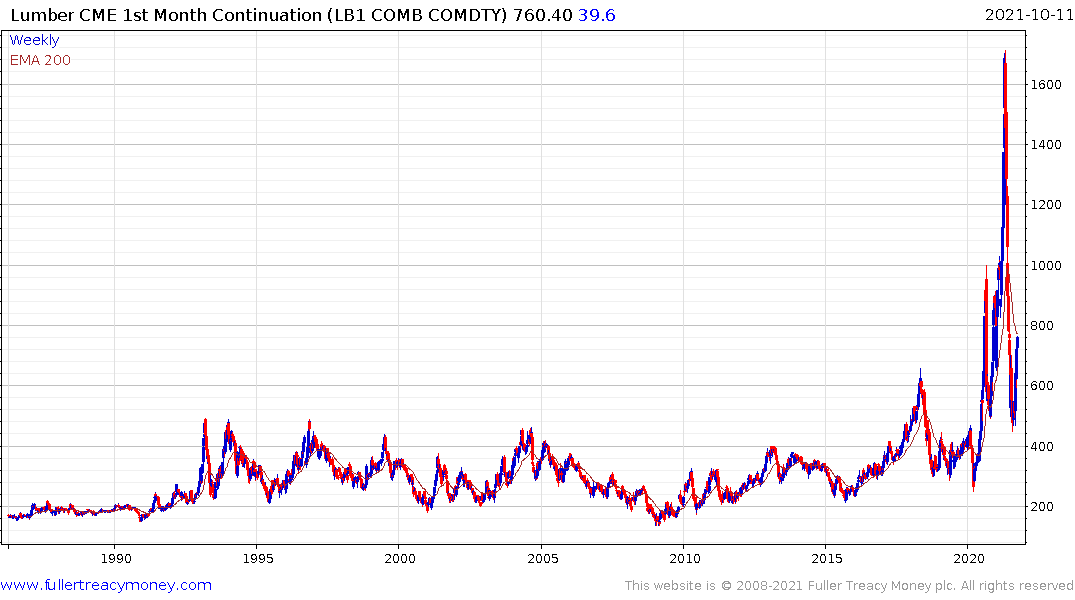 Lumber was on the cusp of breaking higher in 2018 but the move failed. The breakout in 2020 succeeded and it is now very unlikely that prices will ever trade back below $400. The only way prices can fall back below that level is if demand evaporates and that is now looking likely in the near term. 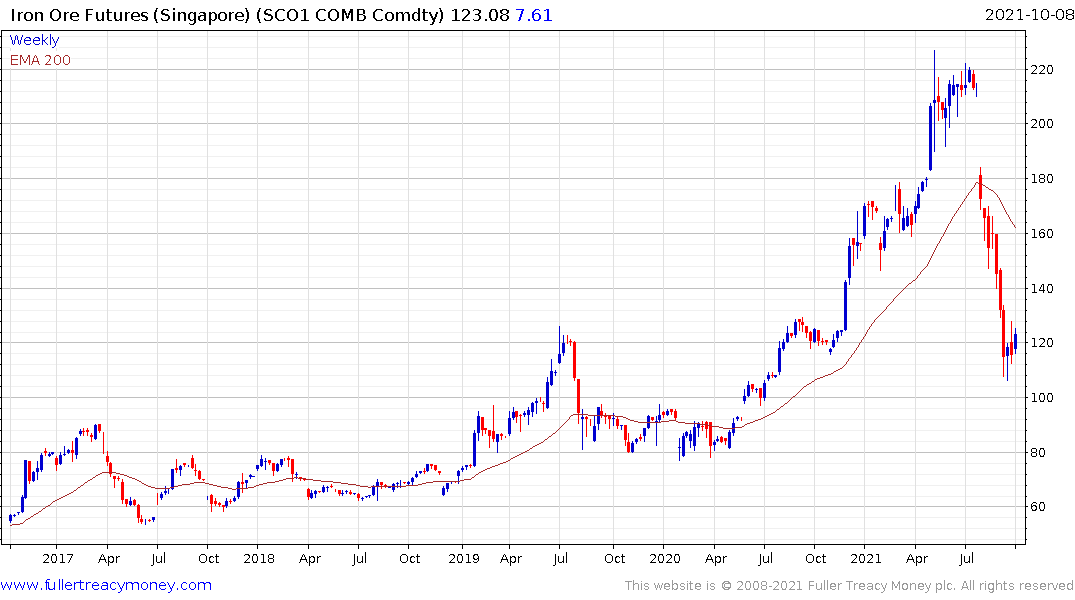 Iron-ore prices gave up much of the breakout’s gain over the last couple of months but continue to firm from the $100 area. 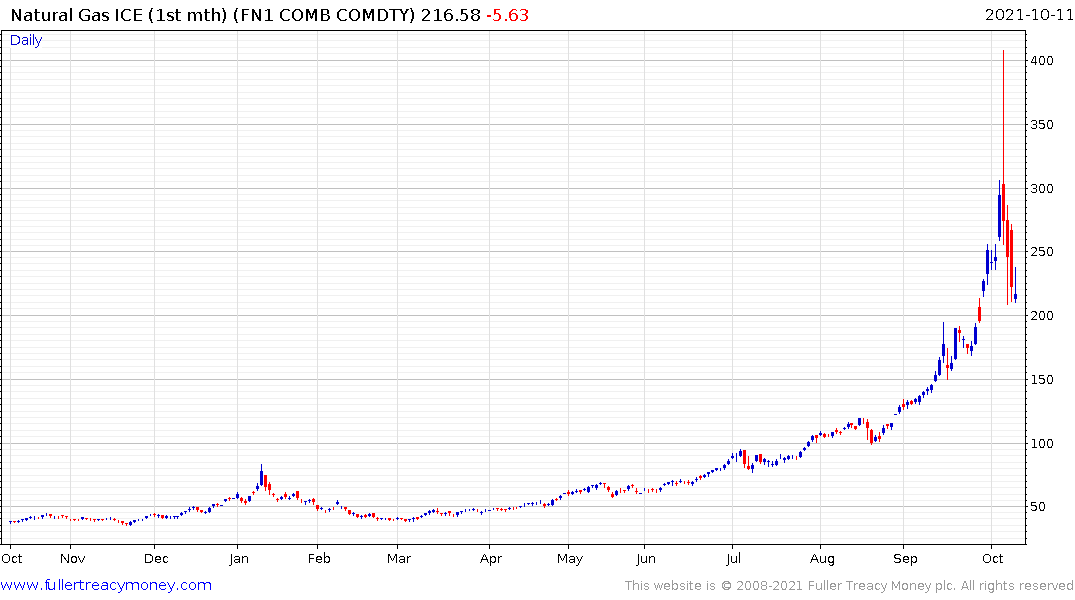 UK Natural gas is now unwinding its extraordinary advance but it is unlikely to ever drop back down into the underlying base. New price expectations have been set. 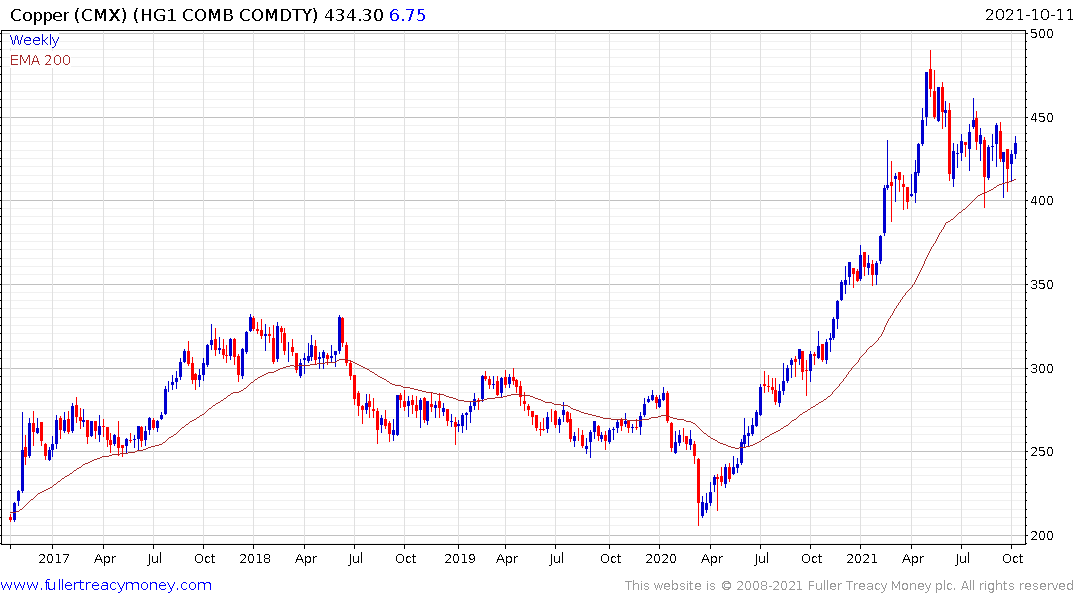 Copper has been ranging for 15 years and is currently firming from the upper side of that long congestion area. A sustained move above $4.50 would break the five-month sequence of lower rally highs and signal a return to demand dominance beyond the short term.