But the plan may be too little too late for Japan's moribund atomic industry, which is floundering under the weight of estimated losses of almost $50 billion, forcing two utilities to ask the government for capital last week.

Plant operators have had to pay out almost $90 billion on replacement fossil fuels, with domestic media saying they have also spent an estimated 1.6 trillion yen ($16 billion) on nuclear plant upgrades to meet new safety guidelines.

?A recent Reuters analysis shows as many as two-thirds of the country's 48 idled nuclear reactors may have to be left closed because of the high cost of further upgrades, local opposition or seismic risks.

Japan faces a daunting energy challenge as the weakness of the currency and collapse of the domestic electricity generation sector push energy prices up. The decision to reactivate stalled nuclear plants is to be welcomed but as the above article highlights many of these plants are badly in need of expensive remediation work which is unlikely to be done. This suggests that while restarting some plants at least partially ameliorates the situation, Japan needs to do a lot more to fix its energy policy. 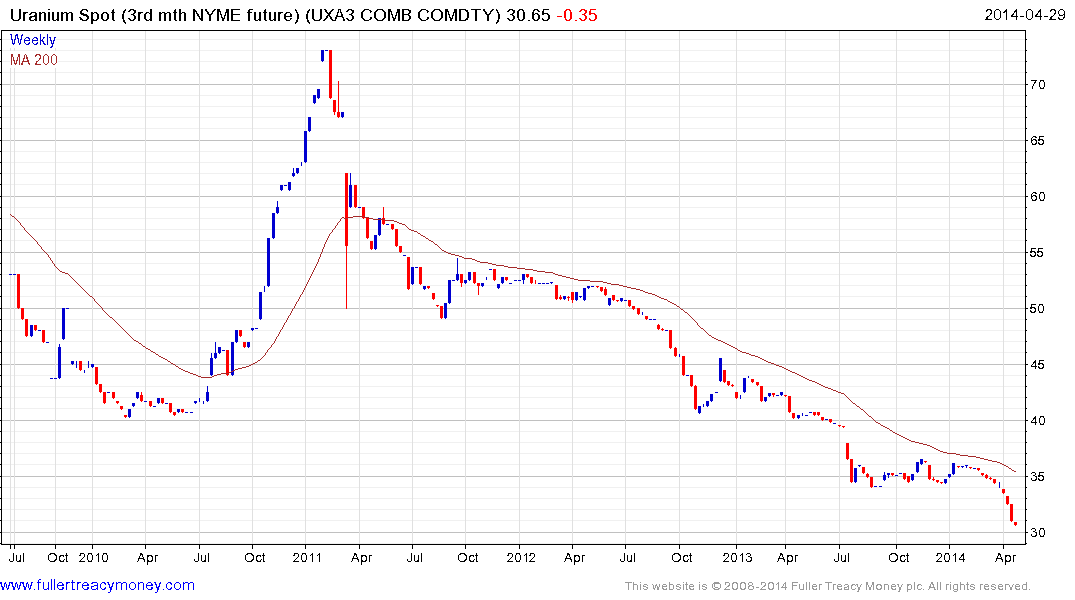 The shares of uranium miners had been improving in advance of the anticipated restart of Japan’s nuclear sector, but the disappointing outcome has contributed to uranium prices falling more than 10% this month. The result is that some of the better performing uranium mining shares have unwound their respective overextensions relative to their trend means. 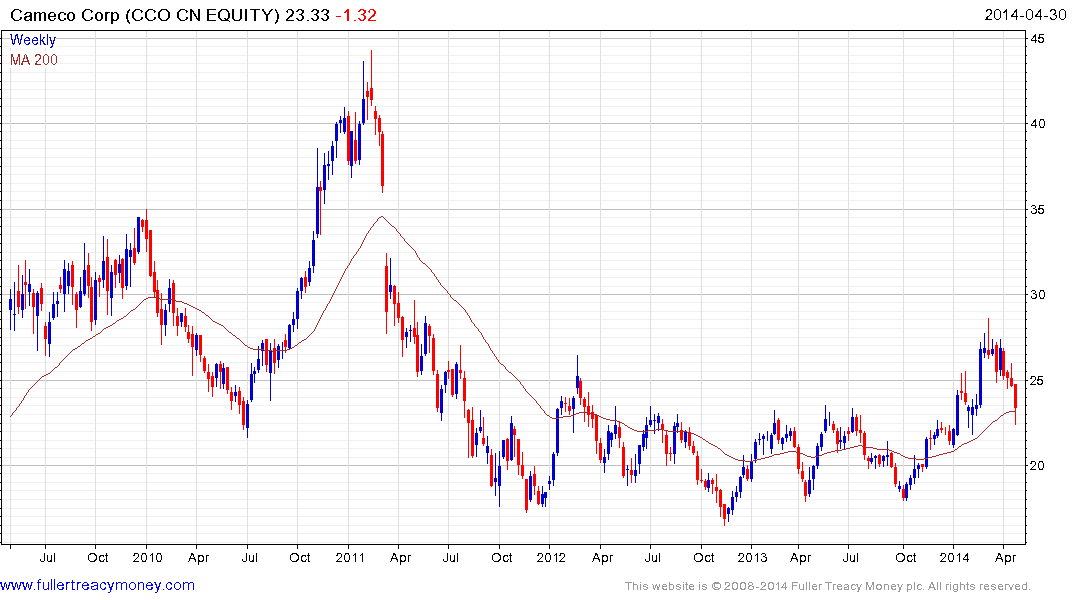 Cameco (Est P/E, 25.06, DY 1.71%) has returned to test the upper side of its two-year base and the region of the 200-day MA. Provided it finds support in this area, the benefit of the doubt can continue to be given to recovery potential. 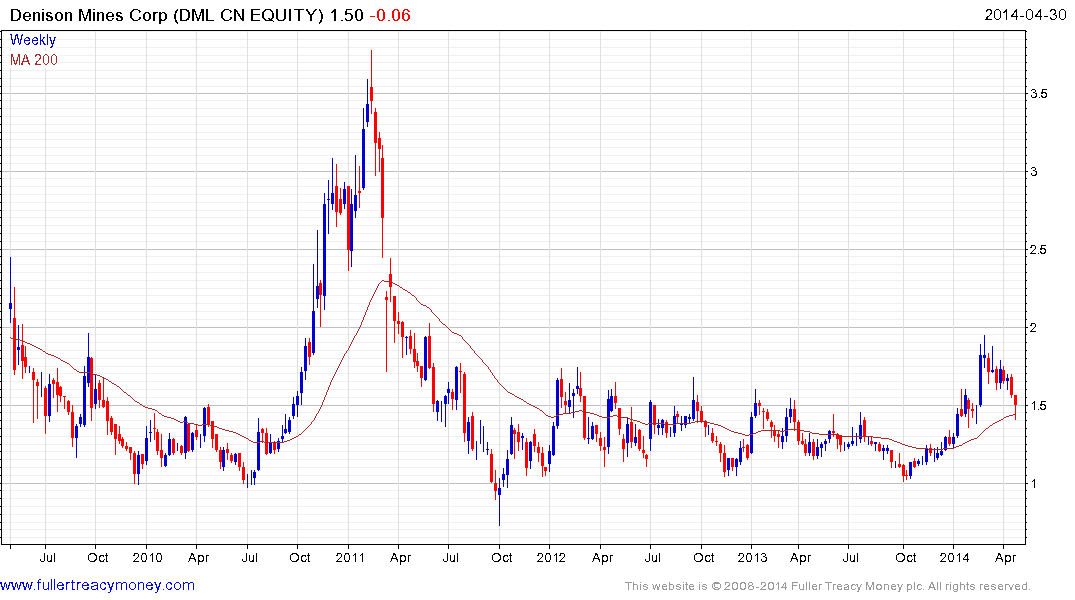 Denison Mines has also returned to test the region of the 200-day MA. 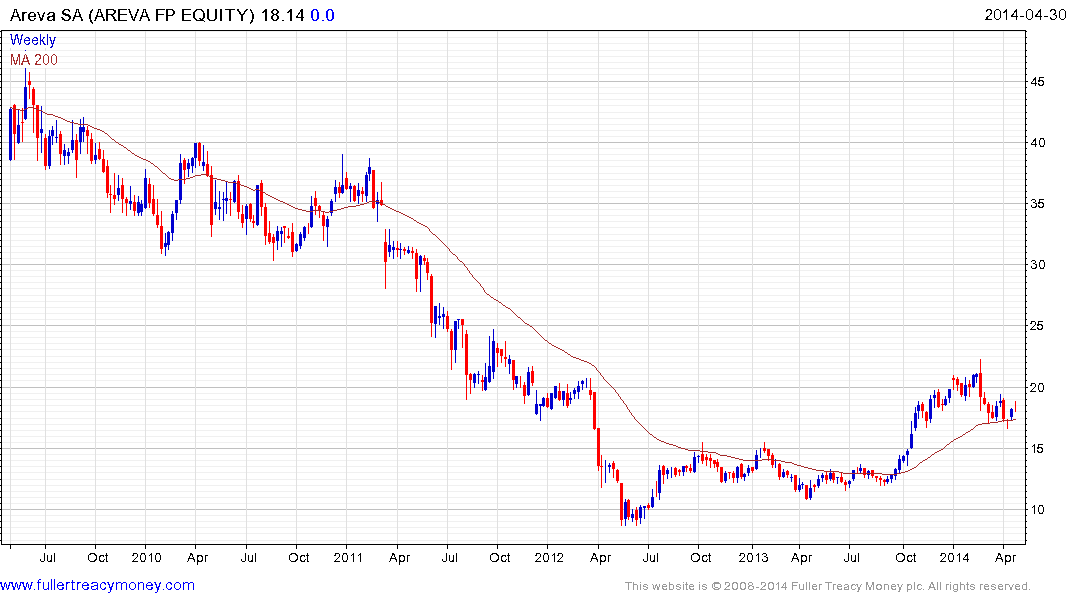 French listed Areva (Est P/E 38.6, DY N/A) pulled back sharply in late February on disappointing earnings forecasts but has at least paused in the region of the 200-day MA. It will need to continue to hold above €16 if potential for first-step-above-the-base development is to be given the benefit of the doubt.