Inflation: The defining macro story of this decade
Comment of the Day

Inflation: The defining macro story of this decade by Eoin Treacy

The Fed’s move away from pre-emptive action in its new policy framework is the most important factor raising the risk that it will fall well behind the curve and be too late to deal effectively with an inflation problem without a major disruption to activity. Monetary policy operates with long and variable lags, and as we have noted, it will also take time to recognize that inflation has actually overshot excessively and persistently. As inflation rises sustainably above target, forward looking expectations are likely to become unanchored and drift higher, adding momentum to the process.

By this point, the Fed will likely be moved to act, and when it does the impact will be highly disruptive to the markets and the economy. In the past, the Fed has not been able to reverse a sustained run-up in inflation without causing a recession and potentially large increase in unemployment. Being behind the curve when it starts will make the event that much more painful. Rising interest rates will also cause havoc in a debt-heavy world, leading to financial crises especially in emerging markets. If the Fed lets up and reverses rate increases in response to rising unemployment and other economic pain as occurred during the 1970s, inflation could back up again, leading to a repeat of the stop-go economic cycles that occurred during that period.

Depending on the timing of this potential inflation scenario, the 2022 midterm elections could be crucial. A surprisingly strong showing on the Democratic side could even pave the way for modifying the Federal Reserve Act to raise the inflation objective. This discussion has been brewing in academic circles for some time, not the least as a way to enhance the Fed’s power to move interest rates into negative territory when needed. But such a move could damage the Fed’s inflation fighting credibility. It could also lead to still higher inflation over time and ultimately intensifying the kind of boom-bust cycle experienced during the 1970s.

In brief, the easy policy decisions of the disinflationary 1980-2020 period appear to be behind us.

The response to the credit crisis resulted in massive asset price inflation which exacerbated inequality across society in most countries. The response to the pandemic is aimed at reversing that trend and providing greater opportunity to the people left behind by the last recovery. That implies massive money printing, spending and social programs.

My custom measure of global fiscal deficits is still trending higher and currently sits at $2 trillion. Over the last twenty years the trend has taken leaps higher during crises, moderates subsequently, only to surge again during the next crisis. The big difference on this occasion is the deficit condition was already trending higher heading into the pandemic and then accelerated. The Trump tax cuts and deficit spending spurred that advance and is unlikely to be reversed any time soon.

Inflation is undoubtedly a monetary phenomenon but it is also a psychological one. Consumer and corporations have to believe in inflationary pressures to act in a pre-emptive manner. The rush to buy houses and cars during the pandemic is an example of that beginning to happen.

Companies moving to hold more inventory and opening trading operations for commodities would be an additional signal that efforts to control for inflation are rising. It is worth remembering that major consumers like Ford and GM had commodity trading arms in the 1970s whereas it is really only the big suppliers like oil majors and miners have them today. 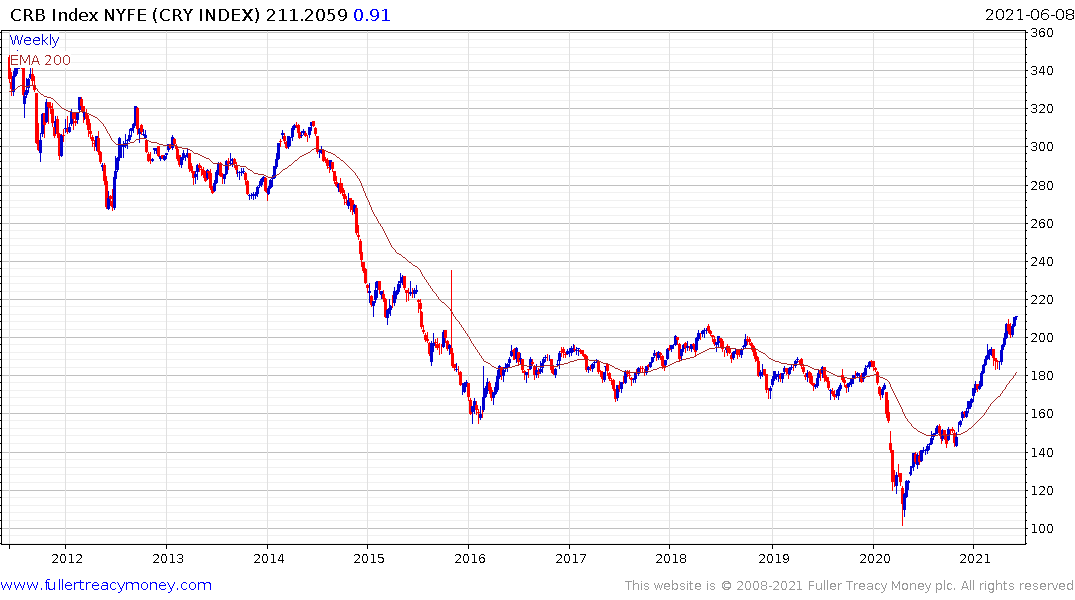 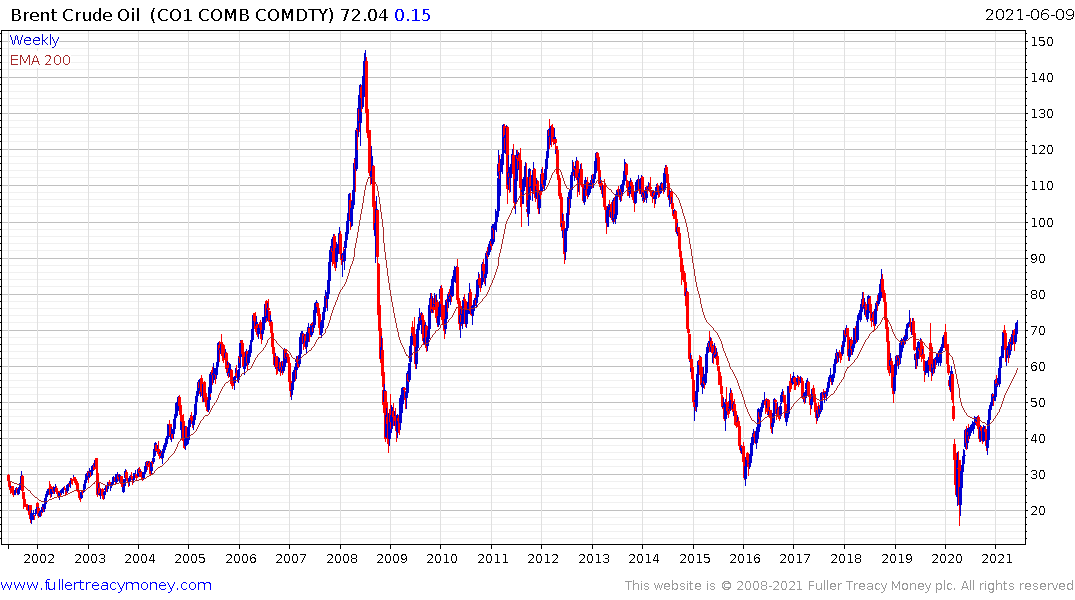 Some of the heat is coming out of the lumber market but commodity indices continue to trend higher in a consistent manner. The CRB Index which is heavily weighted by oil has completed its base formation. 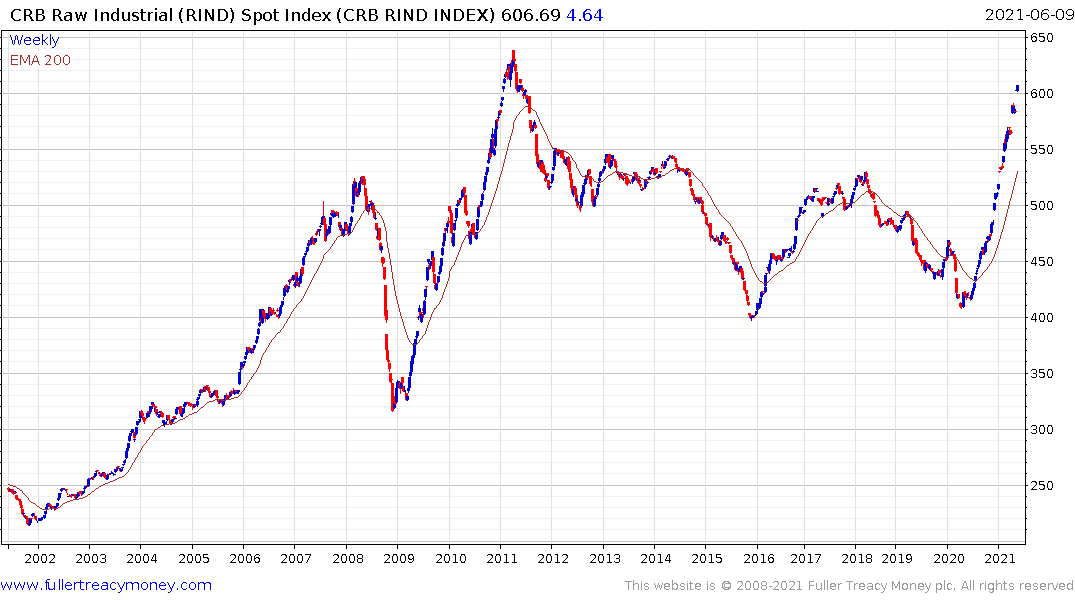 The CRB Raw Industrials Spot Index continues to extend a steep recovery and is in the vicinity of the 2011 peak. 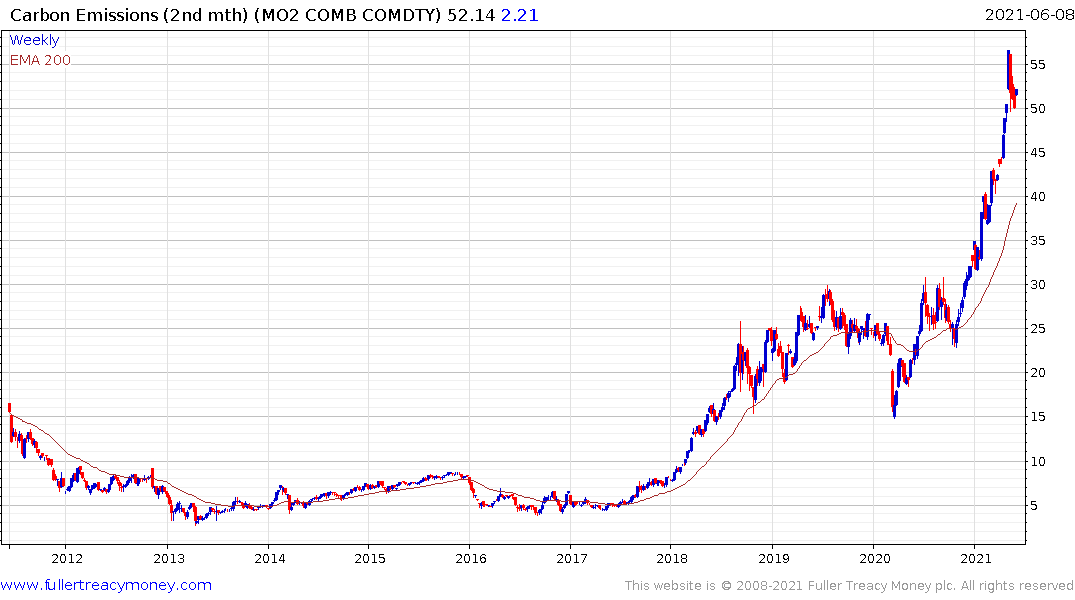 Carbon emissions rebounded this week from a mild consolidation and remain on an upward trajectory. This alone is going to raise the cost of just about everything and contribute to the perception of higher inflation.