How China's New Carbon Market Will Work
Comment of the Day

How China's New Carbon Market Will Work by Eoin Treacy

Before the launch of the national ETS, China had already established regional ETSs in eight provinces and cities, including Beijing, Shanghai and Shenzhen. Seven of the regional ETSs started trading in 2013, while the one in the eastern province of Fujian kicked off three years later. These regions allow companies to buy carbon credits equivalent to as much as 5% to 10% of their original quotas or actual emissions. The average price of carbon credits traded on the regional ETSs stands at 50 yuan ($7.73) per ton, analysts at Guotai Junan Securities Co. Ltd. estimate, far lower than the 250 yuan equivalent per ton in the EU ETS in 2020.

Initially, China’s national ETS will only cover the electricity generation sector. A batch of 2,225 electricity companies (link in Chinese) will participate in the trading.

In addition to electricity, the trading system will eventually cover seven other industries (link in Chinese), including petrochemical, chemical, construction materials, steel, nonferrous metal, papermaking and aviation. Companies that emit greenhouse gases equivalent to more than 26,000 tons of carbon dioxide a year will be included in the system.

It is expected that financial institutions will indirectly engage in the carbon market, as central bank Governor Yi Gang in April said that “the carbon market should be a financial market in nature and allow carbon financial derivatives trading.”

China appears to be serious about its intentions to migrate away from its reliance on coal (65%) for electricity generation. As a country’s economy progresses the relative value received from the health and wellbeing of citizens increases relative to the benefit gained from physical output. China crossed that barrier a decade ago so it is logical to expect greater focus on air and water resources. 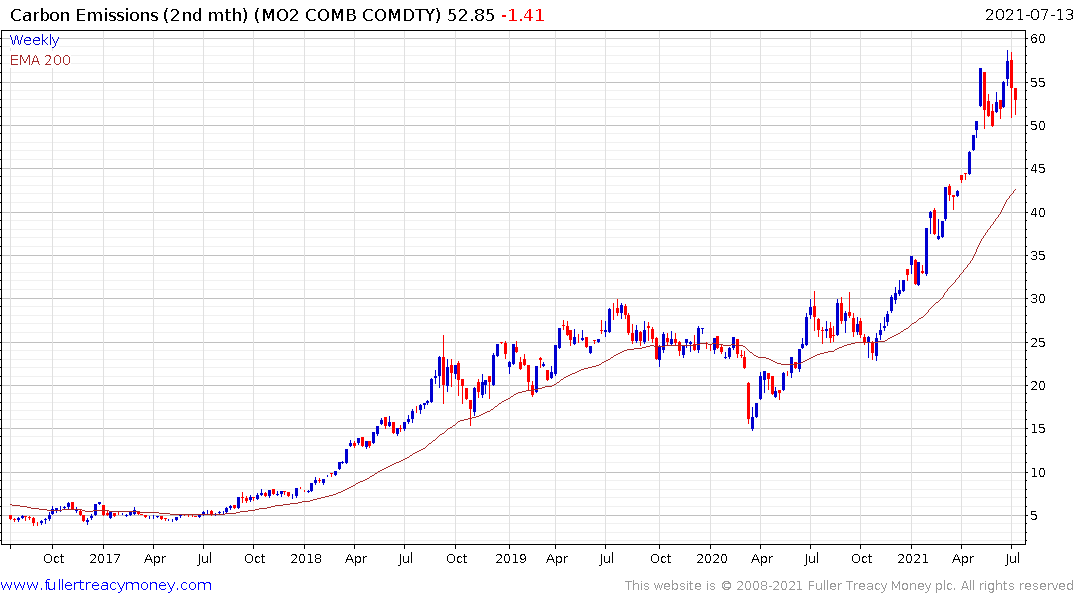 The creation of carbon trading markets is the preamble for significant speculation in carbon assets. The European market offers a proxy for governmental appetite for intervention in the economy and China’s market structure will be similar. There is a growing secular trend in the appetite of governments to reshape their respective economies and carbon markets offers a vehicle to trade that. In many respects it is a market in regulatory arbitrage.

The announcement this week that Europe is doubling down on its carbon trading system is an additional signal that the central planners are in the ascendency. Here is a section from an article detailing the sectors in line to be affected: https://www.bloomberg.com/news/articles/2021-07-14/the-seven-elements-of-the-eu-green-deal-you-should-care-about?sref=g4EhC0E7

What it will entail: The EU wants to use its world-leading carbon market to cut enough emissions to reach its new 2030 target. To do so, it plans to quicken the pace at which emission caps shrink each year, forcing manufacturers, power producers and airlines to curtail their carbon footprint more swiftly.

Here is a section from an article focusing on the repercussions for the shipping sector:

Transport & Environment described the leaked draft of the commission’s proposal as “an environmental disaster,” arguing the policy does not incentivize investment in low-carbon fuels such as renewable hydrogen and ammonia. Instead, it argues the proposal promotes liquefied natural gas and “dubious” biofuels as an alternative to marine fuel oil.

“It’s not too late to save the world’s first green shipping fuel mandate,” said Delphine Gozillon, shipping policy officer at Transport & Environment. “The current draft pits e-fuels against much cheaper polluting fuels, giving them no chance at all to compete on price. The EU should revise the draft to include an e-fuels mandate and make them more cost-attractive through super credits.” 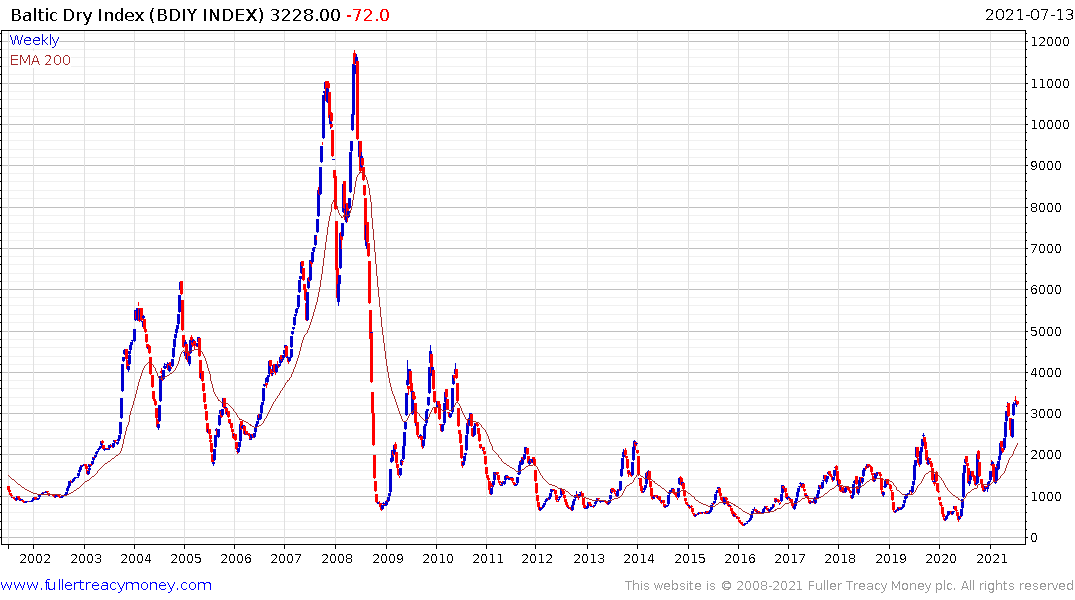 The Baltic Dry Index has completed its base formation. Taxing shipping will result in the costs being passed on to consumers. There is a running argument about inflation and whether it is persistent. At least in shipping, we can conclude there is nothing transitory about the impact of carbon taxes. 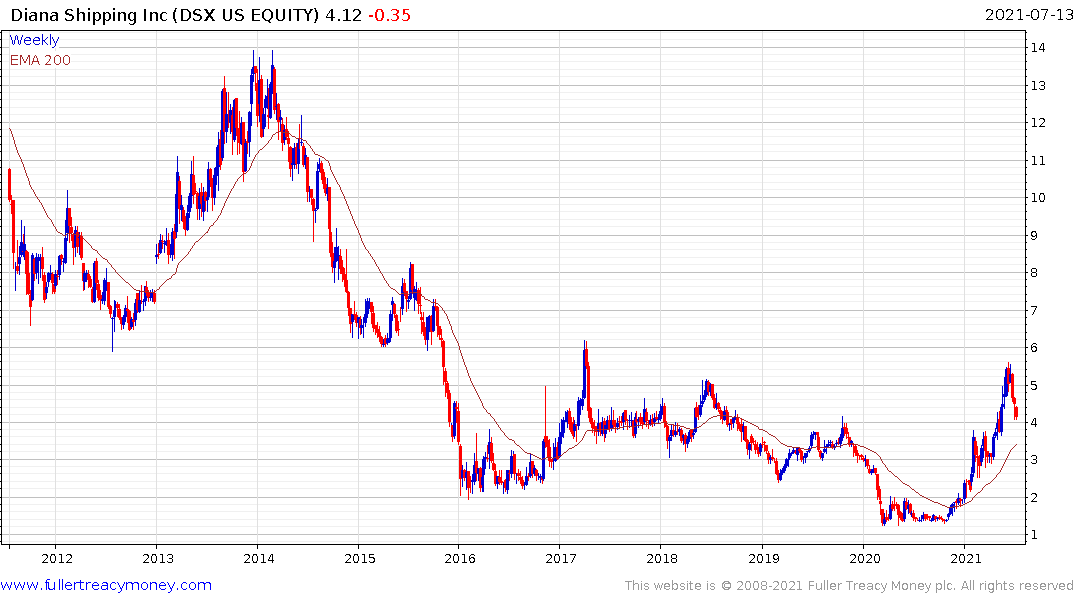 Diana Shipping has eased back over the last couple of weeks to test the upper side of the underlying range. A clear upward dynamic will be required to confirm support in the $4 area. 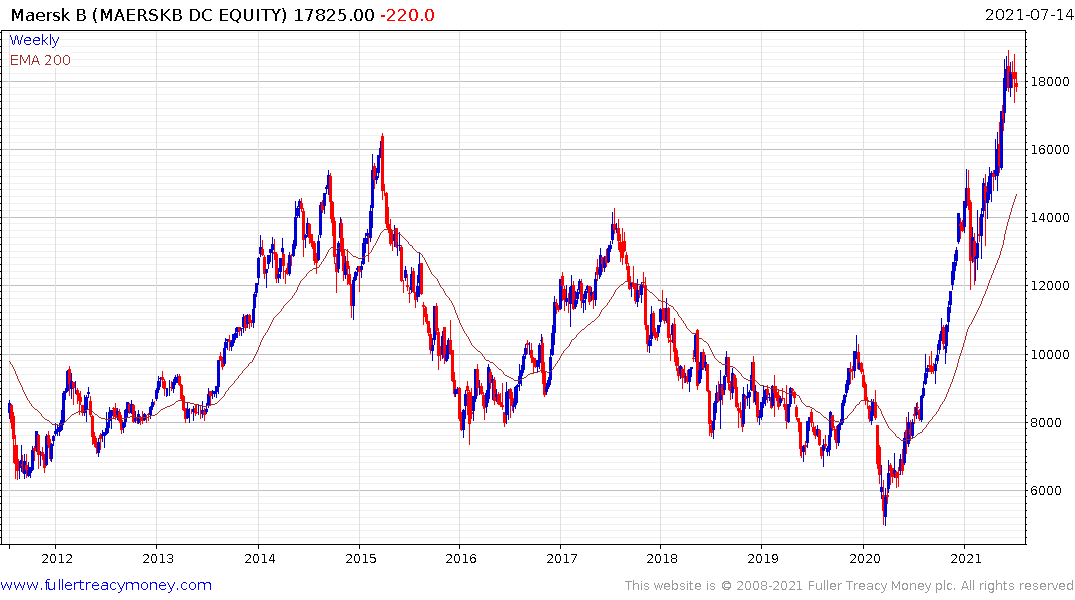 Maersk continues to exhibit relative strength but has paused over the last six weeks as it unwinds its short-term overbought condition.