“The arable area still requires significant tonnage of synthetic fertilizer, but this is reduced by the use of manures,” Butler said. Since the animal waste from his farm is not enough, he has been buying biosolids from utility Thames Water, which produces over 750,000 meters squared of sludge each year for farmers across Britain’s southeast.

However, Butler said that it’s increasingly difficult to source human excrement as “there is more demand than supply for biosolid materials.”

In the U.S., biosolids are regulated by the Environmental Protection Agency, and in Europe, biosolids have been in use since 1986 when it received regulatory approval from the European Union.

While manure is an inexpensive alternative to pricey synthetic fertilizers, it is a “poor replacement for those accustomed to traditional fertilizer products,” said Alexis Maxwell, an analyst at Bloomberg’s Green Markets. For example, the fertilizer diammonium phosphate has six times the nitrogen and 15 times the phosphate as manure on a per ton basis.

The farmer a mile from my old home in Ireland had a contract with the sewage treatment plant to buy waste. It made for a very smelly couple of days when he was spreading it on his land. However, it also meant he was not spending on costlier imports. That kind of business model has a lot more competition today, because of the surge in European natural gas prices which continue to recover from the October correction. 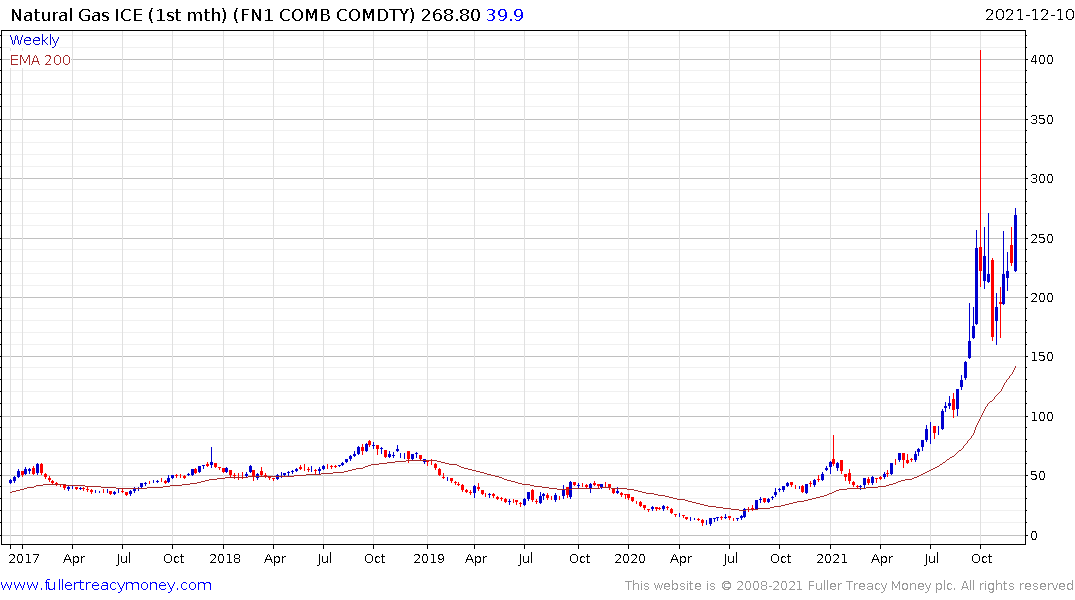 UK natural gas prices hit a new recovery high today and a break in the sequence of higher reaction lows would be required to question current scope for continued upside.

The performance of fertiliser stocks has been mixed despite the surge in the prices received for their products. That’s because the farm sector is being squeezed by commodity prices failing to keep up with the surge in costs for energy and fertiliser and labour is hard to source. 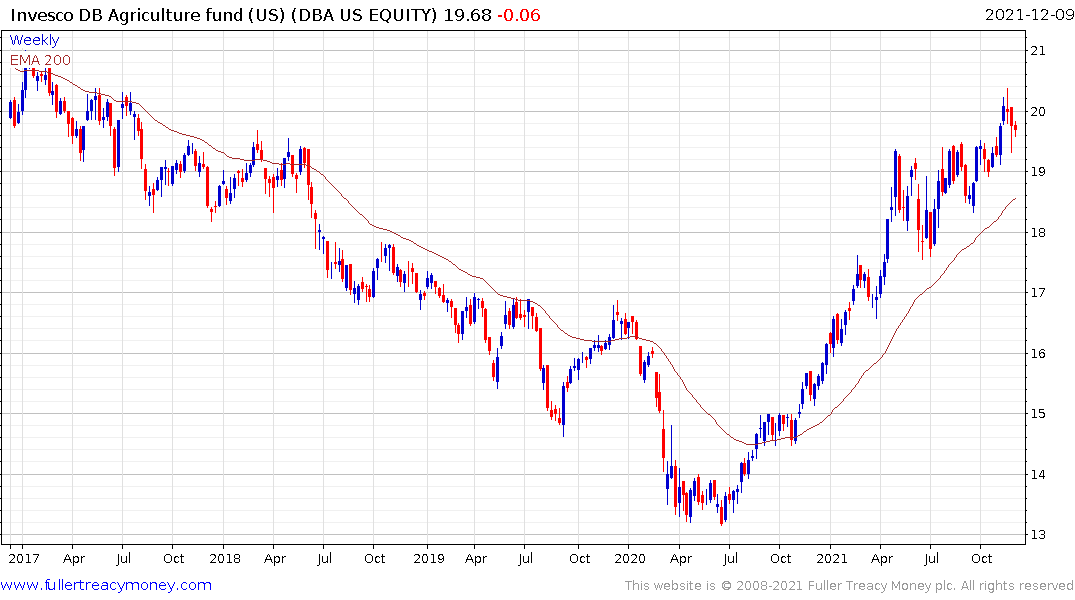 The Invesco DB Agriculture Fund remains in a medium-term uptrend but the advance has been modest over the last seven months. That may be about to change. 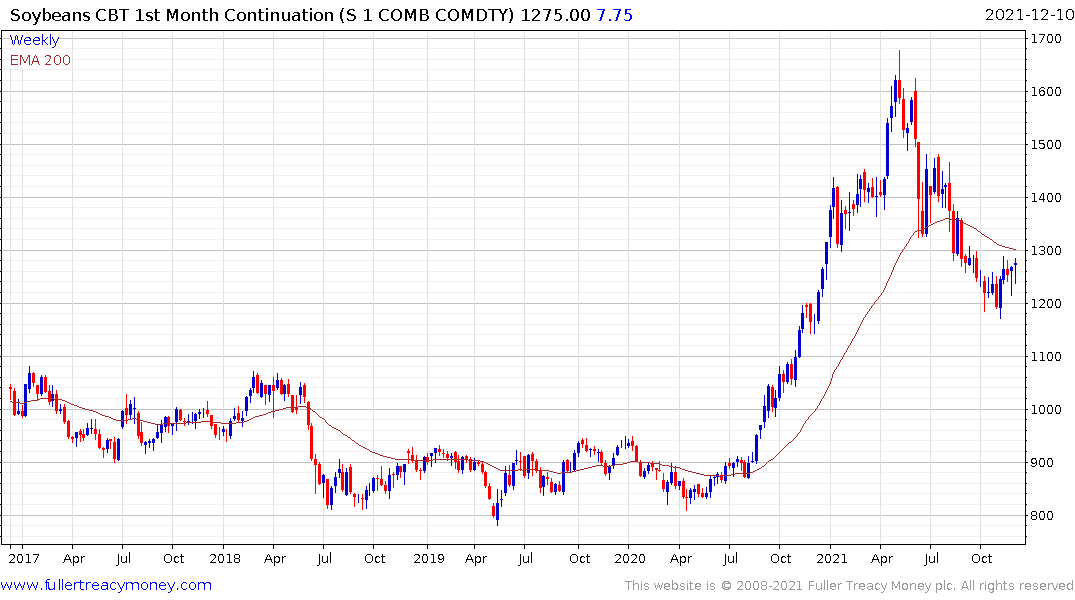 Soybeans are firming from the region of the trend mean. 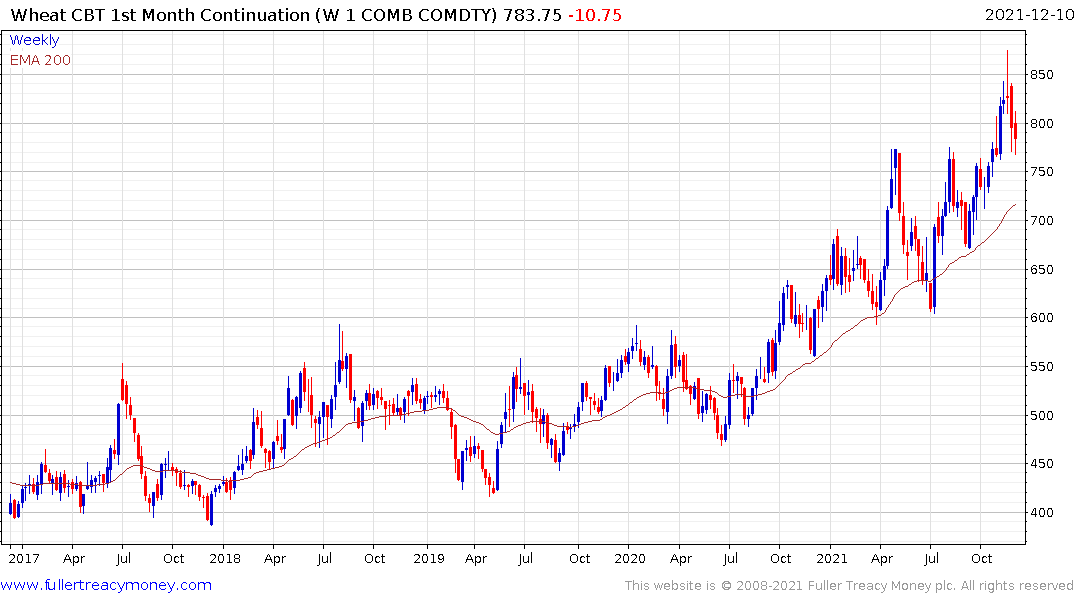 Wheat is beginning to firm from the region of the upper side of the underlying range. 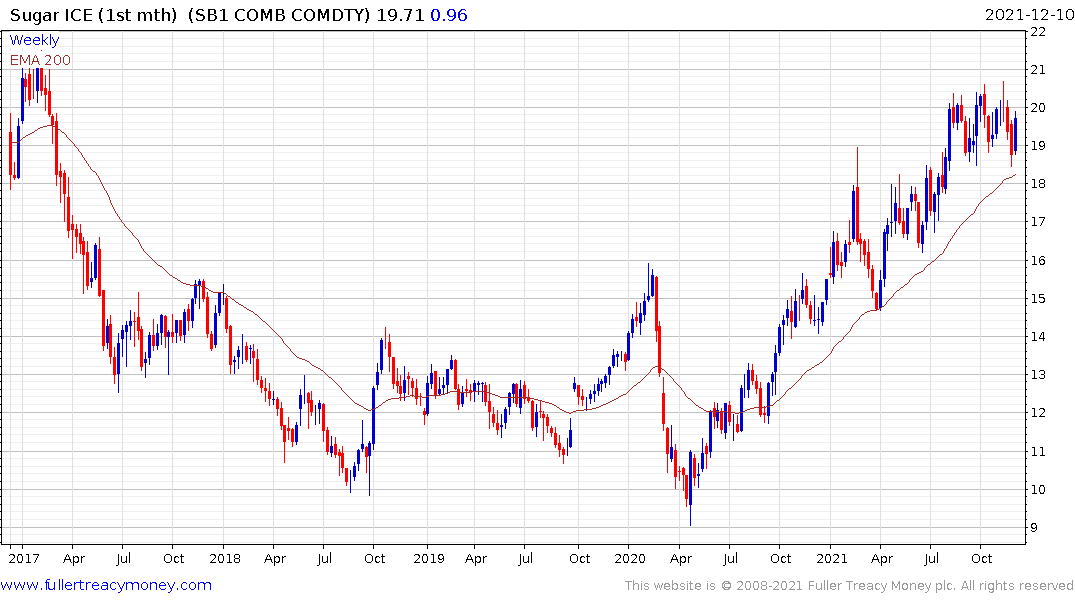 Sugar remains in a consistent uptrend. 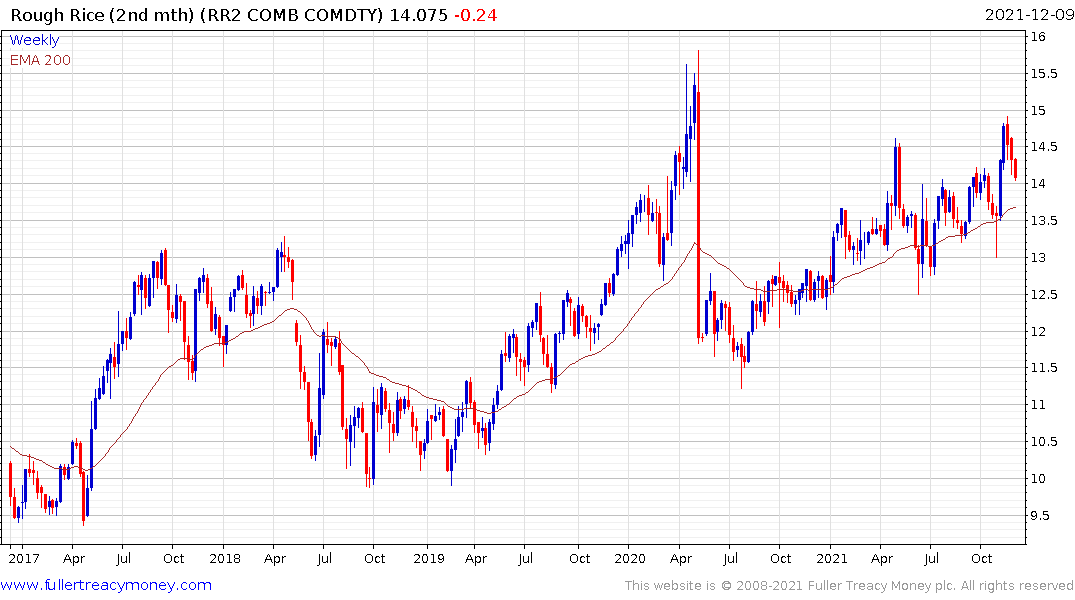 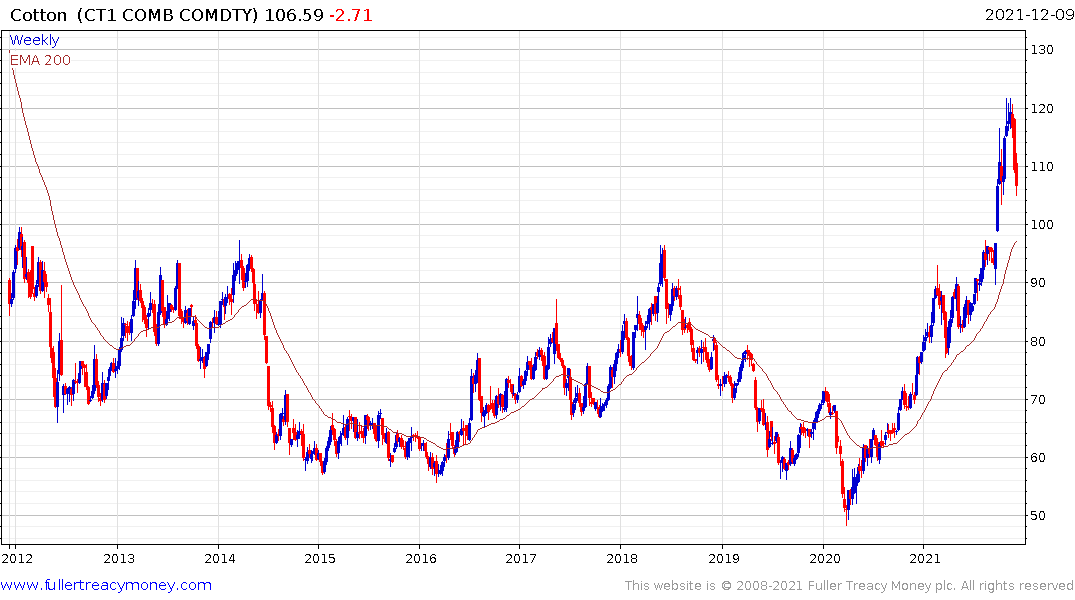 Cotton also looks set to hold the breakout from its base formation.

If these prices continue higher, that will enable farmers to afford fertilisers and incentivise them to spend. 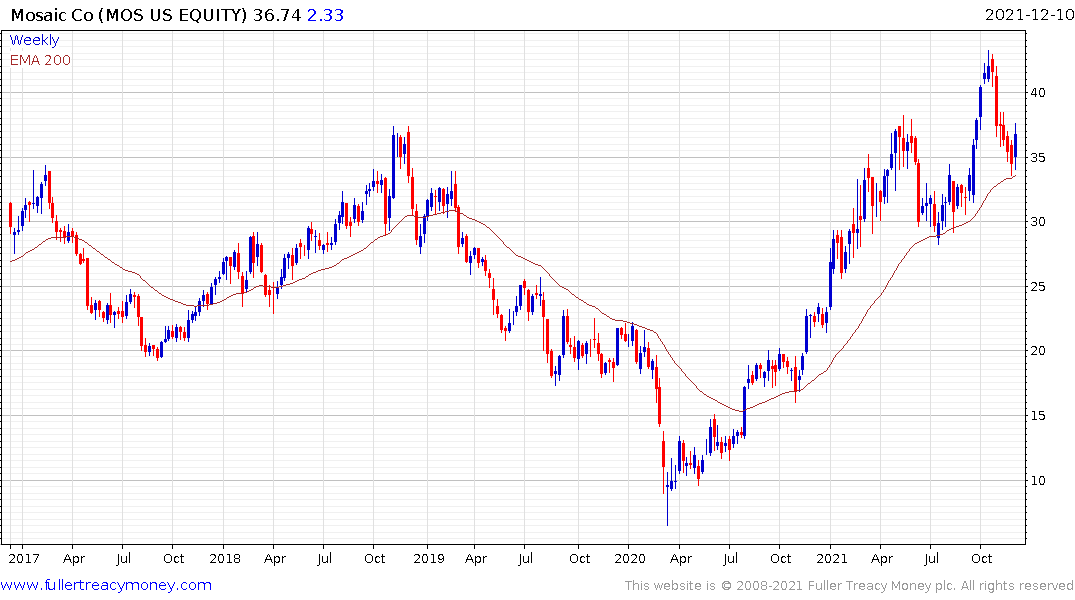 Mosaic is steadying from the region of the trend mean. 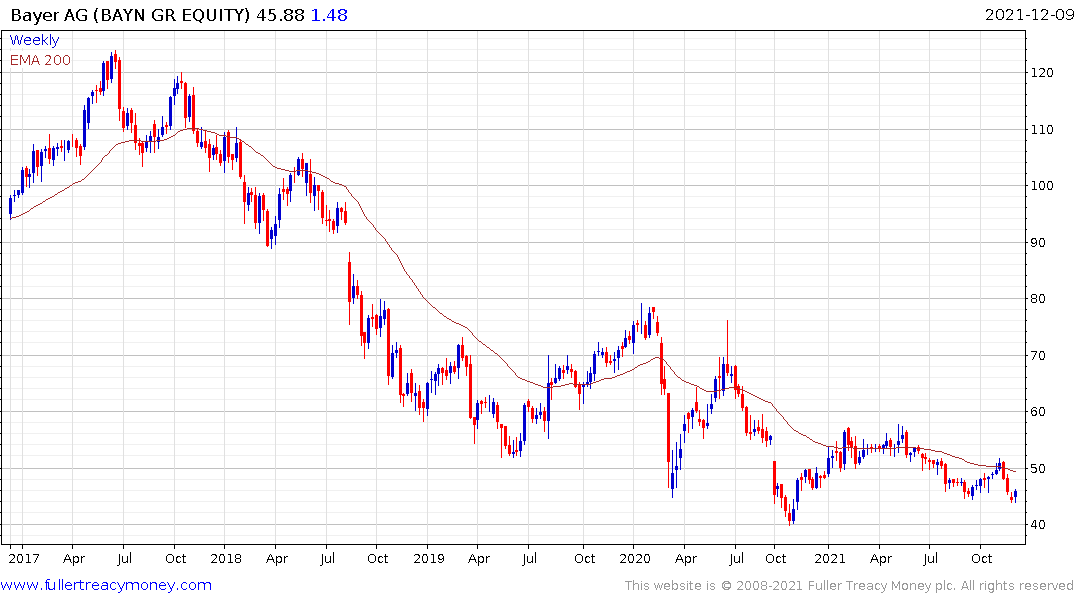 Bayer remains encumbered by uncertainty surrounding its Roundup exposure but the share is steadying from the region of the lows. 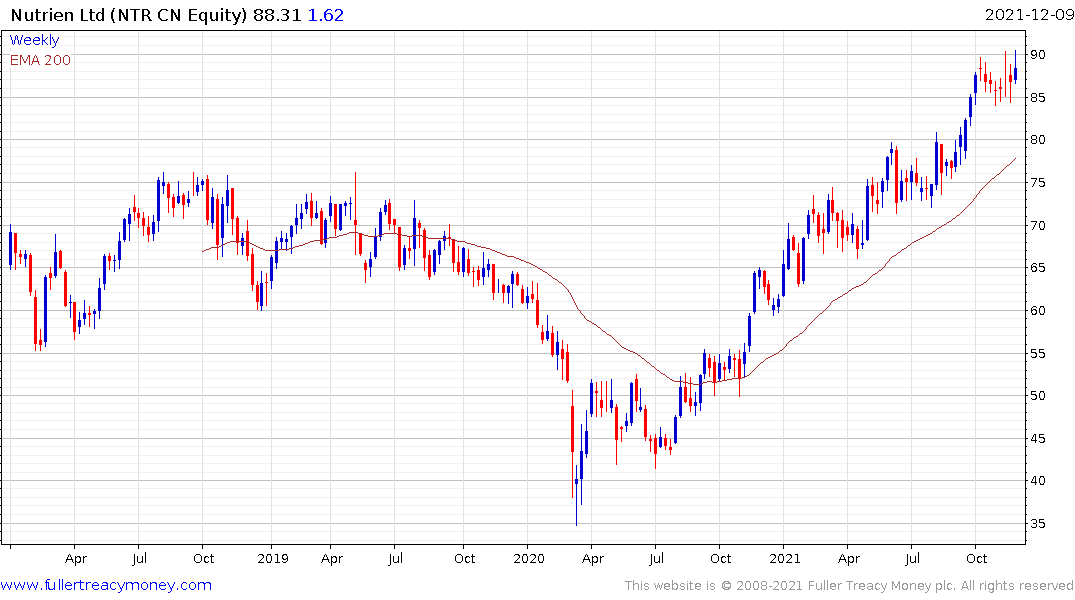 Nutrien remains in a consistent uptrend. 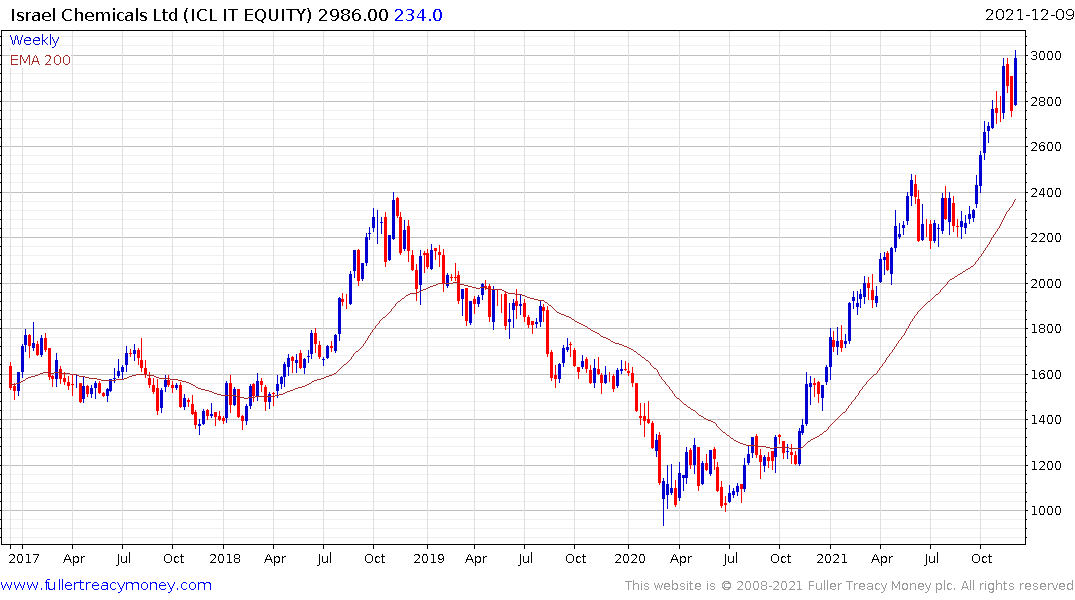 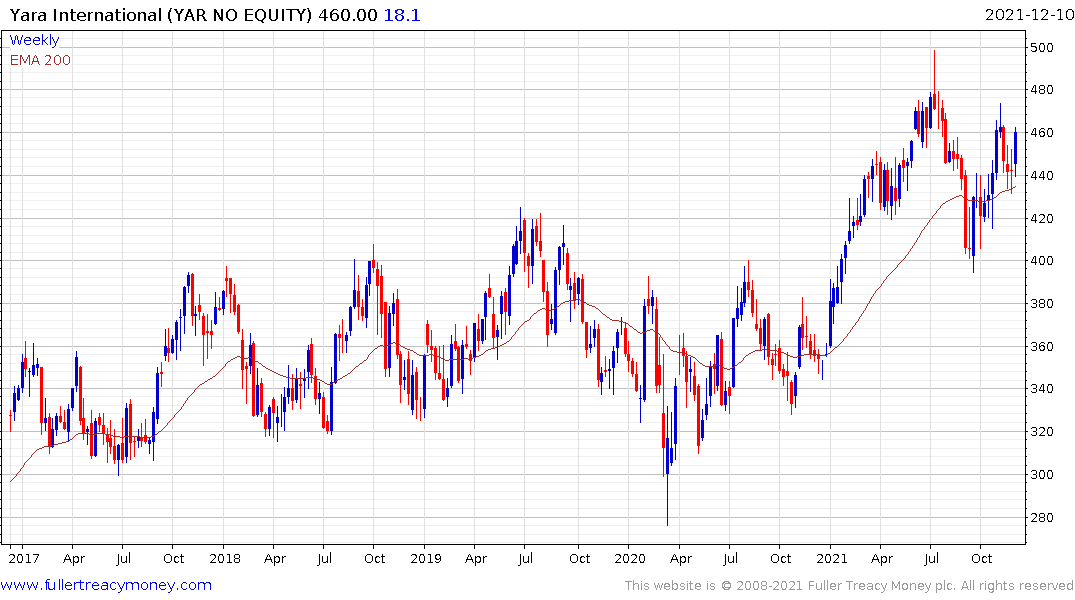 Yara International is consolidating in the region of the all-time peaks.