The world is a mess when it comes to carbon regimes — there are currently 64 carbon pricing systems globally, with another 30+ in development. Thirty of the existing systems are carbon markets, with the remaining 34 carbon tax regimes. Not only is there no agreement on a mechanism, but the prices within these regimes vary from the meaningless $0.10/tonne to an eye-watering $142.40/tonne — against a price widely seen as necessary now for Paris-alignment of $40-$80/tonne. This fragmented approach is clearly inefficient, and evidence tells us that so far, it is proving ineffective at a global level. Accordingly, to achieve real progress, we must find some way of integrating these individual regimes into one globally-fungible system. There are essentially four ways we could achieve this, using one, or a combination, of the methods mentioned below:

The first option is essentially via command and control directives, where governments/regulators simply mandate the amount of emissions that are allowed when and from which industries, with non-compliance penalized severely. While potentially effective, this is unlikely to be efficient, and almost certainly would not provide the lowest cost solution. This leads us to the three other, market-based solutions (which, it should be pointed out, are not mutually exclusive):

The first of these is a carbon tax on emissions, which could either be applied as a flat rate globally, or with differing rates for emerging and developed markets, potentially with differing ratcheting up speeds, to eventually bring the world into alignment.

The second option involves cap and trade systems, whereby allowances for emissions are granted and/or auctioned up to a (reducing) limit, with parties showing faster than prescribed progress allowed to sell their excess allowances to other slower moving parties — while still reaching the same cap.

The third option involves baseline and credit systems, whereby parties earn credits for reducing emissions, which could be sold to others in deficit, potentially within one of the two preceding mechanisms.

Each of these is fraught with complexities, both technical, and perhaps more importantly, political. Discussion of the pros and cons of each of these methods, the pitfalls and stumbling blocks, as well as how they might be implemented, forms the basis of this report.

With the latest big climate conference scheduled for this month there is a great deal of speculation about the possibility of world changing regulations being implemented. If the past conferences are any guide, the possibility of the world’s governments agreeing on an achievable zero- carbon goal by 2030 has to be treated as a low probability outcome.

Emerging markets may be willing to sign up to a global trading mechanism but only to the extent they get a significant discount on their own emissions. A globally fungible carbon price sees a very tall order and not least because China’s new emissions trading scheme massively underprices the commodity relative to Europe. When we add to that the EU’s intention to tax imports based on carbon intensity in manufacturing them, we get an idea of how far apart the sides are.

The most likely scenario appears to be a hodgepodge of uncomplimentary policies which will raise tax revenue, boost politically favoured projects, contribute to lower standards of living, higher costs and ultimately will fail to reach the goal of zero carbon emissions.

It would be a very welcome development if the world were suddenly to embrace next generation nuclear energy. Donating reactors, which cannot easily be used to develop weapons, to emerging countries would have an immediate effect on coal demand growth. Unfortunately, that seems as unlikely as a cohesive global carbon trading scheme. 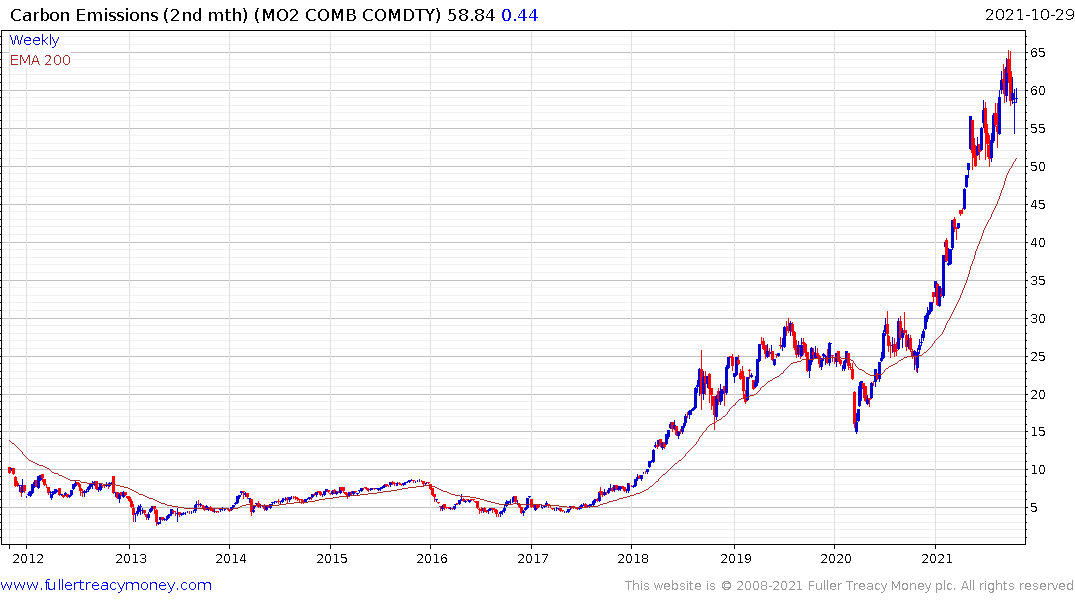 Meanwhile, the European carbon future continues to unwind its overbought condition as natural gas prices come down. Any significant pull back is likely to be a buying opportunity considering how eager Europe is to achieve energy independence.