Gleanings: "When Smart People Talk, We Listen"
Comment of the Day

Gleanings: "When Smart People Talk, We Listen" by Eoin Treacy

1. Invest in something when people say they never want to invest in it again, when they are throwing it out the window. Think about that.  We know people that liquidated their portfolios around the March 2009 lows vowing to never buy a stock again.  The same can be said about tech stocks as they were bottoming between November 2002 and May 2003.  Currently, the same thing is being said now about energy stocks, especially the midstream MLPs.

3. The more people ridicule and question you, the more likely you are probably onto a good thing no matter what it is. This was like us buying oil sands stocks in the late 1990s when everyone was buying tech.  Or like when we bought tech stocks near the end of 2002; and, what we are doing now in buying the out of favor energy stocks.

4. Don’t invest in an area just because it is depressed, find and wait for the change and invest just before it happens while still unrecognized by the market. My father use to tell me, “Good things happen to cheap stocks,” but stocks can stay cheap for a really long time if other investors do not recognize their cheap valuations.  The charts will tell you when other investors will recognize them too.

Many investors seeking to follow the buy-low-sell-high maxims laid out in this report are hunting for sectors that look cheap by historical standards. The most obvious candidate is the energy sector which is still struggling with the profound changes unconventional supply have wreaked, not to mention the anticipated surge in demand for electric vehicles.

The pipeline sector, which is primarily set up as master limited partnerships, is flow dependent but is being priced as if the oil market is going into imminent reversal. A number of the largest companies have been deserted by investors, because they cut their once impressive dividends, but with oil back at its highs for the year there is an argument for bargain hunting. 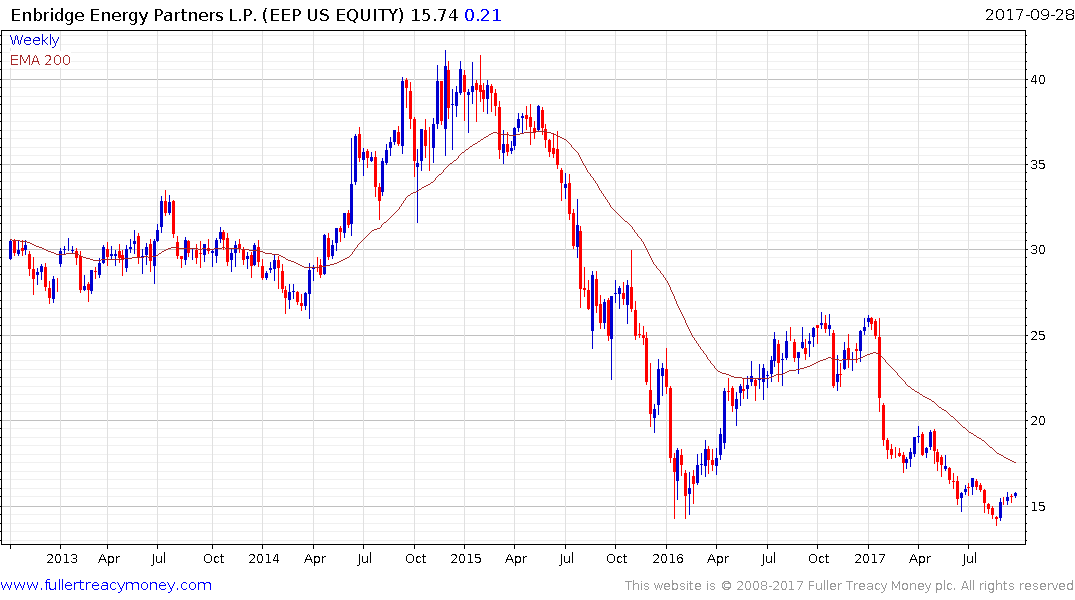 Enbridge Energy Partners LP cut is dividend by 20% in January and the share has collapsed back to below the early 2015 nadir. It now yields 8.96% and has steadied over the last couple of weeks but needs to hold the $15 area if potential for an additional reversionary rally is to be given the benefit of the doubt. 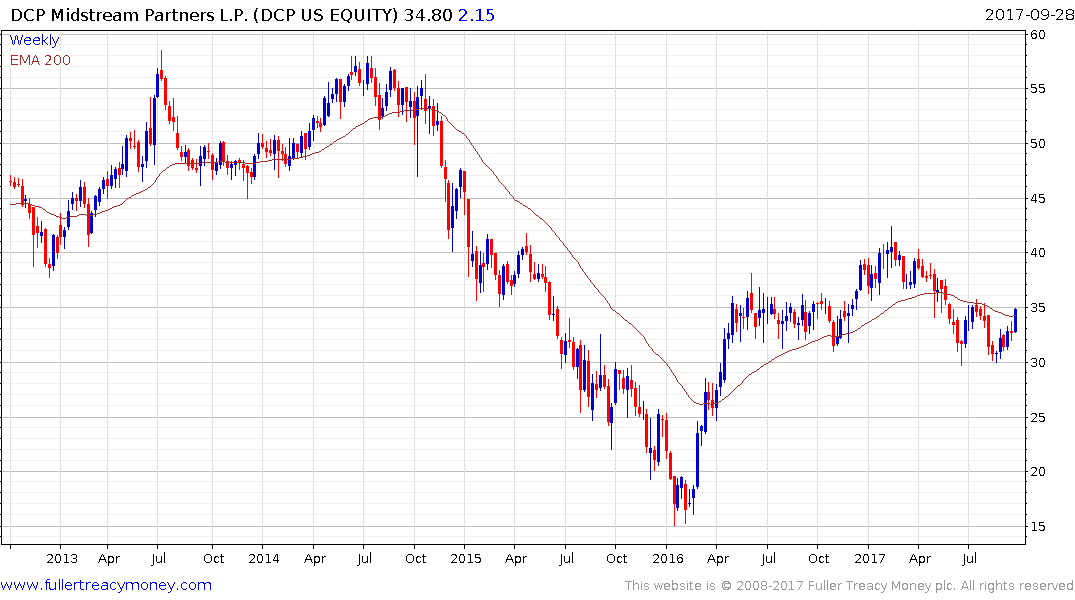 DCP Midstream is a midstream gas company and did not cut its dividend. The share is currently firming from the $30 area and a sustained move below it would be required to question medium-term scope for additional upside. 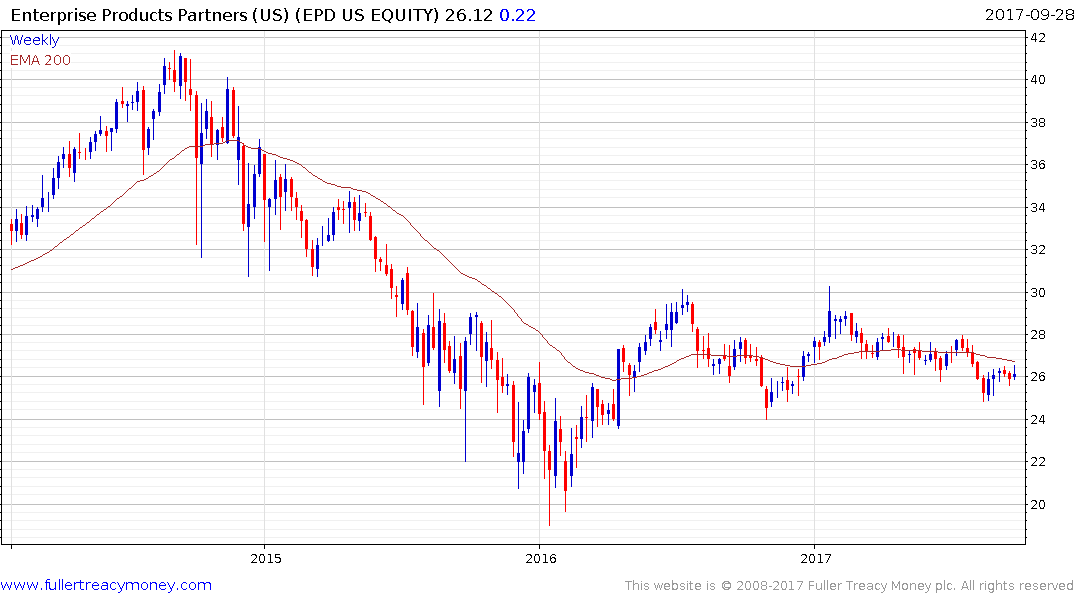 Enterprise Products Partners also did not cut is dividend, currently yields 6.44%, and shares a similar pattern. 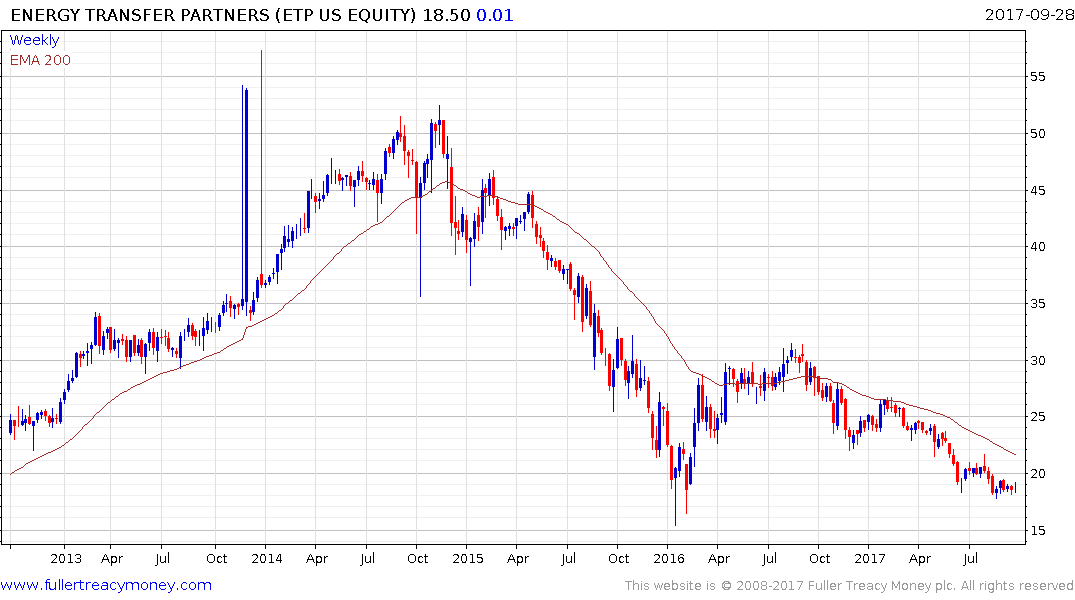 Energy Transfer Partners is an outlier because it’s share is back testing the 2015 low but it has not cut its dividend. It currently yields 11.97%. Of course, that might suggest investors have concluded a dividend cut is inevitable. The share has held a progression of lower rally highs since late last year and will need to at least sustain a move above $20 to confirm a return to demand dominance.