Chief Executive Officer Elon Musk announced in November that Tesla planned to build a plant outside Berlin. The facility is expected to produce Model 3 sedans and Model Y crossovers starting in 2021.

Fiat Chrysler is going to launch a new version of its Fiat 500 battery-powered vehicle in Europe this year, along with plug-in hybrid versions of its Jeep Compass, Renegade and Wrangler models. That, combined with the Tesla credits, should make the company compliant with Europe’s emissions rules, CEO Mike Manley told analysts in July.

While Fiat Chrysler would otherwise struggle to meet new carbon-dioxide emissions standards in Europe, the so-called open-pool option available in the European Union allows automakers to group their fleets together to meet targets.

Getting your competitors to pay for a factory, which you will then use to produce cars aimed at putting them out of business is a narrative that is so farfetched it would be unlikely to ever pass muster as a movie script. Yet, it is reality in the growth killing market designed by the bureaucrats ruling the EU. Is it any wonder the UK voted to leave? 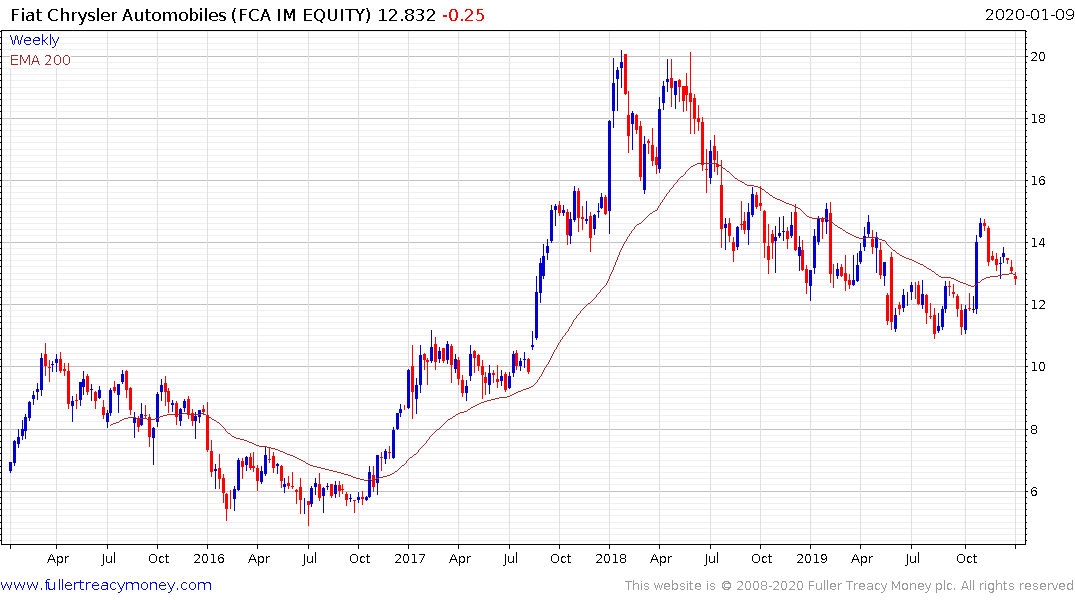 Fiat Chrysler employs nearly 200,000 people and generates about 65% of revenue from the NAFTA region of the USA, Canada and Mexico. It’s hard to imagine how conventional manufacturers will be able to compete with pure electric/fuel cell companies as production costs for the latter compress with scale. That is the primary dilemma facing the sector. Radical transformation is politically untenable considering the number of people the companies employ. Therefore, the most likely scenario is a torturous decline.

The valuations on the automotive sector are in the single digits and the share prices for many stocks have just broken lengthy medium-term downtrends on improving sentiment about global growth. That suggests scope for some additional upside in the first half of the year but the medium-term headwinds will need an answer to justify a medium-term bullish outlook. That means this is a trader’s market rather than an investor's market because of the risk of value traps.