Fiat Chrysler and Foxconn plan Chinese electric vehicle joint venture - This article from Reuters may be of interest to subscribers. Here is a section:

FCA last month reached a binding agreement for a $50 billion tie-up with France’s PSA (PEUP.PA) that will create the world’s No. 4 carmaker. FCA said that the proposed cooperation was initially focused on the Chinese market.

It “would enable the parties to bring together the capabilities of two established global leaders across the spectrum of automobile design, engineering and manufacturing and mobile software technology to focus on the growing battery electric vehicle market,” it said.

FCA said it was in the process of signing a preliminary agreement with Hon Hai, aiming to reach final binding agreements in the next few months.

However, it added there was no assurance that final binding agreements would be reached or would be completed in that timeframe.

Foxconn has been investing heavily in a variety of future transport ventures for several years, including Didi Chuxing, the Chinese ride services giant, and Chinese electric vehicle start-ups Byton and Xpeng.

Foxconn also has invested in Chinese battery giant CATL and a variety of other mostly Chinese transportation tech start-ups.

This is an example of the most profound change batteries are bringing to the automotive sector. They are rapidly commoditizing the car. The difference between an Apple, Samsung or Google phone is less about what is on the inside than familiarity with the brand, ease of operation. software, the app ecosystem and the camera. Other than that, they all have pretty much the same internal composition with some minor differences in the design of the chips while manufacturing is outsourced to a third party.

That exact same model is a lot easier to deploy for electric vehicles than for internal combustion engines because they have considerably fewer parts and the battery represents the largest upfront cost. As battery costs continue to trend lower the fate of national auto manufacturing will be challenged by the ability of companies to innovate in sectors such as in-car entertainment to autonomous driving where they do not have a natural competence. There is obviously the challenge of creating a better electric motor but that is unlikely to ever really figure highly in the minds of consumers when the added extras now being sold become standard in commoditized vehicles. 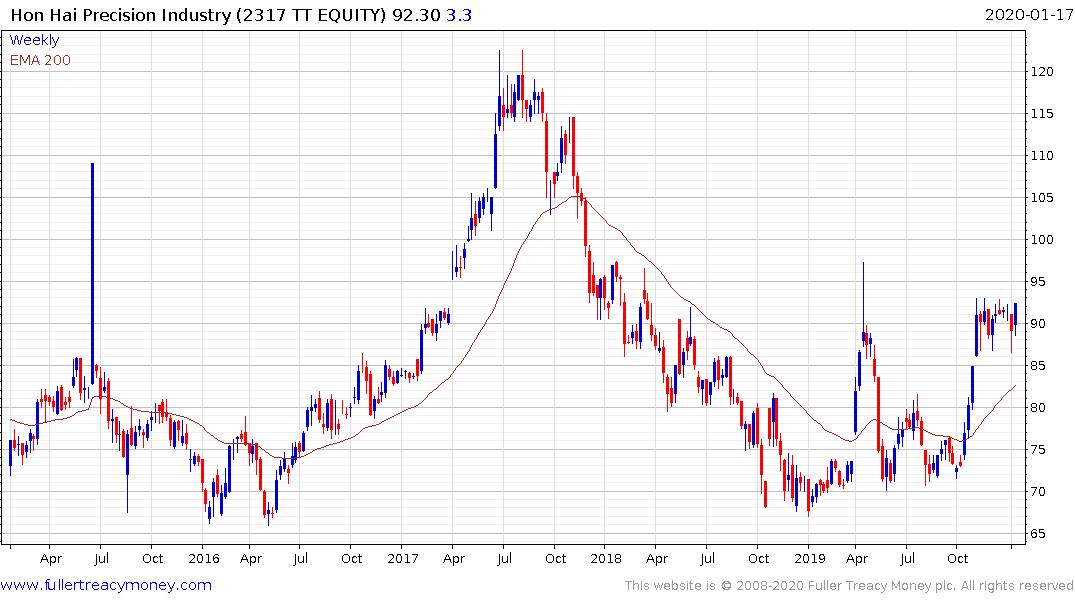 Hon Hai Precision is accustomed to performing at scale on thin margins. That brings a degree of competence to manufacturing that represents a significant threat to all auto manufacturers. The share is firming within the first step above the base it formed in 2019. A sustained move below TWD80 would be required to begin to question medium-term scope for continued upside.