Fed Cuts Rates by Quarter Point, Hints It May Be Done for Now
Comment of the Day

Fed Cuts Rates by Quarter Point, Hints It May Be Done for Now by Eoin Treacy

Federal Reserve officials reduced interest rates by a quarter-percentage point for the third time this year and hinted they may be done loosening monetary policy, at least for one meeting.

The Federal Open Market Committee altered language in its statement following the two-day meeting Wednesday, dropping its pledge to “act as appropriate to sustain the expansion,” while adding a promise to monitor data as it “assesses the appropriate path of the target range for the federal funds rate.”

As with the September statement, the FOMC cited the implications of global developments in deciding to lower the target range for the central bank’s benchmark rate to 1.5% to 1.75%.

Treasuries weakened on the Fed’s announcement, pushing the 10-year yield up briefly to 1.81% from 1.80%. Stocks were little changed and the U.S. dollar gained. Traders also pared wagers on a fourth consecutive rate cut in December.

The Fed has been of the opinion we are in the midst of a mid-cycle slowdown. I think we can think of that as a best-case scenario which is why there is so much uncertainty about the outlook for rates amid the surge in bond prices. Let’s see what the charts tell us. 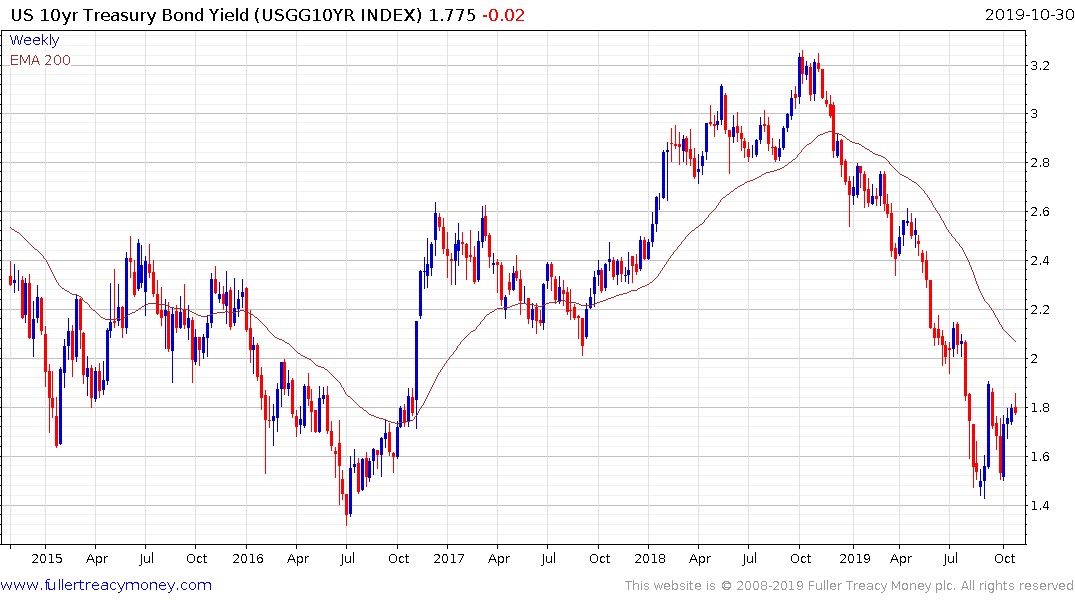 The 10-year Treasury yield has found at least a near-term and, quite likely, a medium-term low near 1.5%. That view is support by the size of the upward dynamics and the proximity of historic lows. A sustained move below the 1.5% level would be required to question that view. 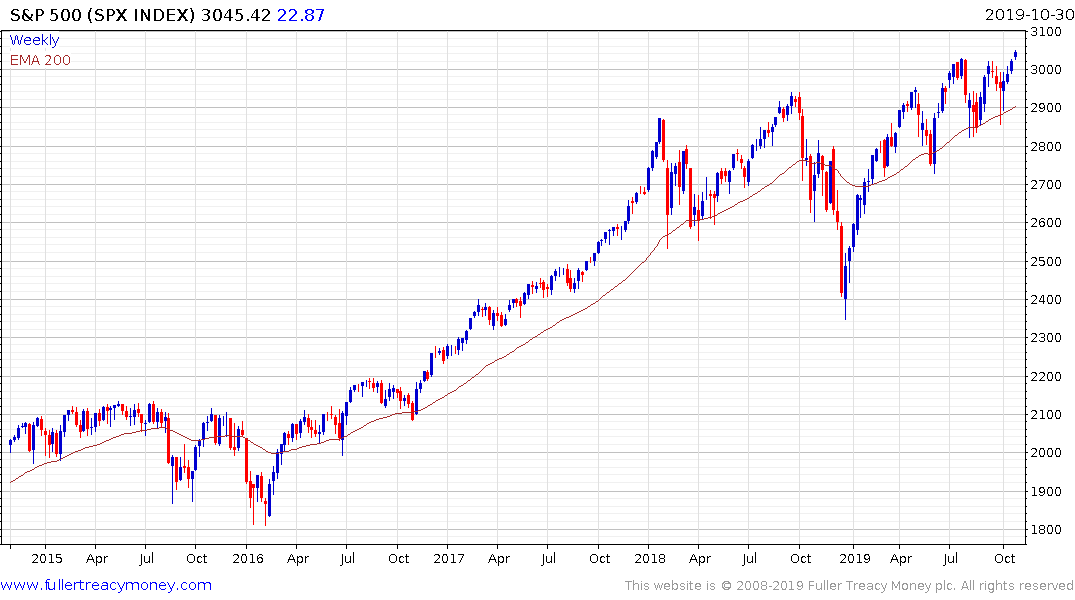 The continued strength of the Wall Street also is supportive of the view that monetary policy beats most other factors most of the time and the Fed has adopted an accommodative stance. 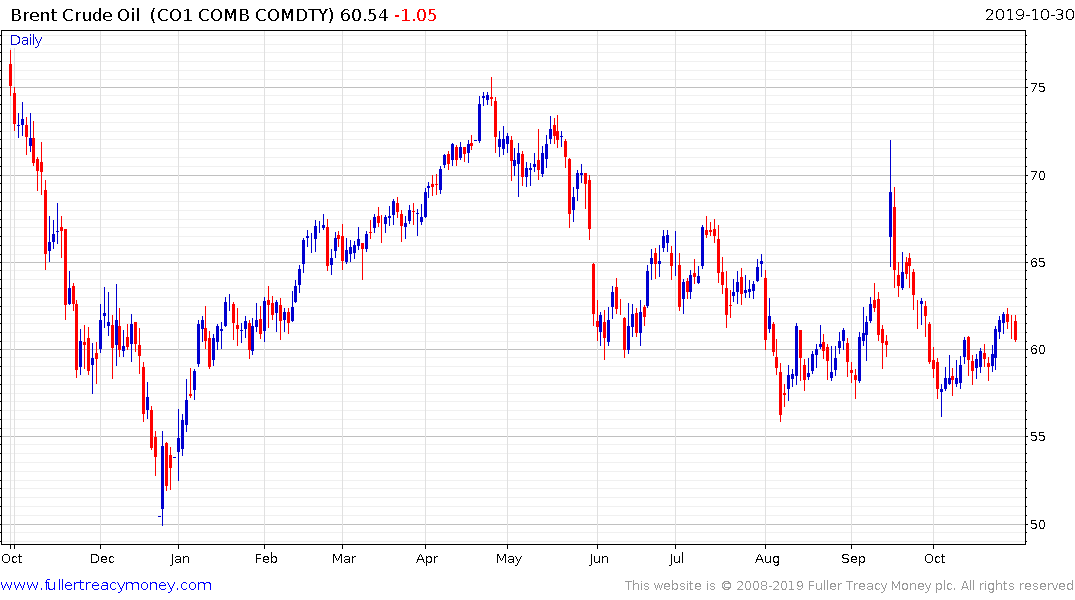 Crude oil is not at challenging levels and continues to hold a downward bias overall, despite recent steadying around $55. 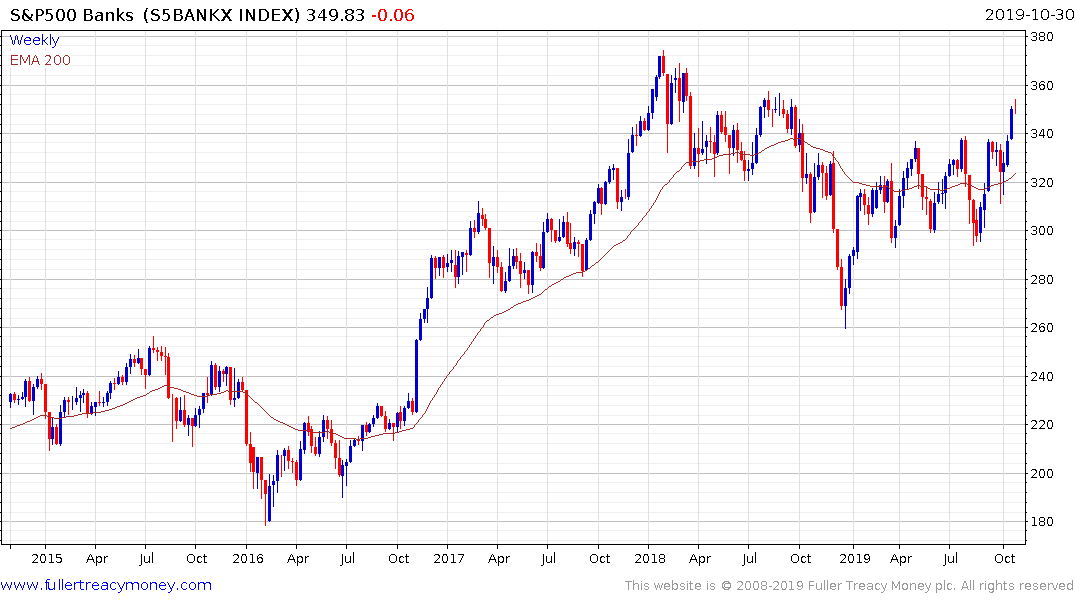 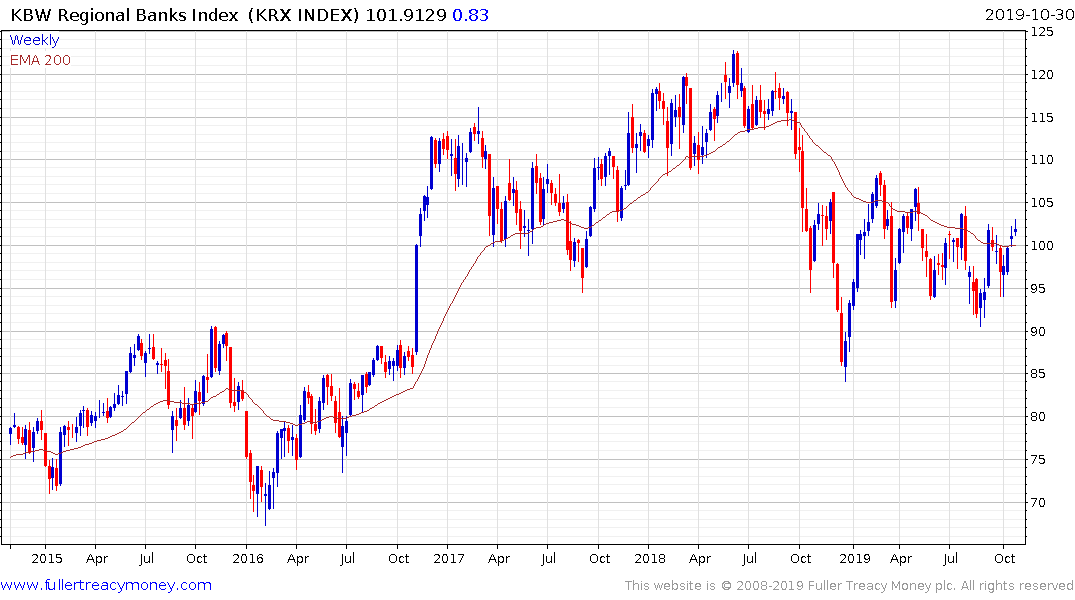 The S&P500 Banks Index has broken upwards and the KBW Regional Banks Index rallied this week to break is sequence of lower rally highs. A return to demand dominance by banks is supportive of the bull market hypothesis. 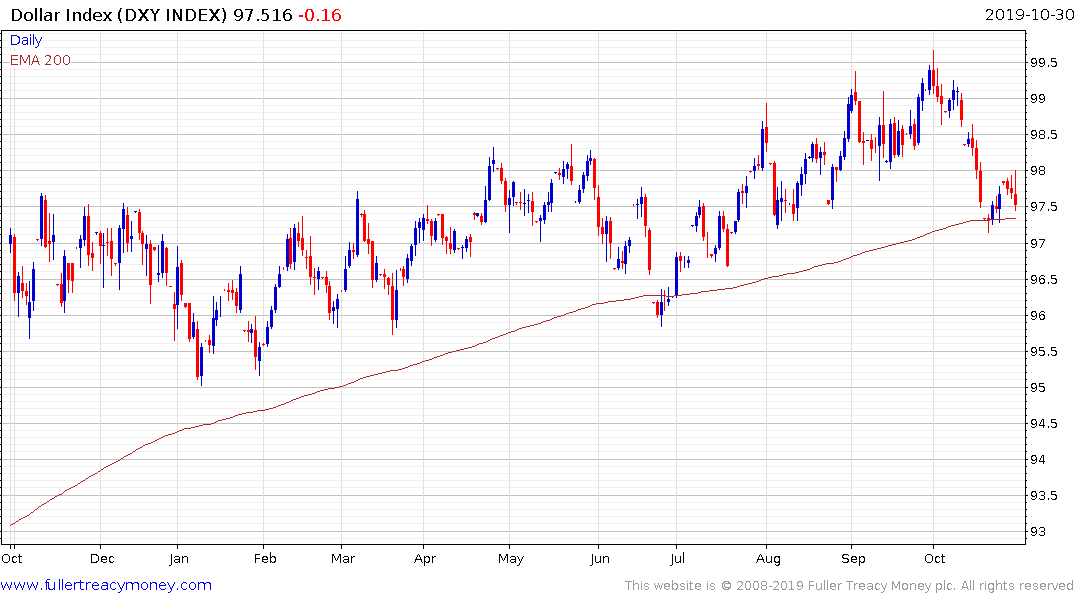 The Dollar index reversed an earlier advance to return to test the region of the trend mean. A sustained move below the 97 would be required to question the slow pace of higher to lateral ranging. However today’s reversal does suggest traders are questioning the Fed’s tailwind a pause in interest cuts should offer.

The recovery in the outlook for Europe and Japan is an additional positive. 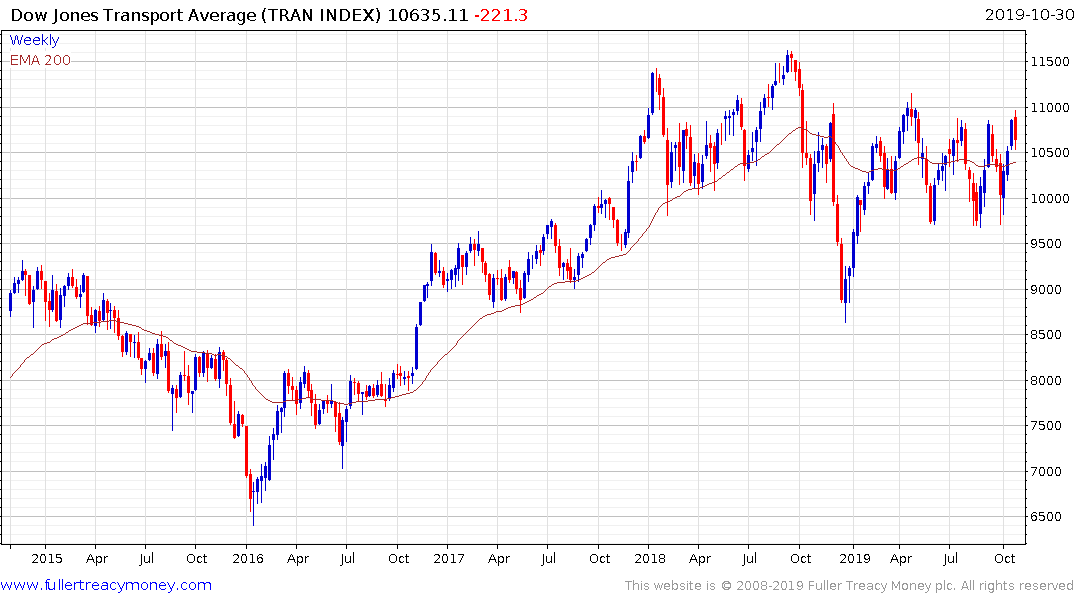 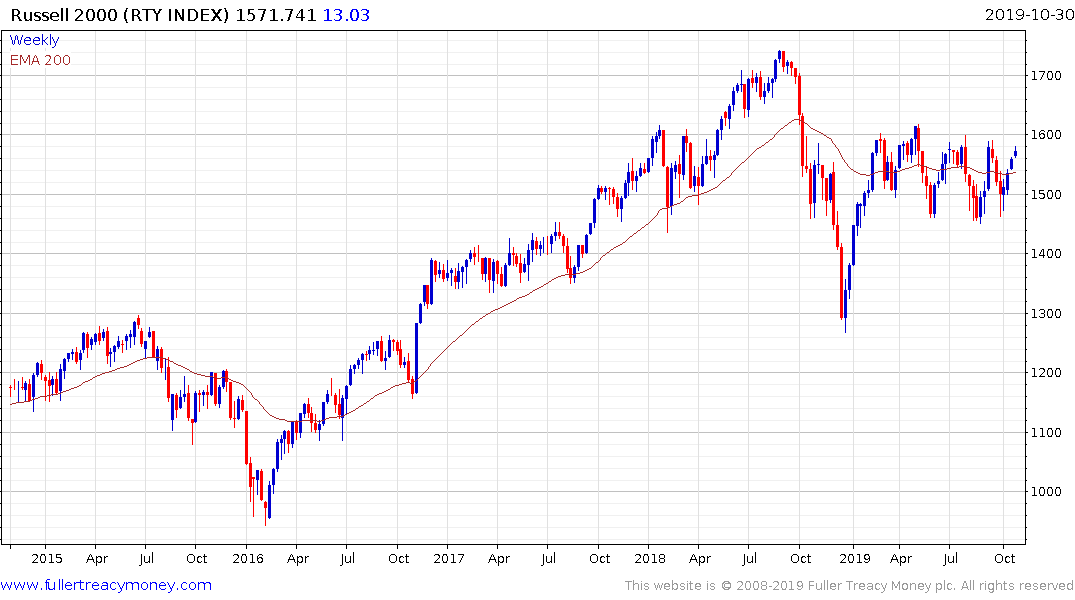 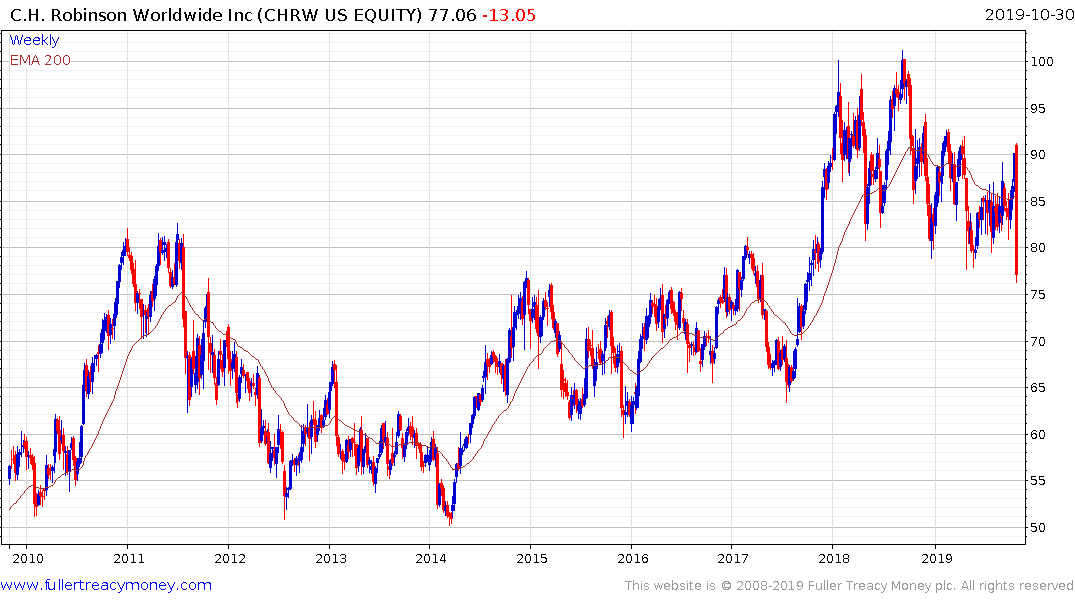 The Russell 2000 is pausing at the upper side of its range but will need to sustain a move above 1600 to confirm a return to demand dominance. 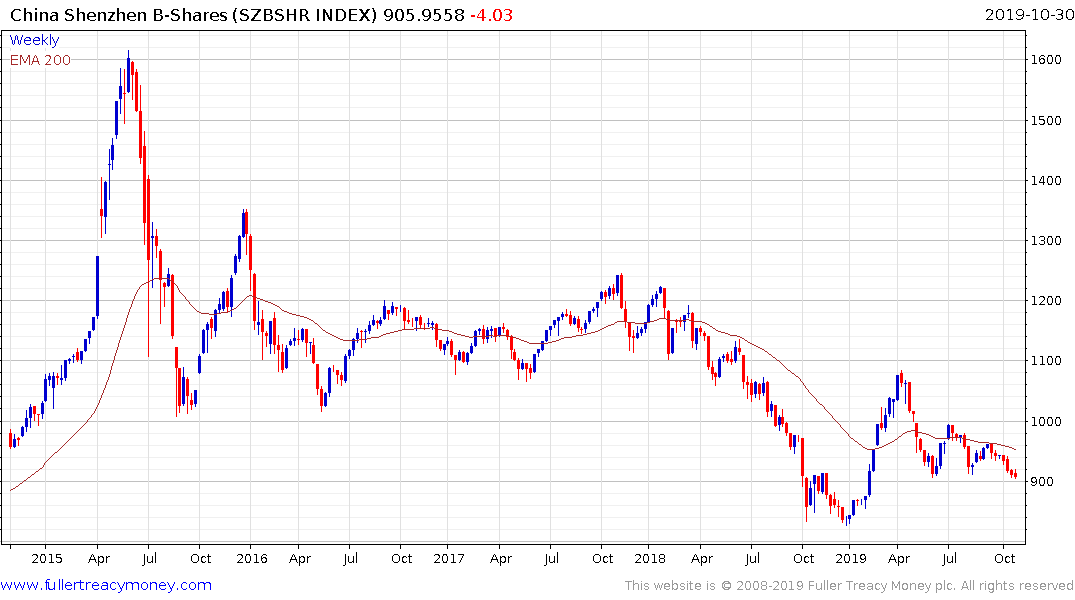 The thing I worry about is the continued downward pressure on the Shenzhen B-Shares and what that means for China. This Index has far fewer distortions from state-owned companies and it is testing its lows. It needs to bounce emphatically to question supply dominance.