Electricite de France SA said last week it will halt four reactors accounting for 10% of the nation’s nuclear capacity, straining power grids already faced with the prospect of a spell of cold weather. At the beginning of January, almost 30% of France’s nuclear capacity will be offline, increasing the country’s reliance on gas, coal and even oil.

“If we have a very, very cold day, it could be problematic, especially if we have to import and our neighbors have problems as well,” said Paris-based Anne-Sophie Corbeau, a research scholar at the Center on Global Energy Policy at Columbia University. “This is the domino effect we need to fear. But electricity will be expensive, there’s going to be a cost to pay.”

German power for next year jumped to a high of 335 euros a megawatt-hour, following a 25% rally on Tuesday, before slipping back. The French equivalent rose as much as 2.5% to record of 408 euros. Prices gained amid thin holiday trading even as gas declines. There was also speculation some traders may be closing short positions due to rising capital requirements from exchanges.

“The strength in the French market has been the main engine -- aside from gas prices -- of strength in neighboring markets, including Germany, in recent days,” said Glenn Rickson, head of European power analysis at S&P Global Platts.

“I also suspect that any big moves ahead of the run-up to Christmas have as much to do with the thinness of the market and traders needing to close short positions ahead of shutting down for the holidays as anything else.”

Soaring gas and power prices have already forced European utility giants from RWE AG to Uniper SE to boost liquidity requirements. Many smaller suppliers didn’t have the same option, with more than 20 going out of business in the U.K. alone.

Half of the UK’s energy traders/providers have gone out of business since the spike in natural gas prices began. The survivors will be the best capitalised companies that can ride out this volatility. They will also benefit in future from capturing market share during this tumultuous period. 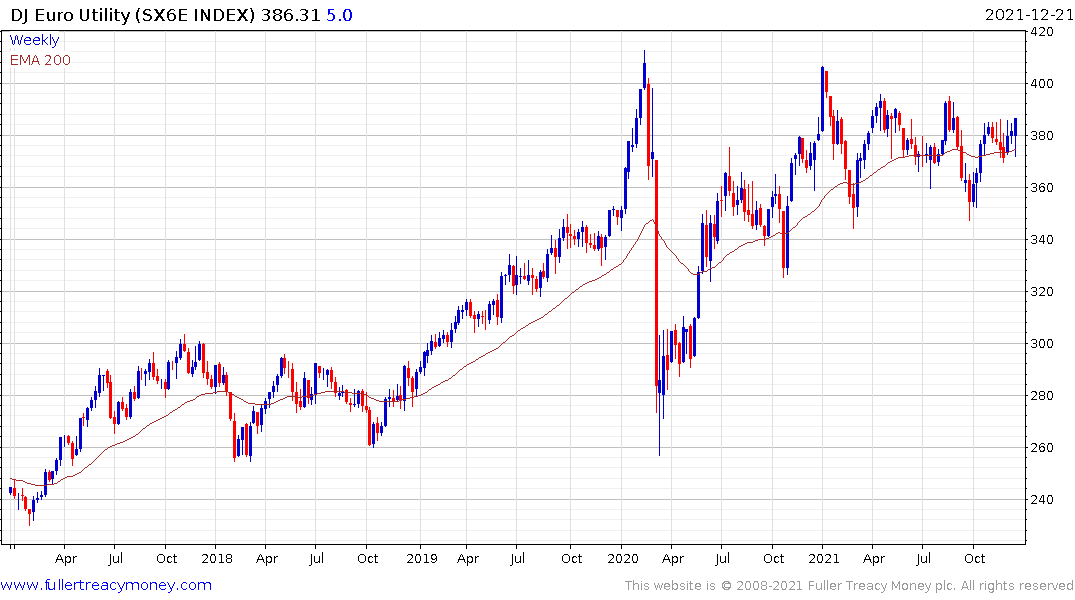 The Euro STOXX Utilities Index has been ranging since before the pandemic but is currently firming from the region of the trend mean. 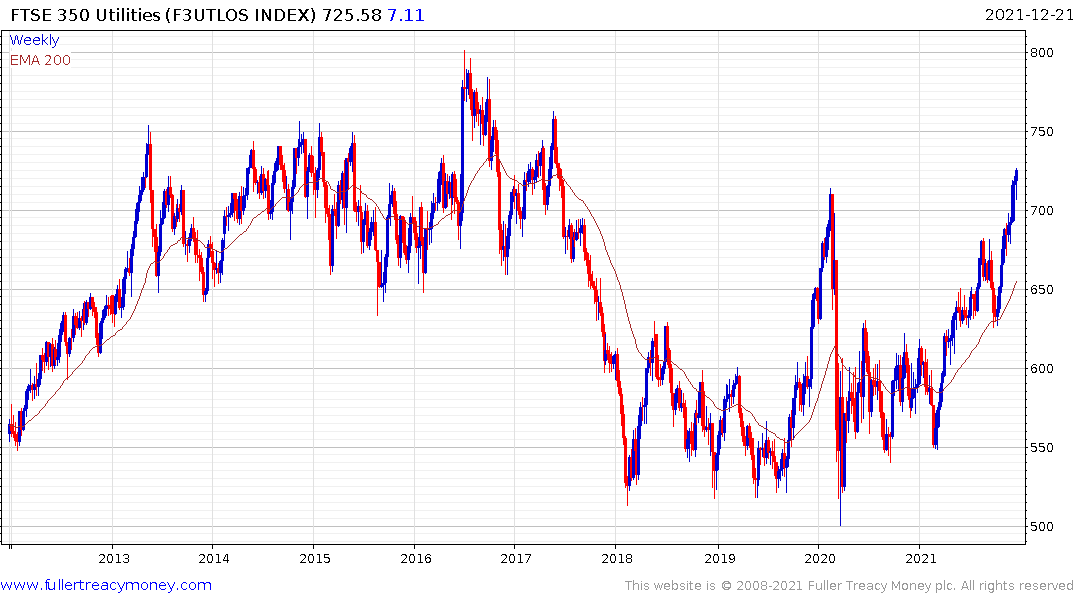 The FTSE-350 Utilities broke out to new recovery highs this month. A clear downward dynamic would be required to check momentum. 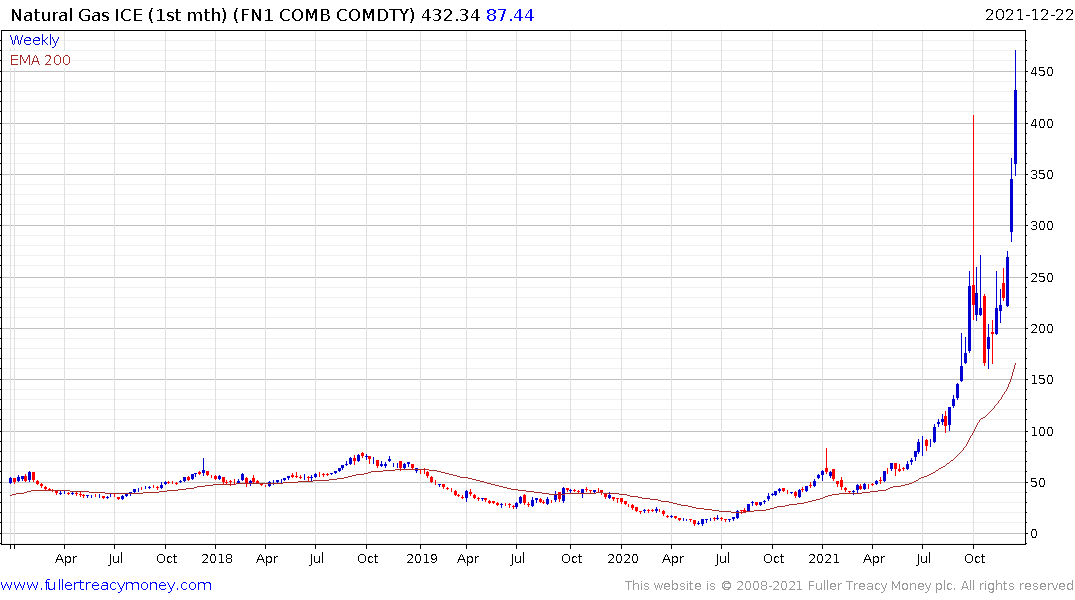 UK natural gas futures paused today following yesterday’s surge to new highs. The challenge is the price is very susceptible to weather variations. A frost cold snap in Europe with low winds, against a background of continued low supply would put additional upward pressure on the price.

This story from newatlas.com highlights the activation of the UK’s Hornsea 2 wind farm. Here is a section:

Taking the "world's largest" title with its 1.32-GW capacity, Hornsea 2 is located 89 km (55 miles) off the east coast of the UK and features 165 of Siemens' Gamesa 8-MW wind turbines. The offshore substation and reactive compensation station were installed in October this year, allowing operator Orsted to achieve the farm's first power.

While these farms at Hornsea are the biggest of their type, the world of offshore wind is a fast-moving one, with the "world's largest" title changing hands a number of times over the past decade or so. The 630-MW London Array came online in 2013 to take the mantle from the 500-MW Greater Gabbard Offshore Wind Farm, before the 659-MW Walney offshore wind farm then claimed it in 2018.

Last year, we saw construction kick off on the Dogger Bank Wind Farm near the coastal village of Ulrome in England. It will feature the world's largest offshore wind turbine, the 853-ft-tall (260-m), 14-MW Haliade-X, built by GE Renewable Energy, and have a capacity of 3.6 GW after its completion in 2026, when it is expected to become the largest wind farm in the world and provide the UK with five percent of its total energy needs. 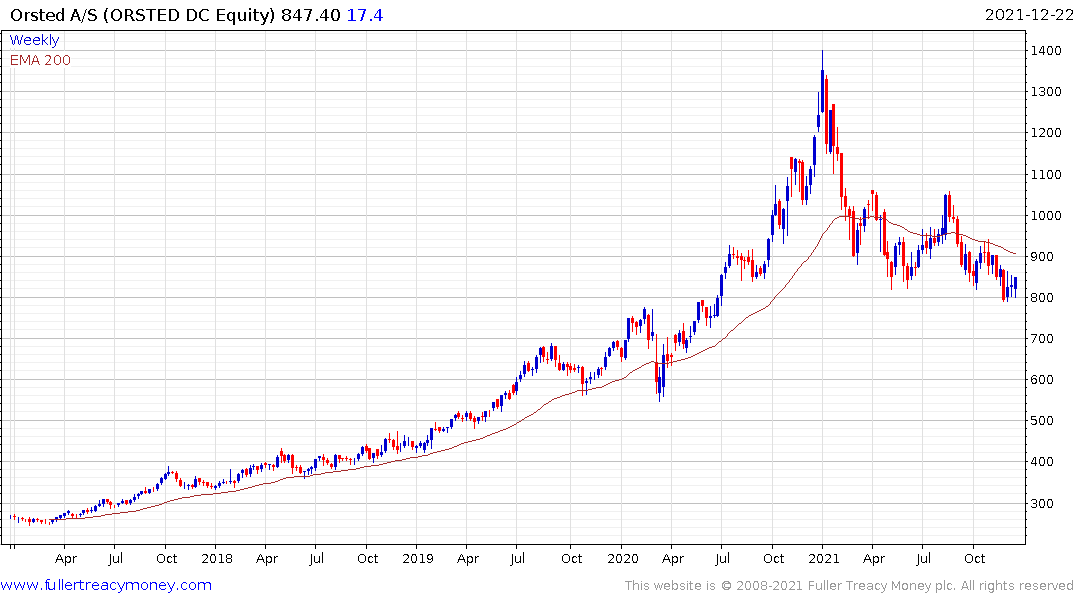 Denmark’s Orsted is building many of the UK’s turbines. The share is currently firming from the lower side of a six-month range. 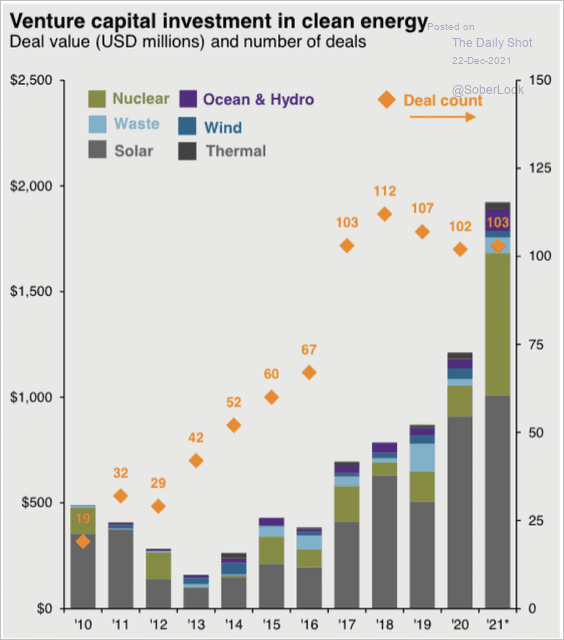 The innovation that has delivered offshore wind capacity, which is orders of magnitude larger than ever believed possible a decade ago, is truly impressive. It does not get around the fact that it only produces power when the wind is blowing. That implies the need for significant energy storage or backup power that can be brought online quickly. Small modular reactors are currently attracting a great deal of attention and Rolls Royce is one of the forerunners in the field. 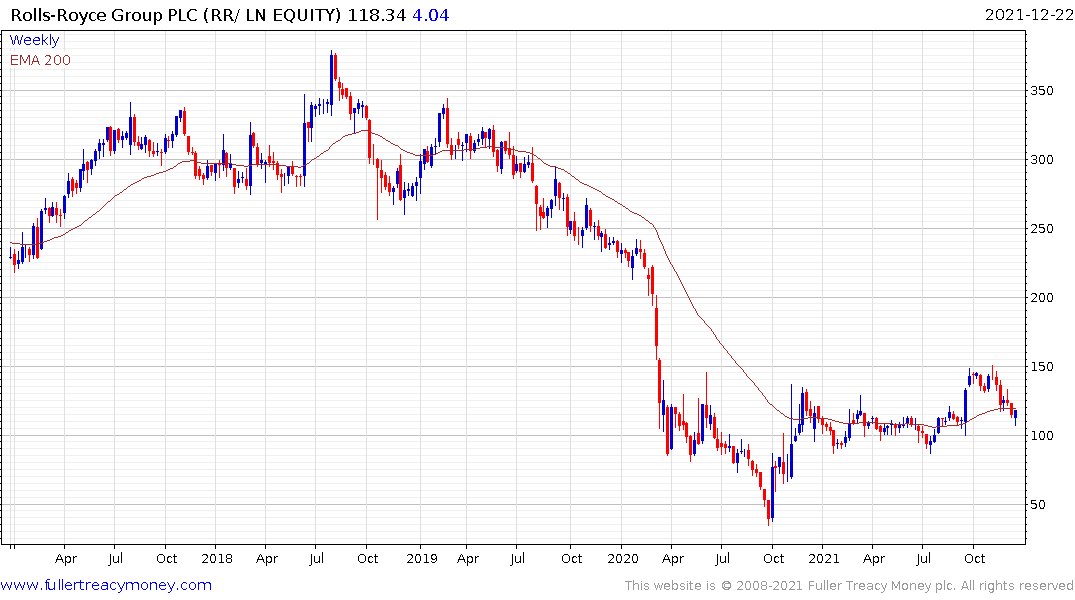 The share is currently firming from the 100p level. 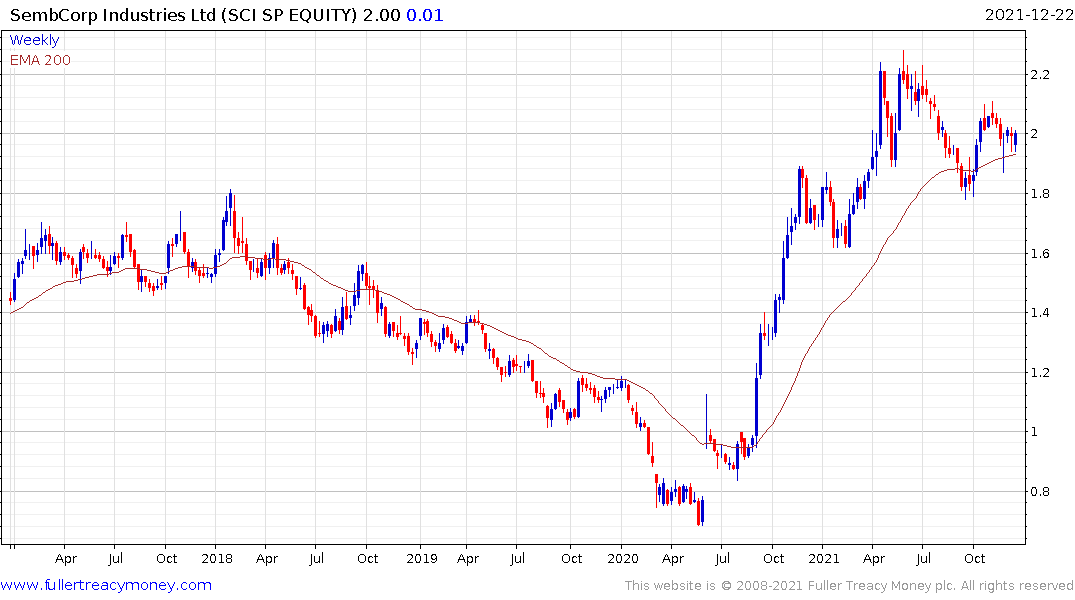 The alternative would be to overbuild generating capacity so batteries could be charged to when energy is most abundant. That’s a less robust solution but some mix of the two is likely. So far, building backup storage has lagged enthusiasm for building generating capacity. That suggests ample scope for catchup investment over the rest of the decade. Singapore’s Sembcorp Industries is currently building the UK’s largest utility-scale battery.