Hi David & Eoin, I wanted to get FTM thoughts and opinion on where the best investment returns could be had over the next 12 months and what would be the key things to watch for? Thanks for an excellent service

Thank you for your kind words and your question. This is a topic we cover almost daily in the written commentary and the audio but it is a good time to summarise our views.

Let’s ruminate for a moment though on the timing of your question. Generally speaking, the last six weeks of the year is given over to thinking about the possibility of a Santa Claus rally and people don’t generally look at the outlook for the next year until the last week of December or the first week of January. It made headlines during the week that Goldman Sachs had released its prognostication for the coming year, which may have prompted your email. However I believe it is worth considering that the stock market is a discounting mechanism and as a bull market progresses we tend to want to discount cash-flows from increasingly further into the future. It is a measure of how strong the market has been over the last month that investors are already planning for next year. Five consecutive weeks to the upside suggest some consolidation is increasingly likely.

Thinking about how market events will play out is a useful exercise provided it is grounded in the consistency of trends rather than fanciful estimates. At the beginning of 2014 no one was expecting Ebola to be a big story, that Russia would invade Ukraine or that Saudi Arabia would offer discounts on its oil. Rather than attempt to predict the unknowable we try to foster the humility to accept the market’s gyrations and act accordingly. 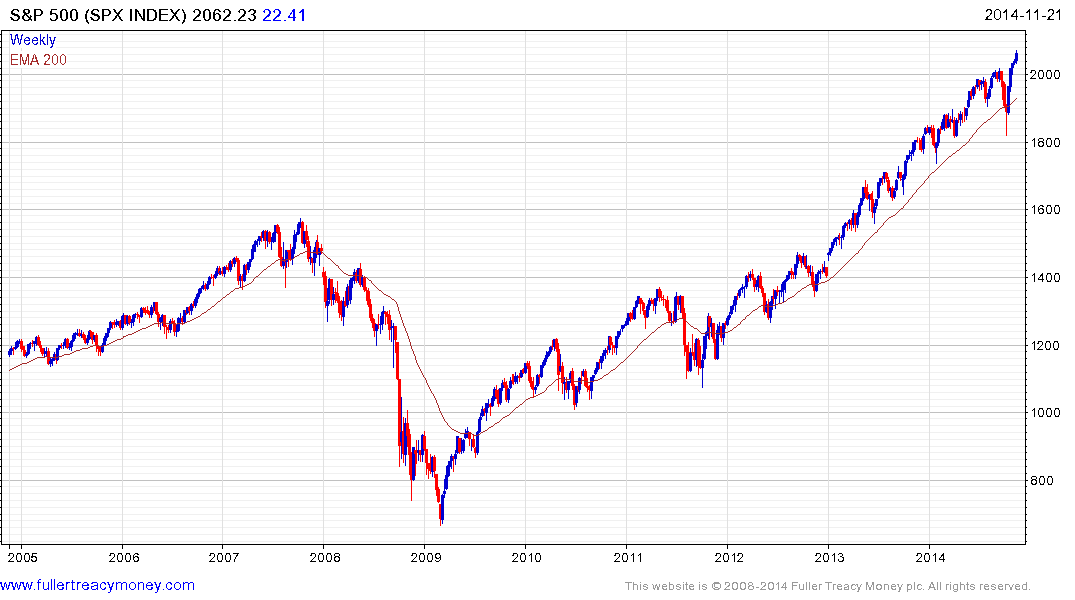 Wall Street (S&P500) experienced a shot across the bows in terms of its uptrend consistency in October by posting its largest pullback in three-years. This might be rationalised by thinking it occurred in the region of a big round number, 2000. For that view to remain credible, the 1900 level will need to hold on the next pullback for the medium-term uptrend to continue to be given the benefit of the doubt. 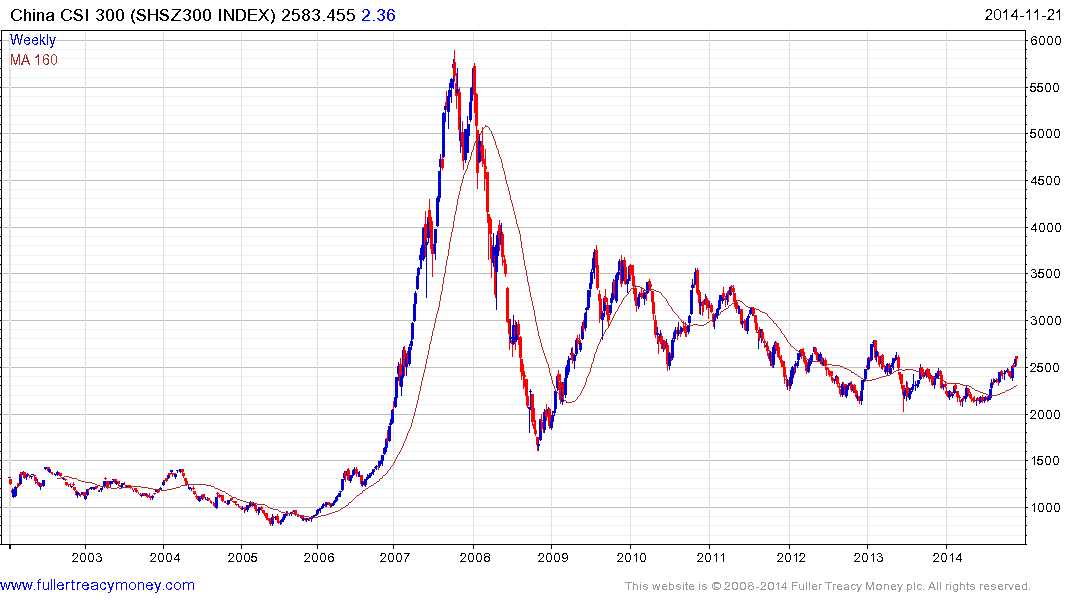 China cut interest rates today for the first time since 2012. Support for the property market was one of the primary reasons for this action. Looked at in the same vein, the opening up of the Shanghai – Hong Kong Stock Connect is an attempt to diversify exposure by encouraging foreign investors in while allowing some domestic capital to move abroad. In simple terms, if you diversify risk the asset price increases. China also has the potential to further loosen policy, cut reserve requirements and/or increase the quota for foreign ownership. Valuations remain some of the lowest in the world and medium-term downtrend has been broken. 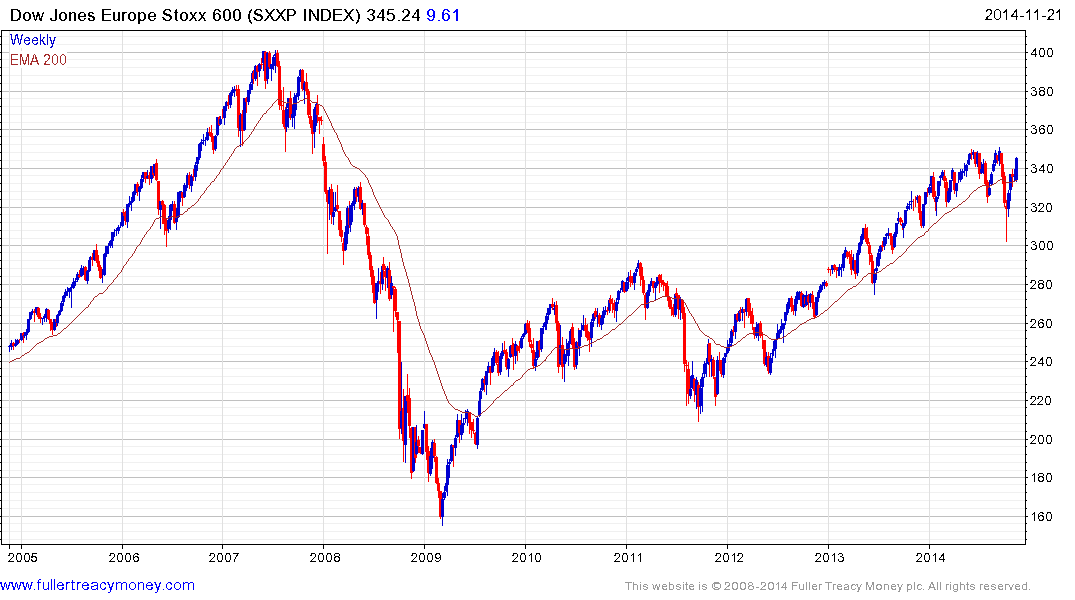 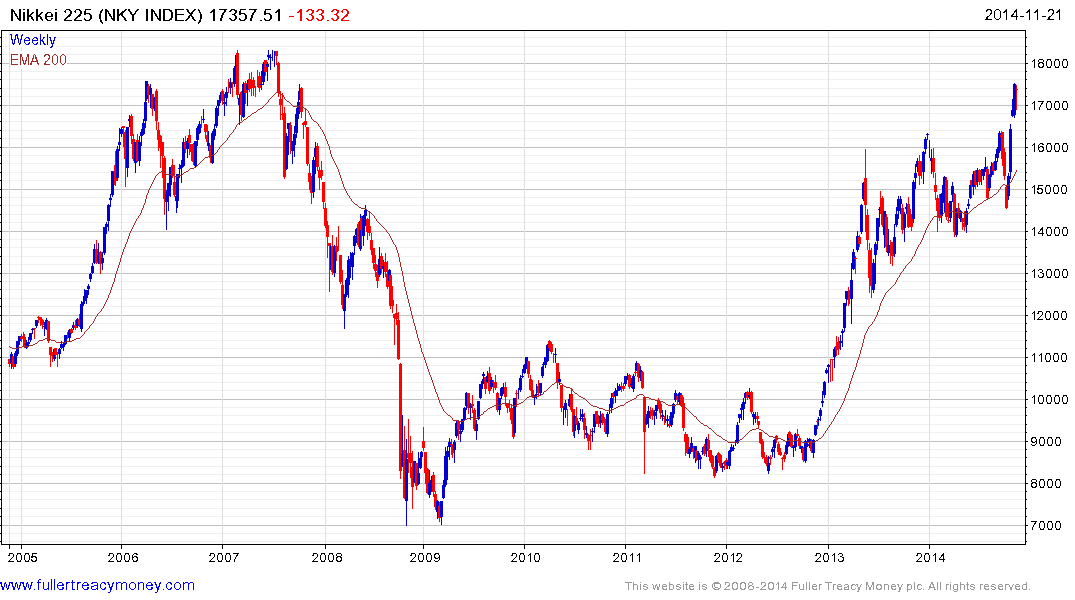 Regardless of the impetus, quantitative easing has been most successful in inflating the asset prices. As both Japan and Europe embark on ambitious easing programs, the potential for asset price inflation in both regions is quite favourable. In addition to India they are among the greatest beneficiaries of lower oil prices. There are a number of instruments available for hedging exposure to the Yen while gaining access to the Japanese stock market and it looks likely that the number of vehicles offering a similar service for Europe will also increase. 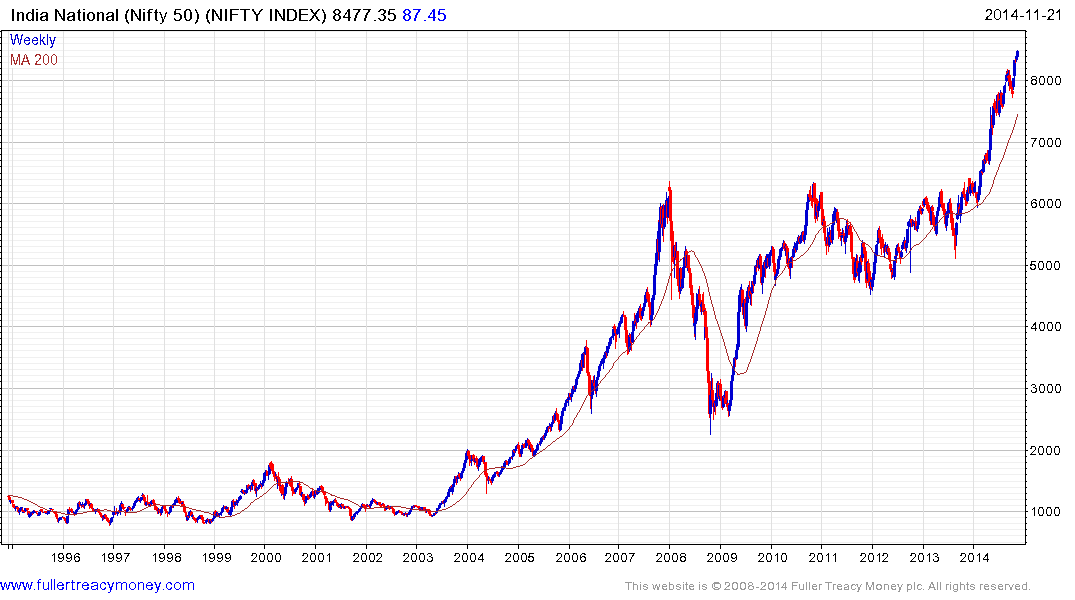 India has rocketed back from relative obscurity to become a darling of the investment community. The team of a capable central banker, Rajan, and a visionary leader, Modi, with an historic majority represents a powerful bullish combination. This is all the more important considering the depth of the malaise that preceded their appointments. The stock market’s performance remains impressive and there is no sign yet it has reached a medium-term peak. However, if interaction with India over the last decade has taught us anything, it is that the market is susceptible to occasional bouts of volatility which generally offer favourable entry points. 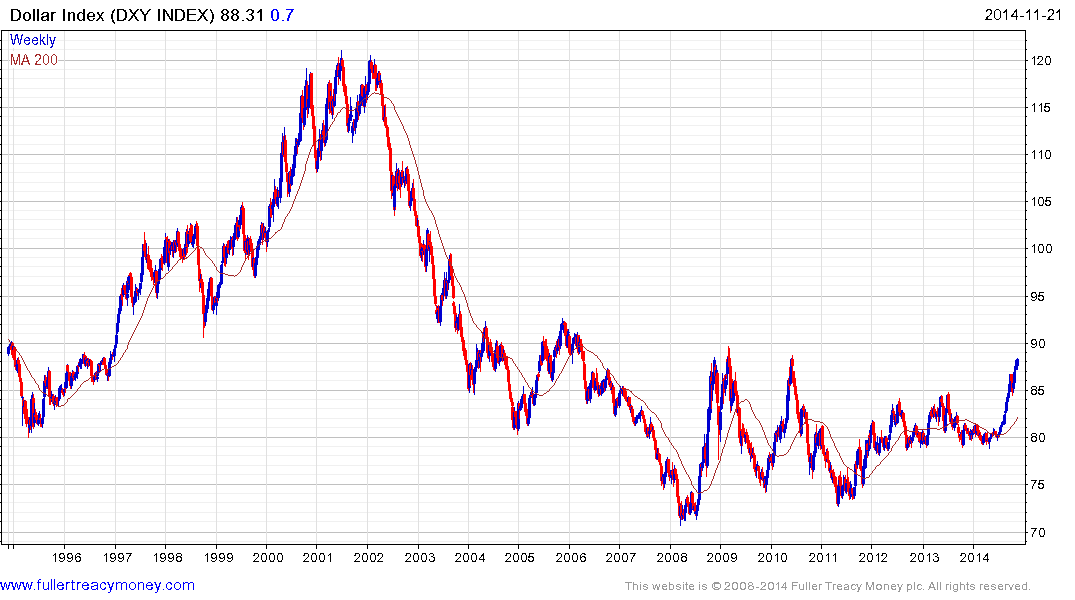 The Dollar is rallying from what has been a relatively depressed level and as a result currency market volatility is more of a factor now than it has been for quite some time. In my opinion, China has some of the best potential for additional upside because it is coming from such a low base. Wall Street’s returns should continue to benefit from a recovering economy, benign monetary environment and strong Dollar. Both Japan and Europe should do well in nominal terms. I like India a lot and it could be among the best performers in 2015 but finding a suitable entry point today is more difficult, such has been the pace of the advance. 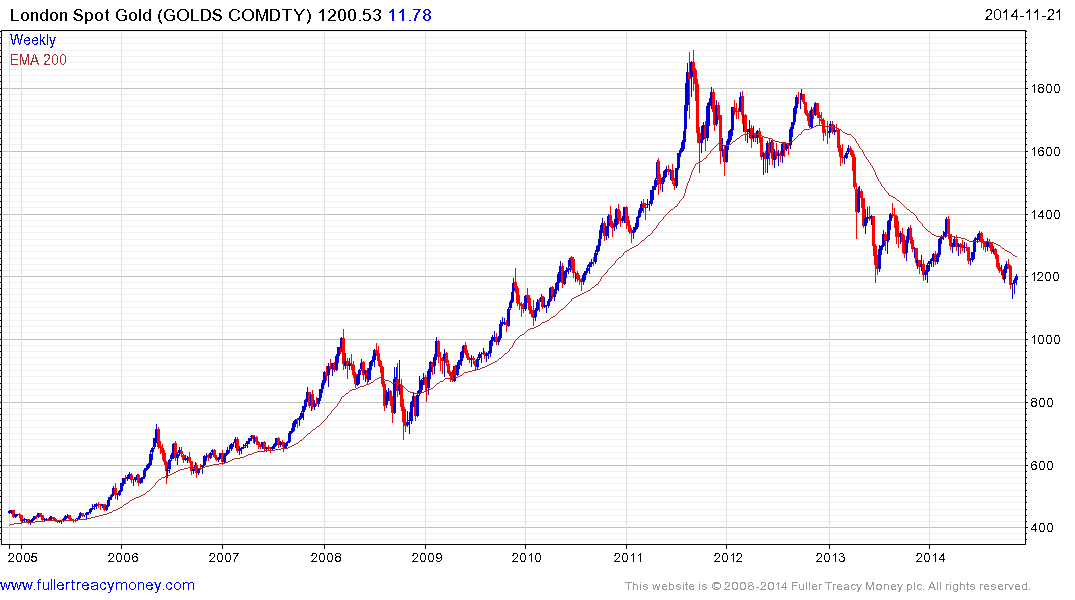 Gold is currently at an interesting level and is worth watching for further evidence of a downside failure. Since it has fallen out of favour it might be a contrarian’s favoured asset in 2015 subject to the chart action improving.