Email of the day on the green revolution by Eoin Treacy

Thanks for the great service pulling the noise out of market trends for us. We especially enjoy what my wife affectionately calls the “Big Picture Long-Winded” Friday recordings. Regarding the possible rotation into the renewable/green economy do you have any ideas on Industries/companies that could benefit from the build out? Or would the safer play be directly in the commodities needed for the grid, vehicles, batteries, and such? Hoping to get to another Chart Seminar before too long.

Thank you for your kind words. A former delegate at The Chart Seminar once described my sense of humour as “impish” and I can’t argue with that. Your better half’s turn of phrase certainly tickled me. The Friday broadcasts are often a delicate balance between trying to be pithy and attempting to cover the relevant arguments. I’m looking at a late May/early June date for a London seminar and I hope to see you there.

The question of the future of the zero carbon/green revolution/energy transition is a big one. On one hand we have high minded projections of a utopian future where the air is pristine and no economy is dependent on carbon emissions for growth. Promises of hundreds of trillions being spent to achieve that goal were a major feature of international conferences in 2021.

On the other hand, Rio Tinto just lost is lithium mining licence in Serbia. Chile put another lithium mine on hold earlier this week.  The Resolution copper mine in Arizona has been dragging on for 25 years and might never be built. The Biden administration cancelled another copper mining project in Minnesota this week.

NIMBY (Not In My Back Yard) local politics are trumping the desire to significantly increase supply at present. If that were the only trend in play it would increase the value of existing miners with permits already in place for production and expansion.

At the Future Minerals Summit in Riyadh the incompatibility of these two trends was one of the major points made by just about every mining company. The barriers to increasing mine supply are growing higher all the time. There is not enough supply to meet the ambitions of the new energy sector. 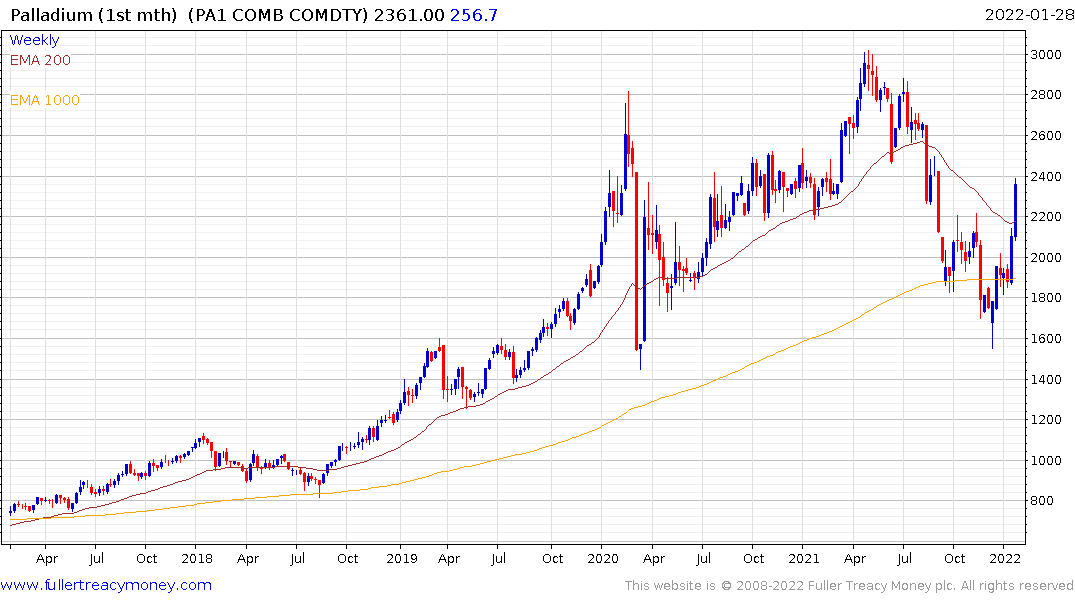 The fact that palladium has rebounded so emphatically over the last two weeks is a symptom of that realisation. Electric vehicle penetration cannot increase without a significant source of additional new supply of both chips and basic resources like lithium, nickel, and copper.

There is the additional wrinkle that promises of trillions being spent on new technology and infrastructure are dependent on governments ponying up the funds and companies having access to cheap abundant liquidity to invest.

This article from the Telegraph may also be of interest. Here is a section:

Chinese president Xi Jinping has said climate policies must not impact “normal people”, as he sought to reassure the public over the cost of its net zero drive.
In a speech to Communist leaders, Mr Xi signalled that China would prioritise jobs over the environment in the near-term, amid growing anxiety over an economic slowdown.

China was struck by widespread power outages which left homes, hospitals and schools in the dark last September, blamed on energy efficiency targets as well as the high price of coal.

Mr Xi said that the government’s plan to reach carbon neutrality by 2060 would not interfere with their daily lives.

This suggests that China is about to go slow on further decarbonisation efforts and not least because growth is slowing. That’s not great news for the forecasts of rapid decarbonisation that support valuations for hydrogen companies for example. It’s increasingly likely that the promises of a carbon free future are going to be paid lip service and the transition will be a lot slower than many expect. 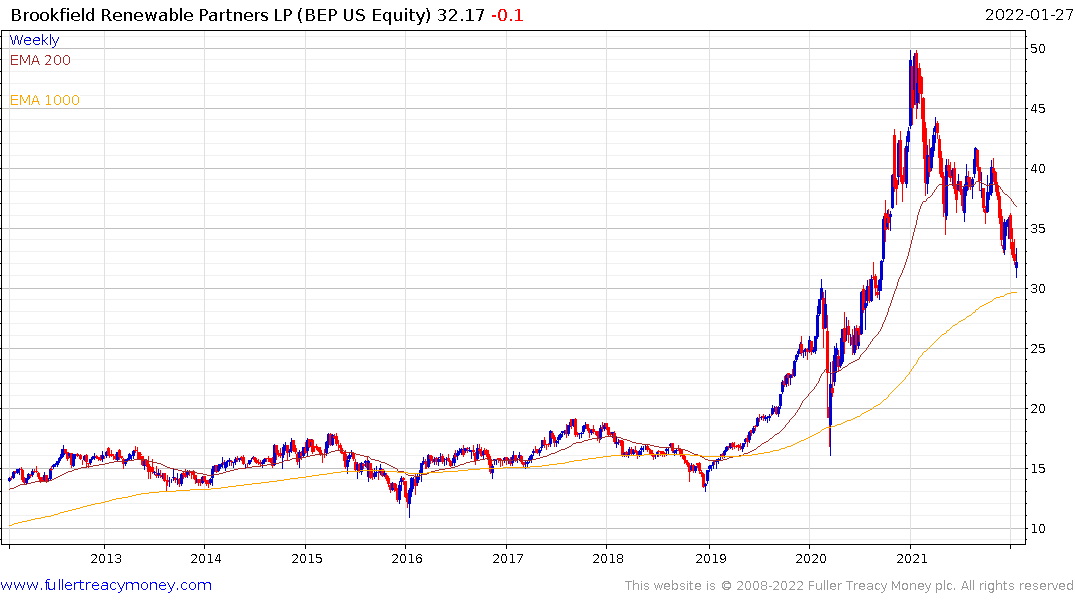 The jump in government bond yields has resulted in a deep correction for many related assets so it is a good time to think about potential opportunities. Brookfield Energy Partners acquired the Terraform power’s wind and solar assets at a deep discount beginning in 2017. The share has fallen 40% this year and is back testing the region of the 1000-day MA. It pays a dividend of 3.69% and is one of the best capitalised plays in the renewable energy sector. 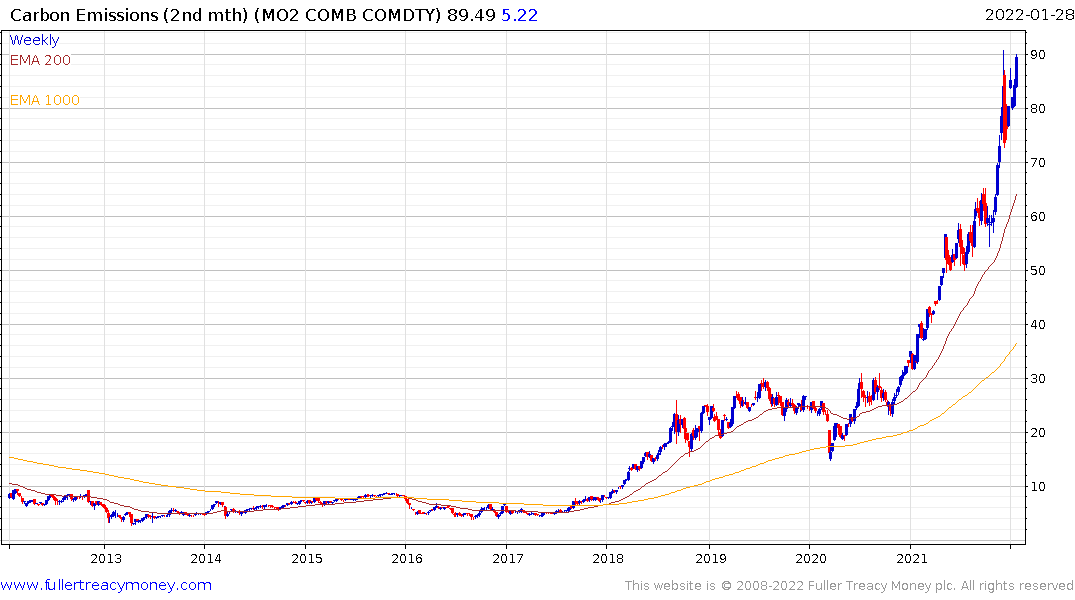 Carbon credits remain the primary tool being deployed by governments force change on industry. The KraneShares Global Carbon Strategy ETF remains in a consistent uptrend. The appeal of carbon credits is they are government sponsored. 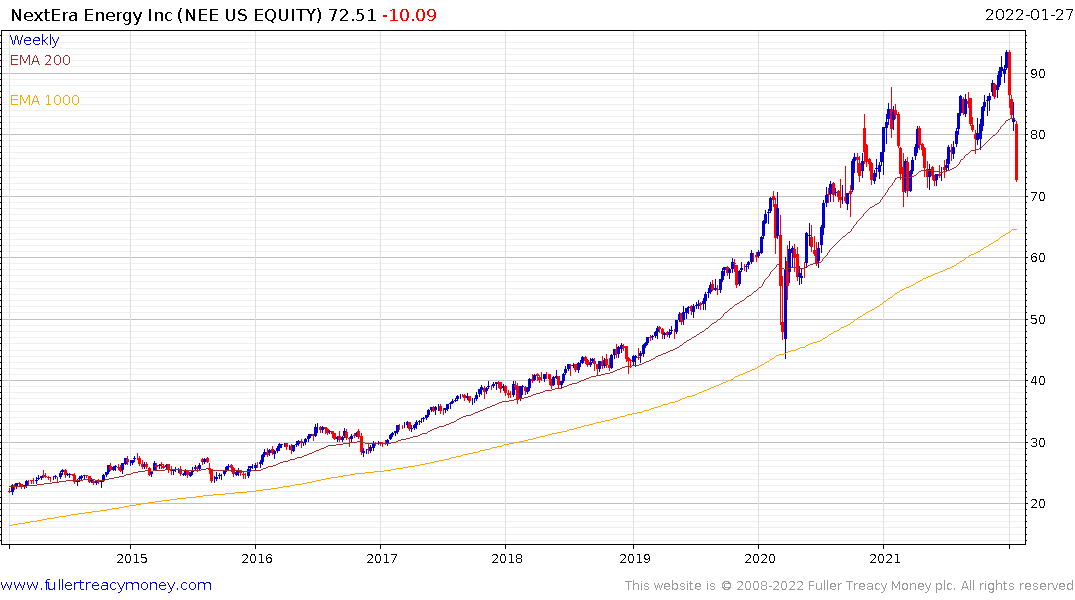 NextEra Energy is accelerating lower despite strong earnings this week. It’s the largest cap US utility and focuses on renewables but it is being punished for running thin margins as it grows its footprint. The yield has now jumped back above 2% this week.

If the world is going slow on the energy transition that’s positive for fossil fuels because it is still not politically expedient to invest in increasing supply. The end of contract spike in national gas prices yesterday was an additional symptom of how illiquid the market has become. 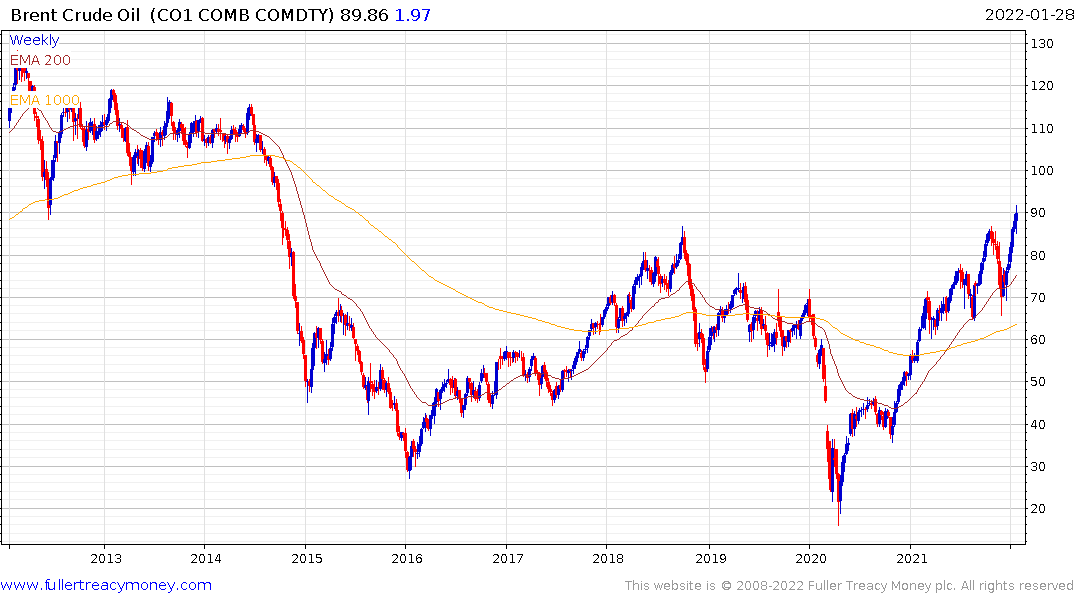 Crude oil is trending higher and broke out to new eight-year highs this week. 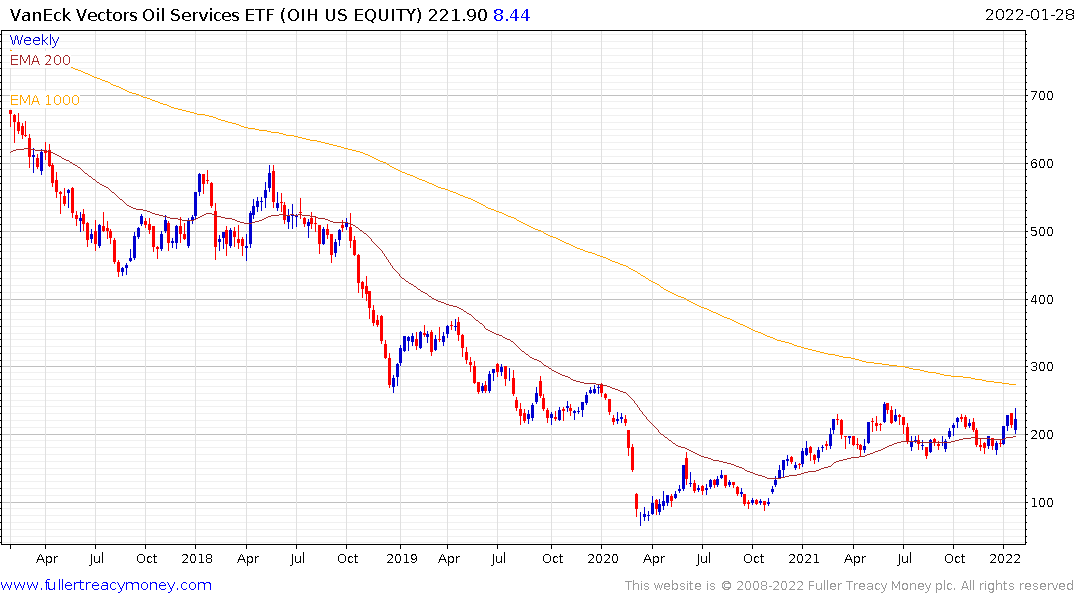 The VanEck Oil Services ETF is testing the upper side of its range. 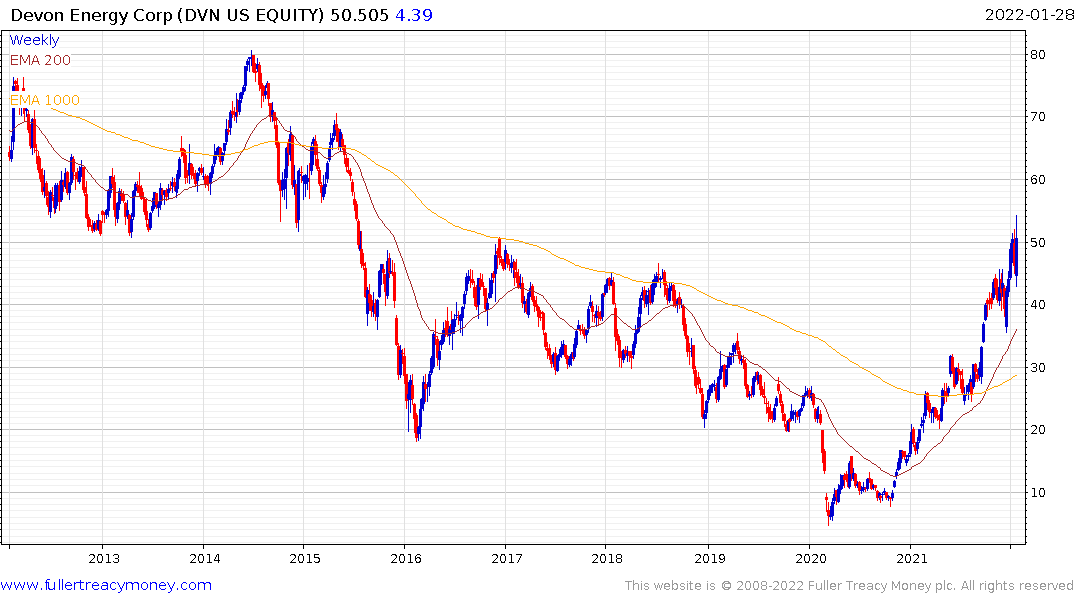 Devon Energy continues to lead on the upside. 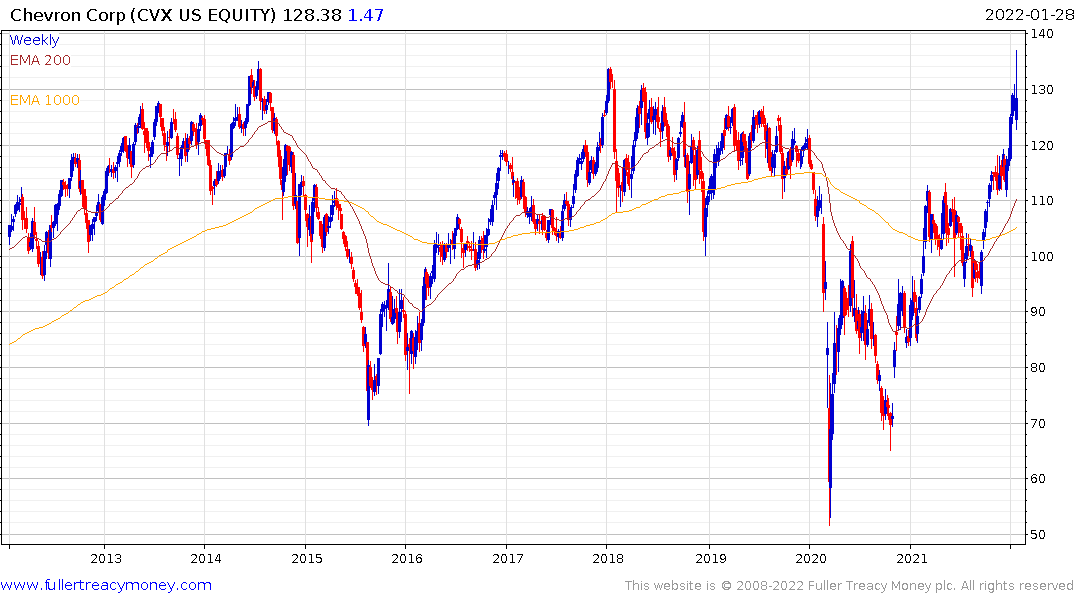 Chevron is consolidating in the region of the all-time peaks.

These trends suggest the dream of an energy transition is running into realpolitik. The sector needs a bullish catalyst in the form of lower interest rates, abundant new credit and/or clear sponsorship from governments to drive a recovery. At present focusing on reliable cashflows is more likely to bear fruit.