Email of the day on Tesla
Comment of the Day

Email of the day on Tesla by Eoin Treacy

My hunch - but I may be wrong - is that electric cars are relatively easy to build... there is not much technology in an electric engine, no complexity; as for the batteries (which I understand are Panasonic's in the case of Tesla, which assembles them together in very large modules) I understand that the know how is not really in the hands of Tesla or any other producer (even Renault/Nissan stopped developing in house technology) and therefore someone else did the clever job.

As a first mover Tesla has very competently built a good product, taking risk only where strictly necessary: luxury brand (low risk) with traditional, long bonnet, probably off the shelf design (low risk), an old chassis for the roadster, well tested batteries. Also, the complexity of electric power train - compared even with a small 1ltr engine - is little: there are fewer (almost none in fact) moving parts, no gear box. No way a new producer could enter the industry with its own internal combustion engines, but the electric car gives this opportunity.  A good demonstration of this is that Tesla's provisions for warranties are in line with those of a mature manufacturer with a well-tested line up of cars... probably Tesla know that there is so little in an electric car that can actually go wrong.

Traditional producers have held off from making a proper move into the sector not to cannibalize their current products and make all R&D and Capex in a probably obsolete technology completely worthless. After all they can catch up quickly: the difference between a Tesla, and a BMW or Nissan Leaf or 500e is purely the size of the battery, whose development risk is not theirs... On paper, a Leaf may have the range of a Tesla simply by doubling the size of the battery. In the meanwhile, no necessity of taking the risk of killing their current baroque business model, made of V12, V6, boxer, in line 4 or 3 or 2 cylinder hyper complex engines that you have to service all the time and last 300k when of exceptional quality.

Traditional car manufacturers will "tolerate" Tesla as far as it does not build a too strong brand (ludicrous speed is genius by the way: intrinsic of electric engine, easy to do, but presented as cool high tech stuff), then move in and with their economies of scale and less vertically integrated structure quickly catch up... it will be dear, but unavoidable as Tesla made clear it is possible to achieve a usable and fun product with no petrol engine.? VW making its move,? but I guess everyone if working on something.

What I think could get ugly in this story - from the point of view of Tesla shareholders - is the excessive use of dodgy accounting (there are examples), the glorification of the CEO and its ideas (never good in a plc), just to get hold of capital for a venture that is extraordinarily risky and liable to competitive pressures from corporations much larger and much more sophisticated. How far will the individual Musk go to keep the business going? He is very successful, people love him, Tesla S has been voted best car ever. Difficult to give that up, right?

Did not look at the other businesses of his, with Space X he is against defence and/or state run companies... difficult.

Anyway, just a thought, I may be completely wrong..

Thank you for this detailed email and I agree that with valuations as they currently stand Tesla does not have a great deal of margin for error. The company has lost money in every quarter since 2013 but less than analysts estimated which has helped support the massive run-up in prices.

As I said at the time, building a “gigafactory” is expensive and this loss of momentum and lengthy range on the share price is not wholly unexpected. A sustained move below $200 would be required to suggest a turn to supply dominance. 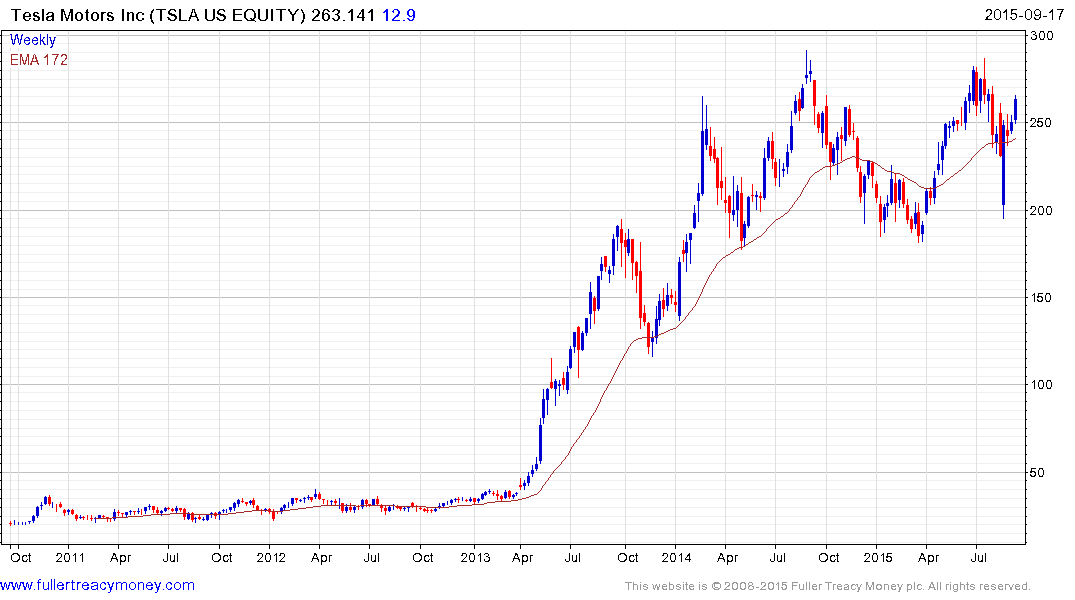 While the company’s cars tend to gain the majority of headlines, its home battery solution is potentially much more important. Economists often talk about the role of lower gasoline prices in promoting consumer spending but the ability of consumers to eliminate fuel spend and to reduce their utility bills is less remarked upon probably because they do not yet have data to base it on. 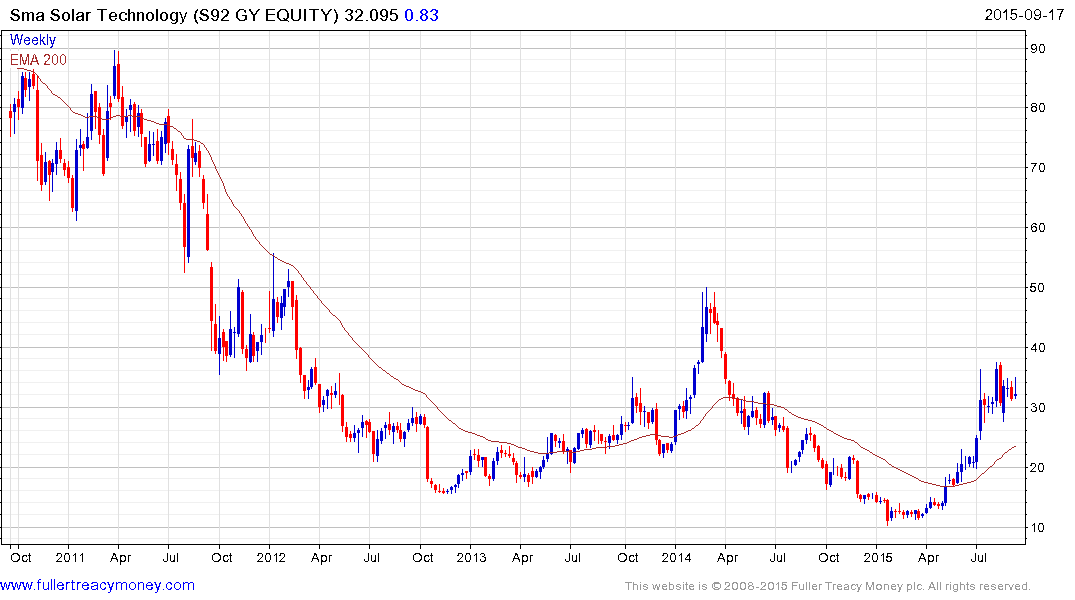 German listed Sma Solar Technology, which also had a home battery solution, has been consolidating its earlier advance and a sustained move below the trend mean would be required to question medium-term scope for additional upside.