I'm looking for your view again on the Canadian energy sector.  I obviously am aware of the effect technology has had on the shale boom etc...I do disagree with most assertions that there is a flood of supply in oil at these price levels.  Anyway, aside from that- how do we go into this massive global GDP growth phase and not require an abundance of resources of all kinds?  Technology has brought on supply but they require much higher prices to break even.  Help me reconcile how we have this huge growth backdrop and yet the market is pricing in disaster levels in Canada?  Is the energy sector forever dead or is this a tremendous buying opportunity?   Thanks as always. Hope you and your family are well.

Thank you for a question sure to be of interest to the Collective. My family are all in rude health thank you. The oil sector has a lot of moving parts so let’s try to pick it apart.

Saudi Arabia is pumping oil like it is going out of fashion and in a sense it is. The evolution of solar in particular, but also other renewables, batteries, electric cars, hydrogen fuel cells and the migration of work onto the cloud mean that oil now has challengers both as a transport fuel and for heating. 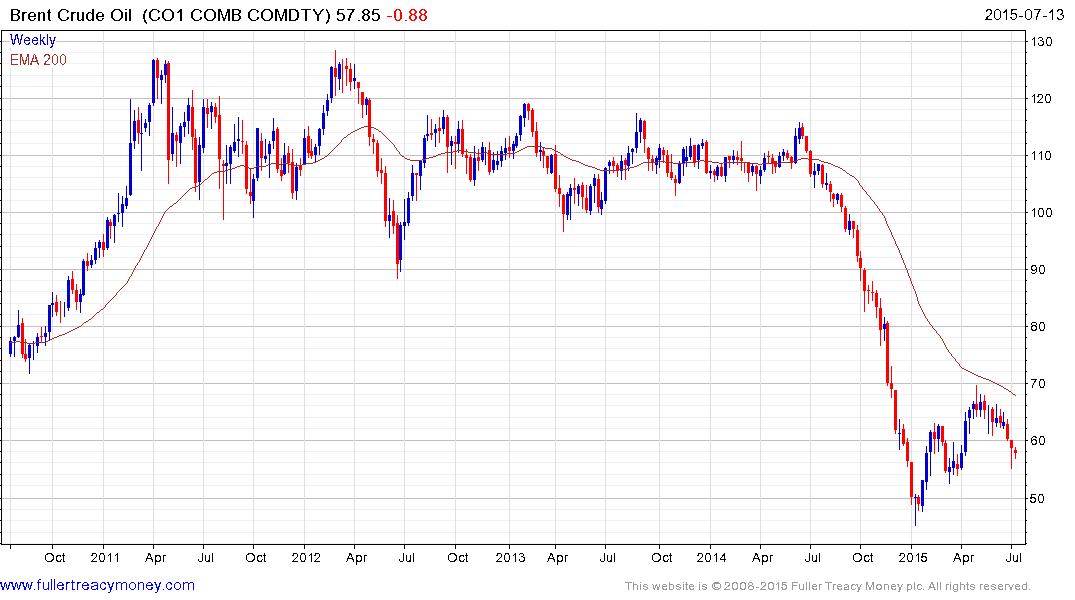 More broadly hundreds of billions of Dollars have been spent on increasing supply and this is now reaching market. The breakdown from the 4-year $90 - $130 range on Brent represented the pricing in of this transition while the low near $45 represents a nadir of at least near-term and potentially medium-term significance.

I agree that a period of synchronised global economic expansion would require more resources of every type but does that mean prices have to rise? The commodity bull market was predicated on supply inelasticity.  In any market, price reflects the marginal supplier. Unconventional oil and gas is the marginal supplier in this market because they are unprofitable at a comparatively high price relative to more established operations.

Fracking and refracking represent potentially important changes to how supply is managed.  The early decline profile of unconventional wells and their apparent positive response to refracking means companies with the technological knowhow may have the potential in future to cater supply to price changes. It’s still very early but if correct this would represent a good argument for prolonged ranging. This also suggests that supply inelasticity is less likely to be a factor when global economic growth eventually picks up. 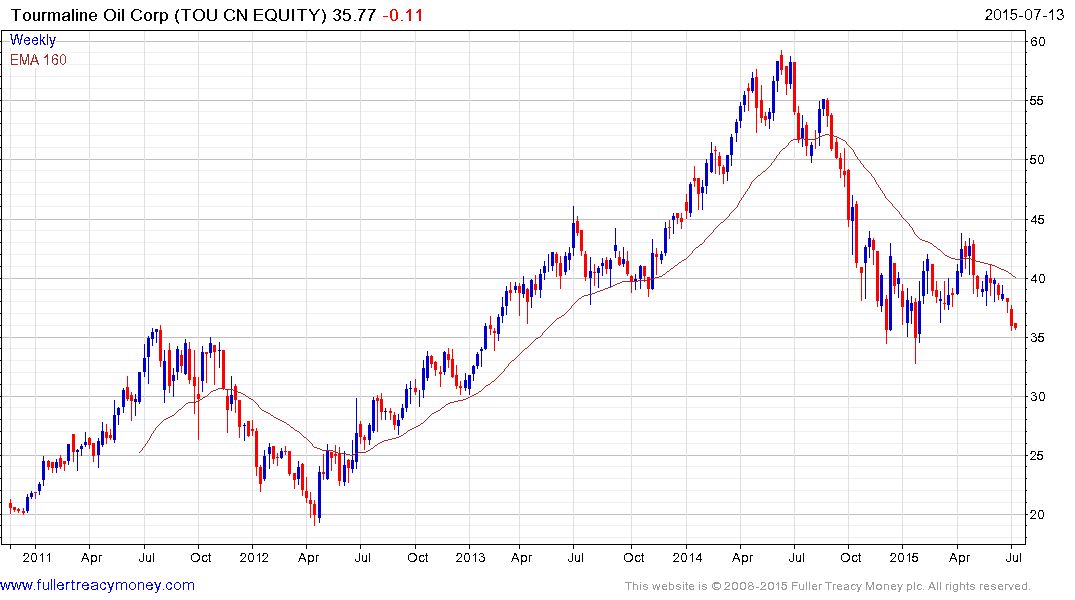 Tourmaline Oil Corp is a mid-tier Alberta producer which outperformed in robust fashion until a year ago when it dropped to break below the trend mean. It encountered resistance in the region of the MA from April and has dropped to test the lows near C$35. A clear upward dynamic will be required to confirm a return to demand dominance in this area. 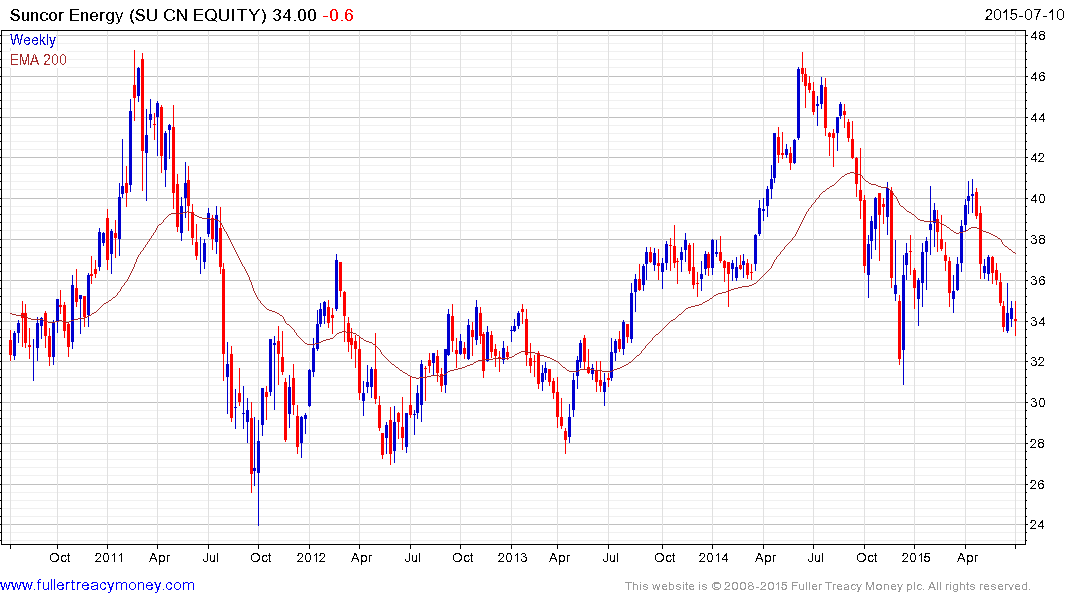 As an integrated company Suncor Energy (DY 3.26%) has been relatively inert for much of the last five years, ranging mostly between C$30 and C$45. It is currently steady in the region of C$34 and a sustained move above C$35 would begin to suggest room for some additional upside. 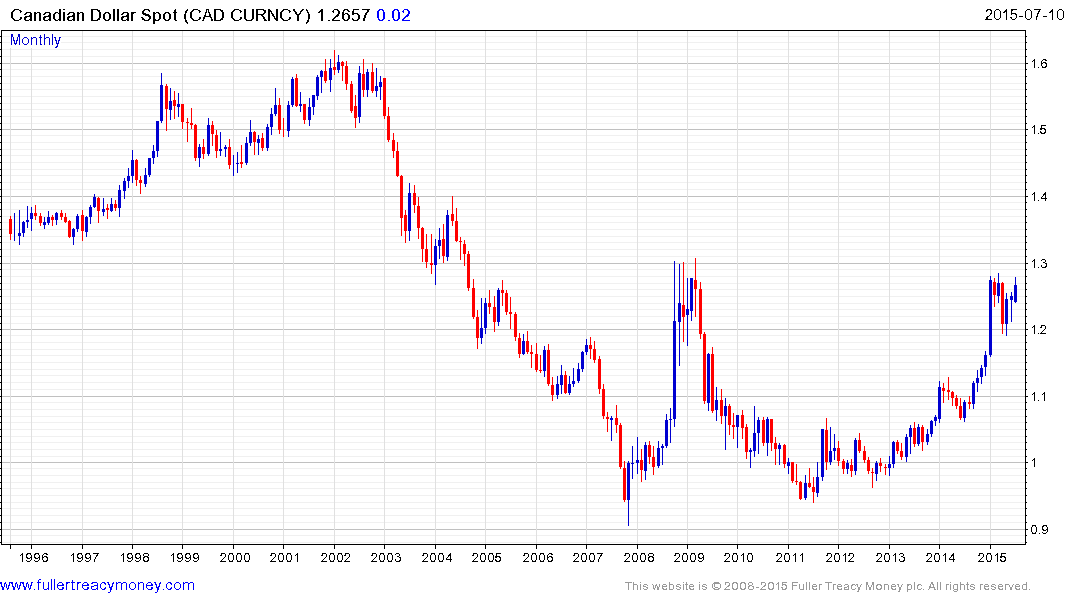 Nevertheless it is an inconsistent pattern overall and suitable only for an active (and lucky) trader.
Neither company has an attractive chart pattern but they may get some assistance from the Loonie. The US Dollar is back testing its 2008 peak against the Canadian Dollar and while there is room for some consolidation in the C$1.27 area, a sustained move below C$1.22 would be required to begin to question greenback dominance. 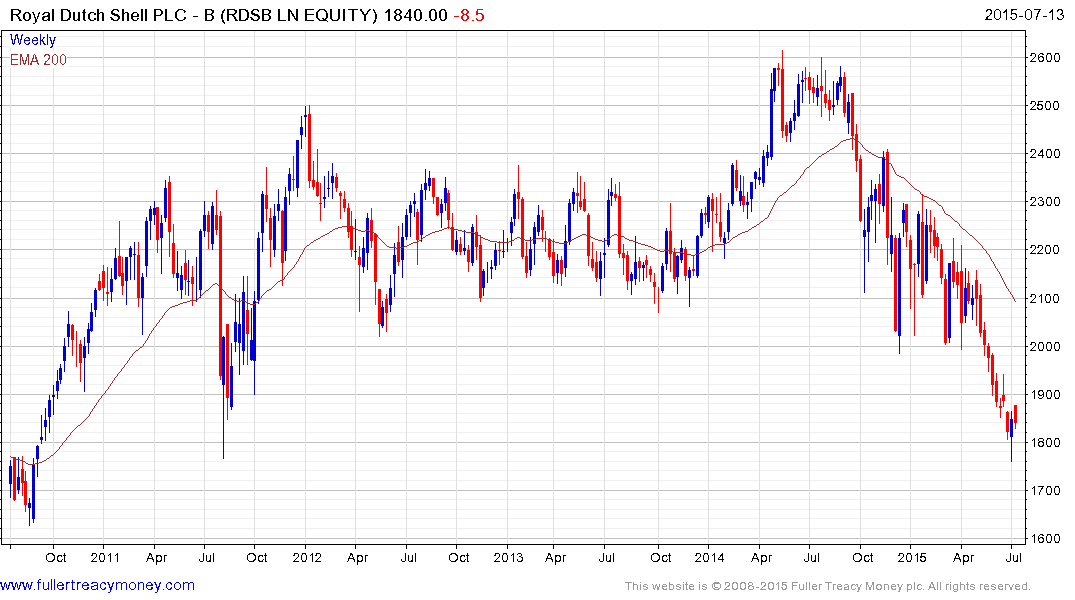 I think it’s important to highlight that there is value in oil shares. For example Royal Dutch Shell is AA rated and its 2025 bonds yield 3.4%, meanwhile its equities yield 6.62% which reflects just how much bad news has already been priced in. The share found at least short-term support in the region of 1800p last week and potential for a reversionary rally back up towards the MA is looking more likely. It will need to exhibit support coming in at progressively higher levels to indicate demand is returning to dominance beyond the short term. 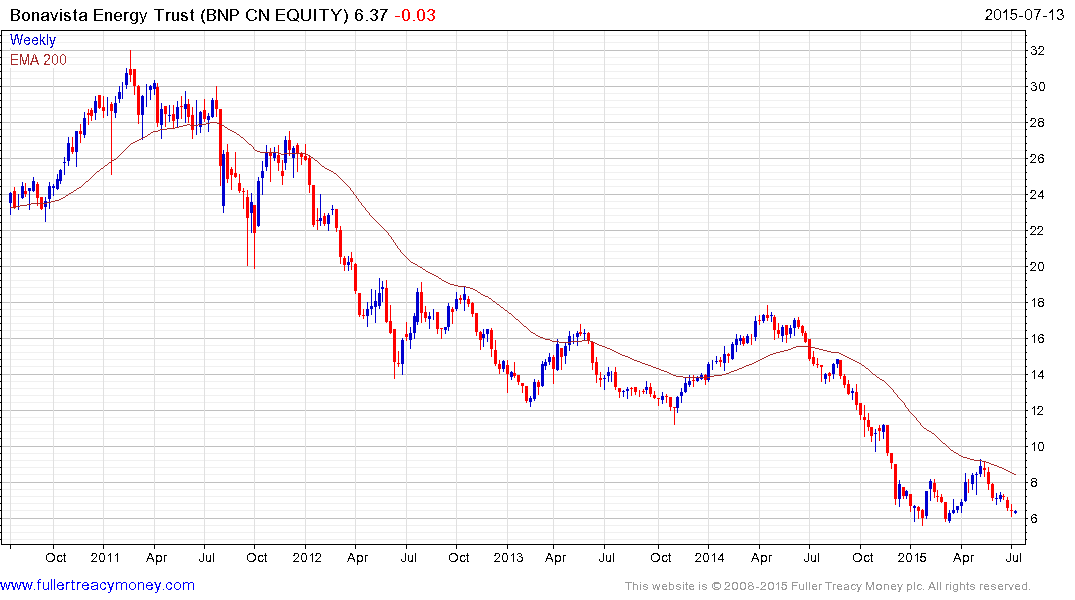 Canada’s Bonavista Energy Corp yields 6.57% and has been cutting the dividend by approximately 20% a year. The share is now testing its lows near C$6 but will need to hold that level if support building is to be given the benefit of the doubt. 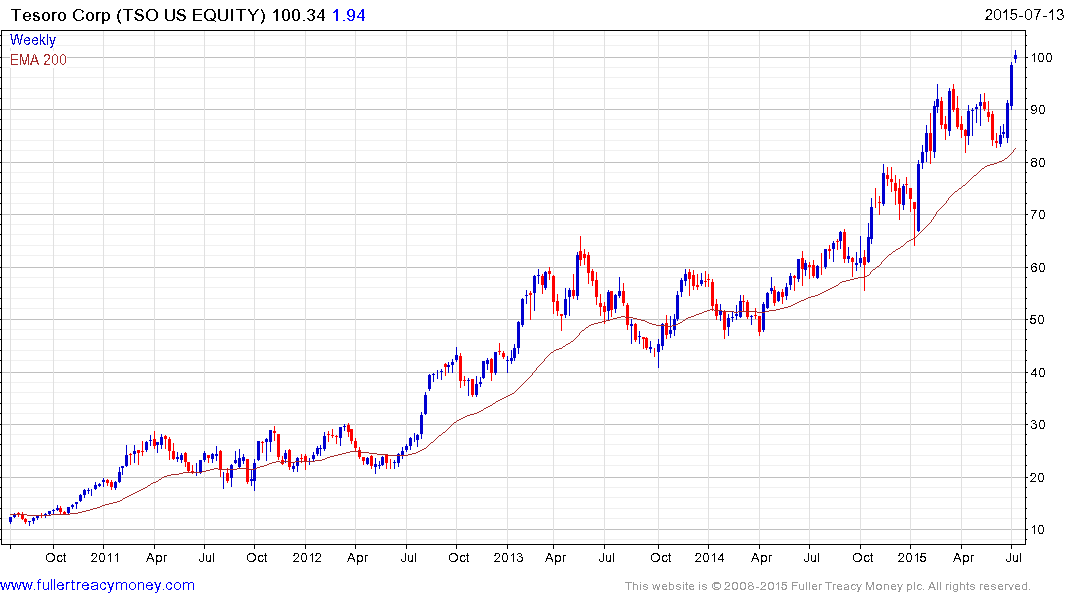 Elsewhere Tesoro’s crack spread is benefitting from low oil prices as refiners turn to outperformance. The share broke out of its short-term range last week to reassert medium-term demand dominance. 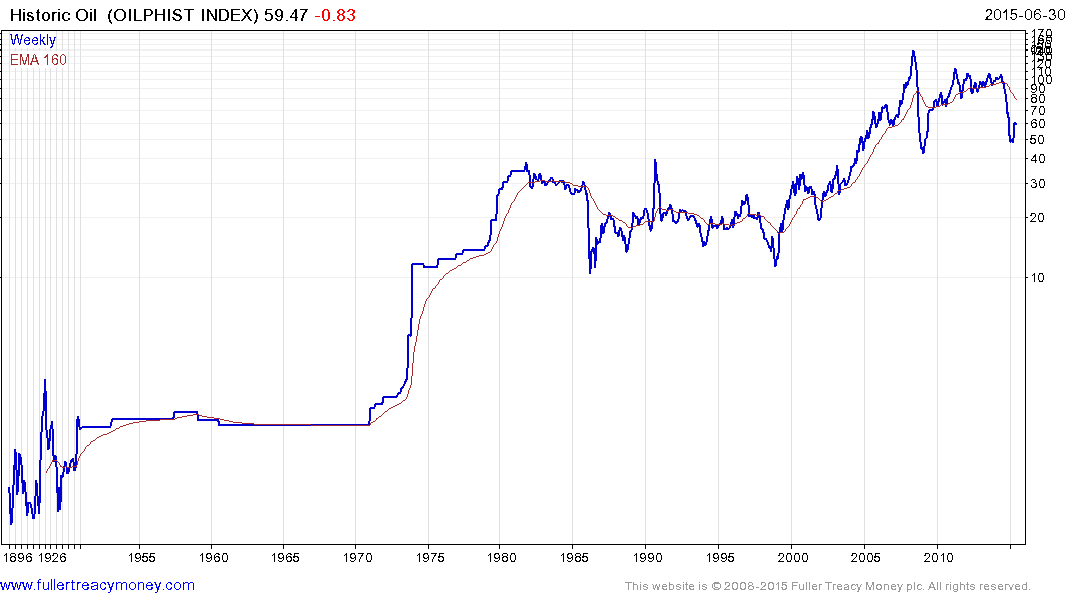 Long-term this log scale chart of oil prices is instructive. Major bull markets have been followed by lengthy ranging phases and we may now be in another long congestion area.