Email of the day on inconsistency in medium-term trends.
Comment of the Day

Email of the day on inconsistency in medium-term trends. by Eoin Treacy

Eoin - appreciate your use of both the P&F and weekly chart against the moving average in your discussion of Microsoft.  When evaluating the consistency pattern of stocks (Microsoft and others), how do you "adjust" for circumstances such as COVID 19?  Clearly, Microsoft was negatively impacted like many other equities in the COVID induced meltdown, but has also rebounded more smartly than others.  Thanks, as always, for your insight and willingness to share same.

Thank you for this question which gets to the heart of a question I think most people are thinking at present. There are three important considerations when looking at market reaction. These are: where are we in the secular trend? Is liquidity expanding or contracting? What does the chart tell us about sentiment?

The secular bull market that became obvious on Wall Street in 2012 is being driven by technological innovation and liquidity.

Technological innovation remains a significant growth driver. Cloud computing has been a saviour for many businesses during lockdowns but it is the cost savings over maintaining onsite architecture that will make it sticky. Meanwhile the roll out of 5G will greatly enhance the availability of services via mobile devices.

In the energy sector, there is a clear need to build additional electricity generating capacity. The evolution of industrial scale batteries is currently the missing link in developing a lot more renewable sources of energy in the absence of additional nuclear facilities. It is quite likely infrastructure development on an epic scale will result from the stimulative measures deployed following lockdowns. The continued outperformance of renewables and especially hydrogen stocks, relative to oil, suggests investors are already betting on this outcome.

The evolution of deep learnings, artificial intelligence, automation and 3-D printing all represent trends that are going to be amplified over the coming years. The promise of autonomous vehicles is only a promise today but when eventually delivered it will represent a further iteration of the dehumanisation of the economy.

That’s the internal contradiction of the technology. The trend of innovation is towards dematerialisation when physical products and locations are replaced by virtual applications. Books, music, entertainment and retail all now exist on the internet. The trend is towards dematerialisation of banks, lawyers, doctors and all their administrative staff move routine visits online. This in turn creates a trend of dehumanisation where people are removed from the supply chain.

The challenge therefore is if consumers see fewer opportunities to increase their income and work is further delineated between the highly educated and the less well educated, where is the money to support all the new services going to come from?

This is a classic example of Hegel’s master-slave dialectic. Technology companies are now the biggest in the world, dominate the global economy and prosper by removing the need for workers. Ultimately, they depend on workers to be able pay for their services. The secular trend will probably end when the tide turns.

Liquidity stagnated between the end of 2017 and Q3 2019 which contributed to a loss of momentum on Wall Street. The ramping up of liquidity is a net positive for asset prices and there is a strong correlation between new monetary infusions and stock market rallies. The opposite is also true. The tide of liquidity remains upwards and the only thing that has any chance of derailing it is inflation.

Low energy prices put a significant dent in the potential for commodity inflation. Wage demand growth has probably been boosted by the overly generous unemployment benefits where people earn more from doing nothing than working. Deglobalisation and the increasing awareness of China’s clear intention to dominate the global economy is probably the biggest potential source of inflation.

All three of these topics needs to be monitored because they are the clearest threats to the continued supply of liquidity.

Everyone is asking whether the massive reaction against the prevailing trend is meaningful or should be ignored because it is exogenous event? The very fact we have to ask the question tells us it has had an impact on sentiment. That suggests we have in all likelihood seen a medium-term top.

Microsoft has benefitted enormously from the adoption of subscription business model and its pivot to cloud services. That has allowed it to rebound impressively but where is the next source of growth going to come from when the economy is already in recession?

Contrast these two charts. The first of Disney, then of Microsoft. 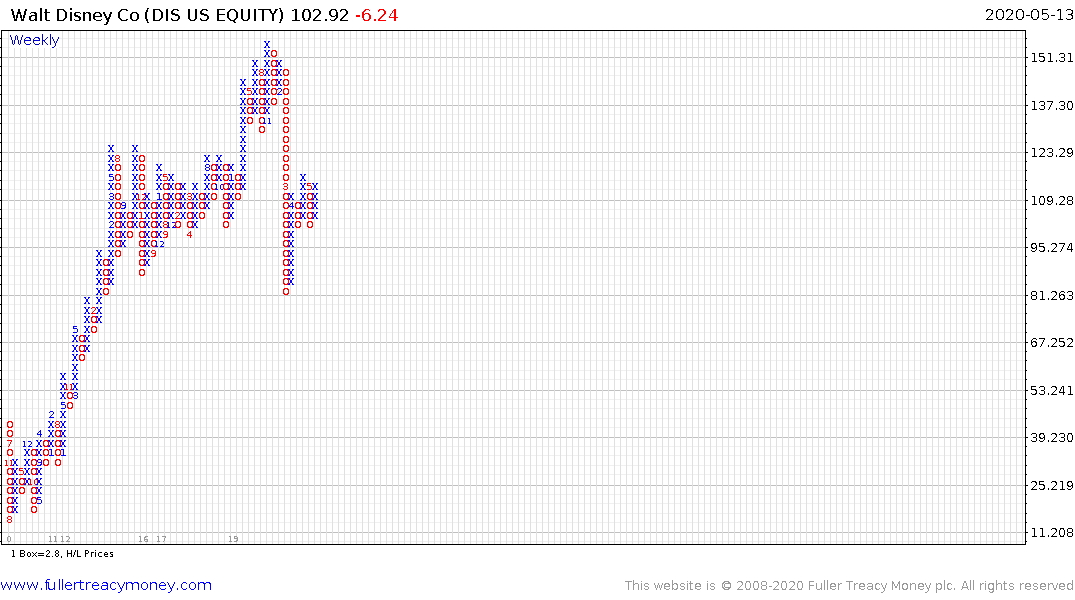 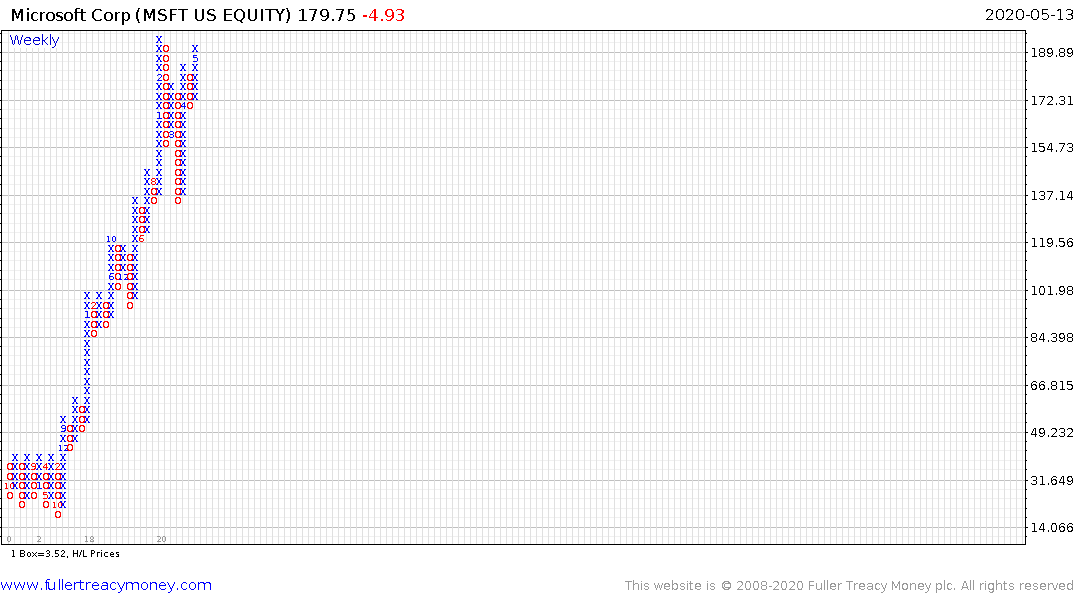 It is not at all unusual for stocks to form prolonged ranges following major trend inconsistencies, provided they are still in a long-term uptrend. Secular bull markets are punctuated by recessions. The risk/reward of betting on Microsoft to repeat its rebound from current levels looks very unfavourable right now.