Email of the day on European solar ETFs by Eoin Treacy

Hello, I was wondering if you could analyse the solar power sector, in Europe there are no funds or ETFs to invest in this sector. In the US I found the Guggenheim Solar ETF. I notice that this ETF is very correlated with the heaviest weighted stock, First solar, so I will probably buy this as being in Europe we are fiscally punished if we buy us ETFs which are not compliant with UCITS regulations. Anyway First Solar seems to have a very interesting chart could you please comment thanks

Thank you for this question and following a search on Bloomberg I did not find a dedicated solar fund listed in Europe. I’ve reviewed solar companies on a number of occasions over the last year not least because they were rallying from deeply depressed levels and because the technological advances seen in the sector hold out the potential for a truly game changing innovation in the energy sector globally. Here is a link to the Tag for solar comments. 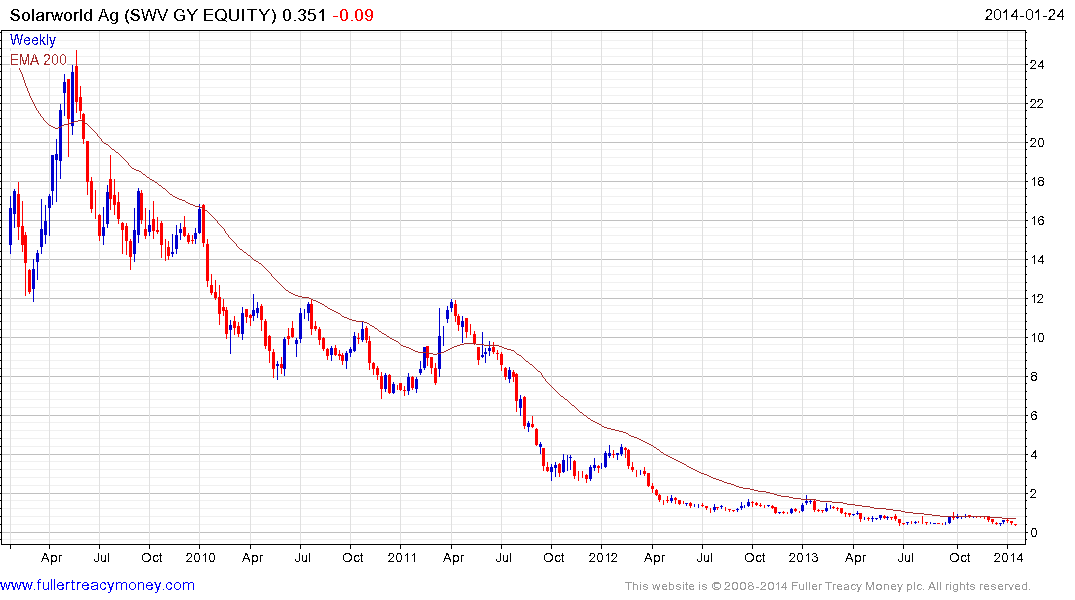 Within Europe, Germany listed Solarworld has not participated in the solar revival and has fallen to such an extent that it is probably either going to be taken over or go bust. 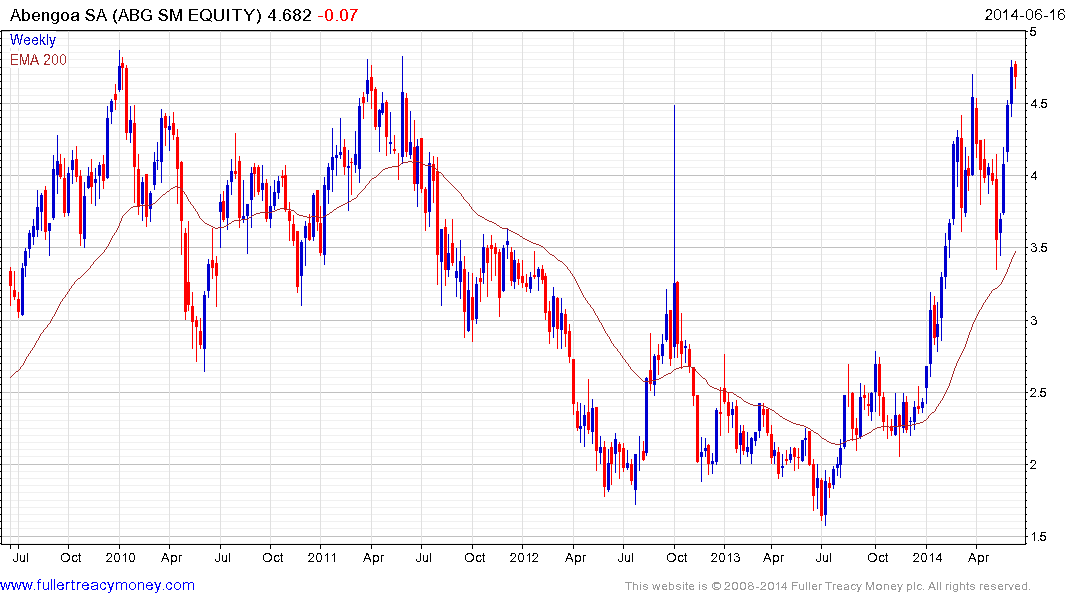 Spain’s Abengoa is an altogether different story. The share retested its 2008 lows last year but failed to hold the downward break and has rallied to retest the 2010 and 2011 peaks this year. While some consolidation of recent powerful gains appears likely, a sustained move below €350 would be required to question medium-term recovery potential.

Within the US solar market, one has a choice between companies manufacturing solar panels and those installing panels in consumer’s properties in return for future utility-like cash flows.

First Solar is a leading manufacturer of thin film solar panels and continues to hold a progression of higher reaction lows; finding support in the region of the 200-day MA on reversions. . 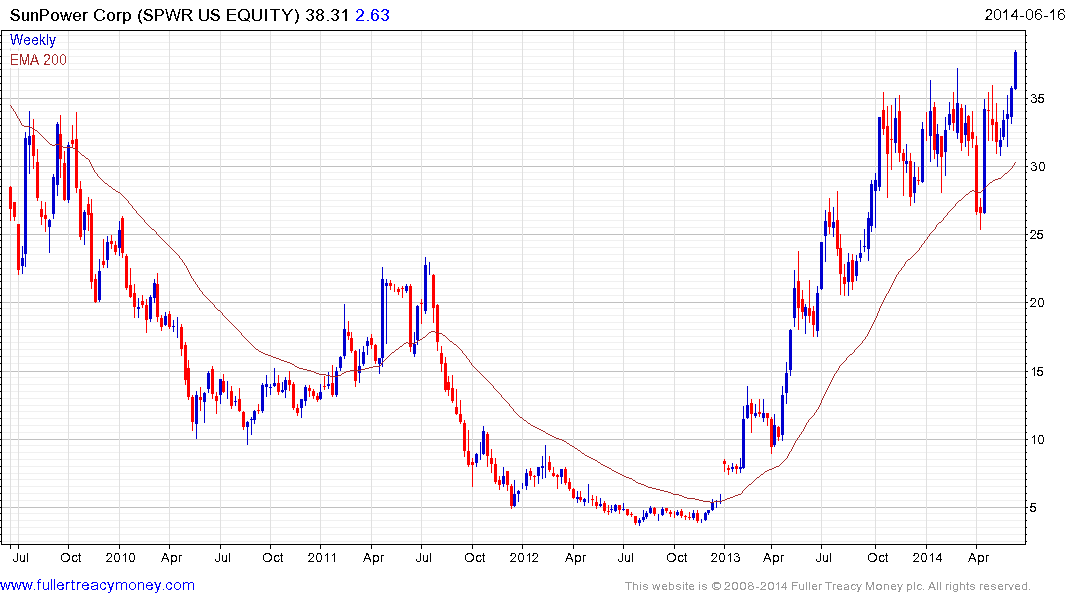 SunPower builds and services solar panels and also builds solar power plants. Through its partnership with Google it is also beginning to finance installations. The share spent much of the last year ranging in a relatively gradual process of mean reversion but broke out today to reassert the medium-term uptrend. 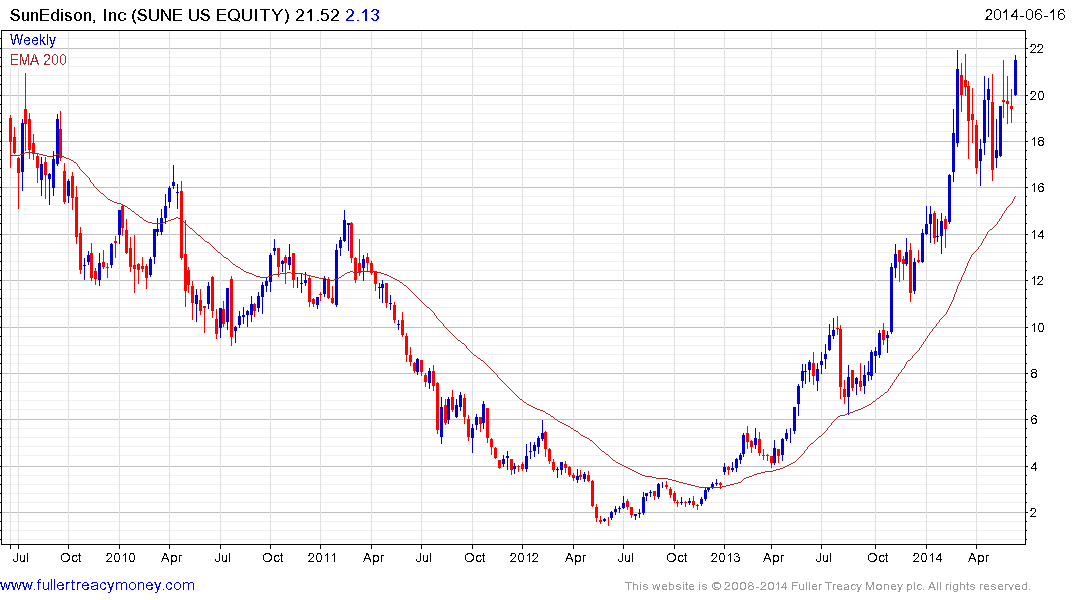 SunEdison has a similar pattern. 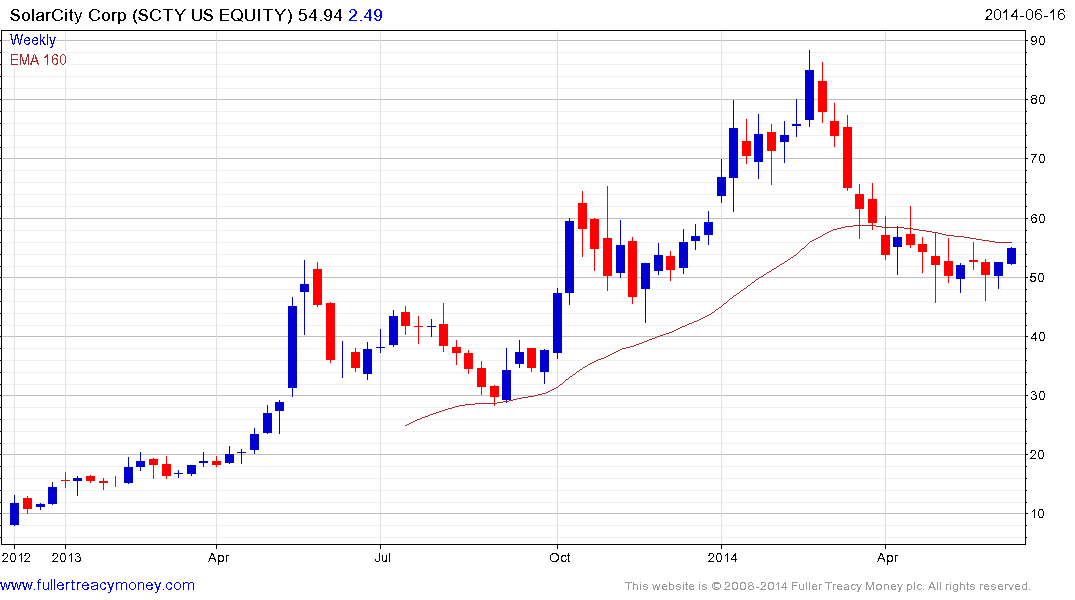 SolarCity finances installation of solar panels and helps service them once running in return for a service contract. The share pulled back sharply in March but has paused in the region of the 200-day MA and a sustained below $46 would be required to question medium-term scope for additional upside.

This article from the MIT Technology Review may be of interest.