Email of the day on Energy, Bank Capital & Cars
Comment of the Day

Email of the day on Energy, Bank Capital & Cars by Eoin Treacy

I still think European banking looks like Zombie banking.  We know European banks have capital deficiencies.  I think these banks are holding back a broad recovery in the European economy.  My sources continue to tell me European banks are still trying to shrink balance sheets.  I believe the ECB needs to be more proactive in solving this problem.  I see ECB is talking of QE - I am not sure this idea is the solution more likely the problem.   However the bank capital dilemma needs to be addressed quickly otherwise Europe faces a possible Japanese situation of low growth for decades.

Like you I am a strong believer in the big European global business brands and product solutions.  However the availability of credit is stifling growth in Europe's smaller companies and businesses.   From what I observe VW increasingly looks like it is going to dominate the global car industry.  Unless Toyota can catch up in this technology race they will lose their cherished Crown of the dominate global car producer.  As for old world car companies Ford , GM etc. sadly they look like a great short to me.  Every time I hire rental car in the US I come away with the thought how do US car companies do it so badly and remain in business.  I don't expect US cars to handle like my Porsche but US cars are just plain scary to drive.

Please keep up the good service.

Thank you for sharing your perspective on a range of topics. The revolution in unconventional supply of oil and gas can be viewed in terms of a supply response to high prices. At the beginning of the last decade $40 was considered the highest price possible for oil with the result that a great deal of additional supply was simply uneconomic.

Canadian bitumen becomes economic in the region of $40. Generally speaking more established offshore oil fields, such as the North Sea, have a breakeven in the region of $20-$25 while newer offshore such as Brazil’s pre salt ultra-deep water fields comes in closer to $45. A number of the unconventional plays have breakevens closer to the $50-60 area. As a result, we can conclude that price is the determining factor in which sources of potential supply are ultimately moved into production.

Cheap abundant energy makes achieving economic growth, in real terms, a lot easier. Unconventional oil and gas have been exerting a moderating influence on energy prices for at least the last few years and this is likely to continue. However since the breakevens for these new sources of supply are generally at what would have been considered high only a decade ago, we cannot consider them cheap energy sources. Even US natural gas, where the greatest effect on pricing is evident, is still trading at more than three-times the average for the period before the commodities bull market.

In order to achieve a goal of abundant cheap energy we need to use a lot more natural gas in order to displace oil. New nuclear also holds great potential. However it is in the development of solar technology where we have real potential to achieve cheap abundant energy. This article from Gizmag yesterday highlights how production of solar cells with greater efficiencies is improving. Here is a section:

"The strategy involves high-speed, printing-based manipulation of thin, microscale solar cells and new interface materials to bond them into multilayer stacks,” Rogers said. "Quadruple-junction, four-terminal solar cells that we can build in this way have individually measured efficiencies of 43.9 percent."

However, Semprius, which was co-founded by Rogers in 2006 to commercialize ultrahigh efficiency photovoltaic modules, promises that the same process will be capable of achieving efficiencies exceeding 50 percent in the near future.

Like the 44.4 percent efficiency record reported by Sharp last year, the 43.9 percent efficiency figure was achieved using a lens system to concentrate light onto the solar cells. Using a dual-stage optics system, the incident sunlight was focused more than 1,000 times. Modules created from the microscale solar cells also achieved efficiencies of 36.5 percent under the same conditions.

"This is very nice work," stated Ali Javey, a professor of electrical engineering and computer sciences at the University of California, Berkeley, who wasn't involved in the research. "The results are impressive, and the schemes appear to provide a route to ultra-high efficiency photovoltaics, with strong potential for utility-scale power generation."

If one thinks of solar as a technology subject to Moore’s law rather than as a resource to be mined then the potential for efficiencies to trend higher, possibly towards 50 - 60%, while the cost of this efficiency trends lower has the real possibility to completely revolutionise the energy sector and by extension the wider economy.

Additionally since solar can be interpreted in terms of a technology it has the capacity to be twinned with other technologies to create innovative solutions. This article from ETH Zurich covers the development of a method of producing jet fuel from solar and carbon dioxide. Here is a section:

Although the solar-driven redox cycle for syngas production is still at an early stage of development, the processing of syngas to kerosene is already being deployed by companies, including Shell, on a global scale. This combined approach has the potential to provide a secure, sustainable and scalable supply of renewable aviation fuel and more generally for transport applications. Moreover, Fischer-Tropsch derived kerosene is already approved for commercial aviation.

As a global leader in the application of the Fischer-Tropsch method South Africa’s Sasol (Est P/E 10.26, DY 2.26%) is rallying towards the upper side of a three-year range and a break in the progression of higher reaction lows would be required to question medium-term scope for additional upside. 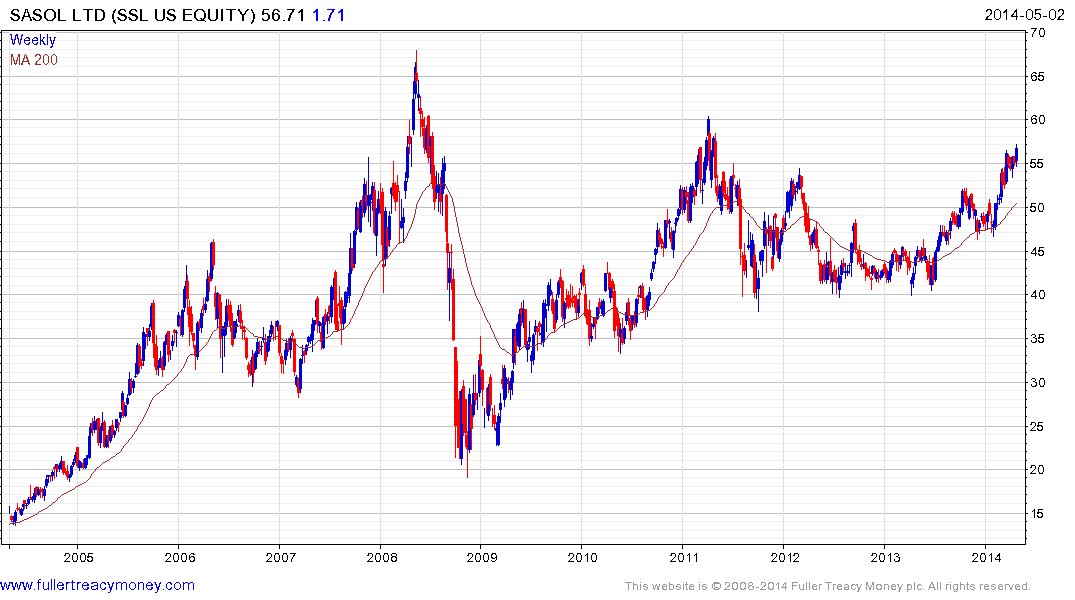 This all very exciting but let’s not get ahead of ourselves though.  These discoveries might be coming through at an exponential rate but it will still take years before the roll out has a meaningful effect on energy pricing. Therefore unconventional oil and gas represent a bridging solution before greater efficiencies and cost improvements come through in the coming decades.

With regard to the Eurozone banking sector, there is no denying that they have not written off bad loans to the same extent as US banks, so they continue to have capital adequacy challenges. As a result the ECB remains proactive in providing them with as much funding as they require. The question of how to foster domestic demand growth within the Eurozone remains unanswered, not least as a policy of fiscal consolidation continues to be enforced. Therefore I agree that the Eurozone as a whole is likely to grow at a less than optimal pace. However, since the region’s stock markets were generally priced for calamity, they still have potential for positive rerating.

GM and Toyota have been plagued by recalls but multiples are generally unchallenging and demand has improved as consumer balance sheets have been repaired. In such cases it is generally better to be guided by the consistency of individual trends.