How do you think about liquidity in the context of a narrow theme like Uranium? And how would you measure it in this case? Volumes picking up and an increase in market capitalization of the sector? Or does it all tie back to the Fed and other central banks

Thank you for this question which may be of interest to other subscribers. Uranium is a comparatively small market with lots of minor constituents and a couple of large producers. When investing in any illiquid market, whether a sector or country index, weight of money moving in and out can have an inordinate effect on prices. That generally means you will not have an issue buying but selling often needs to be done in anticipation of a peak because liquidity can quickly evaporate during a downturn.

Uranium miners are currently buying on the spot market because prices are lower than the cost of production. That situation has persisted for more than a year and it is only a matter of time before the excess supply is worked off. In that calculation the actions of Japanese utilities are key because they hold a lot of supply. If they restart more reactors that will restrict sales but if they decide to liquidate their holdings it will represent a headwind to prices.

From that perspective the actions of central banks are not all that important. The outlook for oil, the health of the global economy and China’s reactor building program are probably of more importance.

This report from Eight Capital may be of interest. Here is a section:

Trump and Perry’s speech highlight an overall goal of fostering domestic production   and   exportation   of   both   energy   fuels   and   low-emissions technology, in order to compete internationally and maintain US national security. We are a long way from seeing US uranium exports, but the tone of the speech confirms our expectation that a quota system for nuclear utilities will be announced and for Government agencies to “buy American".  The outcome could be an increase in US spot prices and to stimulate US uranium production, as recommended by the DOC.  A small quota of 5% of US requirements (2.5 MM lbs pa) may increase over time but should not significantly impede US nuclear utilities. We also expect direct nuclear sector support in the form of R&D grants and reduced regulation. Trump's Uranium Section 232 decision is expected by July 14, 2019.  The potential for higher prices bodes well for the entire industry, but we believe that uranium companies with US exposure and holding companies may benefit the most.  This includes Cameco, Uranium One, Energy Fuels, Ur-Energy, Uranium Energy, Peninsula, Azaria, Laramide and others.  A positive decision would likely move uranium stocks first.  Until uncertainty surrounding any new US U3O8 purchasing mechanism is understood, only then would prices follow. 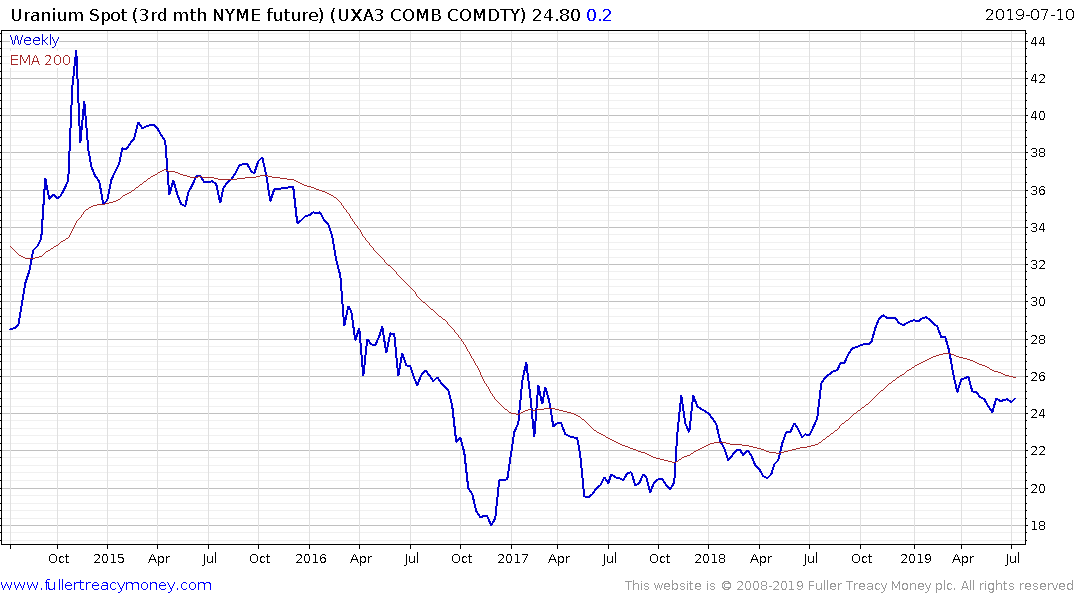 Uranium prices will need to hold the sequence of higher reaction lows if the benefit of the doubt is to be given to higher to lateral ranging. 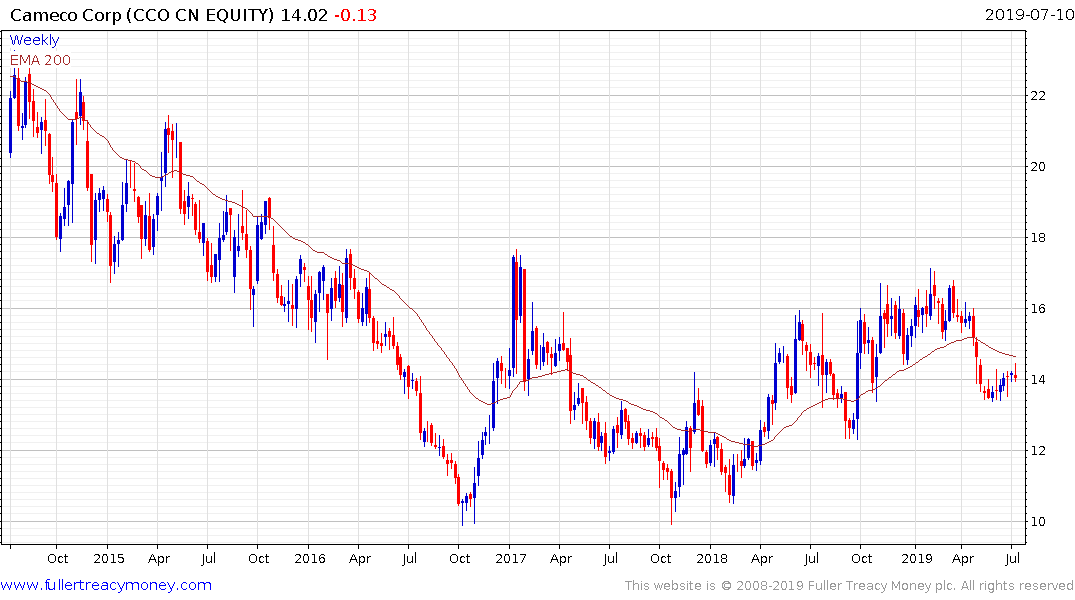 Cameco has held a progression of higher major reaction lows since late 2017 and will need to hold the C13 area if higher to lateral ranging is to be given the benefit of the doubt.