I hope life for you in California is more fun than it is here in England. But let's hope we really are past the low point as far as the virus is concerned. I had thought that would be true for economies too, but this latest move by President Trump (summarised in the article by Ambrose Evans Pritchard) does raise questions. With this move, which asset classes do you think will benefit and which will lose on a 3-6 month timescale?

Best wishes to you and family.

Thanks for the well wishes and this article which may be of interest to the Collective. All is well with us since the streets were blessedly free of protestors following the election. I guess they got the result they wished for. Here is a section from the article:

He instructed Fed chairman Jerome Powell to return the unused portion of a $454bn (£342bn) account approved by Congress during the market meltdown in March. This seed money gave the Fed $4.5 trillion extra lending power under a policy of 10:1 leverage and had an electrifying effect on market confidence, helping avoid the errors made in 2008.

Krishna Guha from Evercore ISI said the Fed’s market stabilisation policy had been politicised. Congressman Bharat Ramamurti, a member of the House oversight committee on stimulus, called Mr Mnuchin’s move an unjustified and ideological decision by the treasury department.

The Fed retains its monetary policy powers and can purchase further US treasury bonds but that is a blunt tool at this juncture unless it is married to aggressive fiscal expansion, which the Republican Senate has vowed to block.

The Fed is concerned that more QE will chiefly inflate asset prices without doing much to help the real economy, exacerbating social inequality.

Congress stripped the Fed of its discretionary powers under Article 13 after the Lehman crisis. The Fed now needs permission from the treasury to go beyond its normal mandate. This was granted immediately during the panic in late March.

It’s tempting to look on this action as a poison pill enacted to ensure the Biden administration is hamstrung from the get go. However, the Treasury secretary can make whatever decisions they wish, about what policies to permission. It is looking increasingly likely that Janet Yellen will be appointed Treasury secretary, so there is likely to be a very smooth relationship with the Fed in the next administration.

With PMI and Retail sales figures now above where they were ahead of the pandemic there is logic to winding down some of the emergency measures. It also worth considering that it was the sheet breadth of different programs rather than the uptake from them that helped to stablise markets and the economy. For example, the Fed bought relatively few corporate bonds and barely used the main street lending program.

The funds allocated for those programs were not designed to solve the longstanding budget and pension programs of individual states. It is quite likely that the decision was made to attempt to ensure that headache persists for the next administration.

From an investment perspective, the Fed is going to supply whatever assistance is needed and the Treasury will play along as required. With Pfizer, Moderna and now Astra Zeneca posting positive phase III trial data, we are swiftly approaching the end of the lockdown phase. I started talking and writing about pandemic hysteria in September. Two months on, we have seen the number of cases surge as predicted but the death rate has been much better contained. 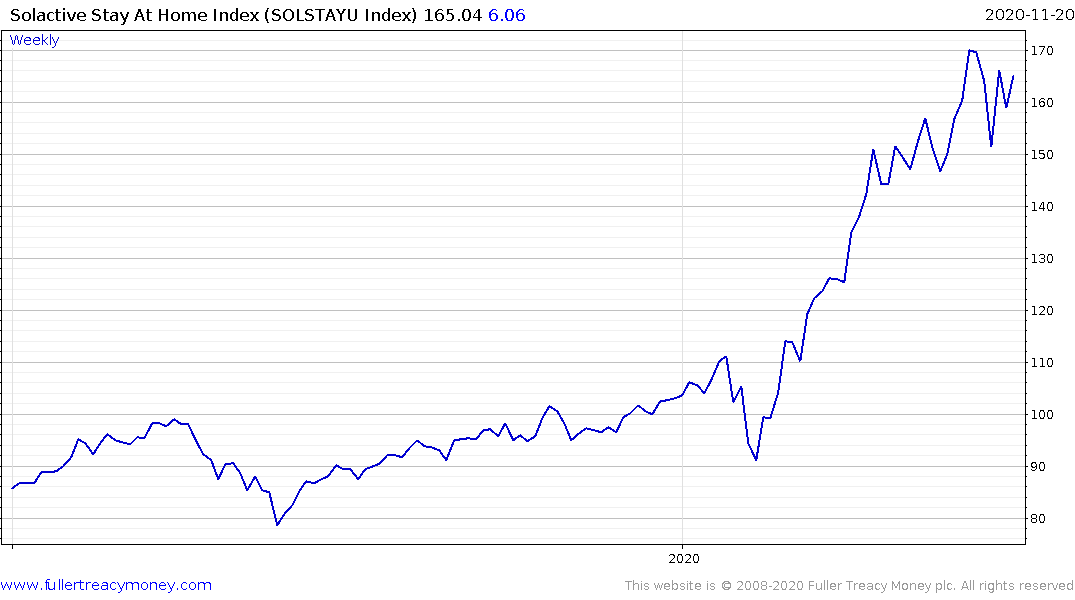 Stay At Home champions have been by far the best performers in 2020. The pandemic forced mass adoption of remote work and learning technology which greatly accelerated the trend. That growth rate will be virtually impossible to repeat in 2021. The Nasdaq-100 has lost momentum but small caps and mid-caps are breaking out.

The rationale is clear. The buzzword in 2021 will be reflation. Every government will do whatever it takes to spur synchronised global economic expansion. Industrials, energy, commodities, travel and tourism and emerging markets all stand to benefit. 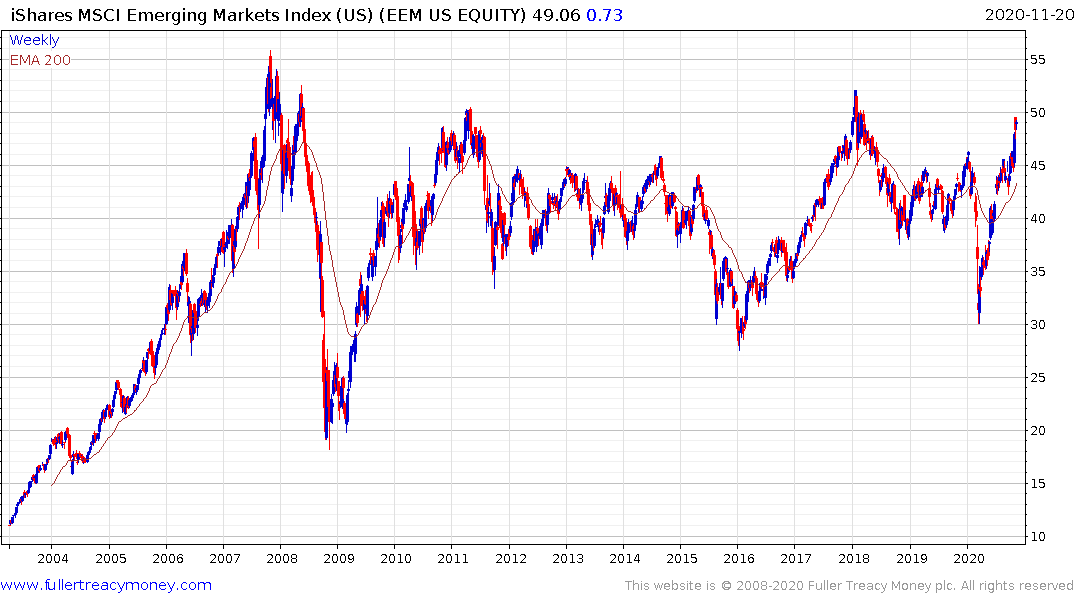 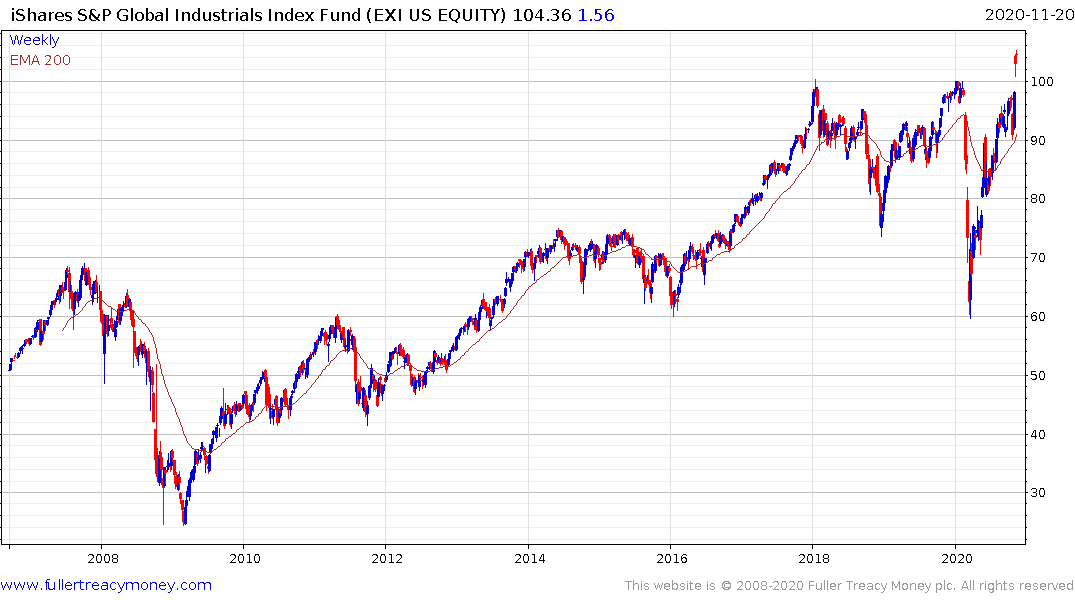 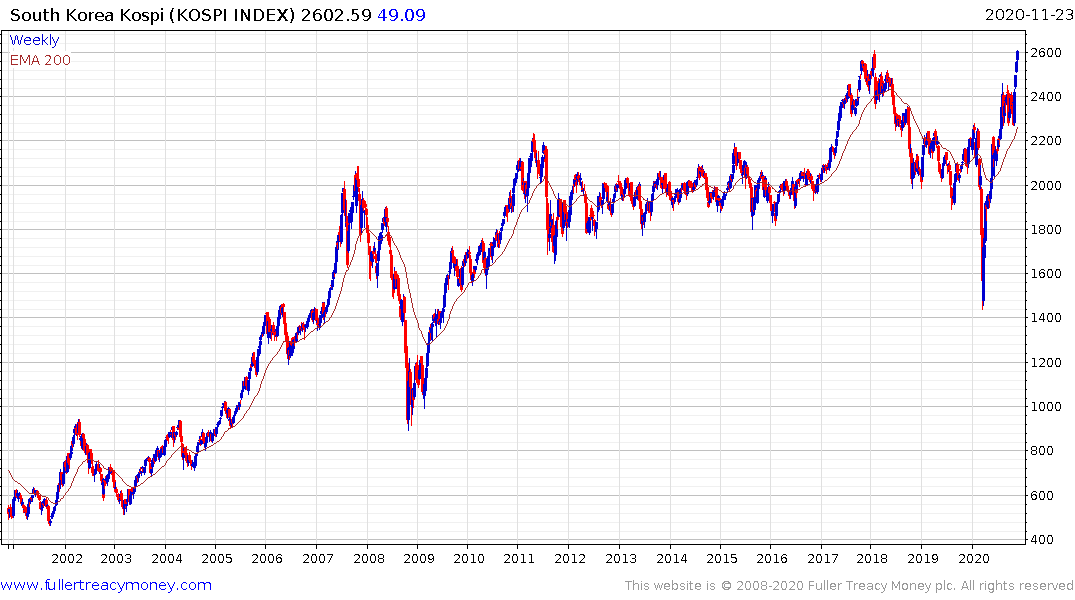 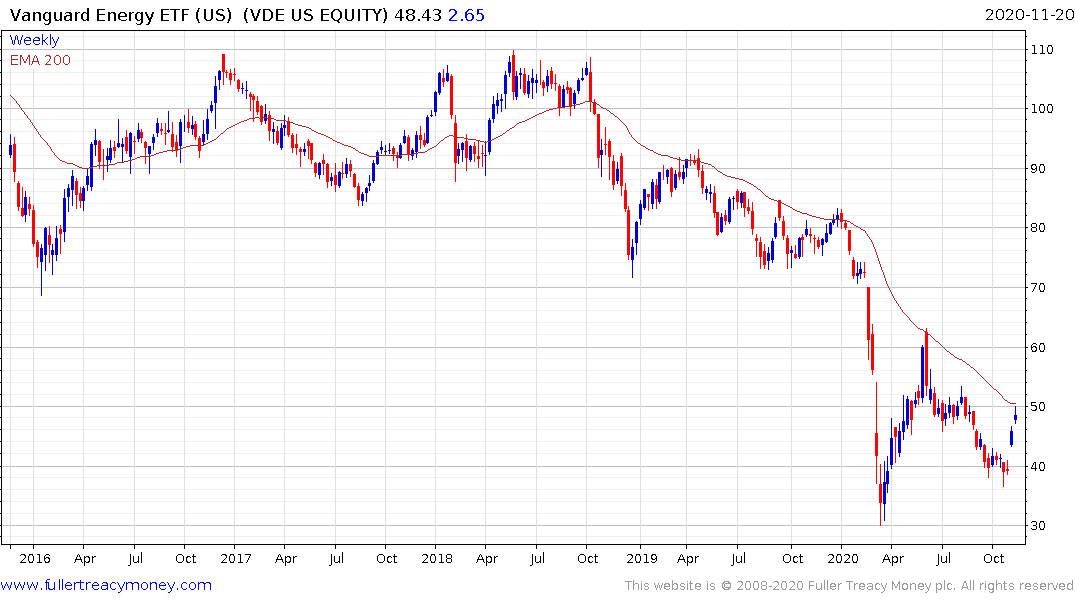 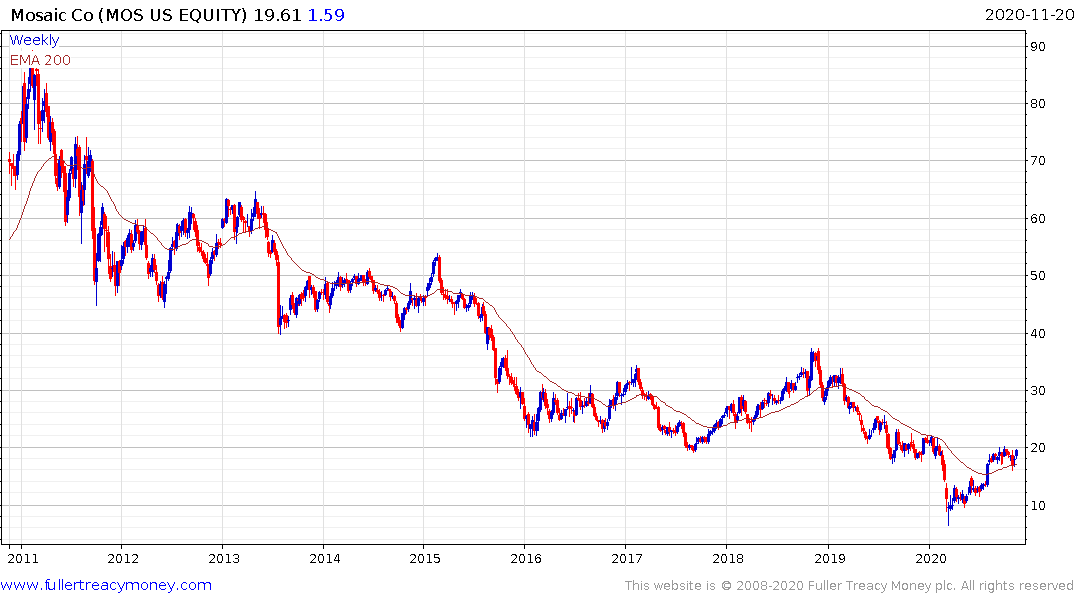 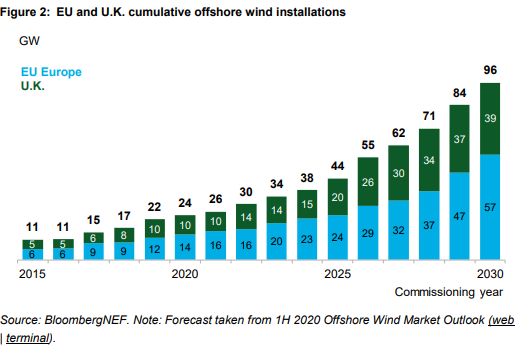 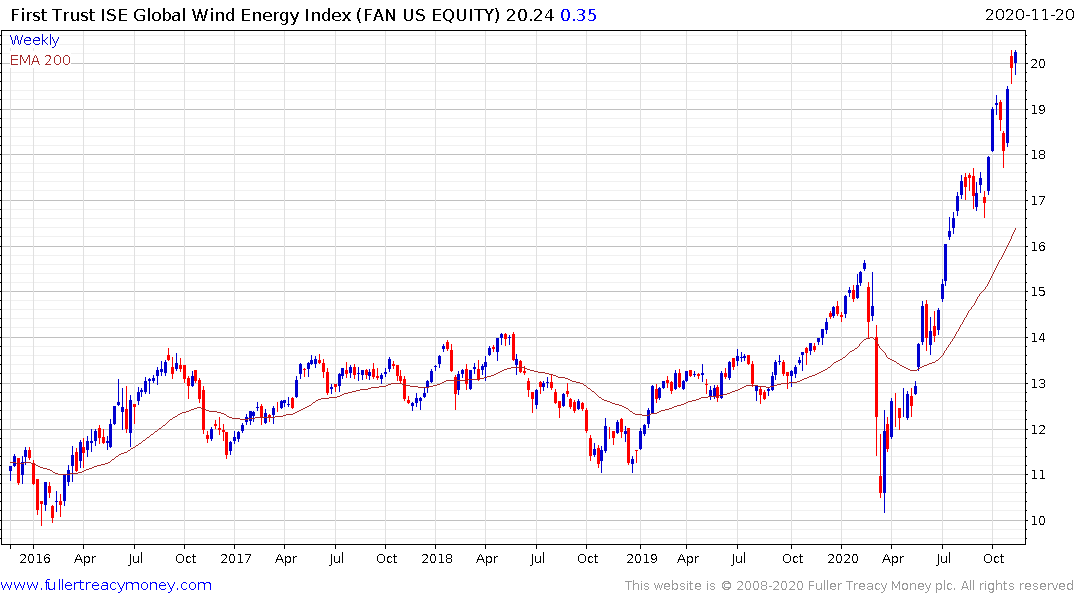 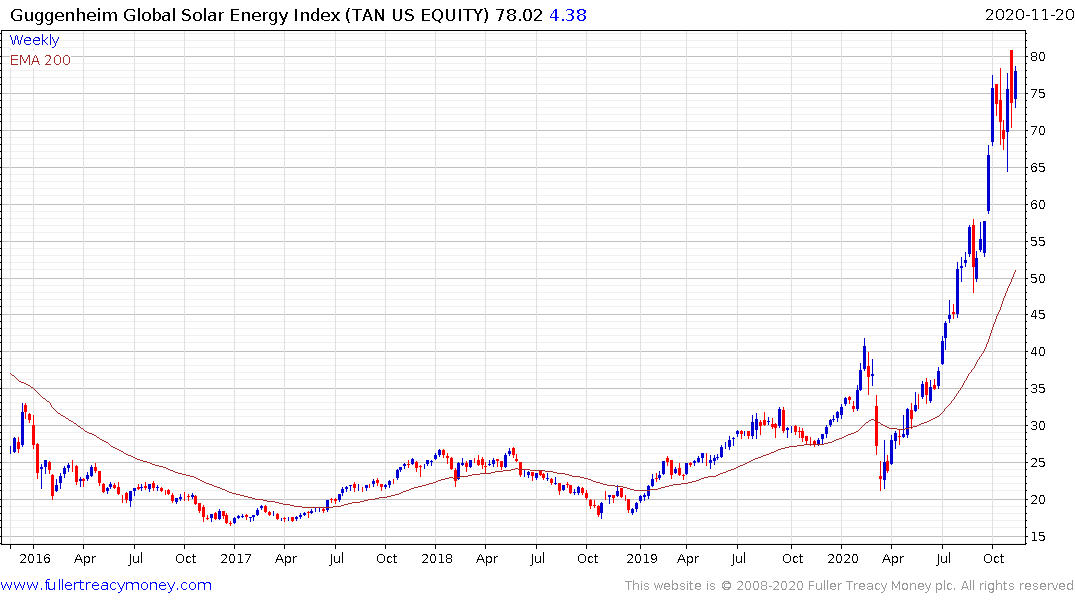 With the EU planning to boost wind power capacity by 25 times up to 2050 and China also planning to boost its carbon free credentials, the stage is set for massive infrastructure development. That’s positive to lithium and copper demand as well as for the solar and wind companies themselves.