Email of the day - on the early stages of a secular bull market.
Comment of the Day

Email of the day - on the early stages of a secular bull market. by Eoin Treacy

Until the beginning of last year you often spoke on the theme of the early stages of a secular bull market. David had begun speaking about it as long as 4 years ago. But with the onset of the pandemic, you have been largely silent about it. Has it stalled or, in your view, already peaked?

Thank you for this important question. In October 2008, I remember sitting at my desk and looking at the calculation that the S&P500 was sitting on the widest overextension relative to the 200-day ever. Acceleration is always a trend ending and the crash signalled the beginning of the bottoming process. By the time Wall Street reached its nadir in March 2009 many instruments were well off their lows and by the end of the year the leaders were making new highs.

Gold, commodities, ASEAN and technology took off. Of these, technology is the only one which had uninterrupted staying power all the way through the bull market to date.

In 2013 we were still in the disbelief phase. The bull market was still young and few people were invested. That’s consistent with the first psychological perception stage of the bull market. Over the subsequent seven years, we moved into the acceptance or second stage. After successive rounds of quantitative easing and the impressive advances in new technology companies, everyone got the message. Central banks will bailout the market.

Secular bull markets often climax in a mania and we are at the beginning of that phase today on Wall Street. When I see TikTok day traders saying they only buy the stocks that go up, against a background of high and rising valuations, I can only conclude this is a mania.

I do want to stress we are at the beginning of the mania, rather than the end. Zoom Media just raised $2 billion in an additional share offering, with little in the way of resistance from the markets. Many of these new companies might not have a route to profitability, but they have sufficient cash on hand to survive for another year or maybe two. Financial conditions remain very accommodative and that fuels speculation.

This chart of the difference between the equity and bond yield highlights how cheap stocks were relative to bonds in March. Low yields distort all absolute valuation metrics but flatter relative value metrics. It is reasonable to conclude that the time to really worry about a bubble popping would be when this spread trends back to the lower side of the range. That would imply Treasuries yield will be 100 basis points more than is available from equities. 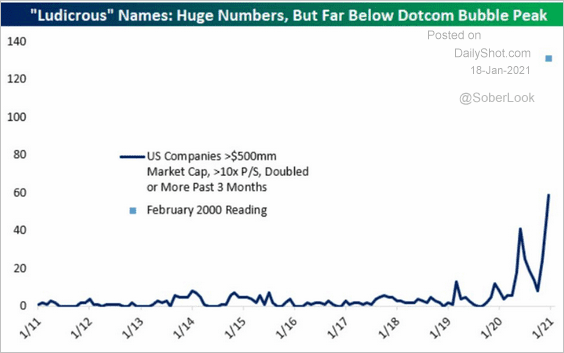 This bull market on Wall Street will not end until liquidity tightens. With the incoming Biden administration looking at a $1.9 trillion stimulus on top of the expected $2 trillion deficit, there is going to be no shortage of speculative flows. That is already taking a toll on the Dollar despite the short-term bounce over the last week. 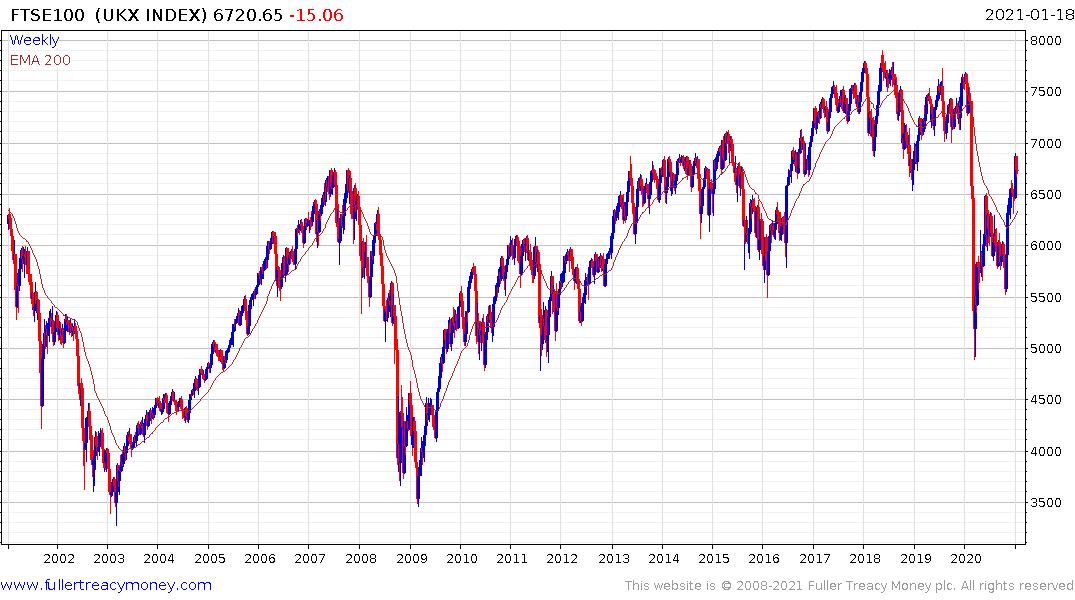 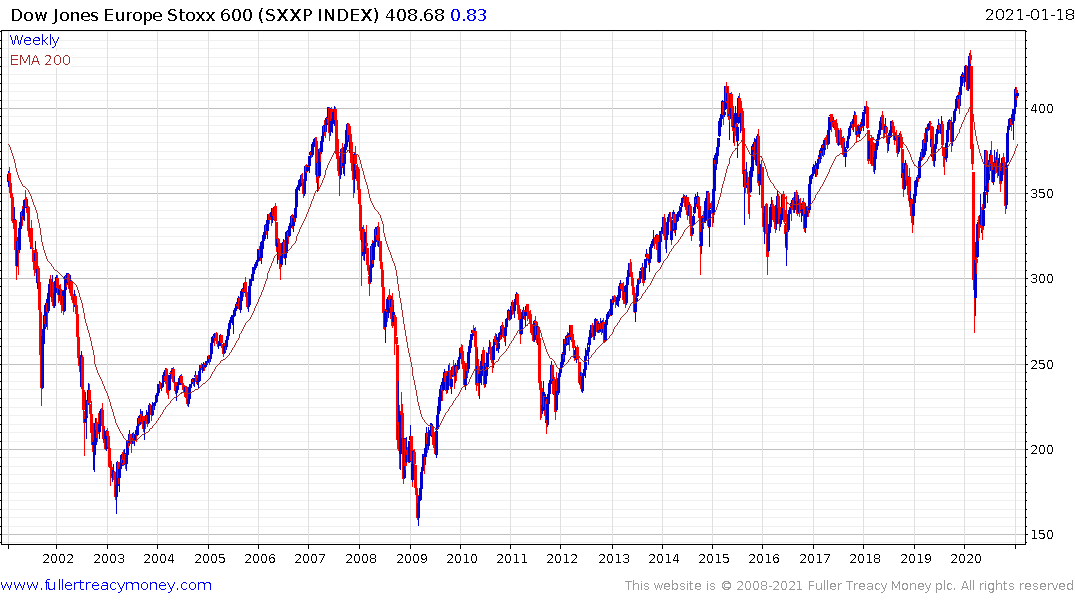 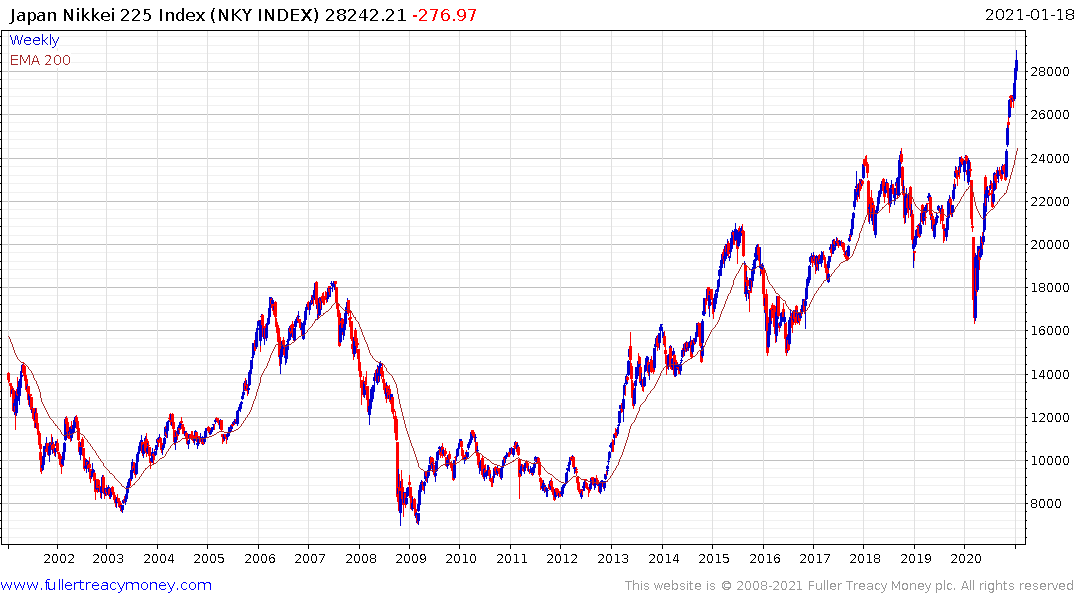 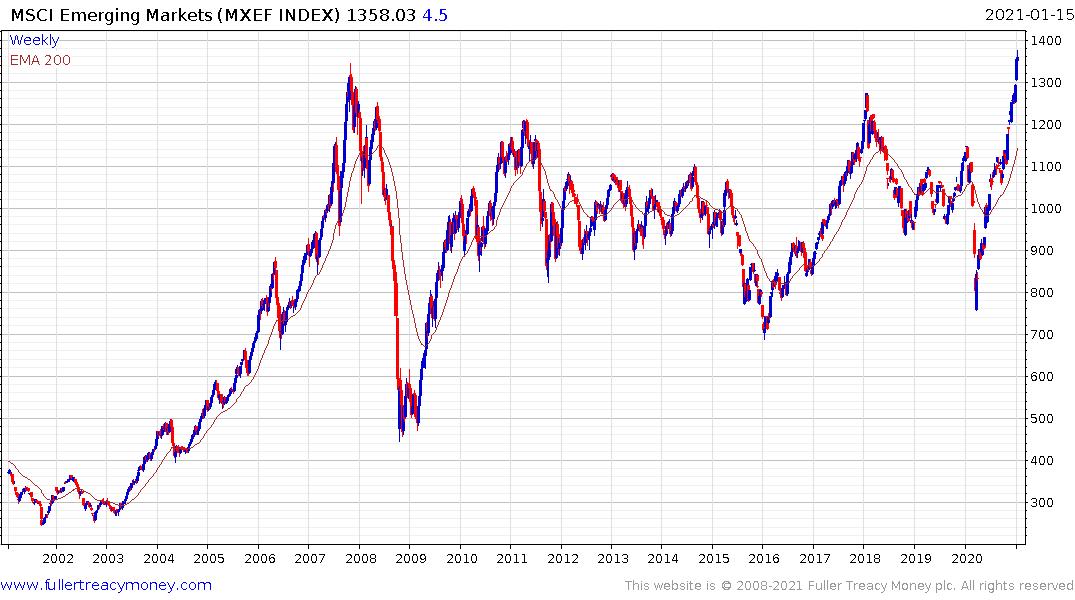 If we look around the world the big breakouts from long-term ranges, which are consistent with the beginning of new bull markets have all occurred Asia, the UK, Europe and in commodities. If we are looking at where outperformance over the next several years is going to be concentrated base formation completion is where the base effect has the most power.

That doesn’t mean the mania on Wall Street can’t continue, but mega-caps leadership has narrowed signfiicantly and demand is migrating to smaller shares.