Email of the day - on hydrogen
Comment of the Day

Email of the day - on hydrogen by Eoin Treacy

I wondered if you had come across HydrogenOne. The Investment Trust came to market on 30 July.  The trust has not yet invested in any assets but its website outlines what it sees as its worldwide "investable universe" of assets and also describes in outline how it will identify potential investments. Sir Jim Ratcliffe and INEOS have a stake.

What I found particularly interesting and enlightening is that they have produced a "bluffers guide" to hydrogen which is attached (and is also on their website). Subscribers might also find this useful.

Thank you for this informative email which I’m sure will be of interest to the Collective. I have added HydrogenOne Capital Growth Plc to the Chart Library.

Here is a section from the report:

We expect material green hydrogen manufacturing to commence, particularly in around the high-quality wind resources in the North Sea (UK, Netherlands, Denmark), the wind and solar resources of Southern Europe, Middle East and Australia. We expect many of these activities to be clustered around industrial zones and ports, with off-takers in incumbent hydrogen[1]consuming sectors and centralised bus and truck fleets.

Hydrogen fuel cells have been deployed at commercial scale in selective transport applications, such as fork lift, city buses, and portable power generators. We expect to see rapid build out of these applications to continue, particularly in the multiple countries and cities that have committed to early phase out of ICE transport. Much of this hydrogen will be derived from dedicated hydrogen hubs, which will have offtake agreements and supply logistics configured to specific transport fleets, industrial sites and other customers.

2025-2030.
In this timeframe, we expect to see the emergence of larger clean hydrogen manufacturing sites, with a more rapid pace in growth in green hydrogen ahead of other sources, at 500MW or larger scale. As intermittent and seasonal renewable energy grows in the overall mix, the requirement for energy storage for system buffering will be met by geological storage of hydrogen and Compresses Air Energy Storage (CAES). Blending technologies and mandates to distribute hydrogen via modified natural gas infrastructure will become widespread.

Hydrogen should be more widely available to short term contracted and spot market customers at this time.

We expect to see the deployment at scale of hydrogen used for building-scale heat and power (“CHP”), and hydrogen burned in modified turbines at large scale power plants, which are in the pilot stage today. A wider uptake of hydrogen in trucks, trains and shipping will come alongside the buildout of HRS. We expect to see hydrogen introduced more widely by blending with natural gas in modified natural gas grids.

2030 and beyond.
In the longer term, once single hydrogen production projects have been scaled up to 1GW and beyond, and distributed projects have been successfully built-in industrial centers and ports, we expect that hydrogen use will move into the public consumer areas. At this point fuel cells could be economic for passenger vehicles, particularly heavy applications such as SUVs. Hydrogen will likely have been rigorously tested in the aerospace industry and hydrogen powered aircraft could be in mainstream use, either in fuel cells for turboprop, or via synthetic fuels in jets.

My view - Within the commodity markets the adage “the cure for high prices is high prices” is well known. The opposite is also true. The massive oversupply of natural gas arising from unconventional drilling created a price disparity that encouraged demand growth. Gas fired power stations replacing coal, the USA’s new export terminals are another but the hydrogen economy was also birthed from low natural gas prices.

As the world looks at ways to move towards carbon free energy development and utilisation hydrogen is increasingly being looked to as a viable solution. This is another example of a technology which has been on the drawing board for decades. Yesterday I discussed how the pace of innovation in healthcare has been ignited by the demand for a solution to the coronavirus pandemic. Companies have been research hydrogen fuel cells for decades but there was never a catalyst to stir a migration. Climate change and the desire for energy independence could be it.

Clicking through the constituents of the hydrogen/fuel cells section of the Chart Library, a deep correction has been underway since the beginning of the year. That’s been true of the wider renewables sector as interest rate uncertainty sapped investment demand. A large number are now in the region of their respective trend means or have unwound significant percentages of their respective initial surges. There is the possibility that the release of the IPCC report will the catalyst for renewed interest. 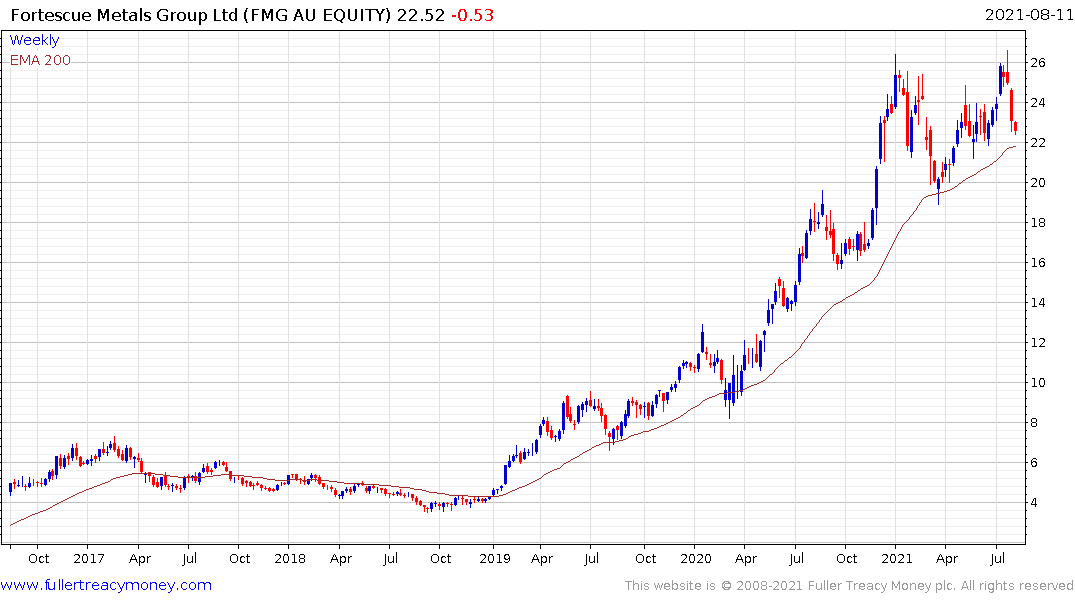 Fortescue Metals is still mostly an iron-ore miner. It may rely on hydrogen production in the future but will need to spend a lot of money to reach that endpoint. The share is currently reverting towards the mean. 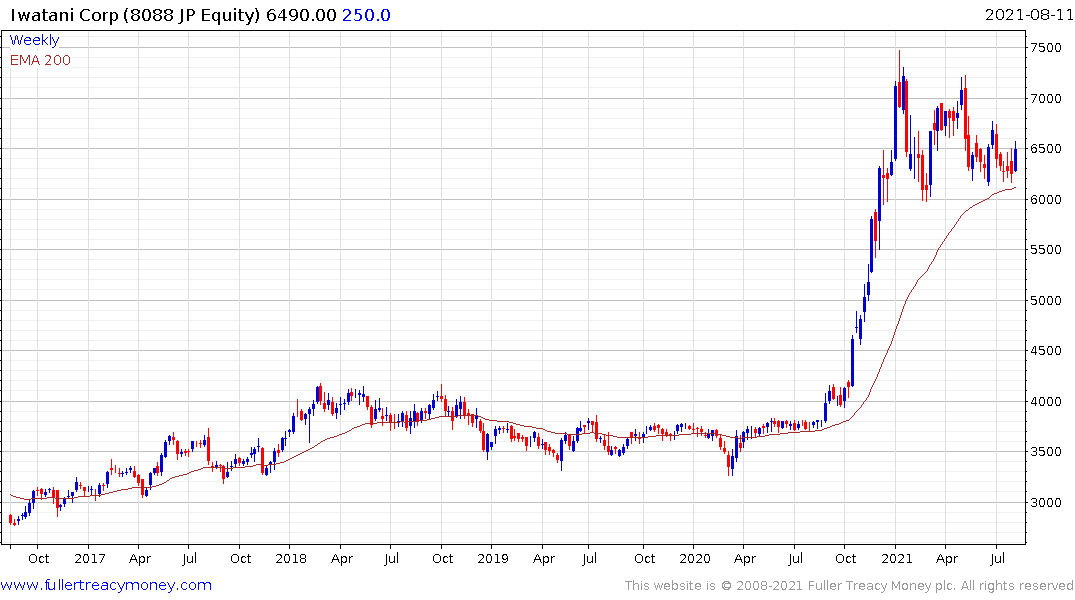 Iwatani Corp is firming from the region of the trend mean. 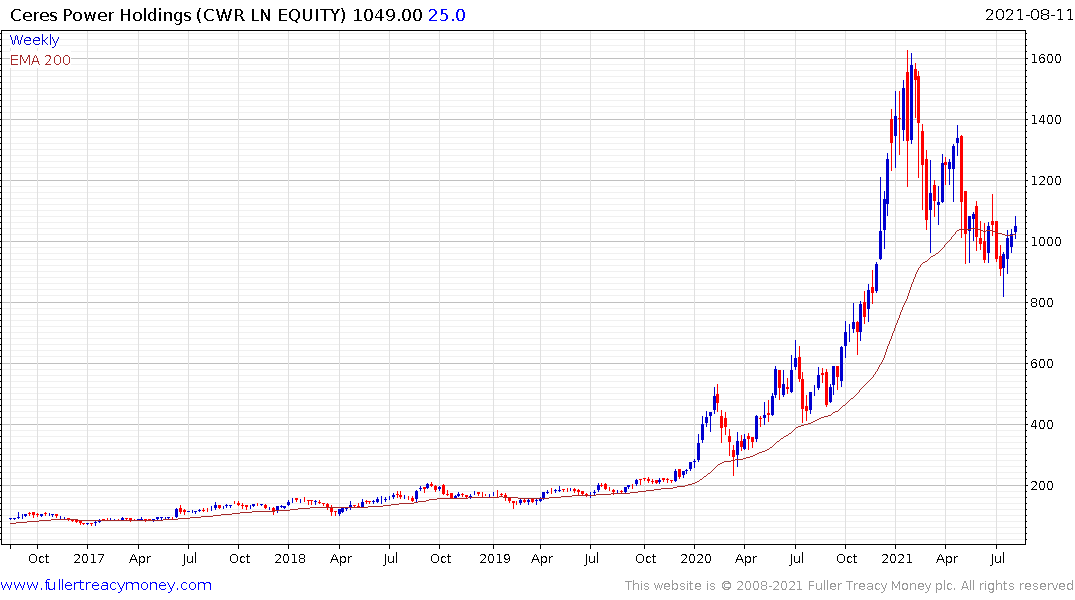 Ceres Power which licences its technology to Weichai Power is challenging is sequence of lower rally highs. 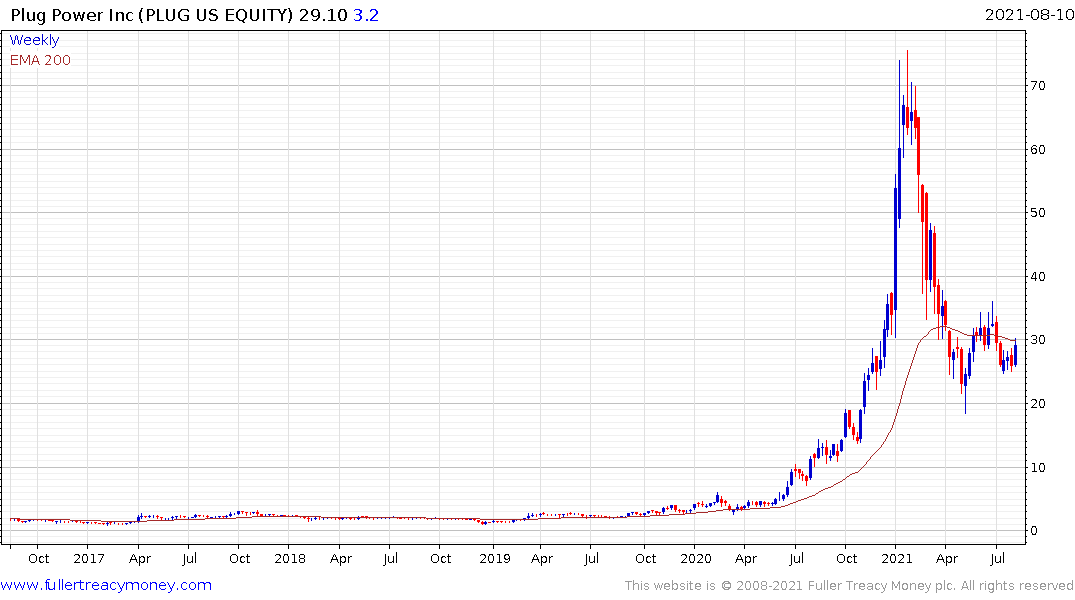 Plug Power is attempting to put in a higher reaction low following a steep decline.