Yer man, while I often feel like I am part of the new old economy. I am not concerned in the near term that electric vehicles will have mass adoption. I am puzzled how the electrical grid will power all these new super cars? Coal which is the worst emitter of GHG's is the primary source of electrical generation in North America and that is being phased out for natural gas as you know. The environmental movement is flawed with hypocrisy and makes no economic sense. In Canada the govt has chosen to demonize the oil and gas industry which funds the majority of our social services and yet we bail out Bombardier and the auto industry. I sound like a grumpy old man.

Thanks for this topical comment to a piece I posted on Friday. It’s been a long time since we shared an apartment in London; when we were both new to London, and I’m glad you’re still in the heat of the action in Calgary. I think everyone finds it hard not to be grumpy when things are not going one’s way at any age.

This article from the state.com from 2014 estimates that if every car in America was an electric vehicle it would represent only about a 30% increase in electricity demand because electric vehicles are more efficient.

There is no doubt that we are living through a rapidly evolving energy sector with prices low, new sources of supply emerging and Saudi Arabia contemplating a sale of the country’s most valuable assets. Let’s harken back to simple market economics. When the price of a vital commodity drops demand increases.

We’ve lived through a decade when energy was expensive so we are all now much more efficient users than when prices were low. Whether consumers are likely to have the same regard for their carbon footprint in a low energy price environment is yet to be proven. The normal course of events is that demand from new uses of energy would eventually soak up the excess supply.

Driverless cars, for example, could mean that traffic increases because personal drones could do much of the menial tasks we all detest such as running to the post office, dropping off and picking up dry cleaning, picking up prescriptions and grocery shopping. Amazon and Google and a range of super markets are already doing deliveries but are eager to replace people with drones and robots.

The drive to replace coal with natural gas in the utility sector is a powerful trend that will eventually help to absorb the excess supply currently evident in the natural gas sector at the expense of coal. However this is going to take time. The evolution of solar and batteries represents a major evolution for the energy sector and is even more disruptive than unconventional oil and gas has been. Technological innovation is pushing the boundaries of what is possible and there is real potential that the link between energy and extractive resources has been broken. However, even in the most bullish scenario for renewables it will take decades to implement these changes. In the meantime we can expect a great deal of volatility in energy prices both up and down. This article from McKinsey, kindly forwarded by a subscriber, may also be of interest.

Coal companies are facing bankruptcy but the survivors will be in a much stronger position because they will be majority suppliers with little competition. Despite claims to the contrary coal fired power stations are not going to disappear but it is a declining sector. The pain is not over but there are tentative signs of life. 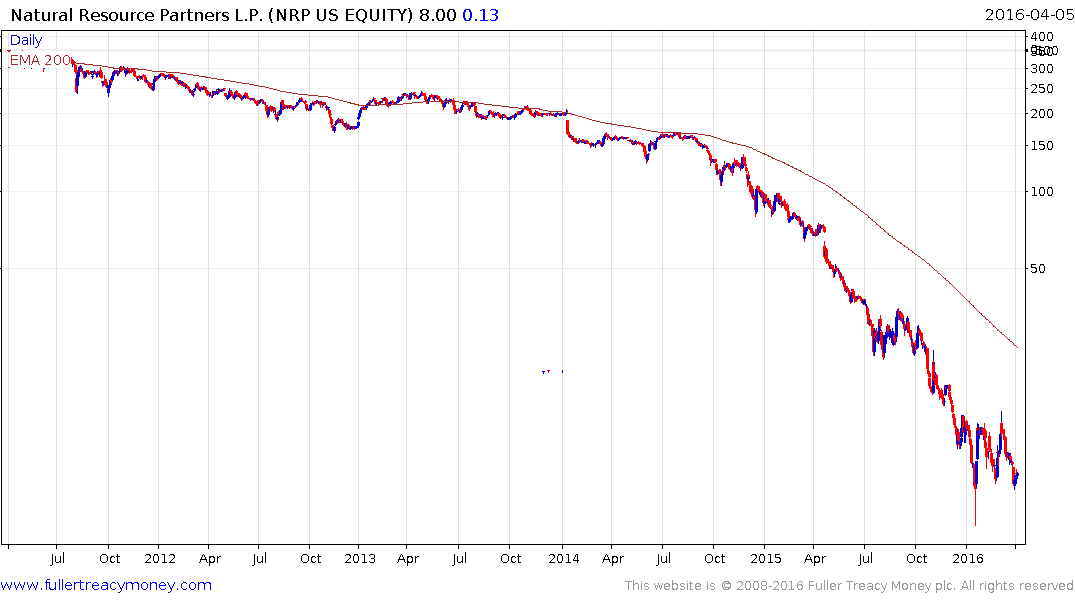 For example National Resource Partners LP is a royalty streamer leasing mining rights to coal companies. It has an estimated P/E 1.5 and yields more than 20% despite having its dividend as recently as November. The downtrend has lost momentum and a break back above the trend mean would signal return to demand dominance. 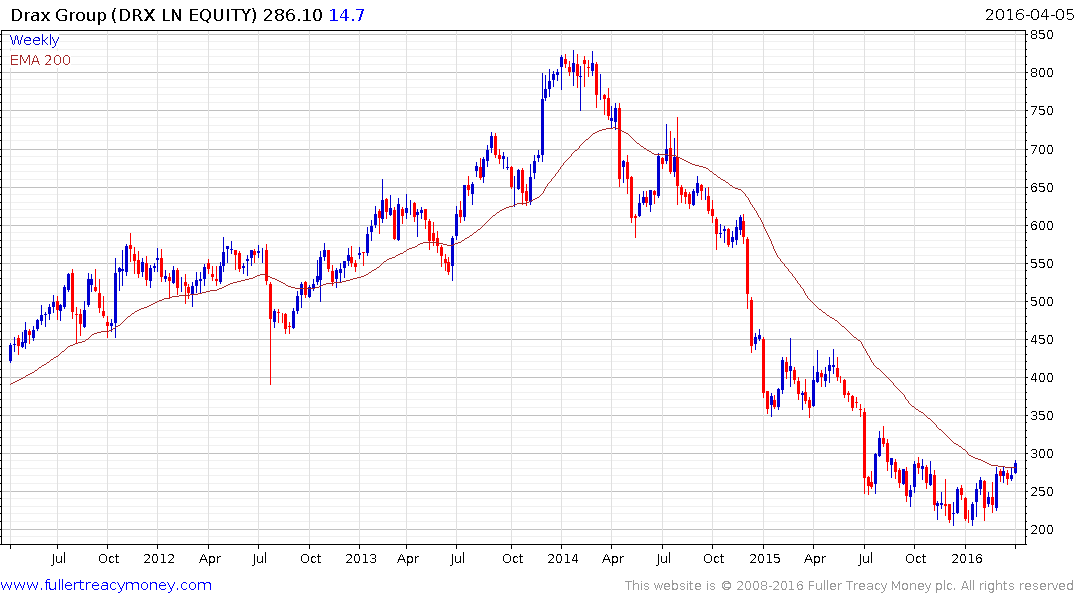 UK listed Drax Ltd is the UK’s only remaining pure-play on coal-fired power stations. The share dropped from over 800p to 200p between 2014 and late 2015 and rallied this week to push back above the 200-day MA.