That’s why Goldman Sachs calls lithium the “new gasoline”. It’s also why The Economist calls it “the world’s hottest commodity”, and talks about a “global scramble to secure supplies of lithium by the world’s largest battery producers, and by end-users such as carmakers.”

In fact, as the Economist notes, the price of 99%-pure lithium carbonate imported to China more than doubled in the two months to the end of December—putting it at a whopping $13,000 per ton.

But what you might not know is that this playing field is fast becoming a battlefield that has huge names such as Apple, Google and start-up Faraday Future throwing down for electric car market share and even reportedly gaming to see who can steal the best engineers.

Apple has now come out of the closet with plans for its own electric car by 2019, putting it on a direct collision course with Tesla. And Google, too, is pushing fast into this arena with its self-driving car project through its Alphabet holding company.

Then we have the Faraday Future start-up—backed by Chinese billionaire Jia Yueting–which has charged onto this scene with plans for a new $1-billion factory in Las Vegas, and is hoping to produce its first car next year already.

Ensuring the best engineers for all these rival projects opens up a second front line in the war. They’ve all been at each other’s recruitment throats for months, stealing each other’s prized staff.

And when the wave of megafactories starts pumping out batteries—with the first slated to come online as soon as next year–we could need up to 100,000 tons of new lithium carbonate by 2021. It’s an amount of lithium we just don’t have right now.

Describing lithium as the “new gasoline” is an interesting take on the projected demand for electric cars. Last week’s Bloomberg article proclaiming batteries would cause the next oil crisis would appear to be in the same vein. These estimates are based on the fact that large battery factories are going to come on line in the next 18 months and not just Tesla’s giga-factory in Nevada. With additional supply, prices can be expected to decline and demand should rise. Home batteries and home charging stations are likely to become much more visible and utilities are already installing industrial scale batteries to tackle intermittency of renewables and to become more efficient with fossil fuel use. 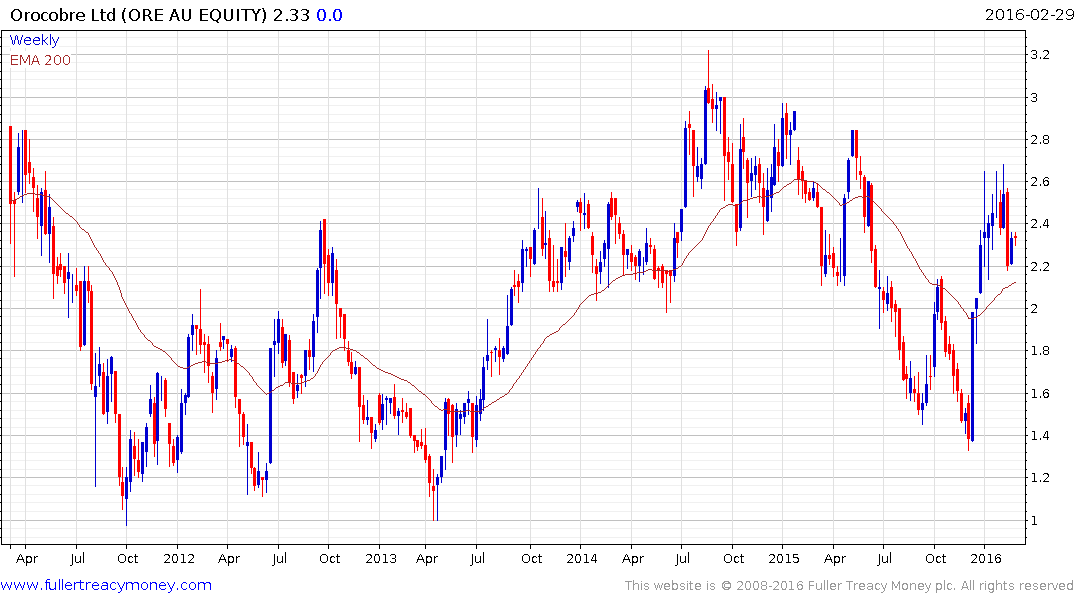 Australian listed Orocobre has a new lithium brine operation that opened in Argentina last year. The share bounced last week from the region of the 200-day MA and a sustained move below A$2 would be required to question medium-term upside potential. 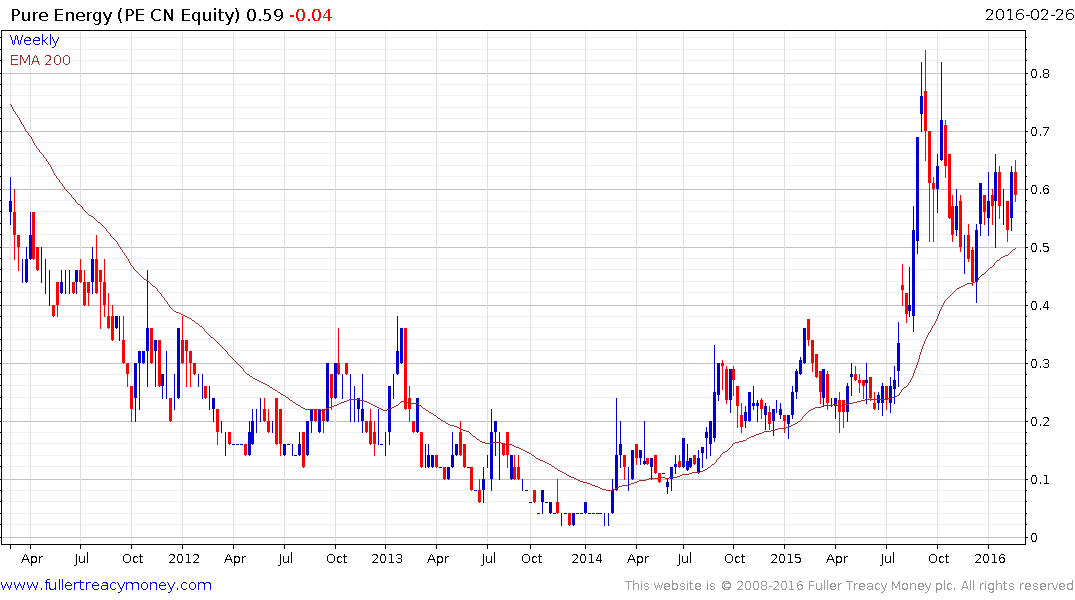 Canadian listed, Pure Energy, highlighted in the above article has a market cap of $29 million.  The share has been ranging in a first step above its four-year base since breaking out in July. A sustained move below 50¢ would be required to question medium-term upside potential.