NIO, BYD and Xpeng are examples of Chinese electric-vehicle makers that have surged in value, buttressed by national targets regarding electric vehicles on the road and investors' search for the next EV titans. The American depositary receipts in these companies have surged this year and the meteoric rises put their valuations in line with large traditional car makers, such as General Motors and Ford Motor. To help cut carbon emissions, China aims for EVs to make up 20% of car sales by 2025, and 50% by 2035. Tesla's success this year has also fueled investor appetite for the technology. Investors should be aware though that most Chinese upstarts are unprofitable, The Wall Street Journal reported, and they are also selling far fewer vehicles than major automobile groups.

Tesla’s success in attracting capital has set off a global gold rush in copycats seeking to cash in on investor demand for renewable investments. Anything that has a battery in the description is doing well and a lack of income was not seen as a barrier to entry when discount rates are zero and the world is swimming in cash. 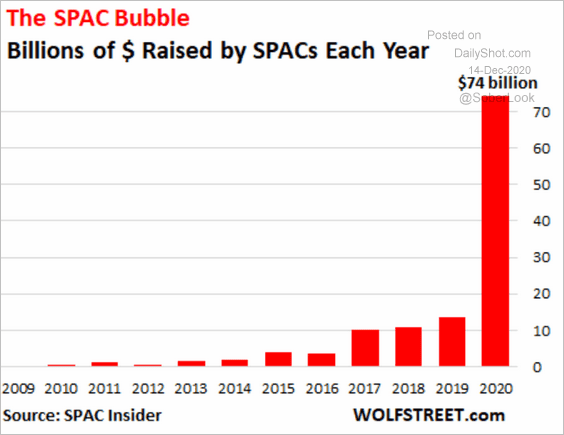 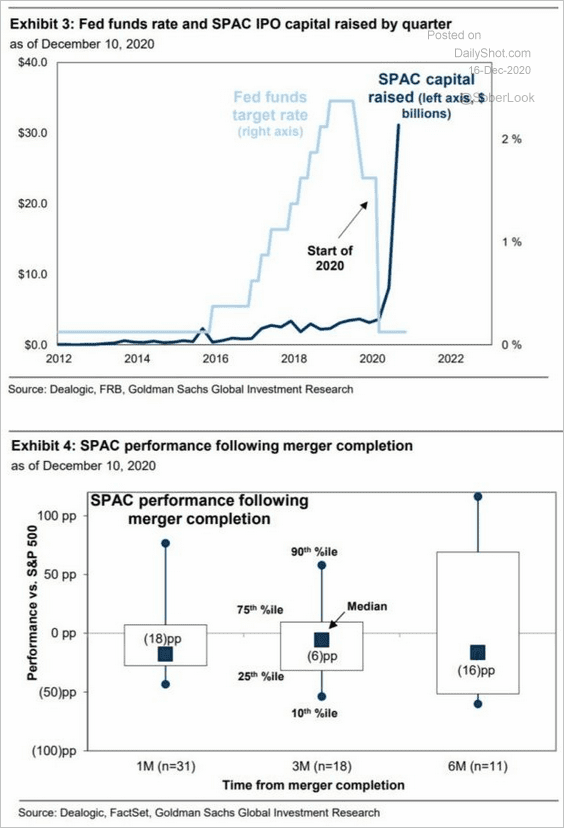 The evolution of the SPAC market has been a gateway for a pace of IPOs to rival that of the late 1990s. The number in 2020 alone has exceeded the total for all other years combined. The result is new companies have been popping up on the stock market at a dizzying pace. Advice to pursue growth at all costs, capture market share and not to worry about profits carry heavy reminiscences of the tech bubble in the late 1990s. 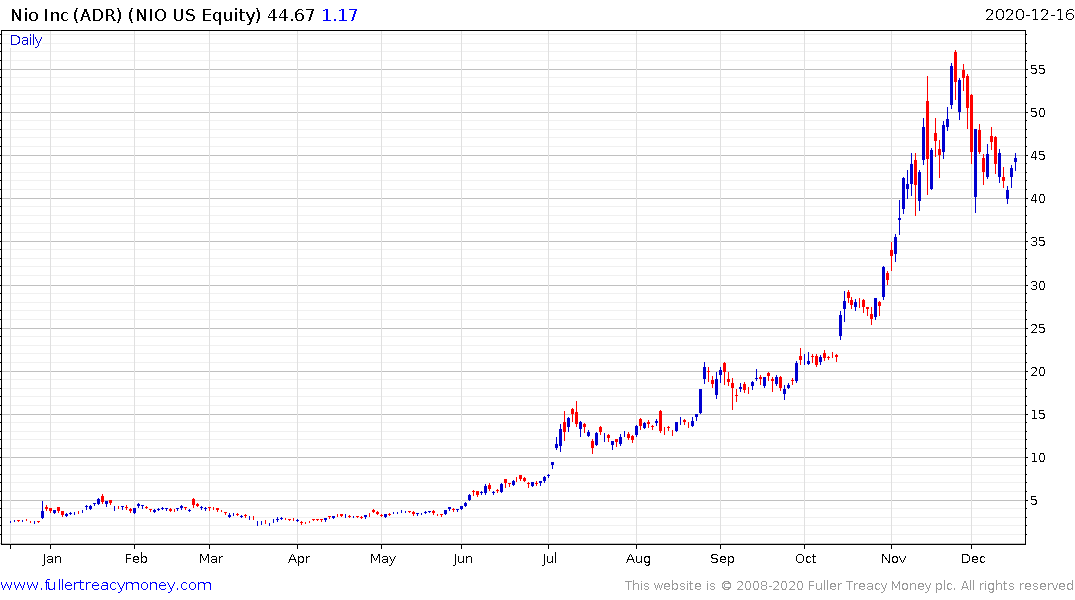 Nio accelerated to its peak in November and at least some consolidation of gains is now underway. 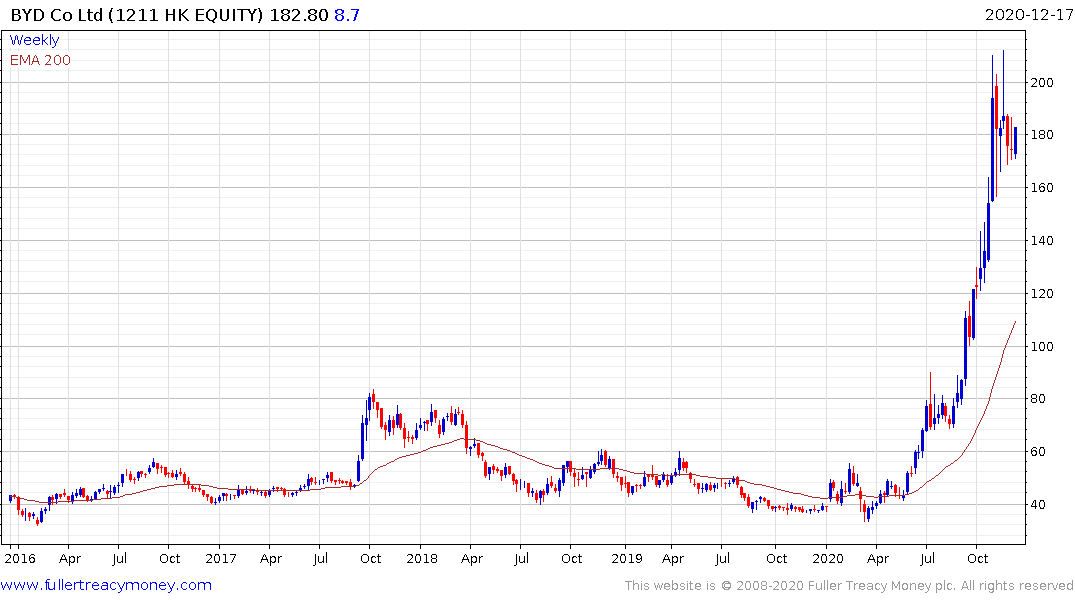 Xpeng appears to have topped and is now unwinding its advance. 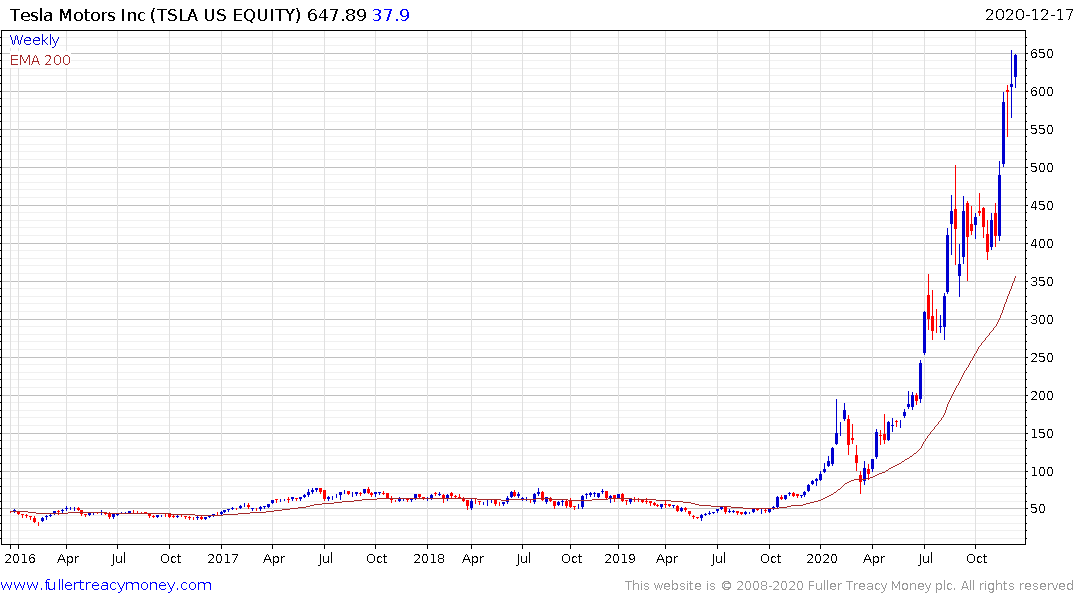 Tesla remains very firm and is back testing its peak ahead of its entry to the S&P500. The true test of that strength will be how well it holds its gain after it is added to the Index. 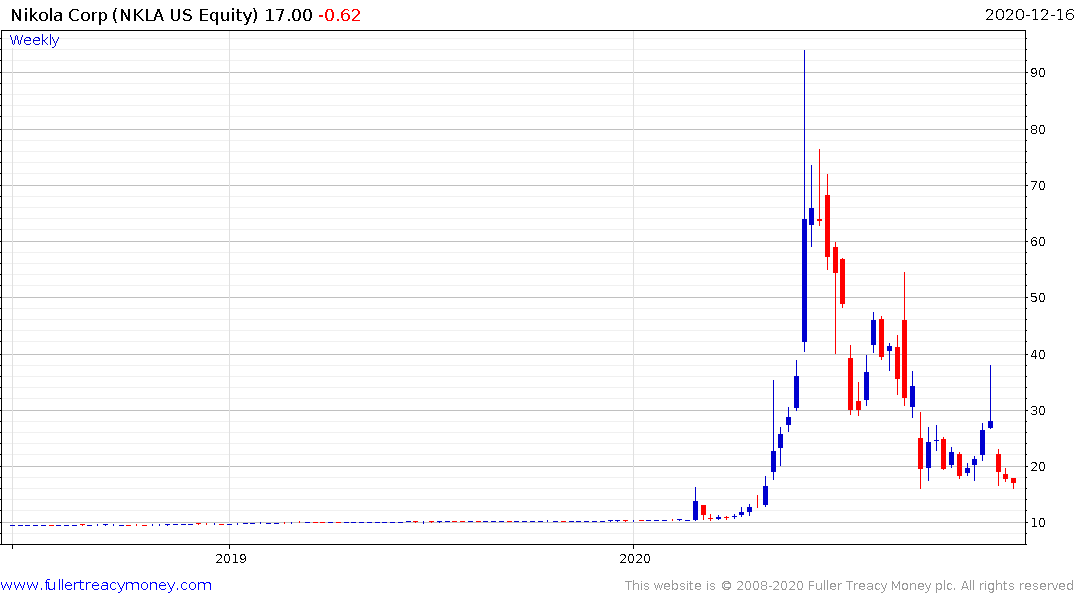 Nikola has given up all of its advance as companies like General Motors withdraw support amid questions about the veracity of numbers on its balance sheet.

Lordstown has been subject to very choppy trading following its initial surge.

Fisker has been largely rangebound since its debt following the SPAC acquisition. It is currently firming in the region of the trend mean.

The performance of the above shares suggests some rationalisation of the sector is underway, where at least some attention will be paid to the potential for future earnings being realisable.

Then we have the question of Toyota’s solid-state battery. The company has been planning to debut a concept car at the Tokyo Olympics this year. That plan was put on hold but back in July they had not yet solved the issue of longevity for their batteries. In fact, last July they did not expect to have a vehicle ready for sale until 2025. Last week, they said it would be ready in 2021.

The four factors required for the perfect transportation ready battery are energy density, charging speed, safety and longevity. Solid state batteries have tended be tick the first three boxes but have not tended to last very long. The big question therefore is whether Toyota has solved the problem in the last six months or is it jumping on the speculative bandwagon? This video from the Torque News YouTube channel carries more information about the claims being made. 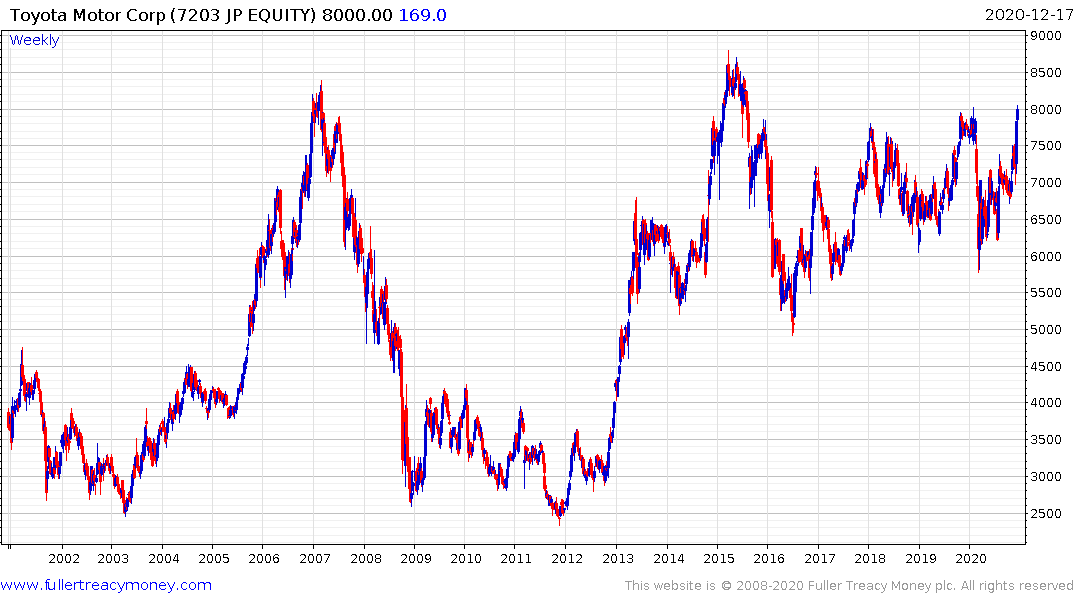 The share’s performance suggests the market is warming up, both to Japan and Toyota. It is now testing the upper side of a 13-year base formation. The share has the added benefit of a reasonable valuation and steady dividend policy. That’s not something any of the upstart car companies can lay claim to.