There is nothing in the financial markets that can’t be made better with leverage. That’s the foundation most trading operations are based on. One of the most common trade patterns is to source cheap funding in a currency which is depreciating in value. That way when it comes to paying back the loan, you get to keep the profit on the currency trade as well as any gain from the assets you invested in.

Japan’s zero interest rates made it an ideal candidate for carry trades but the propensity for the Yen to strengthen meant that short yen carry trades tended to be rather volatile. It was common in the decade up to the introduction of Abenomics in early 2012 for unwinding of carry trades to contribute to profit taking across global markets.

As interest rates have trended towards zero across the world the opportunity to access cheap funding in a wide array of currencies has never been greater. The challenge today is to find the currency most likely to decline versus assets with high growth and yield potential. 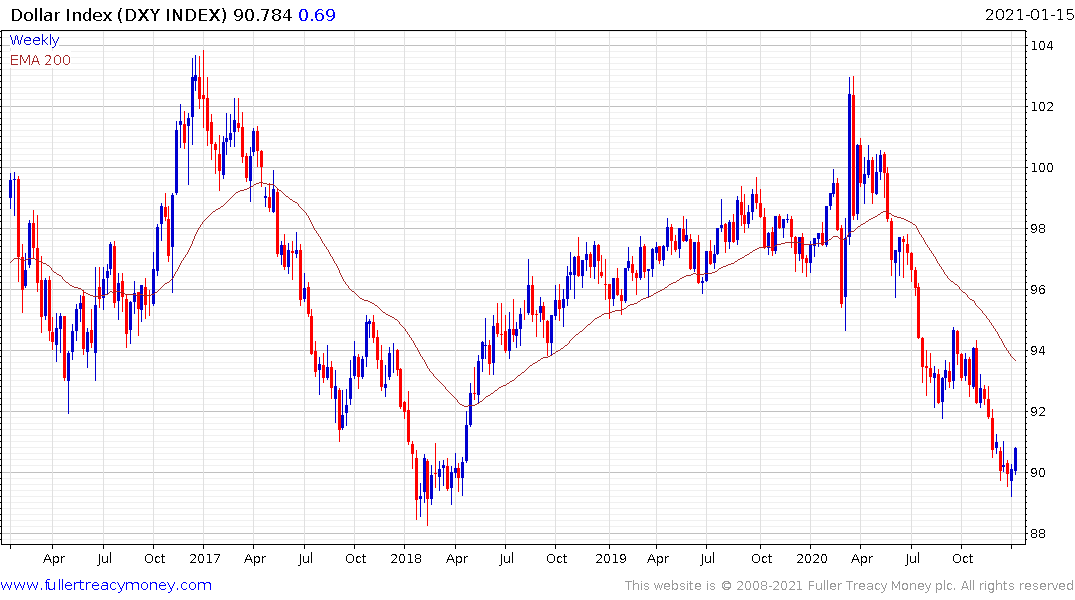 Since March the weakest major currency has been the US Dollar. The massive supply surge, decline in interest rates and rebound in all manner of risk assets has favoured leveraged carry trades. The newfound ability of European, Japanese and emerging markets to rally despite the relative strength of their domestic currencies implies the existence of short dollar carry.

As we head into the MLK US holiday weekend, there is some evidence of profit taking on leveraged trades. The Dollar has strengthened somewhat and stock markets are weaker. These are little more than small moves amid repositioning heading into the weekend.

Nevertheless, the unwinding of carry trades has the same potential to create volatility today as it did over the last twenty years. If the Dollar further unwinds its overextension relative to the trend mean, it could lead to profit taking in the most overextended uptrends.

I remain of the view that the Dollar is in a medium-term downtrend. However, it is quite normal to see countertrend rallies following short-term oversold conditions. At present the short Dollar hypothesis is very pervasive which suggests a lot of traders are already short. With the downtrend having lost momentum, many will have introduced stops.

The pause on Wall Street where there the major indices have moved very little in the last month contrasts with the feverish pace of trading in green energy, small cap and micro-cap names. This article from Bloomberg focusing on volatility traders may be of interest. Here is a section:

A $200 billion breed of systematic investor that helped fuel last year’s market mayhem is now a whisker away from “maximum allocation” to stocks in the latest sign of Wall Street euphoria.

According to Goldman Sachs Group Inc., volatility-targeting quants who buy and sell subject to how much equity prices swing around are all but fully invested in the record-breaking rally.

One of the most widely accepted bullish arguments is the massive sums in money market funds represent significant additional fuel for a further rally. That is in all likelihood true but begs the question what are people waiting for? Most investors prefer to buy the dip so they have some margin of safety. That suggests we are unlikely to have more than a reversion towards the mean. 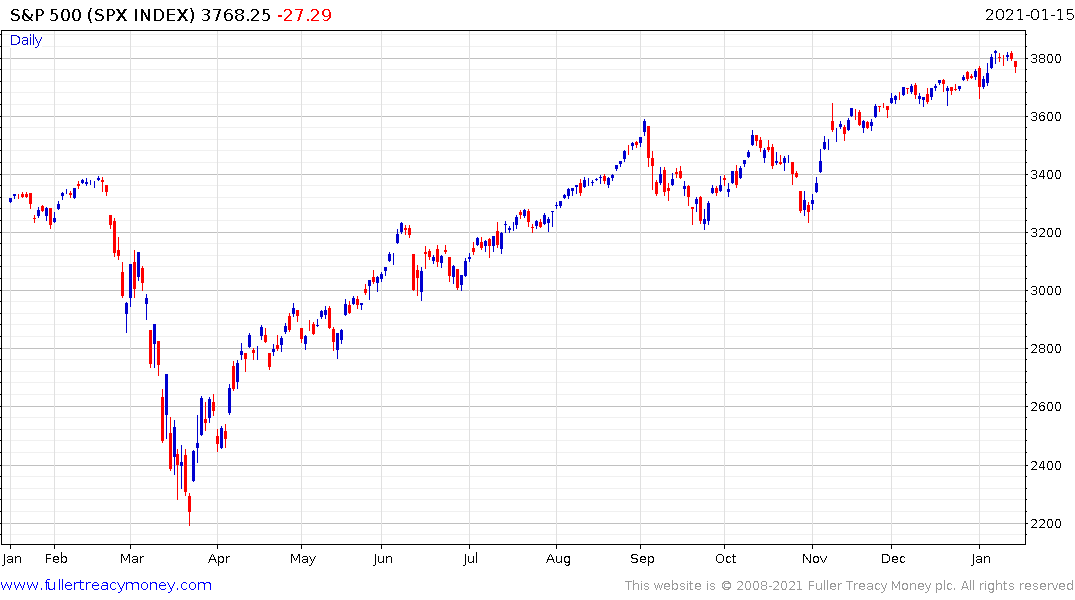 There is clear evidence of a wedge forming over the last few months and suggests the S&P500 is also susceptible to a reversion towards the mean. The Fed is probably waiting for some evidence the market is responding to higher Treasury yields and is unlikely to provide additional assistance until it has confirmation of where the pressure points are.

So far this is just a cautionary note because we have little evidence of profit taking. The VIX Index also has a wedging characteristic with a sequence of lower highs but mildly rising lows.

I received this email from a subscriber today.

You've been flagging Bitcoin this last couple of weeks as the canary in the coal mine. It is notably down 12% today at the time of writing. If it does capsize, do you see the whole market being dragged down with it, or is it going to be a case of the high fliers only, such as EV and Green Tech/Energy that have seen astronomical returns? In short, where is one likely to be most exposed? 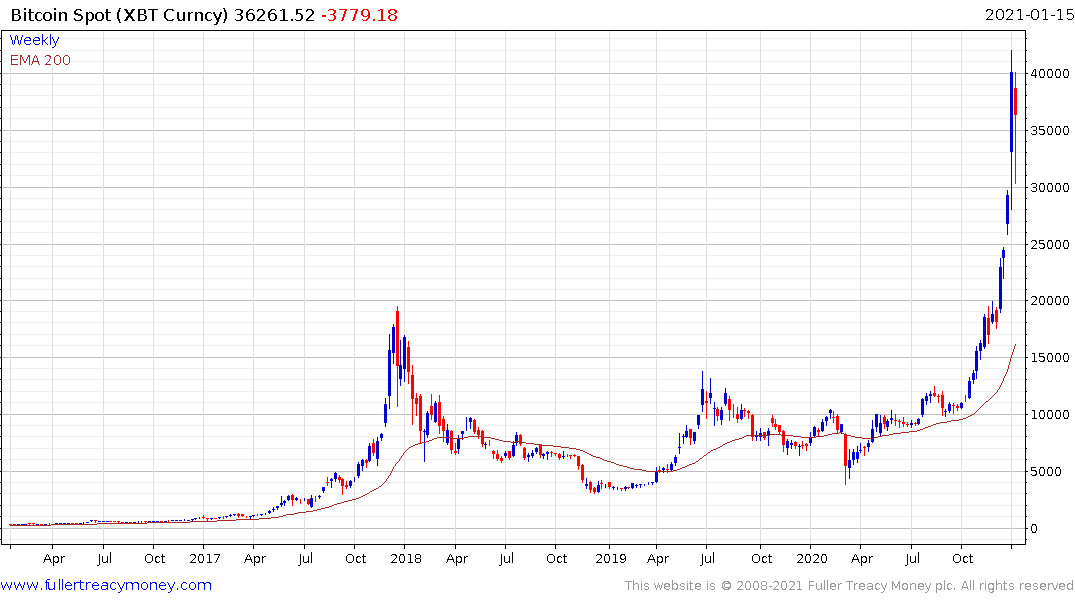 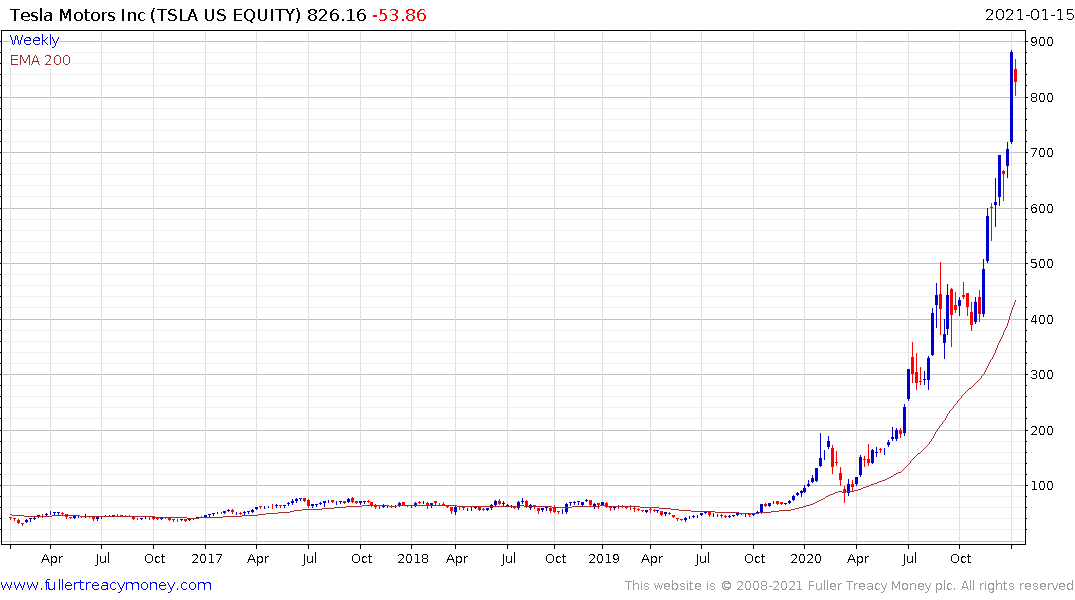 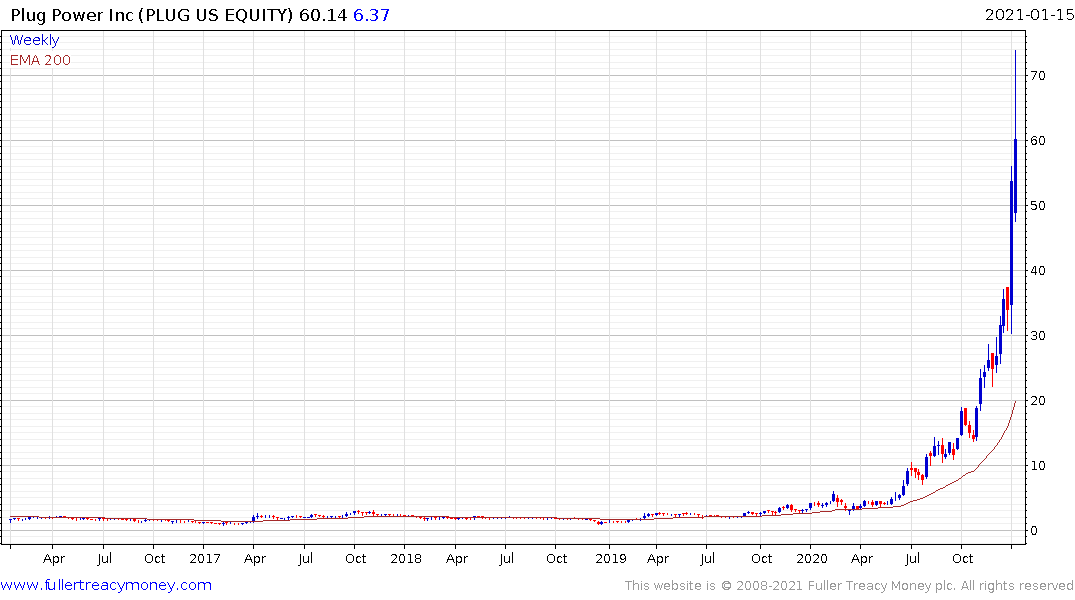 Bitcoin has been the most publicized asset which has benefitted from speculative flows. Tesla’s advance has also been remarkable. Plug Power’s recent surge has outpaced the gain in both. Acceleration is a trend ending and at least some consolidation is looking likely.

It is reasonable to assume these lightning rods for speculation will be among the first to roll over if we move into a corrective phase. Peak to trough swings of 20% have been “normal” in bitcoin since March 2020. The reaction was 27% on a high to low basis. It also dipped back into the underlying range. These are inconsistencies. The $30,000 level needs to hold if the uptrend is to be given the benefit of the doubt.

I want to be clear. I don’t see this short-term risk of reversion towards the mean as the end of this bull market. Financial conditions are still very loose. Interest rates are very low and governments have no plan for shrinking their deficits. That suggests the emerging mania has further to go on the upside.

This report from Morgan Stanley continues to highlight the scope for a swift economic revival as vaccines are rolled out and pent up demand fuels economic activity. I have a lot of sympathy with that view but liquidity expectations are a more important short-term consideration.