“The likely increase of Iranian oil production could not have come at a more unfavorable point in time, with the oil market being oversupplied and renewed economic concerns,”

Giovanni Staunovo, an analyst at UBS Group AG in Zurich, said in a report. “It is not worth holding a direct exposure to crude oil at present, before more clarity sets in.”

Brent capped a third annual loss in 2015 as the Organization of Petroleum Exporting Countries effectively abandoned output limits. Iran, which was OPEC’s second-biggest producer before sanctions were intensified in 2012, is trying to regain its lost market share and doesn’t intend to pressure prices, officials from its petroleum ministry and national oil company said this month.

Iran has been stockpiling crude ahead of anticipated end of sanctions and this has been a factor in the swift decline of prices over the last month. If we put some numbers on that, it is now January 18th and Brent Crude has fallen 40% from peak to trough so far this year. That’s an accelerating downtrend by any definition one might choose to use.

Iran’s newfound unrestricted ability to sell oil is a potential bonus for the oil services sector since it is going to have to spend billions on upgrading infrastructure atrophied by sanctions. However let’s not also forget that Iran has been selling oil to China for more than a decade and that aside from what it has in storage for sale, the country’s ability to rapidly increase supply is relatively low. 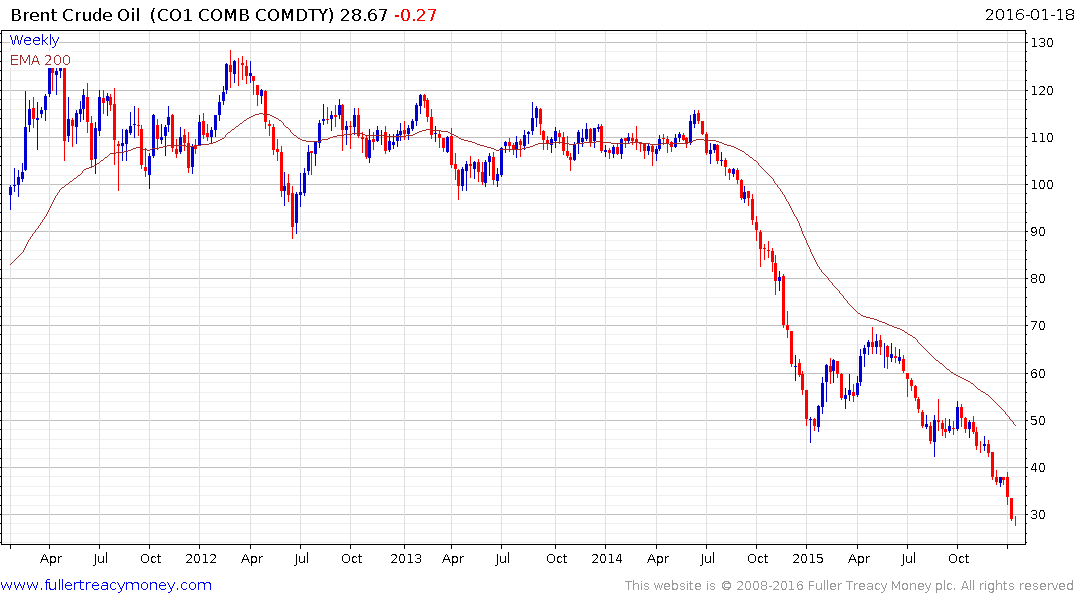 There is a glut of oil on the global market and the USA is potentially a more influential new exporter than Iran at least in the short term. That suggests some supply will need to be shut in for the contango on oil markets to narrow. 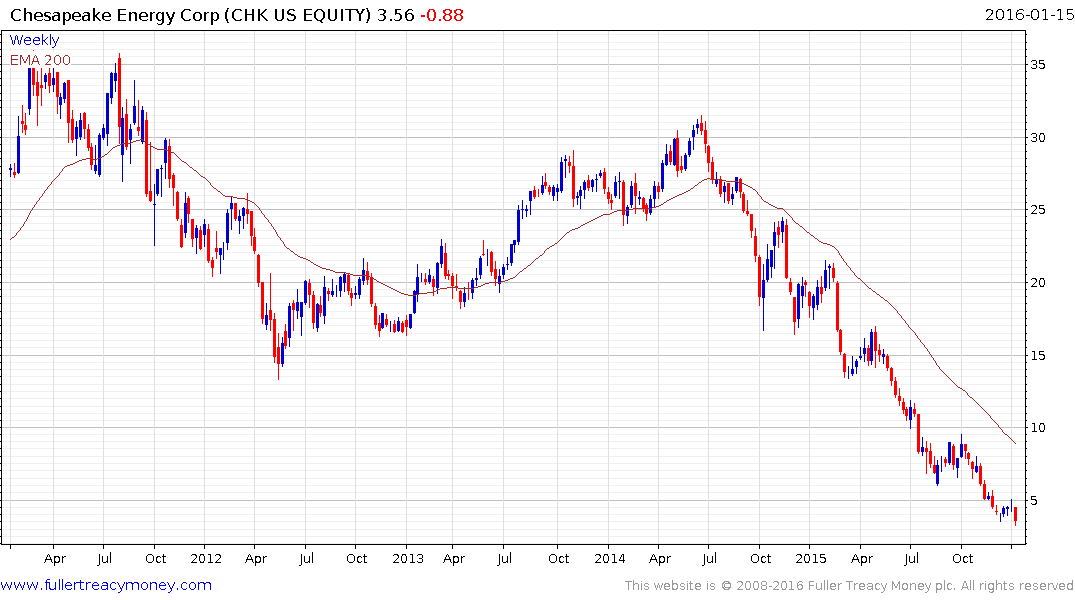 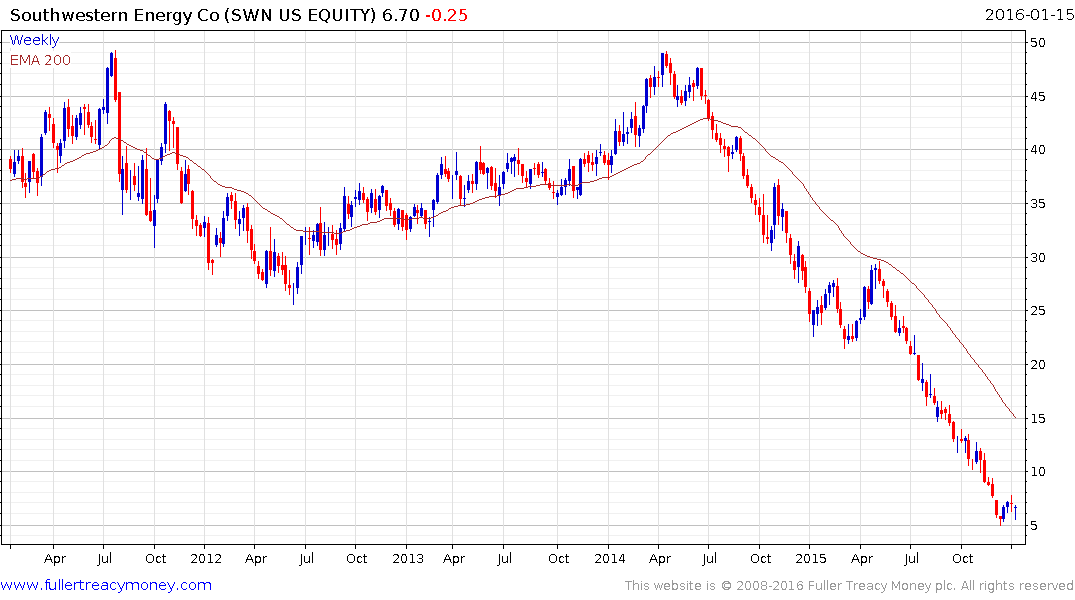 With that in mind it is worth highlighting that despite the accelerating trend in oil prices some of the most heavily leveraged explorers have at least paused over the last two weeks. Both Southwestern Energy and Chesapeake have not moved to new lows suggesting at least someone is buying to support prices at what are depressed levels. 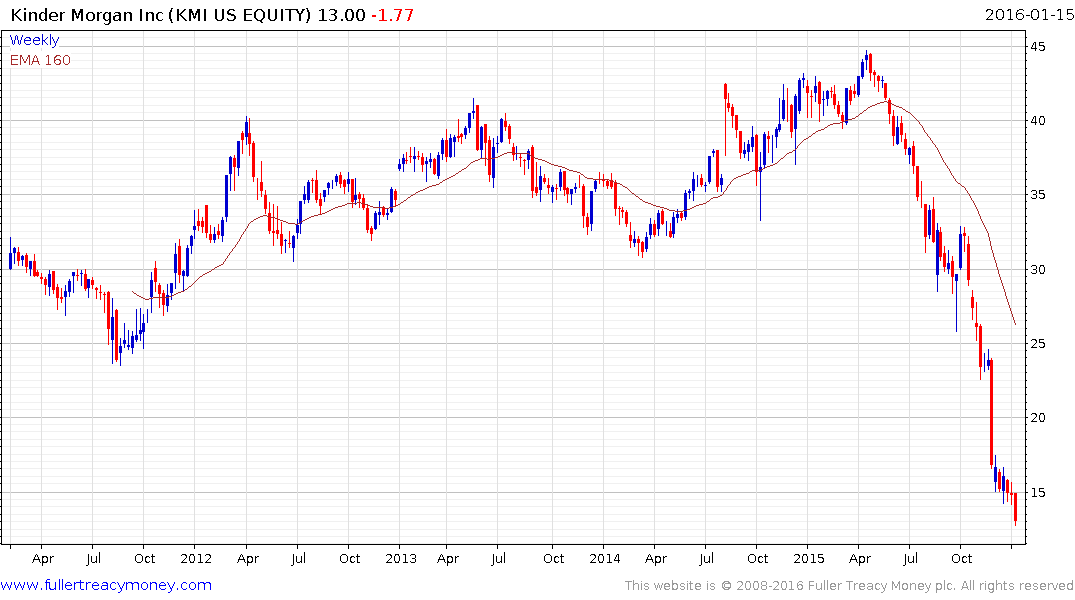 Meanwhile Kinder Morgan announced a 75% cut to its dividend in October which it said was aimed at ensuring it would not have to go to the market to raise additional capital. Following a two-week bounce prices resumed their decline, more than halved, and now yield 15%. It will pay its reduced dividend on the 20th and we may get some additional news on what the company’s plans are. Anything but the worst possible outcome should result in at least a bounce.

Many pipeline businesses are highly leveraged because of the cost of building the infrastructure but many participants in the MLP sector are also highly leveraged because of the attractive regular dividends on offer. This cocktail of gearing has conspired accelerate the downtrend and yet regardless of whether companies go bust the resources will still be extracted and brought to market. The energy sector will still need pipelines. 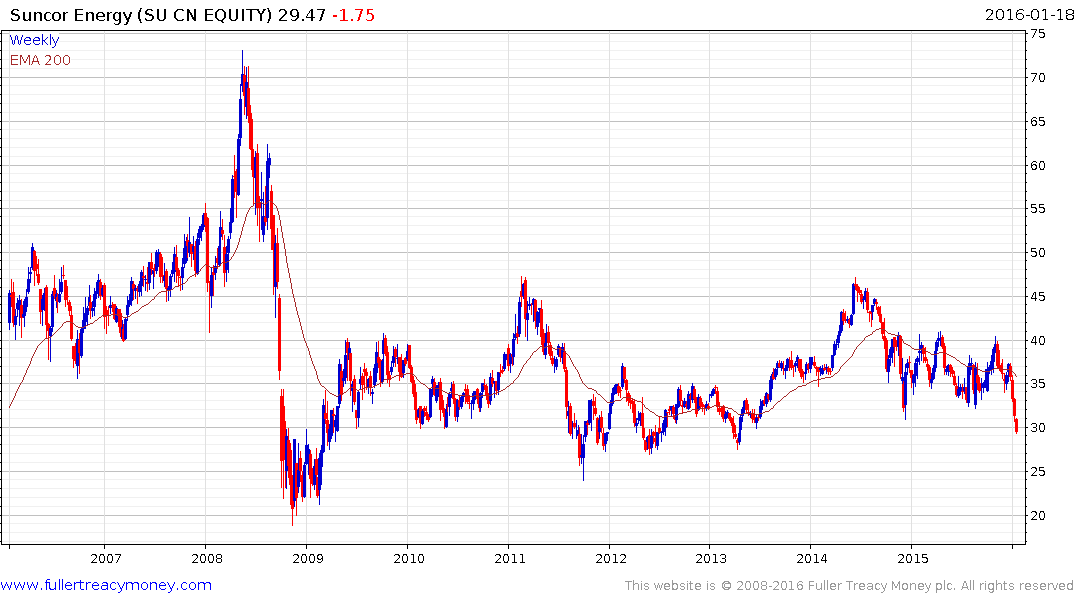 Suncor has successfully acquired Canadian Oil Sands and will probably need some time to fully recognise the synergies but is likely to be a forerunner for additional mergers in the sector.

This a very taut environment and emotions are running high. What we know for sure is that Brent Crude is not going to zero and therefore value is rapidly returning to this sector. Rather than focus on short-term considerations, this is perhaps a more relevant time to consider the outlook for oil companies should prices range in a volatile manner with the bottom of that range probably reached sometime in the next month.