Both the global benchmark and its U.S. counterpart have rallied in October amid increasing belief that the Organization of Petroleum Exporting Countries will agree to cut output later into next year, helping to work down global inventories. Statoil ASA’s Chief Executive Officer Eldar Saetre said in a Bloomberg Television interview that he continues to see strong demand and the oil market is “definitely balancing.”

“People are starting to price in the OECD inventories moving back towards normalized levels into later 2018,” Brad Hunnewell, senior equity analyst at Rockefeller & Co., said by telephone.

U.S. Army Colonel Ryan Dillon, a spokesman for Operation Inherent Resolve, the U.S.-led coalition against the Islamic State said in a Twitter message Friday that he “incorrectly” said in an interview with Kurdish Rudaw news agency that there was a cease-fire between Iraqi and Kurdish forces. A rally in WTI immediately followed his message. Iraqi Prime Minister Haider Al-Abadi suspended operations by federal forces for 24 hours in disputed areas to allow a joint Iraqi and Kurdish team to deploy forces, Sumaria TV reported.

Synchronised global economic expansion is generally positive for commodity prices. With OPEC at least limiting supply that is helping to support prices. Saudi Arabia also has a vested interest in getting prices as high as possible over the next year as it burnishes the appeal of the Saudi Aramco IPO. 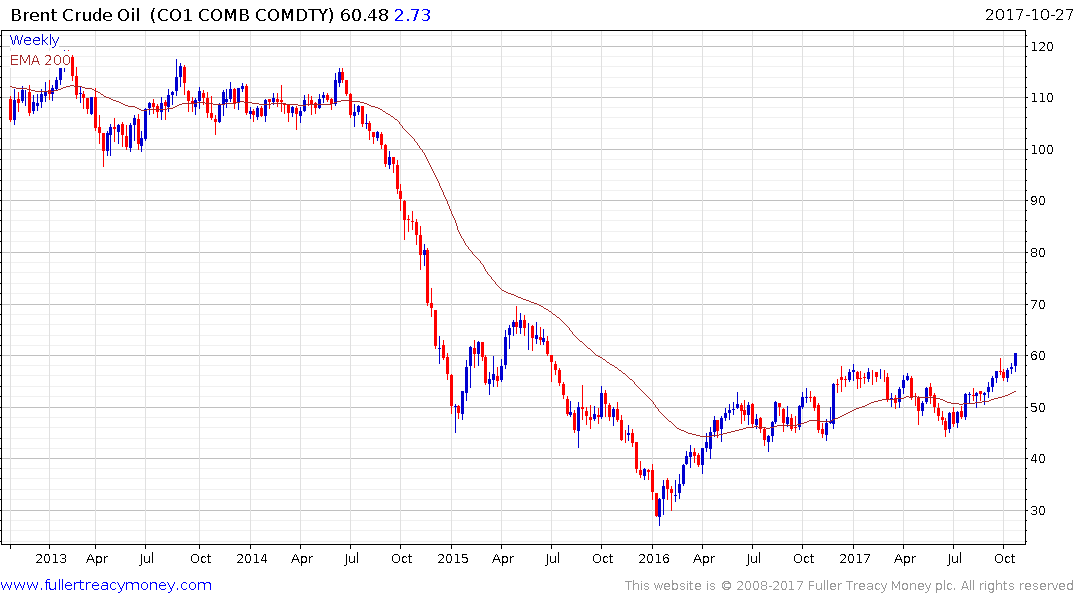 Brent crude cleared the psychological $60 area today to break out of the two-year range. A clear downward dynamic would be required to question medium-term scope for additional upside. Of course, we also know that a great deal of US onshore supply is economic at prices above $60 but will take a few months to bring on line. In the meantime, the benefit of the doubt can be given to the upside. 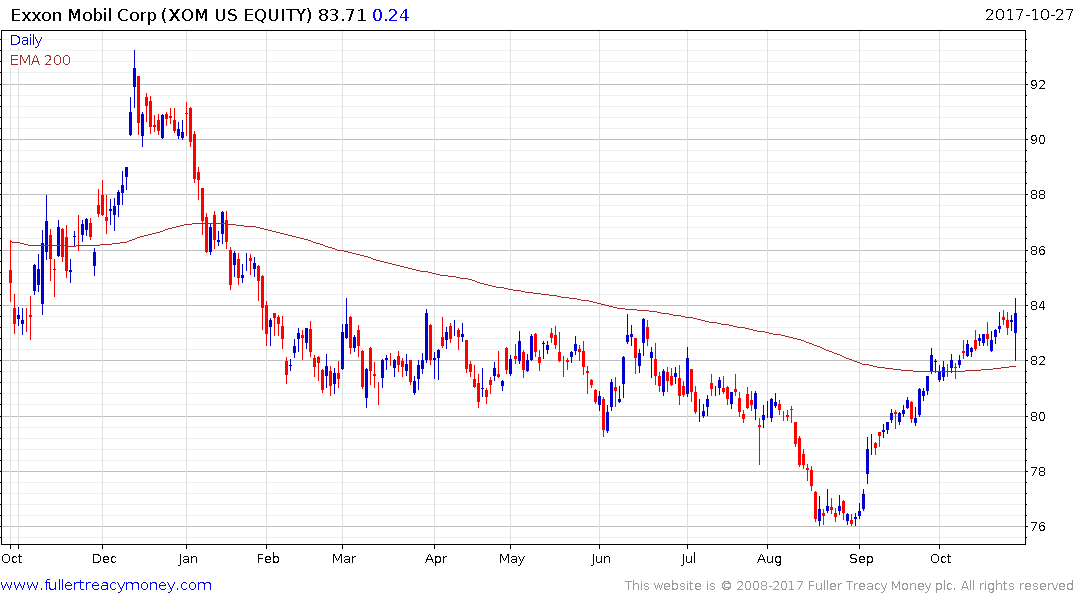 Exxon Mobil reported better earnings but less production today and was subject to intraday volatility as the market weighed its recovery potential. The share continues to test the region of the highs posted between February and June while a sustained move below the trend mean, currently near $81.60 would be required to signal a return to supply dominance. 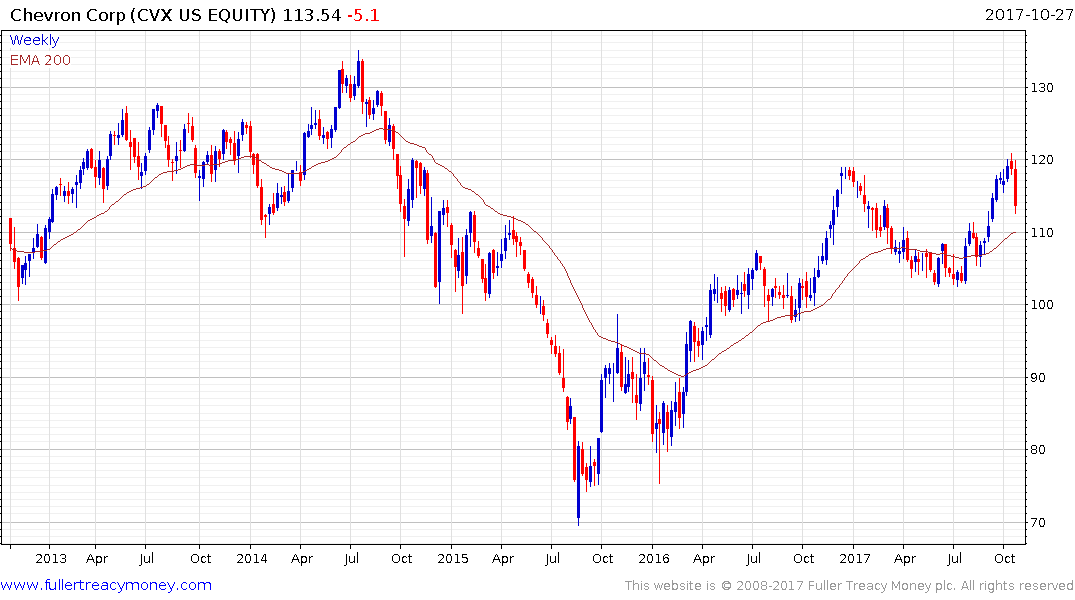 Chevron pulled backs sharply to reaffirm resistance in the region of $120. 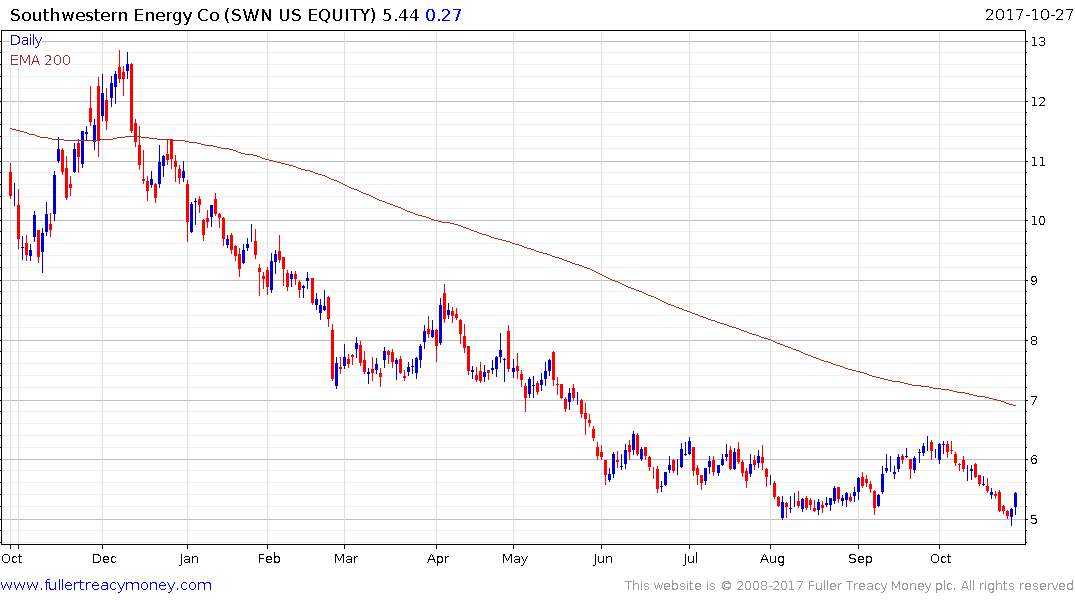 Southwestern Energy, which concentrates on domestic US unconventional supply, posted an upside key reversal yesterday and followed through on the upside today to confirm at least near-term support has been found.