Shares of the world’s biggest maker of electric-vehicle batteries jumped on their trading debut as investors bet on rising demand for new-energy cars worldwide.

Contemporary Amperex Technology Ltd. rose by the maximum 44 percent to 36.20 yuan at 10:17 a.m. in Shenzhen, China, valuing the company at about $12.3 billion. The manufacturer sold a 10 percent stake at 25.14 yuan a share in its initial public offering on May 30.

Investors are confident that CATL, as the company is known, can fend off rivals including Panasonic Corp. and continue to win orders as automakers move toward electric vehicles. CATL, whose customers include Volkswagen AG, had reduced the size of its IPO by more than half compared with its original ambitions because of declining margins and a cap imposed by Chinese authorities on price-earnings ratios in IPOs.

CATL produces more batteries than Tesla and is likely to continue to do so well into the future considering the pace of factory building it has planned. China has every intention of dominating the battery sector both because it is the largest auto market but also because it has a clear aim to become globally competitive in auto exporting. Additionally, as an energy importer it has a clear reason to reduce imports of oil if at all possible. That suggests China will be investing heavily in batteries for the foreseeable future. 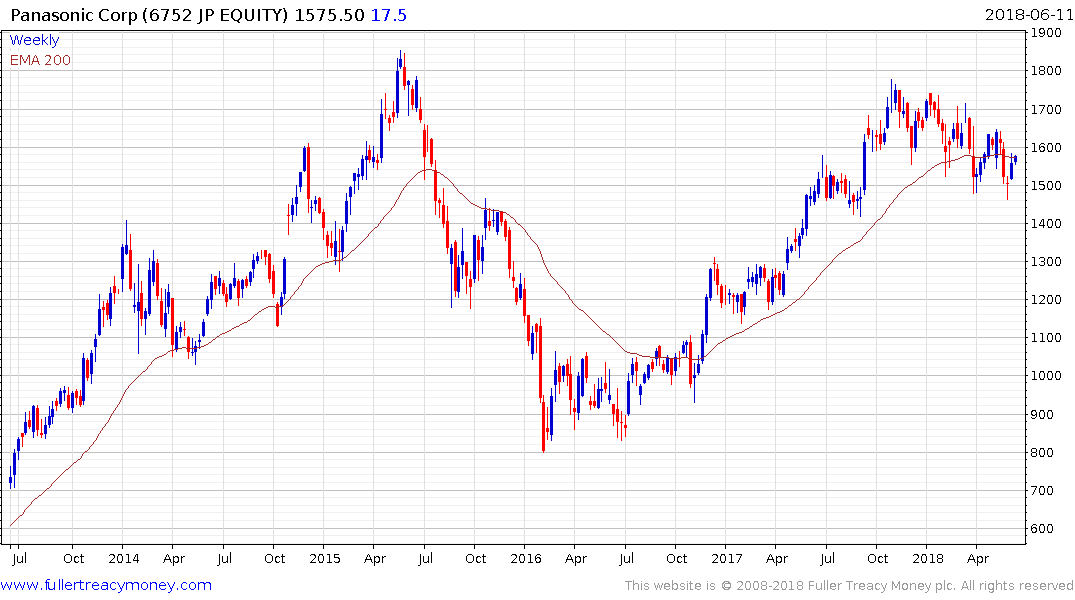 Panasonic has already delivered 8:1:1 ratio batteries to Tesla and they are in the Model 3 today. That is a massive acceleration in the pace of technology delivery compared to a year ago. Panasonic 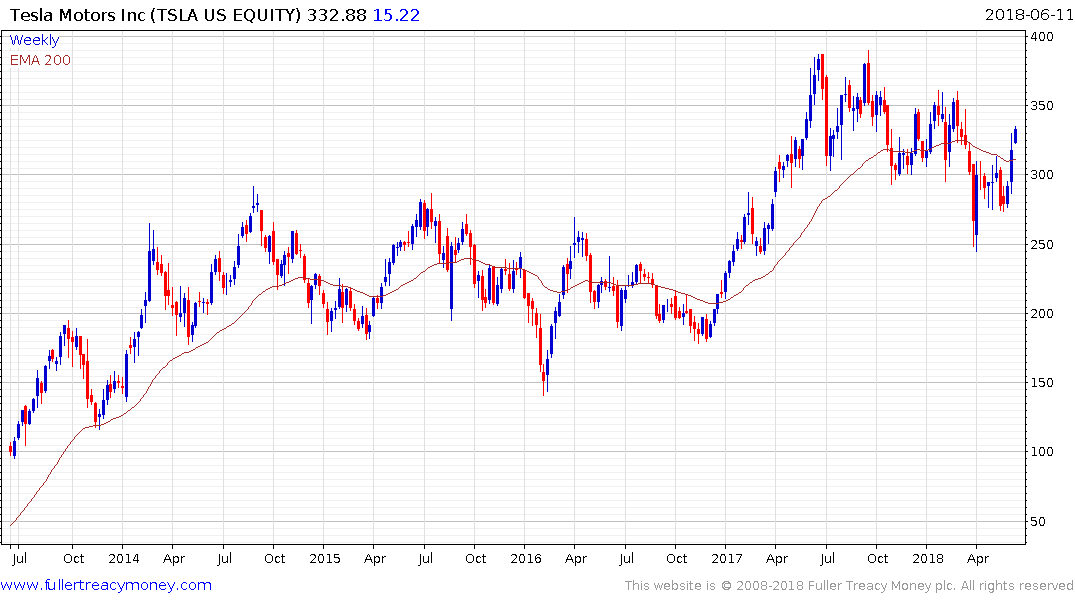 Tesla closed back above $300 last week and improved on that performance this week as it has reiterated its intention to meet the 5000 units a week timetable it originally set for the Model 3. A sustained move back above the $350 level would signal a return to demand dominance beyond short-term steadying. 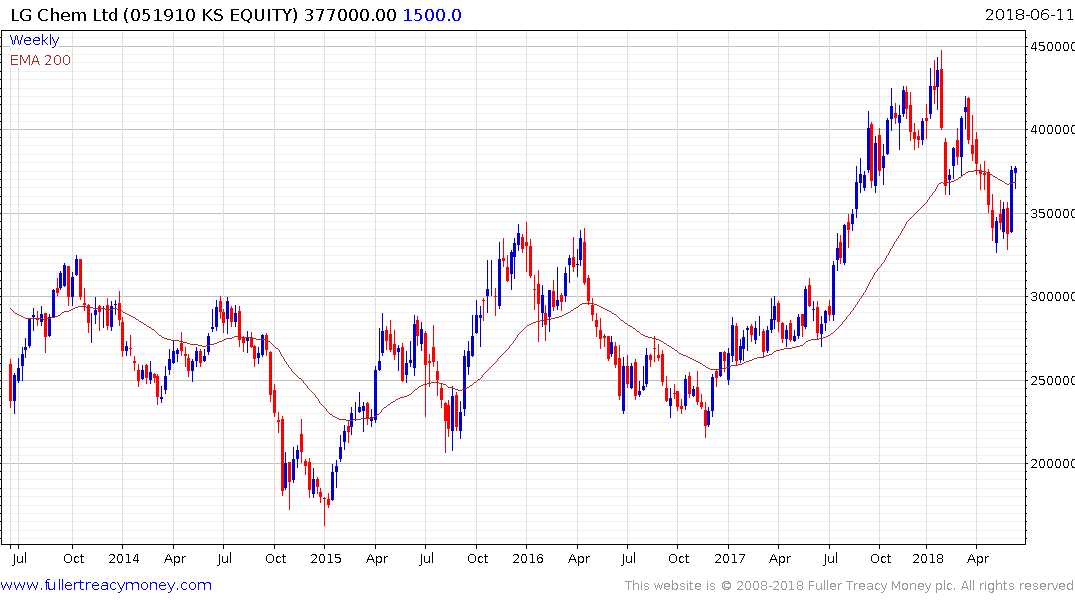 LG Chem is currently firming from the region of the upper side of the underlying base formation. 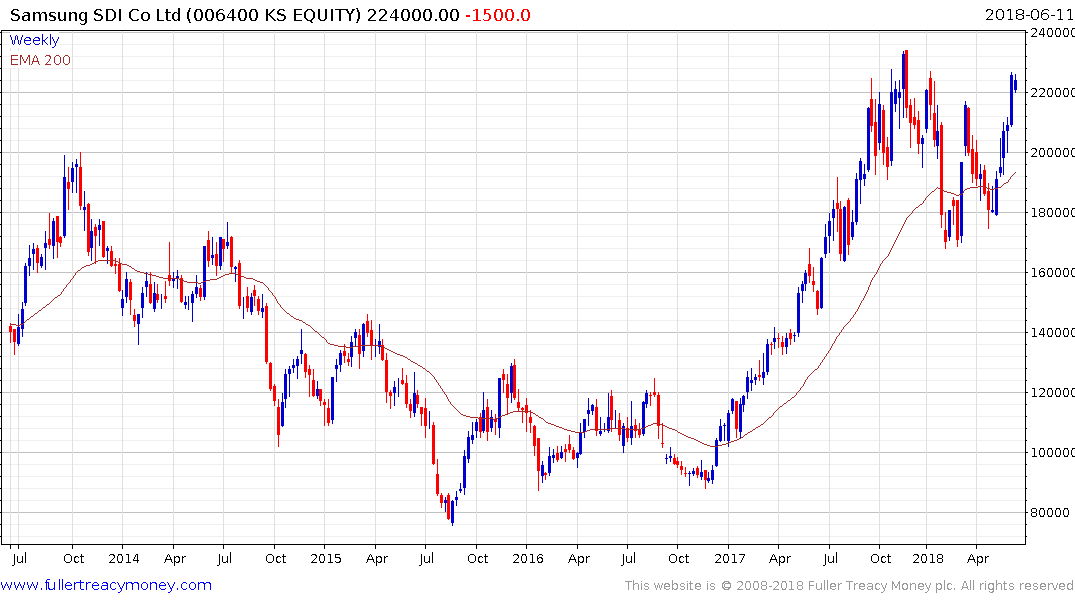 Samsung SDI has rallied impressively over the last two months and is back testing its peak near KRW225,000.