The data’s strength was surprising because the period spanned Melbourne’s shift to Stage 4 restrictions and a curfew to contain a rapidly spreading outbreak, as well as nervousness in neighboring New South Wales that it was headed down the same path. The labor market’s ability to absorb this weakness and maintain its recovery is testament to the government’s signature JobKeeper employment subsidy -- that will extend into 2021 -- and central bank stimulus.

Self-employed workers drove the monthly jobs increase. As part-time jobs returned at twice the pace of full-time, the ubiquitous food delivery services, with its riders pedaling the streets of Australia’s cities, are expected to be responsible for much of this rise.

“The upshot is that the unemployment rate is now unlikely to climb to 8.5% over the coming months as we had anticipated, let alone the 10% predicted by the RBA and the Treasury,” said Marcel Thieliant, senior economist for Australia at Capital Economics. “Indeed, with restrictions in Victoria set to be loosened toward year-end, employment should continue to rise.”

The Reserve Bank of Australia, which has kept its benchmark interest rate near zero since March, when it began buying government bonds to ensure the yield on three-year remained around 0.25%, had predicted the jobless rate would climb to around 10% later this year.

Australia has successfully contained the coronavirus outbreak in Melbourne but the whole economy benefits from the monetary and fiscal stimulus to aid Victoria. With the RBA’s cash target rate at 0.25% Australia’s higher growth sectors that can benefit from access to abundant liquidity should continue to prosper. 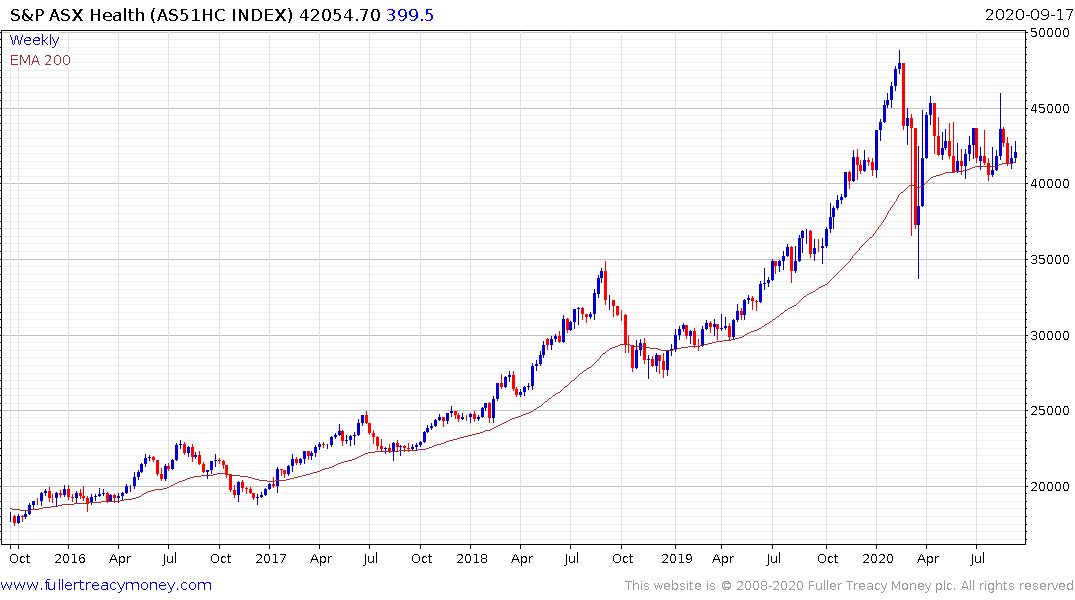 The healthcare sector has been consolidating for the last few months in the region of the 200-day MA. A sustained move below 40000 would be required to question the consistency of the medium-term uptrend. 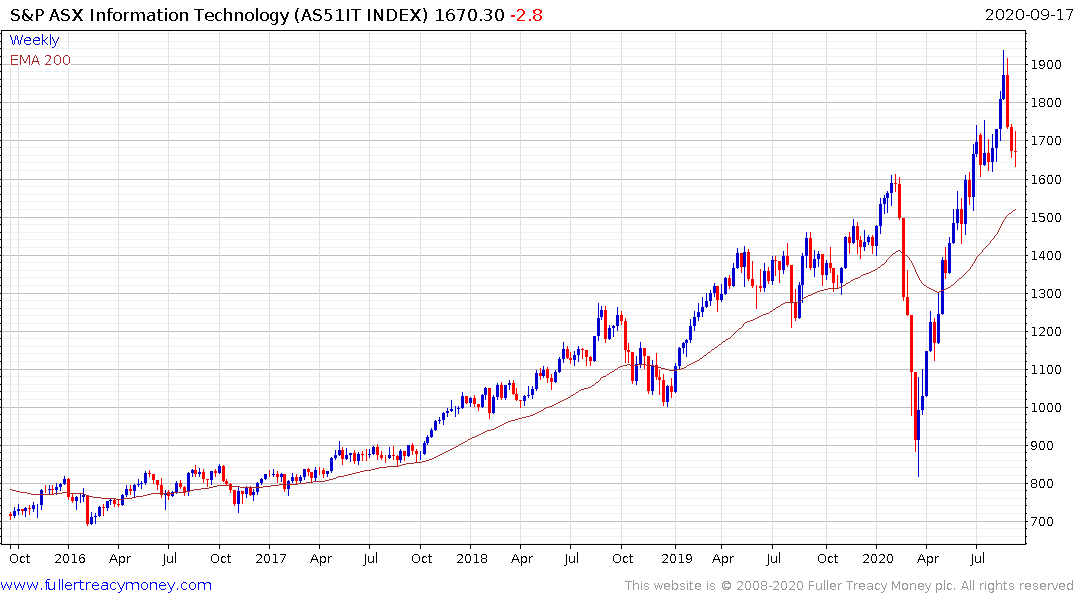 The information technology sector rebounded impressively from the March lows and is now testing potential support in the region of the previous peak. 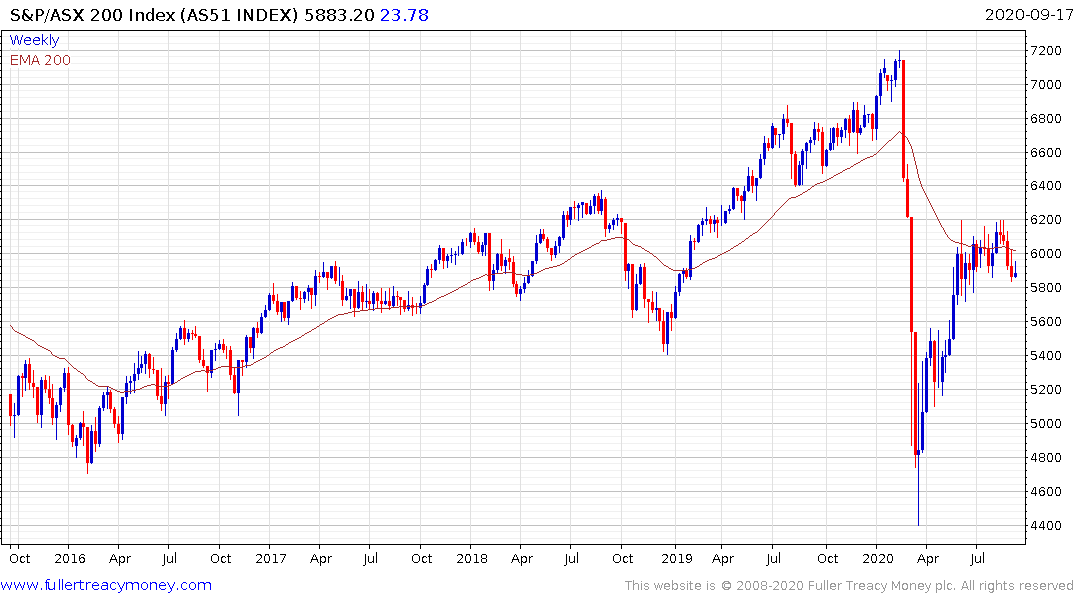 Meanwhile the S&P/ASX 200 continues to range below the 200-day MA and will need to sustain a move above it confirm a return to medium-term demand dominance. 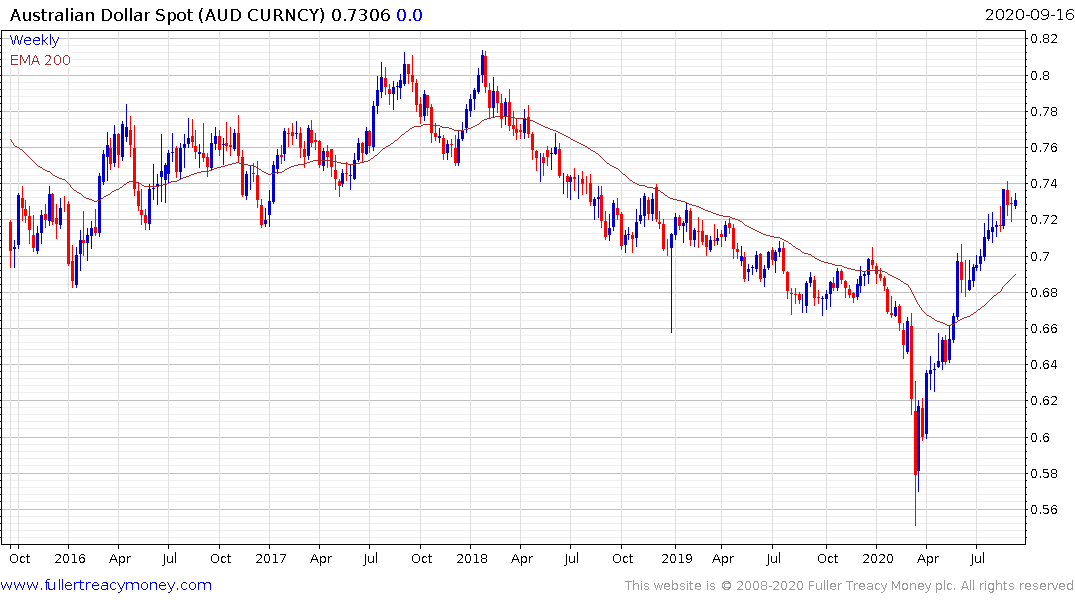 The Australian Dollar has broken its medium-term downtrend. While somewhat overextended in the short-term, a sustained move below the trend mean would be required to question medium-term scope for additional upside.