As Shale Drillers Stumble, Big Oil Says It Can Do Permian Better
Comment of the Day

As Shale Drillers Stumble, Big Oil Says It Can Do Permian Better by Eoin Treacy

Concho Resources Inc., long considered one of the Permian’s premier operators, was forced to scale back activity after drilling almost two dozen wells too closely together. That move by the Midland, Texas-based producer spooked investors across the industry, with Evercore ISI predicting the “carnage” would have a lasting impact.

Concho’s problem with well spacing highlights the challenges of fracking so-called child wells: Too close to the “parent,” and output is less prolific; too far apart, and companies risk leaving oil in the ground.
​
Exxon and Chevron say they aren’t as exposed to those problems. Because of their size relative to smaller independent producers, the oil giants are able to lock up acreage, giving them room to be more conservative in their well spacing.

The lower for longer nature of oil pricing over the last few years and probably for the foreseeable future suggests smaller independent oil drillers and producers need to concentrate a lot more on containing costs. That suggests there is scope for consolidation within the Permian where the larger better capitalised companies are likely to have an advantage.

The broad energy sector represents about 16% of all high yield but it is a very cyclical business and therefore carries more volatility than some investors might be comfortable with.

The Barclays High Yield Energy OAS Index broke out of a first step above the base today. That is suggesting some of the more indebted companies are going to have trouble making ends meet at oil prices in the $50s not to mind if the price falls below that level. 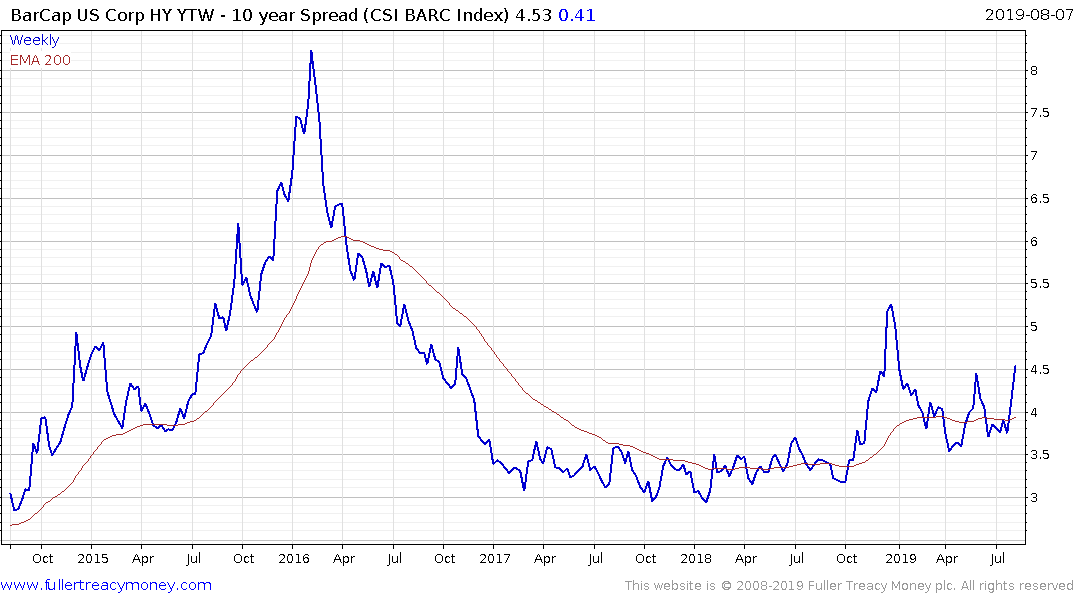 That is putting upward pressure on high yield spreads which firmed noticeably over the last few sessions. The 500-basis points level is a big psychological Rubicon for the market and moves above that level generally signal trouble for the stock market because it suggests stress in the credit markets.