As good as it gets, for now
Comment of the Day

As good as it gets, for now by Eoin Treacy

Our core view has been that commodities are enjoying a supercharged cyclical rebound but not yet embarking on a “super cycle”.

• Specifically, we have been arguing that, precious metal prices peaked in 3Q20, industrial metal prices are peaking in 2Q21 and that crude oil will peak in 3Q21.
• We retain this narrative, on the views that:

Þ Although US interest rates have been held back by recently weak labour supply, strong labour demand should enable the Fed to signal tapering in late Q3/early Q4, bringing the curtain down on gold’s cyclical bull market. A view which was reaffirmed by the June FOMC meeting.
Þ Industrial metals have performed in-line with or above expectations during Q2 but there are already indications that the boom in global goods demand is easing, as the US fiscal impulse fades and consumers begin to substitute back towards services.
Þ Though the level of raw materials demand should remain elevated, with additional support from restocking of depleted finished inventories, we expect global industrial production to ease in 2H21.
Þ Crude, however, benefits from the ongoing recovery in transport demand and the comparatively disciplined return of production, delivering a 2021e deficit of ~1Mbpd.

The beginning of any new bull market creates a wide dispersion of views about future potential. The most important are between the cyclical versus secular camps. Cycle bull markets are powerful but short lived while secular bull markets surprise in their persistence over years.

There is likely to be a lot more dispersion in the commodity complex on this occasion that there was at the beginning of the big bull market that began in the early 2000s. The biggest difference is there is no secular shortage of oil.

Twenty years ago, crude oil had been depressed for decades amid oversupply. Chronic under investment meant that when demand increased, primarily from China, the sector was ill prepared to respond and prices rose for more than a decade.

We are at the other end of the spectrum today. Companies are pulling back from investing, speculative activity is being punished by investors and public opinion is hostile to investments in additional fossil fuel supply. That suggests a new secular bull market in crude oil, which would lead to prices exceeding $140 by a wide margin, is unlikely to occur until OPEC+’s 8 million barrel surplus is fully eroded.

At present crude oil continues to trend higher but is in the region of previous highs over the last few years. That suggest some risk of resistance between current levels and $80. 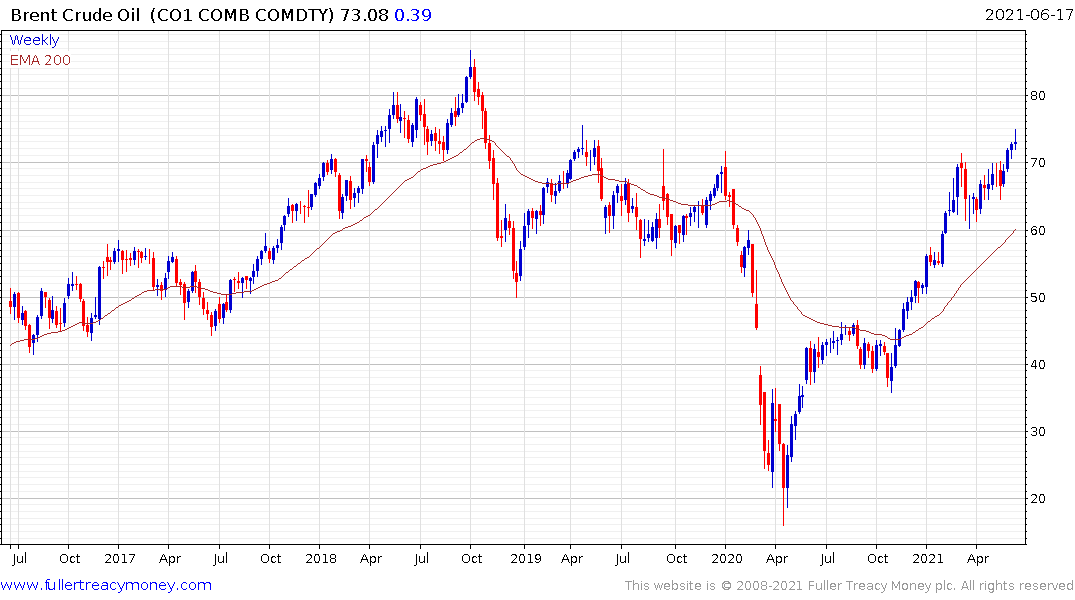 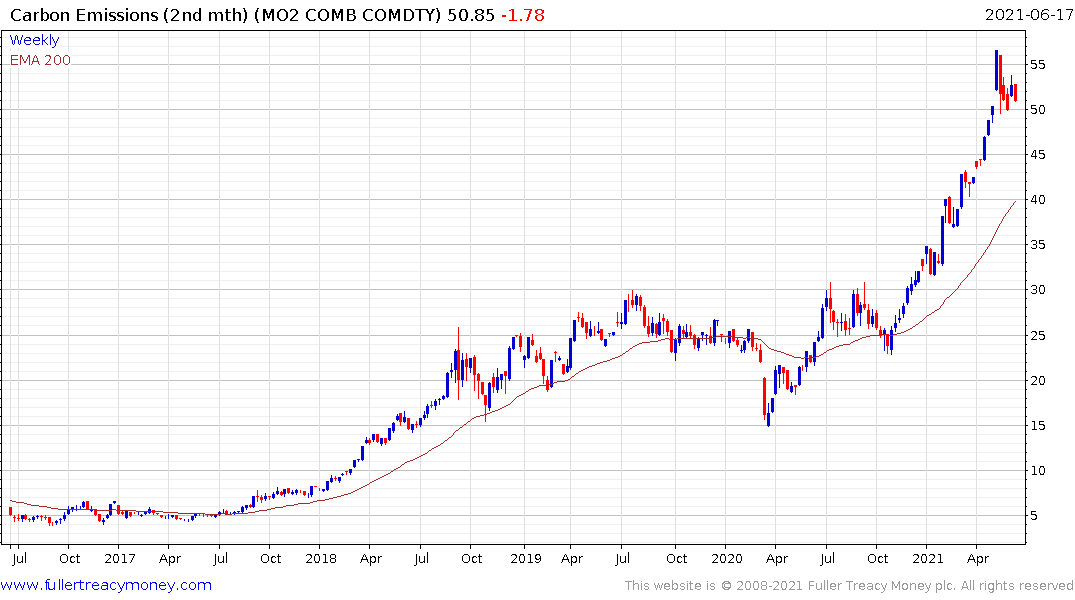 Here is a section from a report from the IEA on the carbon intensity of various fuels:

This section from an article by cleanenergywire.org may also be of interest. It focuses on the increased costs to German consumers from the carbon tax.

Combining this data suggests clear cost increases to the most carbon intensive fuels which are used in electricity generation. This trend is most pronounced in Europe but it is gaining traction everywhere.

For reference, I just looked at my energy bill which guarantees 9.4cents per megawatt hour with free weekend electricity. A carbon tax would represent an additional cost of around 60% in the first year.

Let’s return to the cyclical versus secular bull market hypothesis. We’ve had a substantial run-up in prices and a consolidation of that move is now underway. Speculation is increasing that the economic revival may not be as quick as initially anticipated, so that would imply less demand for commodities. 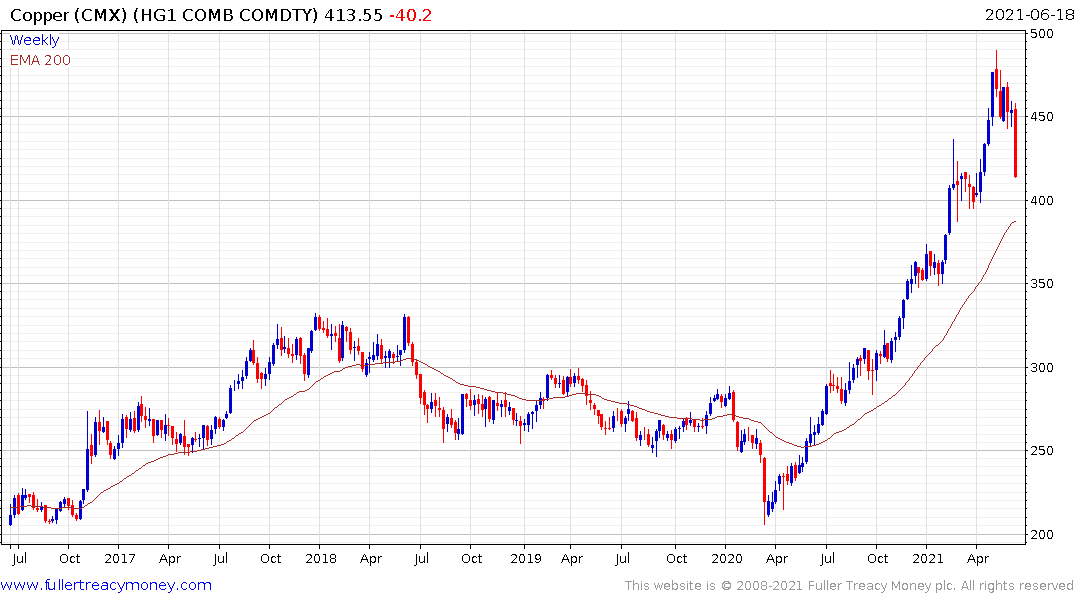 The secular theme assume utilities can only cope with higher carbon costs by diversifying. That means a lot more wind turbines and solar panels. Automakers have given up on developing new internal combustion engines and will have a lot more demand for copper as a result. The secular theme is concentrated on copper demand so a significant pull back can be viewed as an entry opportunity.