Saudi Aramco faces weeks or months before the majority of supply from the giant Abqaiq plant is restored after this weekend’s devastating aerial attack, according to people familiar with matter.

Aramco is still assessing the state of the plant and the scope of repairs, but the state oil company currently believes less than half of the the plant’s capacity can be restored quickly, the people said, asking not to be identified before an official announcement. It’s a more pessimistic outlook than Aramco had immediately after the incident, they said.

All eyes are on how fast the kingdom can recover from the weekend’s devastating strike, which knocked out roughly 5% of global supply and triggered a record surge in oil prices. The loss of Abqaiq, which handles 5.7 million barrels of oil a day, or about half of Saudi production, is the single worst sudden disruption to the oil market.

Aramco, the world’s largest exporter, is currently supplying customers from its stockpiles, but is asking some buyers to accept different grades. President Trump has said he’s ready to release oil from the U.S. Strategic Petroleum Reserve to ensure ample supply.

Saudi Arabia is also starting idle offshore fields to replace some of the lost production.

Let’s lay out the questions. The first is just how much geopolitical risk is present and has that been under appreciated by markets? The second is the Khurais field is  about equidistant from the border with Iraq and Yemen so how did these drones penetrate air space without being intercepted. The third is what is likely to do well as a result of these events?

The majority of media commentary has focused on the trade war but the threat of Iranian mischief making has been rising over the last few months. The attack on oil tankers in the Persian Gulf over the summer and the shooting down of a US drone are now being viewed in a fresh context. This article from Haaretz covering the details of a drone attack on Saudi pipelines in June suggests there has been a steady ramp up of the power and precision of attacks. Importantly, the June operation in Iraq and that is also the most likely origin point of the weekend’s attack.

This article from SCMagazine dated August 28th details how the USA’s response, so far, has been limited to cyber warfare. These kinds of measures are not usually released until well after the fact and do not have the headline power of cruise missiles but they are effective. This new audacious drone attack now suggests Iran has regained the ability to plan and deploy drone operations. That is probably going to require a more forthright response.

Saudi Arabia has the world’s third largest military budget but expensive toys did not combat this attack. The one thing we know for sure is the attack has clearly highlighted the porosity of aerial defences and the success of unconventional warfare lacking clearly defined launch sites. Additional spending is quite likely to further fortify key pieces of energy infrastructure. Upskilling is not going to be cheap and is likely to benefit the defence sector. The iShares US Aerospace and Défense ETF broke out of an 18-month range at the end of August and continues to extend its advance. 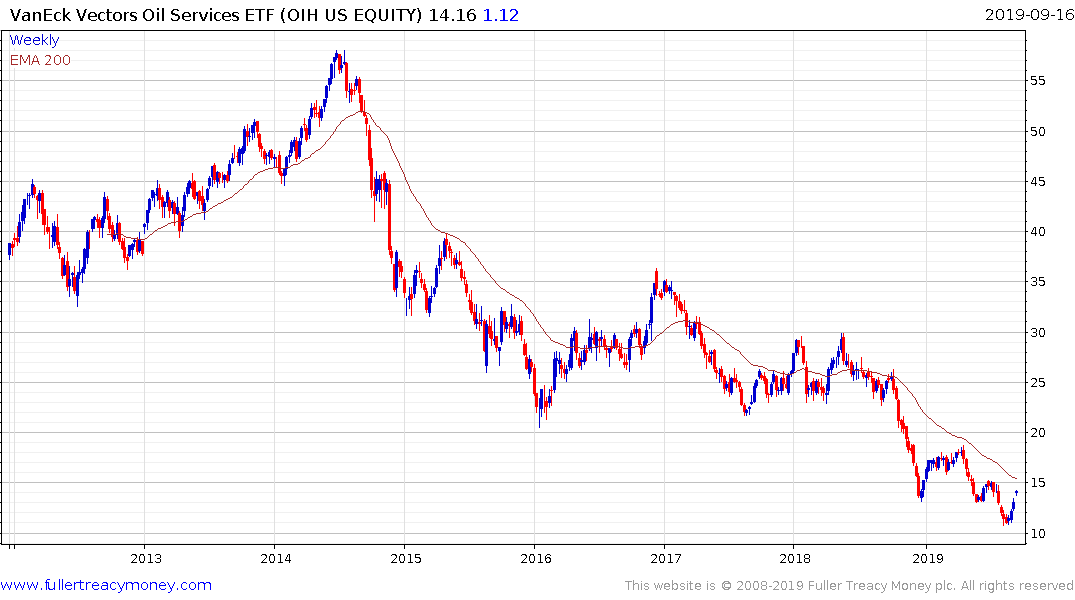 One way or another the infrastructure destroyed needs to be replaced and that is likely to benefit the oil services sector. The VanEck Vectors Oil Services ETF has been trending lower since 2014 and rallied today to challenge the sequence of lower rally highs. A sustained move above $15 would break the medium-term downtrend. 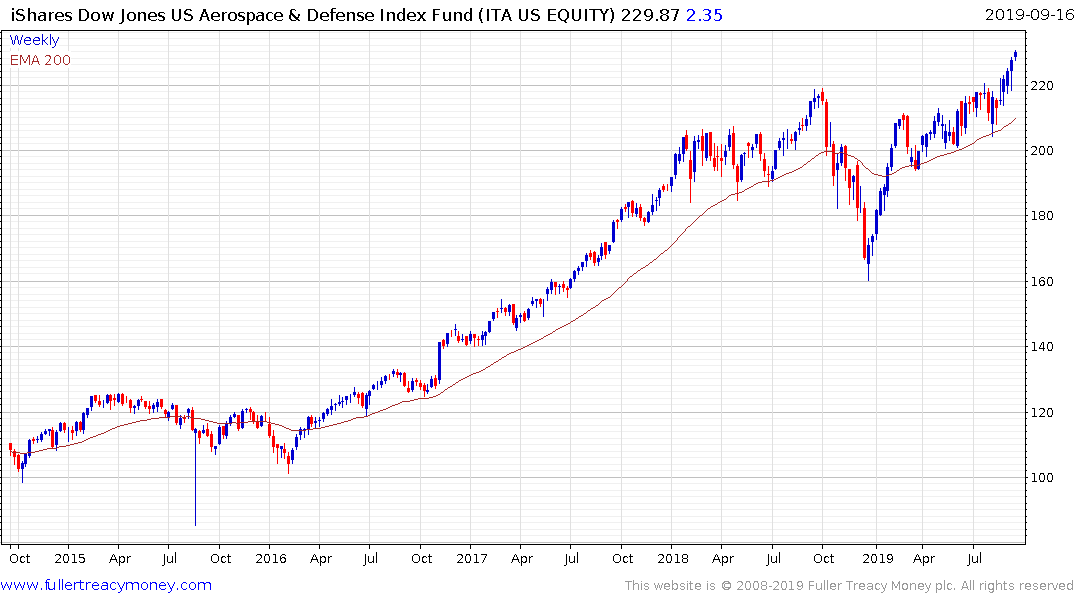 One of the points David often mentioned is that a crisis needs to be seen to be getting progressively worse for the news flow to continue to have a distorting effect on the price action. Right now, investors are weighing the risk of escalation between Saudi Arabia, the USA and possibly Israel on Iran and its proxies. Another strike is unlikely to have the same effect on supply as the first because the fat targets have already been destroyed but it would have a very damaging effect on sentiment. 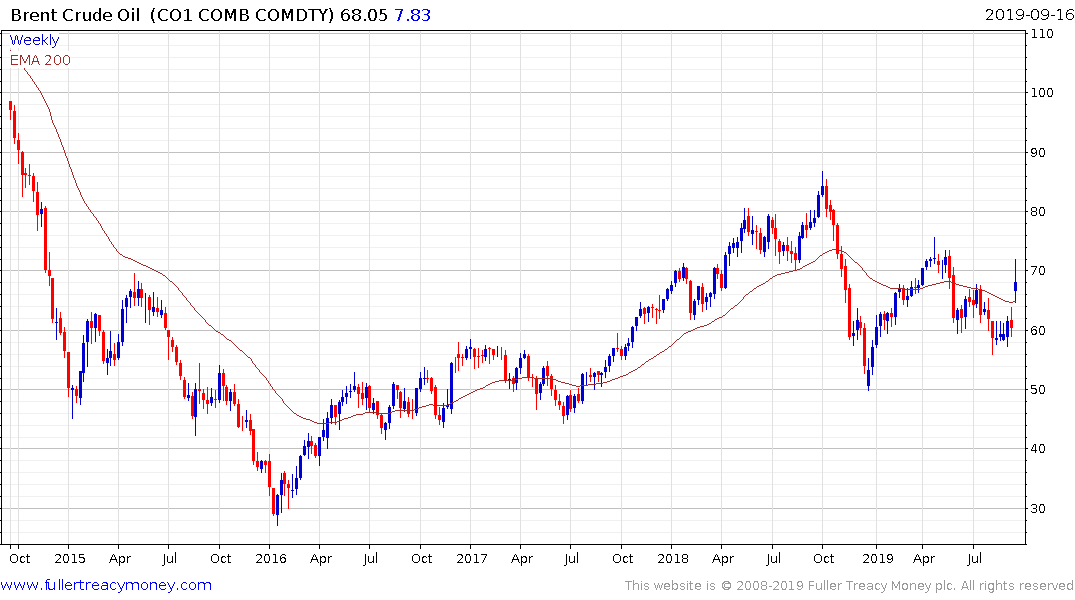 Provided the break above the trend mean is sustained we can give the benefit of the doubt to continued upside. I believe it is relevant to highlight major expansions often end with an inflation scare and surging oil prices, which act as a tax on consumption so this is a significant development to monitor.