Here is a link to the full report and section from it.

There are glaring exceptions such as Argentina and Turkey, but generally CPI inflation in 2018 has fallen to historical lows in large EM economies such as Brazil (3.6% y-o-y), India (4.3%), Indonesia (3.2%), Russia (2.6%) and South Africa (4.6%). If we extend the period back to 2017-18, these five EMs have still averaged low inflation (Figure 13). It’s unusual for so many large EMs to have a lengthy period of low inflation, considering several have had a chequered past with bouts of high or hyperinflation, and it suggests something structural could be going on. Large EM economies experiencing deflation in the next few years may have sounded bananas five years ago, but now it seems plausible.

We would start with the basic observation that these EMs already have low single-digit inflation, so it would not take much to move to deflation – but perhaps because of their record of being inflation prone, nobody’s forecasting deflation. Yet there are a number of reasons why you should not rule out deflation in some big EMs. First, most are entering 2019 with growth below trend (i.e. negative output gaps). Second, compared with DMs the CPI basket of the big EMs is weighted towards commodities, and with US shale producers ramping up their production and China’s growth slowdown set to accelerate in the spring of 2019, commodity prices could tumble further. Third, the currencies of some of these EMs depreciated to weak levels in 2018, and with Bilal Hafeez bearish on USD in 2019, EM currency appreciation could be another disinflationary force.

The final and most important reason to be prepared for EM deflation – and of a good variety – is the digital technology revolution. In our opinion it has been a powerful disinflationary force in DM, helping explain why, in a strong growth-low unemployment world, inflation has remained quiescent. As they start to grapple with privacy and security issues the digital age is maturing in DM, while in EM it is still in its infancy (Figure 14, diamonds are grey for DM, black for Asia ex-Japan and red for the rest for EM). In 201920, the digital wave should penetrate EM faster than it did in DM, as younger EM populations are quicker to embrace the digital age and leapfrog to the latest smartphones models and the next era of 5G. The digital wave should also be a more powerful disinflationary force in EM than DM because of the faster speed of penetration, empowering the consumer with more choice and pricing knowledge than ever before and cutting out the all-too-big rent-seeking middle man in EM’s archaic retail distribution systems. And while DM statisticians are playing catch-up in revamping their methodologies to update the CPI basket more frequently and better reflect increased product quality, EM statisticians lag even further behind – and these methodological changes are lowering measured CPI inflation.

The majority of emerging markets run more energy intensive economies than developed markets because of inefficiencies and the prevalence of manufacturing. At the same time, many developing economies depend on commodity exports to generate income. Therefore, the relative impact of lower commodity prices falls unevenly on different countries. 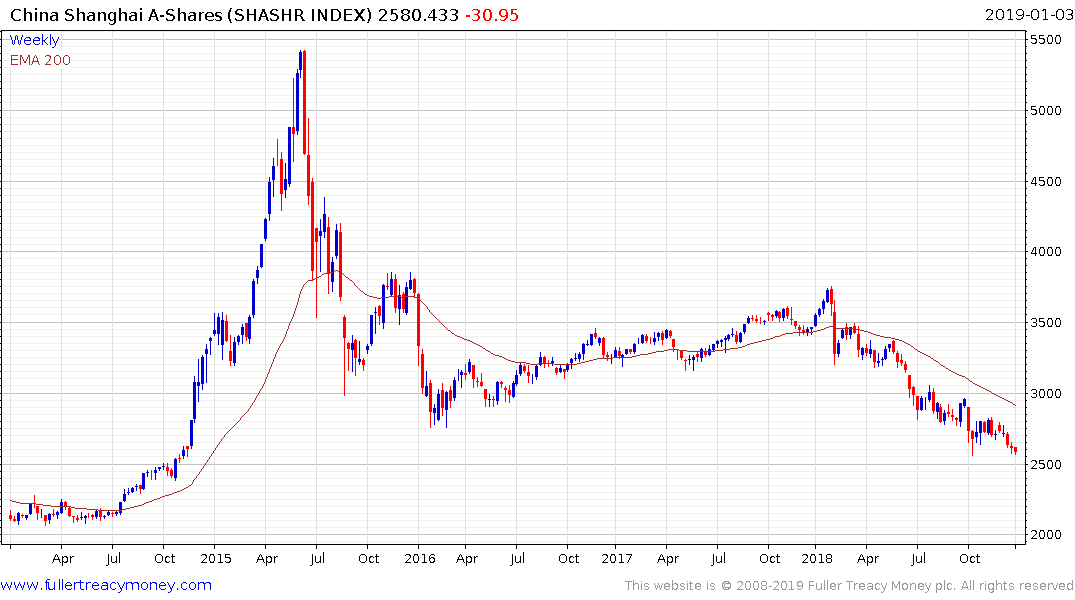 Meanwhile the clear risk of a China slowdown or even a recession, if clear remedial action is not forthcoming soon, represents a challenge for every economy not just emerging markets. China is not just a massive consumer of just about everything but represents the primary source for many forecasts for demand growth. As those expectations are pegged back, that is likely to have a contractionary effect on commodity producers of every hue. 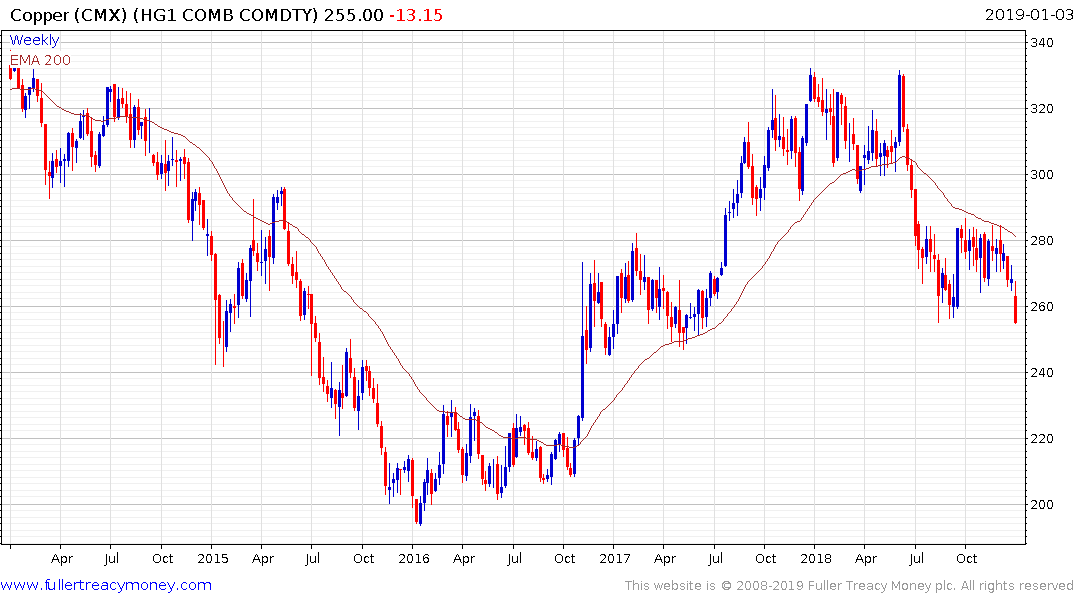 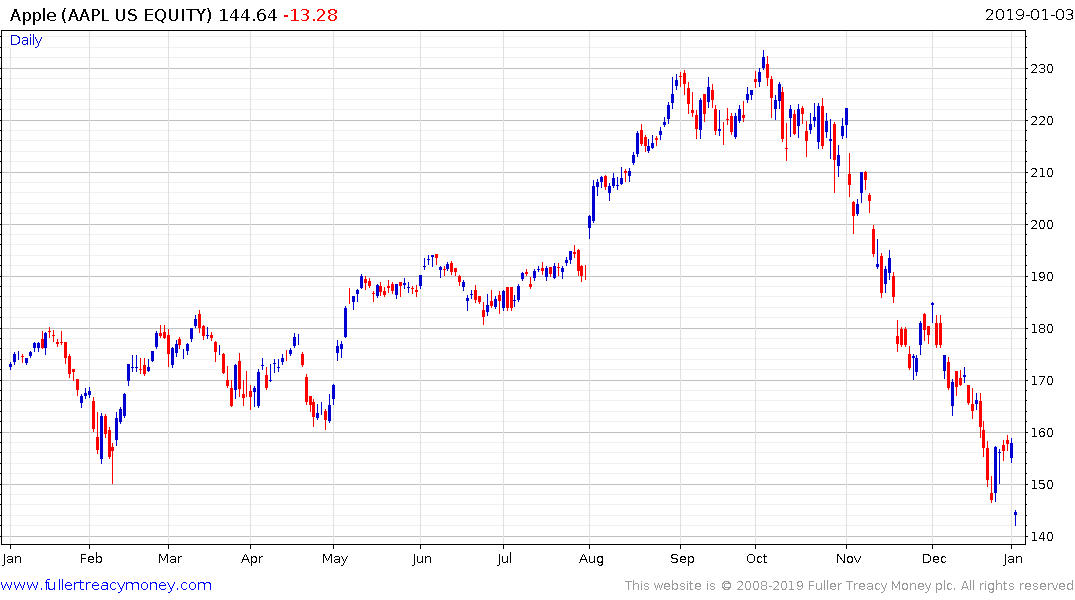 Slowing demand for Apple’s products in China and the decline in the London Metals Index both point towards a significant slowdown in China’s economy.

The biggest net beneficiaries are those who benefit from lower commodity prices but have less reliance of Chinese demand for exports. Right now, India stands out for its relative strength in that regard and has the added benefit of an impending fiscal splurge to help the BJP’s prospects in the upcoming elections. 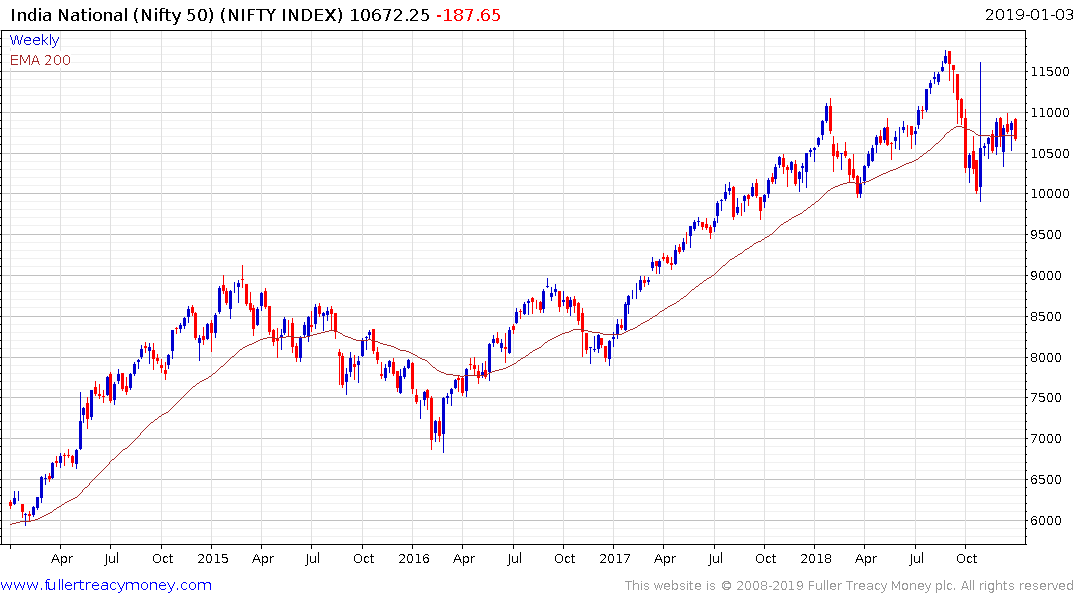 The Nifty Index has paused in the region of the trend mean and is likely to continue to ease against a background of continued investor uncertainty internationally but is a relative strength leader so is likely to be among the first to rally once conditions improve.